It is of paramount importance for any anesthesia provider to understand the basic concepts of the respiratory system and the mechanics of ventilation and gas exchange. The principles described in this chapter are put to use every day in operating rooms and intensive care units around the world. Understanding these principles can help guide clinical decision making as well as having informed discussions with other consulting services in the perioperative care of patients.

The diaphragm is the main muscle of ventilation, and, during nonstrenuous breathing, it does the vast majority of the work. A mobile central tendon that originates from the vertebral bodies, lower ribs, and sternum anchors it. As the diaphragm contracts, negative pressure is generated in the intrapleural space, causing inflow of air into the lungs. As the diaphragm relaxes, the volume within the thoracic cavity decreases and air moves out. During nonstrenuous breathing, exhalation is mainly passive. Approximately 50% of the diaphragm’s musculature is composed of fatigue-resistant, slow twitch muscle fibers (1,2).

During nonstrenuous breathing, the diaphragm does the vast majority of work and that exhalation is mainly passive.

As the work of breathing increases, more skeletal muscles become involved. The external intercostal muscles assist in inhalation, and to some degree the internal intercostal muscles provide support for exhalation. The abdominal muscles (the most important expiratory accessory muscles) contract, assisting with depressing the ribs and producing forced exhalation through an increase in intra-abdominal pressure. They are also important for generating the propulsive expiratory force involved with coughing and maintaining adequate bronchial hygiene. The cervical strap muscles (the most important inspiratory accessory muscles) help to elevate the sternum and upper chest to increase thoracic cavity dimensions. The scalenes help prevent inward motion of the ribs and the sternocleidomastoids help to elevate the upper part of the rib cage. As the work of breathing continues to increase, the large back and paravertebral muscles become involved. All of these muscles are prone to fatigue (1,2).

III. Structures of the Lung

A. Thoracic Cavity and Pleura

The lungs are contained within the bony thoracic cage, consisting of the 12 thoracic vertebrae, 12 pairs of ribs, and the sternum. The intercostal muscles lie between each pair of ribs. The diaphragm makes up the inferior border of the thoracic cavity. The mediastinum separates the lungs medially.

Each lung weighs approximately 300 to 450 g. The right lung is slightly larger than the left and has three lobes as opposed to the left’s two. Fissures separate the lobes. Each lung is composed of 10 segments, the anatomic divisions of which correspond to the branching of the proximal conducting airways. The lung parenchyma is invested by a layer of visceral pleura. The visceral pleura also covers the surfaces of the interlobar fissures. As this visceral layer is reflected back upon itself at the level of the hilum and pulmonary ligament, it becomes the parietal pleura. This pleura covers the entirety of the thoracic cage and diaphragm. A fluid layer 20 μm thick separates the two layers. This fluid layer allows for the smooth movement of the lung against the thoracic cavity as the respiratory cycle occurs (1–3).

Immediately distal to the larynx begins the trachea. A series of C-shaped cartilaginous rings support this large airway anteriorly and laterally. The posterior, or membranous, portion of the trachea lacks this rigid support structure, thereby allowing flexibility for food boluses that traverse the esophagus posteriorly.

At the distal end of the trachea lies the carina—the first branch point in the respiratory tree, beyond which lay the left and right main-stem bronchi. The right main bronchus has a significantly less acute angle of branching. This “straight shot” allows for a less circuitous path for aspirated material and is the primary reason aspiration events occur more often in the right lung.

Each lobar branch then further divides into segmental branches. The airways continue to divide for another 5 to 25 generations depending on their position within the lung. As branching progresses, the amount of cartilage contained within the wall continues to decrease. The point at which cartilage is totally absent from the airway wall is termed the terminal bronchiole and is the final conducting airway before reaching the functional unit of the lung known as the acinus.

Each acinus comprises respiratory bronchioles, alveolar ducts, alveolar sacs, and grape-like clusters of alveoli. The alveolus serves as the main point of gas exchange between lung parenchyma and the pulmonary vasculature. Approximately 300 million alveoli are present in an average adult male. In the upright position, the largest alveoli are found at the apex of the lung and the smallest at the bases. This size difference becomes less pronounced as inspiration occurs. Each alveolus is comprised mainly of type I cells, which form the majority of the epithelial surface of the alveolus, and type II cells, which produce surfactant and function as reserve precursor cells for type I cells (1–3).

Within the pulmonary system, there exist two types of vascular supply. The first is the bronchial circulation, which arises from the aorta and the intercostal arteries and is oxygenated systemic blood that provides nutrition to the tissues of the bronchi, visceral pleura, and pulmonary vasculature. It is not involved with alveolar gas exchange.

The second vascular system is the pulmonary circulation. This vascular supply takes deoxygenated systemic blood and sends it to the pulmonary capillaries for interface with the alveoli. It is here that alveolar gas exchange occurs—oxygen is absorbed and carbon dioxide is excreted. The newly oxygenated blood is then sent back into the systemic circulation for distribution to the rest of the body.

After entering the lung, the pulmonary vasculature divides along with its corresponding airway. They subdivide into arterioles, and then finally into capillaries at the level of the alveolus. As one moves past the alveolus, the vessels become venules. These eventually coalesce into lobular veins, then further on to the four pulmonary veins, two each from left and right lung. These pulmonary veins drain into the left atrium, where the oxygenated blood is then circulated systemically until it returns to the right atrium and ventricle for recirculation through the pulmonary system. It should be noted that blood in the pulmonary arteries is typically deoxygenated and the pulmonary venous blood is oxygenated. This is opposite of the systemic circulation; the nomenclature is based on which vessels arise from and return to the heart (1,2).

The generation of a breath, which allows the inflow of atmospheric air into the lungs and outflow of carbon dioxide–rich air from the alveoli, is a function of periodic changes in partial pressure gradients. The way these pressure gradients are achieved depends on whether the breath is spontaneously or mechanically generated.

When the diaphragm and intercostal muscles contract and inspiration occurs, the intrathoracic volume increases and a new intrapleural pressure is generated, approximately −8 to −9 cm H2O. Alveolar pressure also decreases to –3 to −4 cm H2O, maintaining the transpulmonary pressure at 5 cm H2O, but generating a pressure gradient between the alveoli and upper airway. This change allows for air to flow down the gradient into the alveoli and participate in gas exchange and also expands the alveoli.

When the diaphragm and intercostals relax, the intrapleural pressure returns to –5 cm H2O. Transpulmonary pressure does not support the expanded alveoli at these intrathoracic volumes, and they begin to collapse. The air flows from the alveoli out toward the upper airway and the previous end-expiratory pressures and alveolar size are reestablished.

C. Movement of the Lung Parenchyma

Both the lung parenchyma and thoracic cavity have their own elastic recoil properties. The tendency of the lungs is to collapse due to the high number of elastin fibers within the tissue as well as the surface tension at the air–fluid interface of the alveoli. The tendency of the chest wall is to move outward due to its structural makeup that resists deformation and the muscle tone of the chest wall.

A useful measure of elastic recoil is compliance. It is defined as a change in volume divided by the change in pressure:

The higher the pressure needed to produce a specific change in volume, the lower the compliance of the system and the higher is the elastic recoil of that same system.

Compliance can be calculated both for the lung and the chest wall separately. Normal lung compliance is 150 to 200 mL/cm H2O and is defined as:

Chest wall compliance is normally 100 mL/cm H2O and is defined as:

Total compliance is the combination of chest wall and lung compliances and is normally 100 mL/cm H2O. It is defined mathematically as:

Compliance can be affected by the presence of secretions, inflammation, fibrosis, fluid overload, and a host of other factors. It is a useful measure, especially in the setting of mechanical ventilation, to demonstrate worsening or improvement of lung mechanics (2,3).

There are two types of gas flow: laminar and turbulent. Both of these are present simultaneously during a respiratory cycle, although the physics of both are very different.

At flow rates below those that produce turbulent flow, gas flows through a straight, unbranched tube in a series of concentric cylinders that slide over one another. The velocity of the gas in the cylinder abutting the tube walls is zero, and the maximal flow velocity is in the innermost cylinder. Thus, gas that flows through the center of the tube reaches the end of the conduit before the rest of the tube has filled with gas. This type of flow is usually inaudible. Resistance to laminar flow is described by the following equation:

Helium is useful to decrease resistance to flow only if flow is turbulent—as one might observe during asthma. 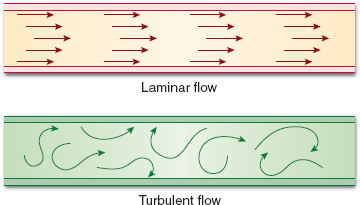 Arguably the central function of the pulmonary system is oxygen and carbon dioxide gas exchange. Ventilation, movement of gas in and out of the lungs, is essential for continued exchange to occur at the level of the alveolus and pulmonary capillary membrane. Respiratory centers in the brain normally control ventilation. As anesthetic management often alters normal ventilation, a thorough understanding of ventilatory physiology is essential to the practice of anesthesiology.

Basal ventilation is controlled by respiratory centers located in the brainstem, particularly the medulla and the pons. They process an array of information to determine a ventilation rate and pattern and are able to function independent of an intact cerebrum (4).

The medulla oblongata contains the most basic ventilation control centers, the dorsal respiratory group (DRG) and the ventral respiratory group (VRG). The DRG provides for a ventilation rate by rhythmically stimulating inspiration. The VRG, conversely, coordinates exhalation. The DRG stimulates inspiration, which is followed by a signal by the VRG to extinguish the stimulation from the DRG, halting active inspiratory effort and allowing for passive exhalation. Without the VRG, DRG activity results in an irregular breathing pattern characterized by maximum inspiratory efforts and bouts of apnea. In this manner, the DRG and VRG work in combination, resulting in rhythmic ventilation.

Respiratory centers in the medulla and pons are the primary centers of ventilation control. However, the midbrain and cerebral cortex may also affect the ventilatory pattern. For example, the reticular activating system in the midbrain increases rate and volume of inspiration with activation. Reflexes can also alter ventilation. Both the swallowing and vomiting reflex result in a cessation of inspiration to avoid aspiration. The cough reflex is stimulated by irritation of the trachea and requires a deep inspiration followed by a forced exhalation to be effective at clearing irritants. Smooth muscle spindles in the airways of lungs likely react to pressure changes from pulmonary edema or atelectasis, providing proprioception for the lung and resulting in ventilatory alterations. Golgi tendon organs, tendon spindles primarily located in intercostal muscles, are stimulated when stretched, inhibiting further inspiration. The Hering-Breuer reflex, although weakly present in humans, may also alter ventilation by inhibiting inspiration during lung distention. In this manner, reflexes and higher brain centers affect ventilation patterns established by respiratory centers in the brainstem.