I. General Principles and Equipment

Surgeons and patients often prefer regional anesthetic techniques due to their associated decreases in perioperative pain and improved discharge times. A regional block can be used in conjunction with general anesthesia to reduce the need for opioids, which cause nausea and sedation. Although these blocks require technical finesse, knowledge of the indications, contraindications, side effects, complications, as well as the pharmacology of local anesthetics is necessary to make decisions regarding which patients should receive a block.

A. Setup and Monitoring

Peripheral nerve blocks are often performed preoperatively outside the operating room. The nerve block can be placed and have time to take effect prior to the patient entering the operating room. Monitors such as pulse oximetry, continuous electrocardiogram, and blood pressure cuffs should be applied to all patients undergoing a peripheral nerve block. A “block cart” should be in the immediate vicinity and contain airway equipment as well as emergency supplies.

Motor nerves can be identified with the use of peripheral nerve stimulators with or without ultrasound imaging. The lower the current required to stimulate a specific motor response (<0.5 mA) indicates close proximity of the tip of an insulated stimulating needle to a nerve. Longer duration impulses (>0.3 ms) are more likely to cause pain by stimulating sensory nerves, while shorter duration impulses (0.1 ms) cause significantly less discomfort because the motor component of the nerve is primarily stimulated.

Ultrasound guidance has not definitively been proven to be safer or more effective, yet evidence is emerging showing that ultrasound allows for faster onset, lower doses of local anesthetics, and fewer needle passes.

The prevalence of ultrasound guidance has increased the popularity of regional anesthesia. Ultrasound allows for the visualization of nerve structures, vascular structures, and local anesthetic spread. Ultrasound guidance has not definitively been proven to be safer or more effective, yet evidence is emerging showing that ultrasound allows for faster onset, lower doses of local anesthetics, and fewer needle passes (1). To obtain the optimal view of a target nerve, a basic understanding of ultrasound physics is useful.

Differences in acoustic impedance of a structure relative to its surrounding tissue dictates whether the structure will be visible during ultrasound examination.

Ultrasound beams are sound waves beyond the threshold of hearing (>20,000 MHz). Acoustic impedance is the quality of structures allowing for visualization using ultrasound. Differences in acoustic impedance of a structure relative to its surrounding tissue dictate whether the structure will be visible. Certain structures are more likely to attenuate an ultrasound beam. For example, ultrasound waves pass easily through blood vessels (i.e., minimal attenuation), compared with bone and air, which cause of great degree of attenuation.

Once the appropriate depth is set when viewing an ultrasound image, the gain can be adjusted to brighten or darken the image. Color flow Doppler can help to identify blood vessels due to the turbulent nature of blood flow toward and away from the probe.

Higher frequency ultrasound probes have less penetration but greater resolution and are therefore useful for visualizing superficial structures including most peripheral nerves.

When orienting the needle to the probe, two different techniques have been defined: in plane versus out of plane (Fig. 21-1). The benefit of an in-plane approach is that it allows for the entire needle, including the tip, to be visualized at all times. 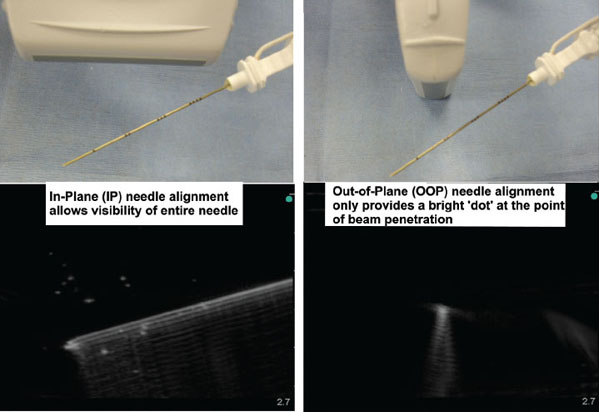 Insulated needles must be used when nerve stimulation is desired. Needles designed for peripheral nerve blocks are usually short beveled to decrease the likelihood of injuring nerves and vascular structures, in contrast to long-beveled needles intended for intramuscular injections. Although a standard insulated needle can be seen with ultrasound, specifically produced hyperechoic needles are considerably easier to view.

The best needles to use for peripheral nerve blocks are insulated, short-beveled, and hyperechoic needles.

Other complications such as hematoma formation can be minimized by avoidance of trauma to blood vessels and performing regional anesthesia in coagulopathic patients.

A. Head and Neck

Head and neck blocks can be used for a variety of procedures including carotid endarterectomy, awake craniotomy, and plastic and maxillofacial surgeries. Only a few landmark-based techniques will be discussed here.

The infraorbital block is useful for providing analgesia after cleft lip repair. This terminal branch of the maxillary division of the trigeminal nerve (V2) can be blocked by injecting local anesthetic near the infraorbital foramen inferior to the eye.

The ventral rami of the C2-4 form the superficial and deep cervical plexuses. The superficial cervical plexus comprises four nerves (supraclavicular, transverse cervical, greater auricular, and lesser occipital) and can be located posterolateral to the sternocleidomastoid at the level of the cricoid cartilage. The greater auricular and lesser occipital nerves provide sensory innervation to the lateral and posterolateral scalp, respectively.

To provide analgesia for the posterior scalp, the greater occipital nerve (dorsal rami C2) can be blocked along the superior nuchal line lateral to the occipital protuberance and adjacent (typically medial) to the occipital artery. 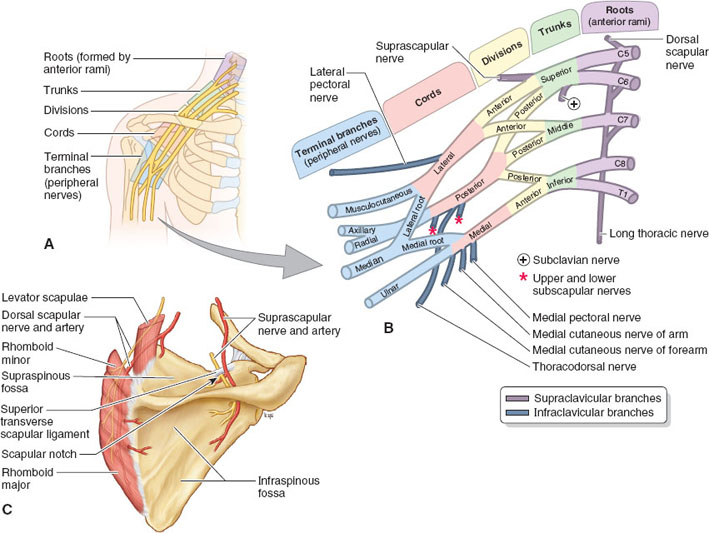 Known side effects of the interscalene block include phrenic nerve paralysis, Horner’s syndrome, and recurrent laryngeal nerve paralysis. Phrenic nerve paralysis has been reported in up to 100% of patients, yet with the introduction of ultrasound, the incidence has been reduced considerably to as low as 13% (2,3). Horner’s syndrome results from blockade of the cervical sympathetic chain, as seen in up to half of patients who receive interscalene blocks. The incidence of hoarse voice from recurrent laryngeal nerve block is on the order of 10% to 20%.

The interscalene approach targets the level of the distal roots or proximal trunks of the brachial plexus. Two of the primary nerves of the shoulder derived from the C5-6 nerve roots, suprascapular nerve and axillary nerve, are blocked by this approach. The supraclavicular nerve (C4), which provides the cutaneous innervation for the top of the shoulder, is often blocked by the interscalene approach.

The introduction of ultrasound-guided needle placement has reduced the incidence of phrenic nerve blockade from nearly 100% to as low as 13% during interscalene block.

In order to perform an ultrasound-guided interscalene block, the patient is positioned in a near-seated position of 70 to 90 degrees (Fig. 21-3). Ultrasound scanning with a high-frequency probe (7 to 10 MHz) begins above the midpoint of the clavicle where the subclavian artery is located. The nerves of the brachial plexus will be located lateral to the subclavian artery and should be traced to the level of the cricoid cartilage, which corresponds to the level of the C6 vertebrae. The needle is inserted posterior to the ultrasound probe for the in-plane approach (Fig. 21-4). 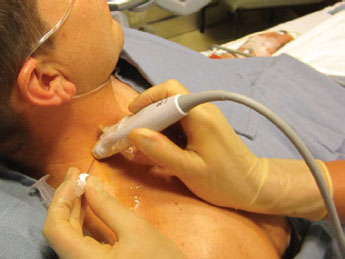 FIGURE 21-3 Positioning for the ultrasound-guided interscalene block. Patient is seated at 70 to 90 degrees. The ultrasound probe is placed at the level of the cricoid cartilage (C6) in the transverse plane with a slightly downward angle. 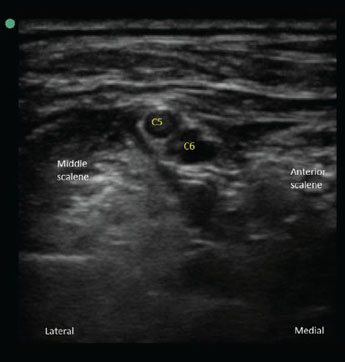 FIGURE 21-4 Ultrasound anatomy for the interscalene block. The C5-6 nerve roots can been seen between the anterior and middle scalene muscles.

When performing a landmark-based interscalene block, the interscalene groove should be palpated lateral to the clavicular head of the sternocleidomastoid at the level of the cricoid cartilage (C6). The needle should be advanced 60 degrees to the sagittal plane until motor response is obtained at the deltoid, biceps, or triceps at <0.5 mA.

To perform an ultrasound-guided supraclavicular block, ultrasound scanning begins with a high-frequency ultrasound probe at the midpoint of the clavicle with the ultrasound probe angled vertically, similar to the start of the interscalene block (Fig. 21-5). The brachial plexus appears as a bundle of “grapes” lateral and superficial to the subclavian artery (Fig. 21-6). The target location for the needle tip is posterior and slightly lateral to the subclavian artery and has been described as the “corner pocket” location (4). 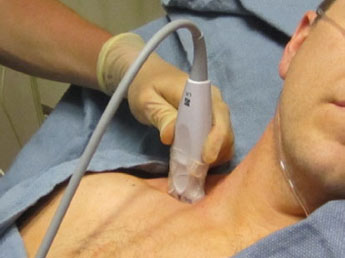