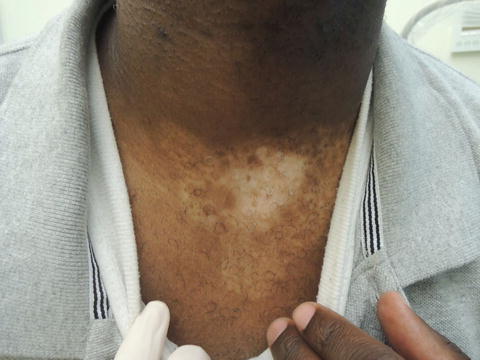 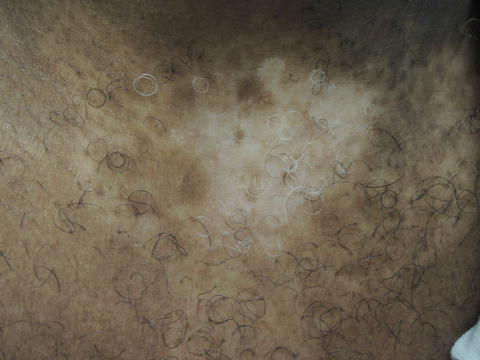 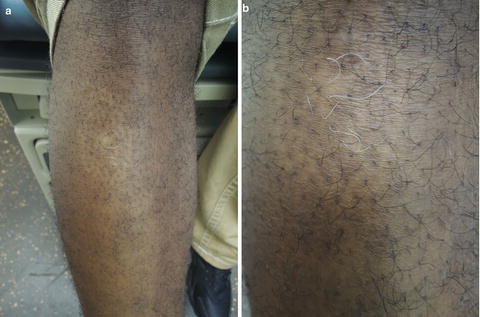 (a and b) Lesions present on extensor surface of lower leg 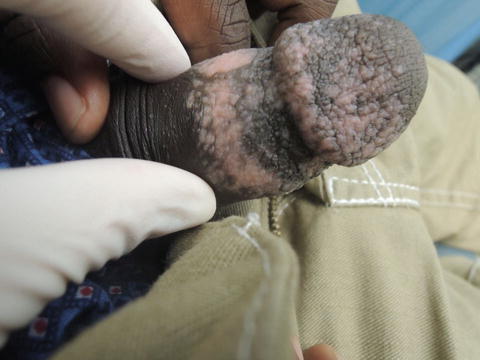 Lesions affecting the genitals can cause significant psychological distress

A 33-year-old male with past medical history of schizoaffective disorder, taking olanzapine, presented with a new hypopigmented rash on his penis. About 1 month prior, the patient had unprotected sex with a new partner. Then 2 weeks after that, he noted a red rash on his penis which was slightly uncomfortable, eventually became a scab, and then when healed was hypopigmented. It was not itchy. He had tried putting cocoa butter on it, which did not help. Prior to this incident, at around age 7, he developed a hypopigmented area on his inferior neck. At around age 12, he developed another hypopigmented area on his right shin following an abrasion.
Vitals were normal. On exam, the glans and distal shaft of his penis had well-defined scattered hypopigmented patches. His inferior neck had a 5 cm × 5 cm hypopigmented patch with white hair growing within the patch. His anterior right shin had a 5 cm × 5 cm mildly hypopigmented patch with white hair growing within the patch.
The differential diagnosis considered was vitiligo vs. hypopigmented scarring (given the history of the area scabbing before healing), and the patient was referred to dermatology for further evaluation.

The history of onset and characteristics of the patches are consistent with vitiligo. Furthermore, vitiligo is sometimes associated with a history of local trauma. This patient’s vitiligo would be considered an example of generalized or non-segmental vitiligo, as it affects his neck, leg and genital area.

Vitiligo is an acquired, idiopathic , chronic disorder of depigmentation . It is the most common cause of depigmentation worldwide and affects 0.5–1 % of the population [1, 2]. Vitiligo affects genders and races equally, and it can occur at any age. Epidemiological studies suggest the mean age of onset is 24 years, however there are mixed reports on age predominance [1, 2]. It is likely the majority of vitiligo cases present before the age of 20 years [1, 3, 4]. The exact cause of vitiligo is unknown; however, it is thought to involve multiple genetic and environmental factors. The current understanding of pathogenesis is that autoimmune-mediated processes lead to destruction of the skin’s pigment cells, the melanocytes.
Vitiligo has two distinct subtypes: generalized or non-segmental, and segmental vitiligo. Generalized vitiligo , which can involve widespread loss of pigment in patches that are often symmetrical, accounts for 85–90 % of vitiligo cases. It is associated with other autoimmune conditions, such as diabetes, rheumatoid arthritis, psoriasis, hypothyroidism and hyperthyroidism , and Addison’s disease , in 20–30 % of cases [1–4]. Generalized vitiligo shows polygenic inheritance patterns. There is a 23 % concordance rate in monozygotic twins [2]. Segmental vitiligo , which involves loss of pigment in smaller patches on one side of the body in a limited area, is thought to be a genetically distinct entity. Factors predisposing specific areas of the body to developing vitiligo include sun exposure, physical trauma, inflammation, and vitamin deficiency. Hormonal changes associated with pregnancy have also been implicated in the formation of patches [2].
Only gold members can continue reading. Log In or Register to continue