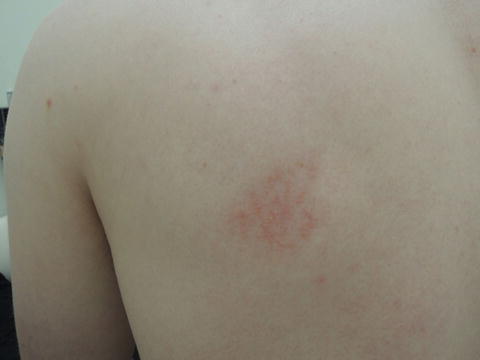 Eczematous plaque with poorly defined margins at left upper back 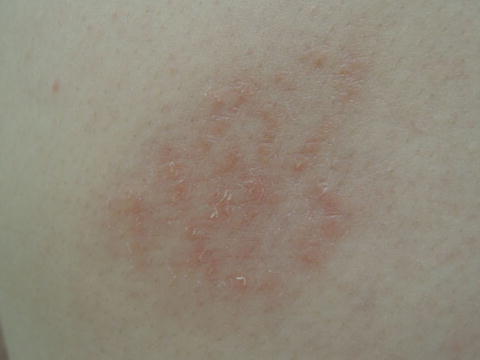 A 26-year-old male with no past medical history presented with an erythematous rash on his left upper back that had been present for 3 weeks. When it first appeared, the rash was raised and the patient’s entire back, beyond the site of the rash, was extremely itchy. The itchiness of the entire back had since resolved but the rash itself remained itchy. The patient treated the rash with mupirocin ointment for 3–4 days but it didn’t seem to help. The patient felt otherwise well.
Vitals were normal. On exam, on his left scapular area, there was a 4 cm × 2.5 cm erythematous papular rash with some scaling and some discrete 1–2 mm erythematous papules .
Although the diagnosis was uncertain, the rash was treated with a steroid cream due to its dryness and scale. The patient was advised to first try an over-the-counter hydrocortisone cream on the rash twice daily to see if that helped. If there was no improvement after 2 days, the patient was advised to switch to the mid-strength (Class IV) prescription steroid mometasone furoate cream 0.1 % once daily.

Lichen simplex chronicus is favored because of the elevated, thickened appearance of the lesion, and the history of local itchiness.

Lichen simplex chronicus, also known as neurodermatitis , is a secondary skin disorder that results from excessive scratching. The primary condition that starts the cycle is severe pruritus —which can be due to any number of underlying reasons—and the excessive scratching that results from the severe pruritus produces the thickened, leathery (lichenified) plaques of lichen simplex chronicus. Chronic scratching perpetuates the pruritus, leading to an itch–scratch cycle . Lesions can only occur in sites that are accessible for scratching. Underlying causes of pruritus have been associated with a variety of conditions, including atopy, renal insufficiency , liver failure , hypothyroidism and hyperthyroidism, HIV, and lymphoma [1, 2]. It has also been linked with increased psychopathology, particularly depression, anxiety, and obsessive-compulsive disorder although the direction of that relationship is uncertain [1, 3]. Increased heat and humidity in the environment are associated with exacerbation and increased irritation of lesions [4]. Lichen simplex chronicus is more prevalent in women than men, and tends to occur between the ages of 30–50 [1].
Only gold members can continue reading. Log In or Register to continue