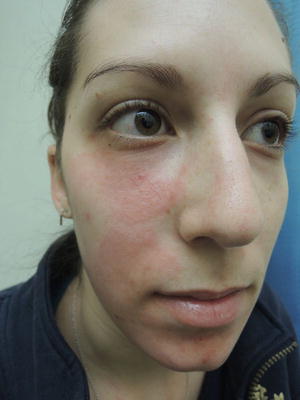 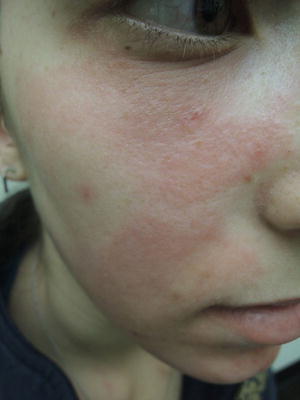 A 24-year-old female with no past medical history presented with a rash on her right cheek and chin which started 3 days prior, when she put her roommate’s Epiduo (combination retinoid and benzoyl peroxide) on two pimples on her chin. The next day, she had a large itchy red rash on her chin, right cheek, and right eyelid. She had some clobetasol 0.05 % cream which she applied to the rash, and it improved the itching but not the redness. She also took 25 mg of diphenhydramine on the day the rash appeared and the following day, and applied mupirocin to the rash as well. Despite all of this, the patient said the redness was spreading so she came in for an evaluation. She reported having a similar reaction in the past to a topical ointment (she was unsure which one) and to benzoyl peroxide.
Vitals were normal. On exam, there were erythematous, non-blanchable macular patches on her chin and right cheek, extending superiorly to the right infra-orbital area. The right supra-orbital area featured edema but no erythema. The left supra-orbital area featured slight edema.
This was treated as irritant contact dermatitis. Given that the patient had already used topical steroids without resolution, an oral steroid (6 day methylprednisolone taper pack) was added. The patient was advised to continue using clobetasol twice daily on her face for 1 week, as well as to continue the diphenhydramine daily in case there was an allergic component.

Irritant and allergic contact dermatitis can be difficult to distinguish. A thorough medical history and identification of potential allergens and irritants is necessary to arrive at a correct diagnosis. One clue is the strong temporal association between exposure to the irritant and onset of dermatitis. In this case, irritant contact dermatitis is favored as the patient reacted to a common irritant (benzoyl peroxide), and the onset of the rash occurred soon after exposure.

Irritant dermatitis (ID) is a type of dermatitis that occurs following direct injury to the outermost layer of the epidermis, the stratum corneum, caused by a chemical or physical irritant. The response involves local inflammation and is not mediated by the immune system. In contrast, allergic contact dermatitis occurs after exposure to an allergen, and it is characterized by a delayed T cell hypersensitivity response.
Only gold members can continue reading. Log In or Register to continue