The value of inhaled gases as effective pain relievers was discovered in the 1840s. Nitrous oxide was effective for analgesia and sedation, whereas diethyl ether could produce general anesthesia. Since then, several pure gases and volatile anesthetics (liquids that have been vaporized to be inhaled) have been synthesized, studied, and used in clinical practice.

The behavior of administered drugs is best described in terms of pharmacodynamics (what the drug does to the body) and pharmacokinetics (what the body does to the drug). Pharmacodynamics describes the effects of drugs on organ systems, tissues, and specific receptors. Pharmacokinetics describes the way in which drugs are absorbed upon their administration, their distribution within various body compartments, their metabolism, and their elimination or excretion.

B. Classification of Inhaled Anesthetics

Table 8-1 describes some of the properties of inhaled anesthetic agents currently in use. A partition coefficient (e.g., blood:gas or brain:blood) is expressed in various media as the solubility of these anesthetics. If a container with equal volumes of blood and air was exposed to enough isoflurane to produce a 1% concentration of isoflurane in the gas phase (1 mL isoflurane/100 mL of air) and allowed to come to equilibrium (total pressure equal in both air and blood), then 1.46 mL of isoflurane would be dissolved in each 100 mL of blood. The isoflurane would be “partitioned” between the blood and air in a ratio of 1.46:1, so the partition coefficient would be 1.46. 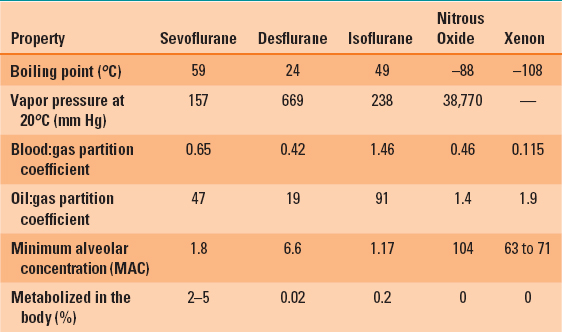 It is common to discuss the pharmacokinetic behavior of inhaled anesthetics in terms of their uptake and distribution because they are delivered to the patient by inhalation, absorbed or taken up by the blood, and then distributed to organs throughout the body (including the brain!). Furthermore, because it is difficult to measure blood concentrations of inhaled anesthetics, but relatively easy to measure the concentration, or fraction, inspired (FI), expired (FE), and in the alveolae (FA) (which is nearly equivalent to that in the blood and brain), the pharmacokinetcs of inhaled anesthetics are typically described in terms of these readily measured values.

The speed with which the alveolar anesthetic concentration rises and approaches the inspired concentration determines the speed of onset of action of the anesthetic and correlates with the rapidity of induction of anesthesia. The rise in FA/FI is faster with agents that have a low blood:gas partition coefficient (e.g., nitrous oxide, sevoflurane, desflurane). If the minute ventilation is high, as with overzealous manual or mechanical ventilation, an increased amount of anesthetic is brought to the alveoli. If cardiac output is low, as from hypovolemia, less anesthetic is carried away from the lungs and the blood becomes “saturated” with anesthetic more rapidly. As a result, the rise in FA/FI is faster, induction of anesthesia is more rapid, and unwanted side effects of anesthetics (such as hypotension) can be more profound under these conditions (Fig. 8-1). 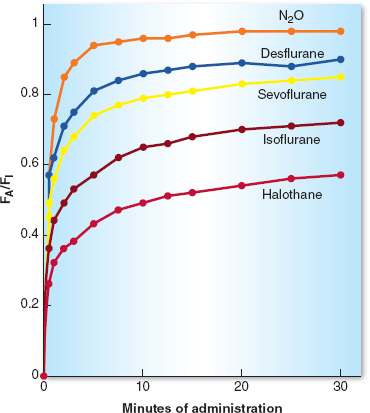 Figure 8-1 The increase in the alveolar anesthetic concentration (FA) toward the inspired anesthetic concentration (FI) is most rapid with the least-soluble anesthetics (nitrous oxide, desflurane, and sevoflurane) and intermediate with the more soluble anesthetics (isoflurane and halothane). After 10 to 15 minutes of administration (about three time constants), the slope of the curve decreases, reflecting saturation of vessel-rich group tissues and subsequent decreased uptake of the inhaled anesthetic. (From Inhaled anesthetics. In: Barash PB, Cullen BF, Stoelting RK, et al. Handbook of Clinical Anesthesia. 7th ed. Philadelphia: Lippincott Williams & Wilkins, 2013:227–251, with permission.)

Sevoflurane (alone or in conjunction with nitrous oxide) is the most common agent used for inhalational induction in children.

B. Concentration Effect and Overpressurization

Concentration effect and overpressurization refer to two similar but distinct methods used to speed up the time needed for induction of anesthesia with an inhaled anesthetic (or an increase in depth of anesthesia during an anesthetic). The concentration effect refers to the fact that the higher the FI of an inhaled anesthetic agent, the faster the rise in the FA/FI ratio. Uptake of a large volume of anesthetic by the blood causes an increase in alveolar ventilation, which in turn promotes a rapid rise of the FA/FI ratio. Although theoretically this applies to all inhaled anesthetics, practically it only has clinical relevance to nitrous oxide and xenon because they are delivered at relatively high concentrations. Overpressurization refers to the use of a higher FI than the desired FA for the patient to achieve a faster rise in the FA/FI ratio. Thus, one might use 8% inspired sevoflurane during induction of anesthesia in order to rapidly achieve the 2% alveolar sevoflurane concentration required for surgical anesthesia.

The second gas effect is more of a theoretic than practical phenomenon. It occurs when an anesthetic in high concentration, the “second” gas (e.g. nitrous oxide), is acutely added to an already inhaled low concentration “first” gas (e.g., sevoflurane). The initial, rapid uptake of a high volume of nitrous oxide (into the blood) concentrates the sevoflurane in the alveoli and results in a faster rise of the FA/FI ratio of sevoflurane. In addition, due to an uptake of large volumes of the nitrous oxide, the resulting replacement of that gas increases inspired ventilation, which also augments the concentration of sevoflurane present in the alveoli. In theory, but probably not clinically obvious, this speeds the induction of anesthesia or more rapidly deepens the level of existing anesthesia (Fig. 8-2). 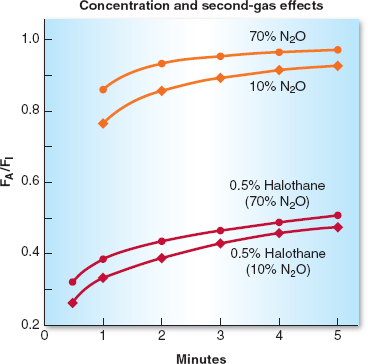 Figure 8-2 The concentration effect is demonstrated in the top half of the graph in which 70% nitrous oxide (N2O) produces a more rapid increase in the alveolar anesthetic concentration (FA)/inspired anesthetic concentration (FI) ratio of N2O than does administration of 10% N2O. The second-gas effect is demonstrated in the lower lines in which the FA/FI ratio for halothane increases more rapidly when administered with 70% N2O than with 10% N2O. (From Inhaled anesthetics. In: Barash PB, Cullen BF, Stoelting RK, et al. Handbook of Clinical Anesthesia. 7th ed. Philadelphia: Lippincott Williams & Wilkins, 2013:227–251, with permission.)

Inhaled anesthetics delivered to the alveoli diffuse into the blood and are distributed to various organs in accordance with the amount of blood flow to those organs (Table 8-2). The organs that will be exposed to the most anesthetic early will be in the vessel-rich group, such as the heart, lung, brain, and liver. These organs receive about 75% of the normal cardiac output. The second group of perfused tissues are in the muscle group (including skin) and take longer to become saturated with anesthetic. The least perfused tissues (such as fat) take the longest amount of time to become saturated with anesthetic. But they also take the longest amount of time to be rid of anesthetic when the surgical procedure is terminated. Theoretically, the anesthetic in fat could serve as a depot of anesthetic, which is slowly released back into the circulation and could prolong awakening. In reality, this is not a significant problem with modern anesthetics with low solubility in blood. The dose, duration of anesthetic, and solubility of the agent in various tissues are the primary determinants of the magnitude of this depot or reservoir.

Table 8-2 Tissue Groups and Their Perfusion

Only a small proportion of modern inhaled anesthetics undergo metabolism. Most of the anesthetic is exhaled in an unchanged state (Table 8-1). The pharmacokinetic and pharmacodynamic properties of these anesthetics are not significantly affected by their metabolism. Metabolism of halogenated hydrocarbons anesthetics, such as sevoflurane or desflurane, in the liver may be a factor in rare cases of postanesthetic hepatotoxicity.