I. Brief History and Overview

The first NSAIDs to be isolated were salicylic acid derivatives. Traditional NSAIDs inhibit prostanoid synthesis through nonspecific inhibition of the cyclooxygenase (COX) enzymes. Prostanoids are produced in response to tissue injury and inflammation, both peripherally and centrally. This contributes to peripheral pain sensitization, general pain perception, and the sickness syndrome consisting of fever, anorexia, and changes in mood and sleep patterns (1). Prostanoids are also involved in homeostatic functions in the kidneys, gastric mucosa, platelets, and central nervous system (CNS). They are derived from arachidonic acid, which is released from cell membranes during tissue injury and inflammation, and consist of prostaglandins, including prostacyclin, and thromboxane A2. Multiple enzymes are involved in the transformation of arachidonic acid into prostaglandins and thromboxane A2, including isoforms of the COX enzymes (Fig. 10-1). The characterization of the COX-2 isoform as “inducible” (by neurotransmitters, growth factors, and proinflammatory cytokines) and the COX-1 isoform as “constitutive” is based on the predominant function of each isoform. But this is an oversimplification and both isoforms have some constitutive and some inducible functions. The COX-3 isoform remains poorly understood. Although aspirin irreversibly inhibits cyclooxygenase and thus platelet aggregation (see discussion below), the other NSAIDs reversibly inhibit cyclooxygenase so that enzymatic function is restored as the drug is cleared from the circulation, leading to a dose-dependent and drug-dependent effect on platelet aggregation. 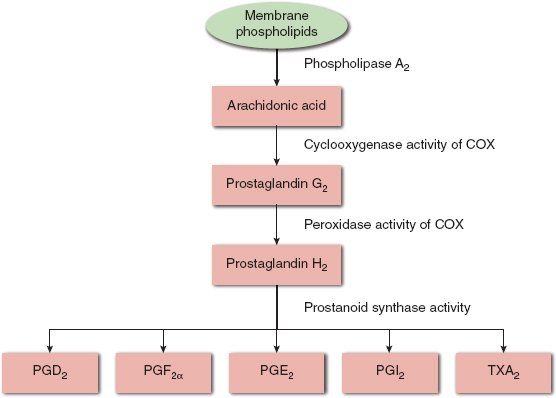 Acetaminophen (also known as paracetamol, APAP, para-acetylaminophenol, N-acetyl-para-aminophenol) is widely used as an analgesic and antipyretic for both children and adults. Although it has been reported to suppress inflammation in animals and in dental tissue, the anti-inflammatory effect is considered low to nonexistent (2). Centrilobular hepatotoxicity occurs with acute overdose and may occur at smaller doses in chronic alcoholics, although the relation between acetaminophen use and alcohol ingestion is not straightforward. Use of acetaminophen in patients with chronic liver disease who do not regularly consume alcohol is not contraindicated, although the maximum safe dose has not been determined (3). It is available in oral, rectal, and intravenous preparations. The dose is 10 to 15 mg/kg every 4 to 6 hours in children (every 6 to 8 hours in neonates) and 325 to 650 mg every 4 to 6 hours in adults. The maximum dose in children is 75 mg/kg/day and, historically, no more than 4 g/day in adults. However, due to the availability of combination products (over-the-counter cough and cold preparations and hydrocodone- and oxycodone-acetaminophen combinations) and cases of liver failure in patients taking <4 g/day, the U.S. Food and Drug Administration (FDA) requested in 2011 that manufacturers limit combination products to 325 mg. Soon after, the manufacturer changed the maximum daily dose to 3 g/day, and in 2014 the FDA asked prescribers and pharmacies to discontinue prescribing or dispensing products with more than 325 mg of acetaminophen.

In 2011 the U.S. Food and Drug Administration requested that manufacturers of acetaminophen-containing products limit those products to a maximum of 325 mg of acetaminophen per dose to decrease the chance of hepatic toxicity.

The mechanism of action of acetaminophen is unknown, although there is strong evidence for a central site of action. Multiple sites of action have been postulated, including COX-1, -2, and -3 inhibition, and modulation of the opioidergic, serotonergic, and endocannabinoid systems (2).

Acetaminophen is highly bioavailable after oral administration, and it crosses the blood–brain barrier. Time to peak effect is approximately 20 minutes (2).

The major metabolic pathway of acetaminophen is glucuronidation and sulfation in the liver. The nontoxic conjugates that are formed are largely excreted in the urine and bile. Between 5% and 9% of acetaminophen is oxidized by the cytochrome P450 (CYP) system, resulting in N-acetyl-p-benzoquinone-imine (NAPQI), the toxic metabolite that can cause hepatocellular injury if the hepatic detoxification process is overwhelmed by a large dose of acetaminophen. NAPQI is highly reactive and is rapidly metabolized by conjugation with glutathione transferase to a nontoxic compound that is eventually excreted as mercapturic acid and cysteine conjugates. Approximately 2% of ingested acetaminophen is excreted unchanged by the kidneys (3).

Acetaminophen is a dose-related hepatotoxin due to the small amount of NAPQI produced. Depleted glutathione stores due to overdose, malnutrition, or alcohol ingestion may increase the risk of hepatotoxicity. Drugs that induce the CYPs, such as anticonvulsants (phenytoin, carbamazepine, phenobarbital), and isoniazid may increase the risk of acetaminophen toxicity, although the evidence for clinically significant drug–acetaminophen interactions is incomplete. Acetaminophen poisoning was the leading cause of acute liver failure between 1995 and 2003 in the United States, with 48% of acetaminophen-related cases due to unintentional overdose (3). Fifty-one percent of patients had used a single over-the-counter acetaminophen product.

Acetylsalicylic acid (also called aspirin or ASA) can be used for relief from mild to moderate pain. It has both anti-inflammatory and antipyretic effects. Today it is prescribed most commonly for its antiplatelet effects and has indications including acute myocardial infarction, unstable angina, transient ischemic attacks, prevention of arterial and venous thrombosis, and platelet disorders. Aspirin irreversibly inhibits platelets aggregation by inhibiting platelet thromboxane A2 synthesis and by preventing adenosine diphosphate release from platelets. Its antiplatelet effect lasts for the life of the platelet (8 to 10 days) (4). Contraindications to aspirin use include the presence of gastric and duodenal ulcers, as aspirin may cause upper gastrointestinal (GI) bleeding from erosive gastritis. Enteric coating, taking aspirin and other NSAIDs with meals, histamine 2 antagonists, and proton pump inhibitors are helpful in minimizing mucosal damage. Aspirin is contraindicated in children due to the association with Reye syndrome, a life-threatening acute liver failure seen after certain viral infections. The antithrombotic effects of aspirin do not seem to be dose dependent, while the GI side effects and risk of bleeding increase with increasing doses. Therefore, a daily dose of 81 to 325 mg is prescribed for most indications (4).

Aspirin is a nonselective, irreversible COX inhibitor. It also affects the kallikrein system, decreasing granulocyte attachment to injured vessels, among other effects (4).

Aspirin can be administered orally or per rectum, with a 40% to 50% bioavailability. Aspirin has a short (15 minutes) plasma half-life, while the plasma half-life of its primary metabolite, salicylic acid, is much longer and dose dependent, between 2 and 12 hours. Of note is the difference between aspirin’s short pharmacokinetic half-life and its prolonged pharmacodynamic effects due to the irreversible platelet inhibition.

Aspirin undergoes extensive first-pass metabolism and is metabolized to salicylic acid, which has less pharmacologic activity in the liver, plasma, and red blood cells. Aspirin is highly bound to albumin. Only a small amount of aspirin is excreted unchanged in the urine; the rest is excreted as salicylic acid or glycine.

Aspirin can erode gastric mucosa, cause acute tubular necrosis secondary to decreased renal blood flow, and precipitate bronchospasm in patients with asthma or aspirin sensitivity. Because aspirin blocks the cyclooxygenase enzymes, substrate is shifted into the alternative pathway, thus increasing the generation of leukotrienes. Aspirin overdose may present with acid-base abnormalities, renal failure, dehydration, abnormal blood glucose, seizures, or coma. These patients require management in the intensive care unit with alkaline diuresis to promote salicylate excretion and may require hemodialysis. Activated charcoal may prevent absorption of aspirin after overdose.

Nonselective NSAIDs (nsNSAIDs) carry a side-effect profile that includes dose-related inhibition of platelet aggregation, GI bleeding, renal dysfunction, altered bone healing, hypertension, and bronchospasm. The COX-2 inhibitors were developed in an attempt to eliminate some of these adverse effects, particularly the GI side effects and interference with platelet aggregation. In 2004, the manufacturer voluntarily withdrew rofecoxib from the market after an interim analysis of a long-term study in patients with colon polyps demonstrated an increased risk for cardiovascular events, including myocardial infarction and stroke. For similar reasons, the FDA asked the manufacturer to voluntarily withdraw valdecoxib from the market in 2005. Celecoxib, with its intermediate levels of COX-2 selectivity compared with rofecoxib and valdecoxib, remains the only COX-2 inhibitor available in the United States. The FDA groups all NSAIDs, whether COX-2 selective NSAIDs or nsNSAIDs, together with regard to skin, cardiovascular, renal, and GI side effects.

The rate of upper gastrointestinal complications is highest with ketorolac compared with other nonsteroidal anti-inflammatories and therefore it should not be used for more than 5 consecutive days.

Ibuprofen, ketorolac, and celecoxib are indicated for pain, inflammation, and fever. When used in the perioperative period, nsNSAIDs demonstrate an opioid-sparing effect. Thus, they decrease the common opioid side effects such as postoperative nausea and vomiting, constipation or ileus, and cardiorespiratory depression (5). Because celecoxib has no effect on platelet function, it is especially useful in the perioperative period. Ketorolac is generally considered to be contraindicated in tonsillectomy, adenoidectomy, total joint replacements, and major plastic surgery because of the increased risk of bleeding on the “raw” surface areas. Note, however, that in the studies demonstrating increased blood loss, ketorolac had been administered pre-emptively, either before surgical incision or before achieving primary hemostasis. No controlled studies in the peer-reviewed literature demonstrate an increase in blood loss when ketorolac was administered near the end of surgery or postoperatively (5). A 2013 meta-analysis published by the Cochrane Collaboration found both an increased and decreased risk of bleeding after pediatric tonsillectomy. It concluded that although there is insufficient evidence to exclude an increased risk of bleeding when NSAIDs are administered during pediatric tonsillectomy, the use of NSAIDs did confer the benefit of a decrease in postoperative vomiting (6). Concerns about bone healing from animal models and human experiments have long limited the use of NSAIDs in orthopedic surgery. However, a meta-analysis revealed no increased risk of nonunion associated with NSAIDs and spinal fusion surgery when only high-quality studies were included (5). Other studies show poor fracture healing when nsNSAIDs as well as COX-2 inhibitors are used. Some experts advocate avoiding NSAID use in patients or procedures with a high risk of nonunion.

Ibuprofen and ketorolac are contraindicated in patients with renal insufficiency, as even short courses (<5 days) can produce transient reductions in renal function. This transient reduction is clinically unimportant in patients with normal preoperative renal function, and there are no reports of renal failure when ketorolac was administered for ≤5 days (5). Celecoxib appears to have the same rate of renal dysfunction as the nsNSAIDs. Celecoxib is contraindicated after coronary artery bypass surgery because it is associated with a greater overall risk of adverse events compared with placebo. Celecoxib is also contraindicated in patients with active gastrointestinal bleeding, history of allergy to sulfonamides (due to the presence of a sulfa moiety), and history of asthma or allergic-type reactions to NSAIDs. However, celecoxib has no effect on platelet function or bleeding time.

Ibuprofen has close to 100% oral bioavailability and a time to peak effect of 1 to 2 hours. Seventy percent to 90% of the dose is excreted within 24 hours. It is highly protein bound, as are the other conventional NSAIDs. Protein binding may be an important determinant in its distribution into the synovial fluid, thus, its efficacy in rheumatoid arthritis. Ibuprofen distributes into the cerebrospinal fluid and has a longer half-life in the cerebrospinal fluid than in the plasma.

Elimination and metabolism of NSAIDs occur largely through hepatic biotransformation and renal excretion. Patients with hepatic and renal disease may have higher and more prolonged plasma concentrations. Ibuprofen is oxidized by the CYP enzymes, as well as conjugated with glucuronic acid in the liver. The drug and its metabolites are rapidly excreted in both urine and feces. Excretion in breast milk is minimal, and the American Academy of Pediatrics considers ibuprofen to be compatible with breastfeeding. Ketorolac is metabolized by glucuronidation, and more than 90% is excreted in the urine within 2 days. Celecoxib undergoes biotransformation to carbolic acid and glucuronide metabolites, which are excreted in urine and feces. It is metabolized by the CYP enzymes and has an elimination half-life of about 11 hours.

The nsNSAIDs carry a side-effect profile that includes dose-related inhibition of platelet aggregation, GI bleeding, renal dysfunction, bone healing, hypertension, and bronchospasm. Short-term (<5 days) use of ketorolac does not increase the risk of perioperative complications, except the risk of bleeding in high-risk surgeries with raw surface areas (tonsillectomy or adenoidectomy, major plastic surgery, total joint replacement). Ketorolac demonstrates a high rate of GI ulceration, which limits its use to <5 days.