Initial basic management includes patient and family education, dietary and fluid advice, regular bowel habit training, and medical treatment including antidiarrheals and stool-bulking agents like fiber (Omar and Alexander 2013). Simple exercises (pelvic floor muscle training or PFMT) to enhance awareness and strengthening of the external anal sphincter and levator ani muscles can be initiated in the primary care setting. PFMT is a simple and low-cost management option but with a weak evidence to support its efficacy (Christensen et al. 2006). Small retrograde enemas and suppositories are used in some patients for improved bowel emptying and reduced rectal soiling. Regular enemas using a special apparatus have been reported to be very effective in patients with spinal cord injury with severe constipation resulting in overflow FI (Heymen et al. 2009).
Figure 11.1 summarizes the initial management of FI. 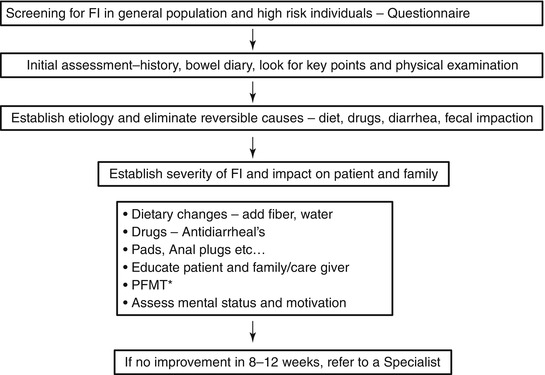 Basic management of fecal incontinence. *PFMT pelvic floor muscle training
When symptoms persist or worsen despite 8–12 weeks of conservative treatment, the patient should be referred to a specialist with interest in management of FI. Aim is to assess and identify the patients who can benefit from surgical or more invasive options. Earlier referrals should be made when patients present with severe symptoms or when patients present with multiple problems like combined fecal and urinary incontinence and/or pelvic organ prolapse.

A transdisciplinary approach is preferable to diagnose the cause and assess the severity and impact of FI before any treatment is initiated. All members of the team could work together to determine the most effective plan of care, and each provides a unique role in the team. Specialist assessment of FI is based on investigations in selected patients to quantify the severity, impact on quality of life, and likely available management options. General fitness for surgery and mental well-being should be ascertained in all patients before any invasive treatment. Most patients will need inspection of the colon and anorectum with flexible sigmoidoscopy or full colonoscopy preceding specific tests for FI.
Anorectal manometry and neurophysiologic studies like pudendal nerve terminal motor latency (PNTML) are the first-line tests to study the physiology of defecation and continence (Jones et al. 2007; Simpson et al. 2006). Anorectal manometry provides information on resting pressure, squeeze pressure, and rectoanal inhibitory reflex but does not reliably demonstrate the integrity of anal sphincter complex. Endoanal ultrasound (EAUS) using sophisticated 3D software programs and transperineal ultrasound (TPUS) reliably assess the integrity and structure of anorectal sphincter complex (Christensen et al. 2005). EAUS has better diagnostic specificity and sensitivity when compared with digital examination. Magnetic resonance imaging (MRI) with endoanal coil is used as an alternative but is more expensive and in our opinion should be used in more complex cases to demonstrate additional information like pelvic organ prolapse, etc. Defecography is used to measure the anorectal angle, evaluate pelvic floor descent, and detect occult or overt rectal prolapse that could cause FI. MRI defecography (also known as dynamic MR imaging) is an alternative which provides additional information on full static and dynamic imaging of the pelvic organs and pelvic floor components (Hetzer et al. 2006).
Biofeedback involves specific retraining of pelvic floor and abdominal wall muscles and is initiated as a first-line specialist management in most patients with FI (Byrne et al. 2007). Patients are trained to improve the control of these muscles by electromyographic stimulation under the supervision of a trained pelvic floor physiologist or a physiotherapist. Biofeedback may improve FI by enhanced contraction of the striated pelvic floor muscles and improvement in the ability to perceive rectal distension and improved coordination of the sensory and motor components required for continence. However, the role of biofeedback in FI is unsettled as the rates of success show a considerable variation in published literature (Norton et al. 2000; Madoff et al. 2004). Despite lack of unequivocal evidence, many guidelines still recommend biofeedback as “safe and effective” and its use in patients with weak sphincters and/or impaired rectal sensation (Rao 2004; Landefeld et al. 2008).
Failure of biofeedback to relieve symptoms and improve quality of life paves way for discussion of surgical or invasive options with the patient. Multiple surgical options including anal sphincteroplasty, levatorplasty, anal encirclement, implantation of an artificial anal sphincter, and muscle transfer procedures with or without electrical stimulation have been described (Christiansen 1998; Madoff et al. 1999; Grey et al. 2007). Most have become redundant with the introduction of sacral nerve stimulation (SNS). For instance with sphincteroplasty, the initial reported success rates of more than 90 % have been shown to drop significantly in studies with longer follow-up (Zorcolo et al. 2005). The role of anal sphincteroplasty is currently debated due to poor long-term efficacy and recent evidence reporting success of sacral nerve stimulation even in patients with larger sphincter defects (Matzel et al. 1995).
SNS involves low-grade electrical stimulation of sacral nerve roots via an electrode inserted in close vicinity through the third or fourth sacral foramen and connected to an implanted stimulator (Chan and Tjandra 2008). It has the unique advantage of a test phase before implanting a definitive stimulator. However, it is recognized as a high-cost, high-maintenance therapy. The mechanism of action remains unclear, but there is enough evidence to support the use of SNS as a first-line option of surgical management of FI. Two randomized controlled trials and multiple prospective trials have shown that the use of SNS in FI was associated with a significantly greater improvement in incontinence episodes and quality of life (Tjandra et al. 2008). SNS has been in use in Europe since 1995 and was approved by FDA in 2011 for the treatment of FI in patients who have failed or are not candidates for more conservative treatments. Posterior tibial nerve stimulation (PTNS), an outpatient treatment, has also been proposed as a low-cost and less-invasive alternative to SNS and has been reported to improve FI at least in short term (Hotouras et al. 2012).
Several injectable or bulking agents have been used to augment the sphincters including autologous fat, polytetrafluoroethylene (PTFE), silicone, carbon beads, etc., with moderate success (Maeda et al. 2013). Recently, a novel bulking agent anal Gatekeeper(™) (polyacrylonitrile cylinders) inserted around the anal canal has been shown to be safe and reliable with clinical improvement in FI (Ratto et al. 2011). Magnetic anal sphincter is a new option for augmenting the anal sphincters, and recent evidence supports its use in selected patients (Mantoo et al. 2012; Barussaud et al. 2013).
With the possible exception of SNS, recommendations for use of other options in FI are mostly based on case series or reports, and there is very little evidence based on randomized controlled trials. Well-designed randomized trials are desired to evaluate each of these surgical options as well as compare surgical and conservative options of management. Re-routing of fecal stream by creating a stoma is the last resort in some patients. Based on the current available evidence, Fig. 11.2 summarizes the specialist management in patients with FI. 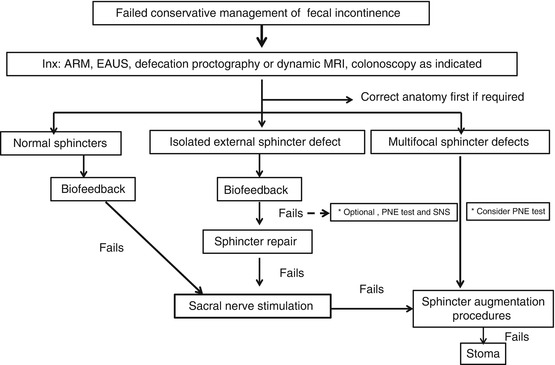