The patient is troubled with an intensely pruritic rash that often consists of raised lesions that develop into vesicles and are usually formed in a streaked or linear pattern. Eventually, there is a weeping, honey-colored crust, confluence of vesicles, and, sometimes, large bullae (Figure 182-1, A and B). If involvement is severe, there may be marked edema, particularly on the face, periorbital areas (Figure 182-2), and genital areas. The thick protective stratum corneum of the palms and the soles generally protects these areas. Inflammation usually peaks in 5 days, evolving into a subacute phase in which the swelling and blistering subside, replaced by drier crust and scaling. Redness and itching persist. Secondary bacterial infection can develop, often caused by the patient’s scratching. 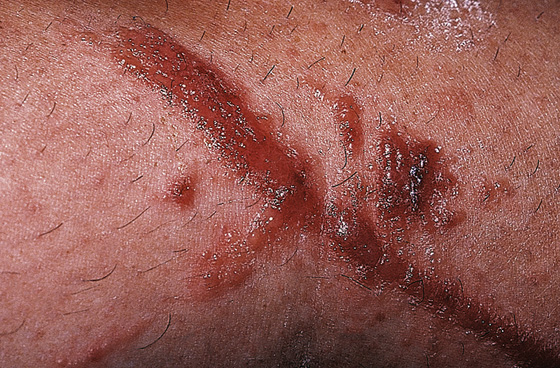 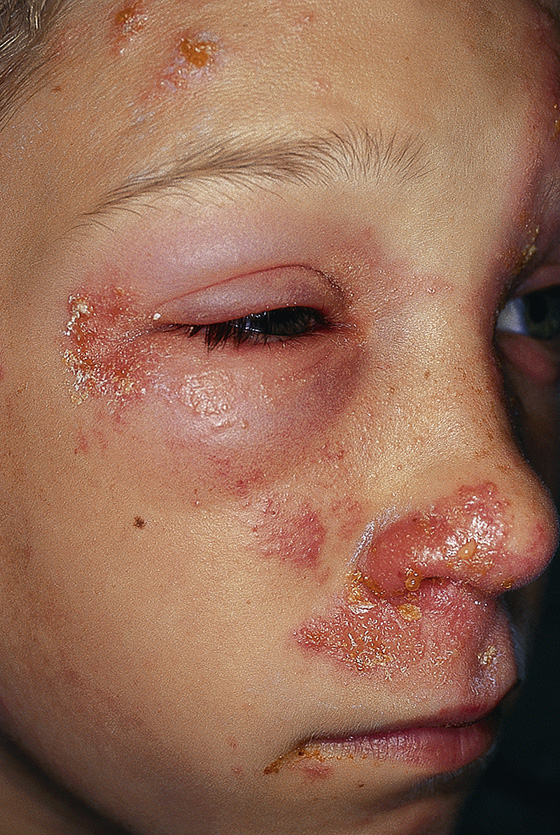 Figure 182-2 In addition to crusted and weeping plaques, there is periorbital edema in this case of acute allergic dermatitis to poison ivy. (From Bolognia J, Jorizzo J, Rapini R: Dermatology. St Louis, 2003, Mosby.)

The patient is often not aware of having been in contact with poison ivy, oak, or sumac but may recall working in a field or garden from several hours to 4 days before the onset of symptoms. In general, the shorter the reaction time, the greater is the degree of the individual’s sensitivity, which decreases with age. Most cases of Toxicodendron dermatitis begin to dissipate after 10 to 14 days.

If it is available, have the patient cleanse all affected areas with Zanfel Poison Ivy Wash (www.zanfel.com), an over-the-counter (OTC) product that can actively bind the allergen, reduce its load in the skin, and provide some relief from the itching.

To reduce pruritus, have the patient apply cool or cold compresses of aluminum subacetate (Burow solution; Domeboro Powder Packets [2 packets in 1 pint of refrigerated water]) for approximately 20 minutes every 3 to 4 hours (more often if needed for comfort). Anything that cools the skin, including ice, will reduce itching.

Small areas on the trunk or extremities can be treated with potent topical steroids, such as fluocinonide (Lidex) or desoximetasone (Topicort) 0.05% cream or gel, two to three times per day, after using cool compresses. Topical steroids can be enhanced at night with an occlusive plastic (Saran) wrap dressing. A severe local reaction can be treated with clobetasol (Temovate) 0.05% cream bid, a very powerful topical steroid. These severe reactions may require 2 days of application before itching subsides significantly. These agents must be continued for 2 weeks or the dermatitis will reappear.

Diphenhydramine (OTC, Benadryl) or hydroxyzine (Atarax, Vistaril), 25 to 50 mg PO q6h, may help mild itching between application of compresses but will probably provide nothing more than a soporific effect. There is no evidence to support the efficacy of nonsedating antihistamines.

Tepid tub baths with Aveeno colloidal oatmeal (one cup in half-full bathtub) or cornstarch and baking soda (1 cup of each in half-full bathtub) will provide soothing relief for more extensive lesions. To prevent ground oatmeal from caking in pipes, place it in a tied sock before dropping it into the bathtub.

When there is involvement of the face, eyes, hands, or genitalia; when there are severe generalized reactions or a history of severe reactions; or when the patient’s livelihood is threatened, early and aggressive treatment with systemic corticosteroids should be initiated. Prednisone (60 to 80 mg [approximately 1 mg/kg] per day, tapered over 2 to 3 weeks) will be necessary to prevent a late flare-up or rebound reaction. One 40-mg dose of triamcinolone acetonide (Kenalog) intramuscularly will be equally effective. For pediatric patients, use prednisolone syrup, 15 mg/5 mL (Prelone), 1 mg/kg/day, tapered over 2 to 3 weeks.

Inform patients about preventing future exposures by using IvyBlock, an OTC lotion containing bentoquatam 5%, which binds with plant allergens, preventing them from penetrating the skin. This is of no use for patients who already have a rash.

Avoidance of the offending agent is the key to prevention. Instruct patients regarding how to recognize poison ivy and its close relatives (Figures 182-3 to 182-5). Also have them cover up in the future with long pants, a long-sleeved shirt, vinyl gloves, and boots. They should wash with water (and soap if available) immediately after suspecting contact with a Toxicodendron. After 10 minutes, only 50% can be removed; after 15 minutes, only 25%; after 30 minutes, only 10%; and after 60 minutes, none of the urushiol can be removed using soap and water. After 60 minutes, Zanfel may be the only cleansing agent that can effectively bind and remove Toxicodendron sap from the skin. 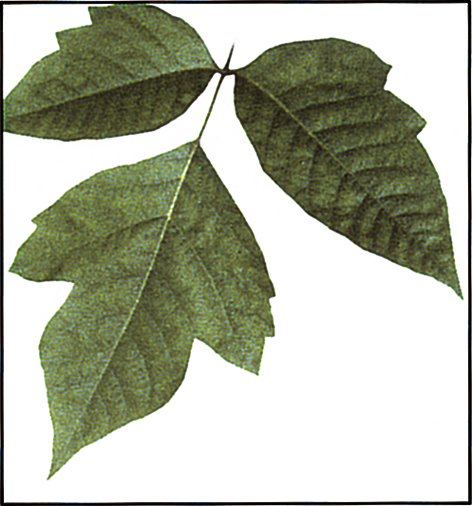 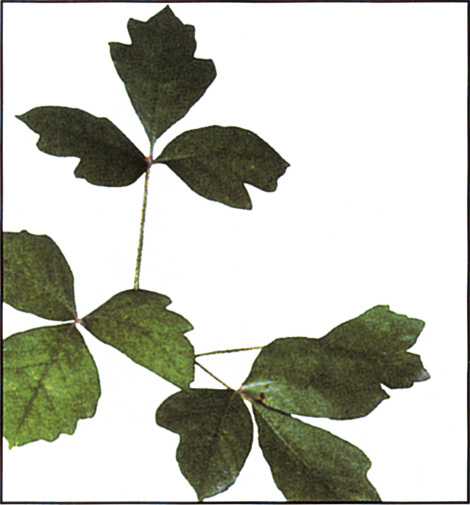 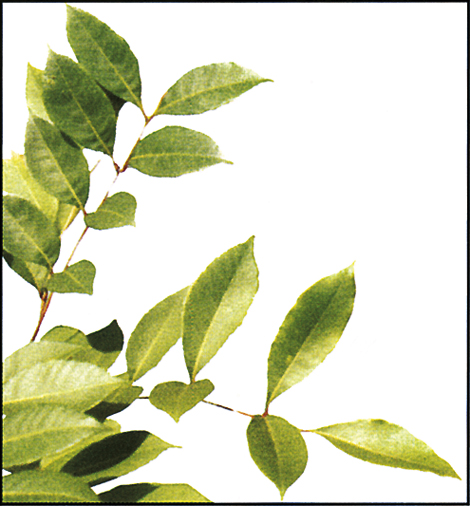 Although hyperpigmentation can occur in dark-skinned individuals and may last a few weeks after resolution of the dermatitis, patients can usually be reassured that even severe lesions will not leave any visible skin markings when healing is complete. Scarring occurs only if scratching leads to damage beneath the epidermis.

Do not have the patient use heavy-duty skin cleansers, alcohol, or other strong solvents to remove any remaining antigen. This would be ineffective and may do harm. Strong soap and scrubbing merely irritate the skin and are not more effective than mild soap and gentle washing.

Do not try to substitute prepackaged steroid regimens (Medrol Dosepak, Aristopak). The course is not long enough and may lead to a flare-up.

Do not allow patients to apply fluorinated corticosteroids, such as Lidex or Valisone, for more than 3 weeks to the face or intertriginous areas, where they can produce thinning of skin and telangiectasias. A 10- to 14-day course should not be a problem. Any significant involvement of the face should be treated with systemic corticosteroids.

Do not institute systemic steroids in the presence of severe secondary infections, such as cellulitis or erysipelas. Also, do not start steroids if there is a history of tuberculosis, peptic ulcer, diabetes, herpes, or severe hypertension without careful monitoring and/or specialty consultation.

Do not recommend OTC topical steroid preparations. They are not potent enough to be effective.

Do not prescribe topical steroids if systemic steroids are being given. They should no longer be necessary.

Do not recommend the use of topical antihistamines (which do not reduce itching) or topical benzocaine because of the added risk for the development of a second allergic contact dermatitis. Topical antibiotics with neomycin should be avoided for the same reason.

Poison ivy is the most ubiquitous of the four species of the Toxicodendron genus of the Anacardiaceae plant family, which also includes poison sumac and two species of poison oak. In the United States, these four species of plants are responsible for more cases of allergic contact dermatitis than all other contact allergens combined. The strongly sensitizing allergen of Toxicodendron plants is urushiol, a catechol derivative found in the plants’ sap. It is also found in the Japanese lacquer tree, mango rinds, cashew shell oil, and the seed coat of the ginkgo tree. When exposed to oxygen, urushiol easily oxidizes and, after polymerizing, becomes a shiny black lacquer. Urushiol is found not only in the leaves but also in vines (aerial roots), stems, and root systems.

This is an allergic contact dermatitis that is T cell–mediated and develops in genetically susceptible individuals following skin contact with urushiol. This allergen induces sensitization in more than 70% of the population, may be carried by pets, and is frequently transferred from hands to other areas of the body that may, unfortunately, include the genital area. Broad areas of redness and dermatitis are generally the result of rubbing. There is always pruritus, which most often is intense. If there is no itching, it is almost certainly not Toxicodendron dermatitis.

The gradual appearance of the eruption over a period of several days is a reflection of the amount of antigen deposited on the skin and the reactivity of the site, not an indication of any further spread of the allergen. The vesicle fluid is a transudate, does not contain antigen, and will not spread the eruption to elsewhere on the body or to other people. The rash only seems to spread because different areas of the body have different thicknesses of stratum corneum, leading to different rates of absorption of antigen and, therefore, different rates of eruption. The allergic skin reaction usually runs a course of about 2 weeks, sometimes longer, and is not shortened by any of the previously mentioned treatments (except possibly in the case of Zanfel). The aim of therapy is to reduce the severity of symptoms. It is not currently clear whether we are able to shorten the course of this reaction. Those skin areas with the greatest degree of initial reaction tend to be affected the longest. In a dry environment, the allergen can remain under fingernails for several days and on clothes for longer than 1 week.

Urushiol is degraded by soap and water. Once urushiol touches the skin, however, it begins to penetrate in minutes. It is completely bound to the skin within 8 hours and is probably no longer affected by normal soap and water after 1 to 6 hours. Zanfel Poison Ivy Wash is an OTC soap mixture of ethoxylate and sodium lauryl sarcosinate surfactants that is claimed, by its manufacturer, to render urushiol totally inactive by complementing the polarity of the urushiol to form a micelle. This is said to allow the urushiol to be rinsed away with water at any point during the dermatitis cycle. During the first 3 days, multiple washings may be necessary. Clinical trials to support the manufacturer’s claims are in progress. A 1-ounce tube costs approximately $40.00 and is supposed to be enough for 15 applications to an area the size of an adult forearm. The manufacturer also claims that often Zanfel will eliminate the itching of Toxicodendron dermatitis with no further treatment. Zanfel is specific for urushiol; it does not work on other causes of allergic contact dermatitis.

Washing skin immediately after exposure can abort the rash. Washing clothes in a standard washing machine will inactivate the antigen remaining on the patient’s clothing, as long as they have no black lacquer deposits causing visible staining. Shoes, tools, and sports equipment may require separate cleansing and can be the source of late spread. They should at least be rinsed with copious amounts of water. Pets suspected of harboring urushiol should be bathed.

Poison ivy dermatitis can sometimes be confused with phytophotodermatitis, which is a nonallergic skin reaction to psoralens, which react with ultraviolet (UV) light to cause blister formation and burning pain in the skin rather than pruritus. The most common causes are lime juice, weeds, or plants of the Apiaceae family (parsley, celery, parsnip) and other members of the Rutaceae family (includes citrus fruits). Redness, swelling, blisters, and bizarre configurations appear 24 hours after contact with the psoralens and ultraviolet light from the sun or a tanning booth. Within 1 to 2 weeks, patients will develop dark streaks wherever the initial rash occurred. This color will last for months to years, and the involved skin will often remain very sensitive to UV light.