Small, moderate-velocity metal fragments can be released when a hammer strikes a second piece of metal, such as a chisel. The patient has noticed a stinging sensation and a small puncture wound or bleeding site and is worried that there might be something inside. A BB projectile will produce a more obvious but very similar problem. Another mechanism for producing hard radiopaque foreign bodies is puncturing with glass shards, especially by stepping on glass fragments or receiving them in a motor vehicle collision. Falling onto gravel can also force sharp fragments under the skin through a small puncture wound. Physical findings will show a puncture wound and may show an underlying dark discoloration or a palpable foreign body (FB).

Obtain a thorough mechanism of injury history, and determine if the patient suspects that there is a foreign body in the wound or has a foreign body sensation. A high index of suspicion for occult foreign bodies is advised in cases of seizure, syncope, abuse, and assault, as well as in self-inflicted wounds.

Examine the wound, inspecting it and palpating over any puncture, looking for discoloration, inordinate pain, or the sensation of an underlying object (by either the patient or the examiner).

When there is any suspicion of an underlying FB, obtain radiographs of the wound to document its presence and location. If there is any possibility that the FB may be radiolucent (such as wood, plastic, aluminum, plant thorns, or spines), ultrasonography or CT scanning must be used to rule out an underlying object (see Chapter 153). CT should also be used to locate or rule out FBs located in potentially dangerous sites (such as intraorbital or intraocular).

Clearly visible and palpable embedded objects, such as windshield glass in the forehead or gravel in a knee, can usually be grasped with fine, smooth forceps and simply picked out of the puncture wound.

When the FB is lost down a narrow tract and is not visible, a different approach is required.

Explain to the patient how difficult it often is to remove a small metal fleck that is stuck in or under the skin. Inform him that often these are left in without any problem (like shrapnel injuries).

For all small, hard, inert FBs, inform the patient that a simple technique will be attempted but that to avoid more damage, the search will not extend beyond 10 to 15 minutes.

If the FB is in an extremity, it is preferable, and sometimes essential, to establish a bloodless field. For all cases, provide optimal lighting conditions and arrange comfortable positioning of both the patient and the clinician.

Anesthetize the area with a small infiltration of 1% or 20% lidocaine (Xylocaine) with epinephrine (to avoid tissue swelling).

Take a blunt stiff metal probe (not a needle), and gently slide it down the apparent track of the puncture wound. Move the probe back and forth, fanning it in all directions, until a clicking contact between the probe and the foreign body can be felt and heard. This should be repeated several times, until it is certain that contact is being made with the foreign body (Figure 154-1). 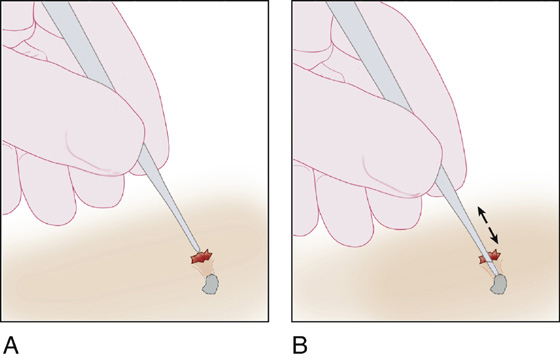 Figure 154-1 A, Puncture wound. B, Fan probe until foreign body is struck.

After contact is made, fix the probe in place by resting the hand that is holding the probe against a firm surface. Then, with the other hand, cut down along the probe with a No. 15 scalpel blade until the foreign body is reached. Do not remove the probe (Figure 154-2). 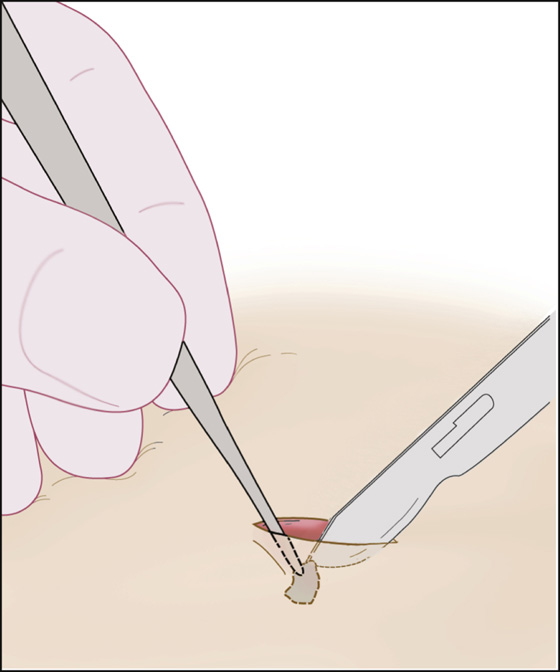 Reach into the incision with a pair of forceps, using the opposite hand, and remove the foreign body (located at the end of the probe) (Figure 154-3). 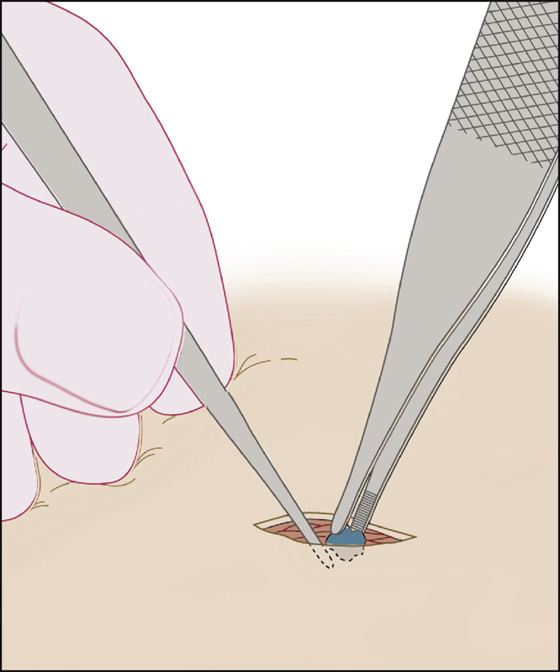 Figure 154-3 Foreign body removed with forceps while probe remains in contact with it.

Close the wound loosely with strip closures or tissue adhesive.

If the foreign body is very superficial and easily palpable beneath the skin, it may be advantageous to eliminate the probe and just cut down directly over the foreign body while stabilizing it between the fingers of your nondominant hand.

If the entrance wound is large, the probe may not be required. Instead, a hemostat may be inserted using a spreading technique to search for and then remove the foreign body. A small puncture may be enlarged by using a No. 15 blade to make a stab wound into the opening of the puncture.

Warn the patient about the signs of a developing infection.

If the foreign body cannot be located in approximately 15 minutes, inform the patient of the various possibilities: in the case of a nonimmunogenic, small FB (like a metal fleck), the wound will probably heal without complications. Alternately, a more immunogenic or larger foreign body may migrate to the skin surface over a period of months or years, at which time it can be more easily removed. If an abscess should form, this may make removal of the FB easier with drainage of the abscess cavity. Should the wound or surrounding structures become infected, antibiotics may be helpful, but definitive treatment remains the removal of the object.

Patients with glass, sea shell fragments, gravel, or other potentially harmful objects embedded subcutaneously should have them removed as soon as possible and will require ultrasound guidance, surgical consultation, or referral if they cannot be easily located and removed.

If the wound is in a complex area, such as the palm of the hand or periorbital region, consultation for removal in the operating room, on an immediate or delayed basis, may be appropriate. Always inform the patient, and document when a retained foreign body is suspected.

Ultrasonography is the most reliable method for detecting superficial radiolucent foreign bodies and may be used for guidance in their retrieval. Note that a negative ultrasonogram does not reliably rule out the possibility of a retained subcutaneous FB.

When ultrasonography is available and the clinician is familiar with its use, the following technique can be used when the simple techniques described above have been nonproductive.

A high-frequency linear transducer (7.5 to 10 MHz) is placed over the location of the suspected foreign body (with or without the use of a stand-off pad). Use of a “stand-off pad” can elevate the transducer several millimeters above the area of interest. This allows better sound transmission and an improved view of the underlying soft tissues. A glove filled with ultrasound gel can serve as a stand-off pad. Foreign bodies will usually appear hyperechoic to the surrounding soft tissue. Material such as wood or plastic tends to produce shadowing (Figure 154-4). Metal objects tend to produce reverberation or comet-tail artifact. The body part can also be placed in a water bath to enhance visualization of the structure of interest. The area is scanned throughout its entirety in search for a hyperechoic object in both the sagittal and transverse planes. Once found, the depth down from the skin can be measured as well as the size of the object. Survey the area surrounding the object for vessels. Vessels and other sensitive structures in close proximity to the foreign body should discourage all but the highly skilled practitioner from attempting to remove the object. 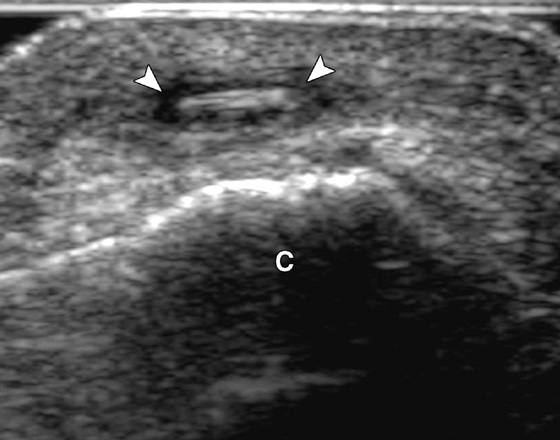 Center the transducer over the foreign body, and mark the skin to identify the optimal incision site. After anesthetizing the skin and making a lateral incision, image the foreign body in the long axis, and insert a forceps or hemostat under ultrasound vision and guide it toward the object. If you are unable to remove the foreign body under long-axis view, attempt this in a short-axis view. In general, the technique works better for linear-shaped objects. Remember, bone and articular surfaces may appear hyperechoic and cast shadows similar to those of a foreign body. Scar tissue may also appear hyperechoic.

Antibiotics are not routinely prescribed but may be justified when FB removal must be postponed; when there is suspected penetration of bones, joints, or tendons; or in patients who are highly susceptible to infection.

Always provide the patient with the name of a clinician who can perform the necessary follow-up care.

Schedule a wound check within 48 hours, and warn the patient about signs of infection.

Do not disregard a patient’s suspicion that an FB may be present, especially when glass or wood may be involved.

Do not cut down on the metal probe if there is any possibility of cutting across a neurovascular bundle, tendon, or other important structure.

Do not attempt to cut down to the FB unless it is very superficial or there is a probe in place and in contact with the FB. Often a blind incision will be unproductive and may only extend the injury.

Do not blindly grab for something in a wound with a hemostat. An important anatomic structure may be damaged.

Every effort should be made to identify the presence of a FB during the initial visit. When a FB is discovered in a wound, the clinician must weigh the risk of leaving the FB in place against the potential harm of attempting to remove it. Small, inert, deeply embedded objects that cause no symptoms can usually be left in place. Vegetative FBs cause intense inflammation and should be removed immediately. Foreign bodies that are heavily contaminated should be removed as soon as possible. Glass, metal, and plastic are relatively inert, and removal can be postponed if necessary.

Any patient who complains of an FB sensation should be assumed to have one, even if nothing can be seen radiographically.

Almost all glass is visible on plain radiographs, but small fragments, between 0.5 and 2.0 mm, may not be visible, even when left and right oblique projections are added to the standard anteroposterior and lateral views.

Radiographs are usually of little value in accurately locating metallic flecks. Even when skin markers are used, because of variances in the angle of the x-ray beam, the apparent location of the FB is often significantly different from the real location. An incision made over the apparent location therefore usually produces no FB. Needle localization under fluoroscopy or ultrasound guidance may be required for those objects that must be removed, if the simple probe technique described (or alternative technique) fails to deliver the FB.

If removal of a metallic object is attempted and a strong eye magnet is available, it can be substituted for the probe described earlier. First, enlarge the entrance wound; then, after contact with the magnet, the object can be dissected out or even pulled out with the magnet.

Moderate-velocity metallic FBs rarely travel deeply into the subcutaneous tissue, but a potentially serious injury must be considered when these objects strike the eye. A specialized orbital CT scan may be obtained in these cases. MRI is better at detecting nonmetallic FBs within the orbit or globe of the eye, but before MRI is attempted, a simple radiograph should be obtained to ensure that a metal fragment is not present. MRI is more sensitive than CT or ultrasonography for identifying all nonmetallic soft tissue FBs.