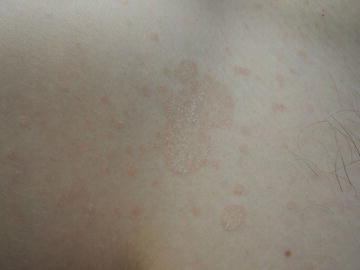 (a and b) Chest and back are most commonly affected

A 24-year-old male with no prior medical history presented with a rash on his chest, shoulders and back. The rash started in two spots on his left shoulder about 8 months prior. About 1 week prior to the visit, it spread to his chest. He did not report pruritus. He had not applied anything to the rash yet.
Vitals were normal. On exam, on the patient’s chest, back, and flank, there were multiple scattered erythematous macular and papular lesions with irregular shapes and varied sizes. These lesions had well-delineated borders with mild central scale.
This was treated as tinea corporis based on the well-circumscribed lesions with central scale. The patient was prescribed 2 % ketoconazole cream once daily for 14 days.

Considering the patient’s age, persistence of the rash, location of macules, and minimal pruritus, the favored diagnosis, as reclassified by dermatology, is tinea versicolor. Tinea versicolor is distinct from tinea corporis, and differs from all other tinea diseases (e.g., tinea pedis, tinea capitis) in that it is not a dermatophyte infection. However, they are treated in similar manners, with topical and oral antifungals , so in this case the 2 % ketoconazole would have been the appropriate treatment anyhow.

Tinea versicolor, also called pityriasis versicolor , is a benign superficial fungal infection characterized by scaly, hyperpigmented or hypopigmented lesions commonly found on the back, chest, and neck. Tinea versicolor is caused by an overgrowth of the lipophilic Malassezia yeast , which is a component of the natural skin flora.
Tinea versicolor is a common condition, most prevalent in tropical and sub-tropical climates, although seen in temperate climates as well. It can be recurrent, and may be seen waning in winter months and returning during the summertime.
Tinea versicolor is more commonly seen in males [1] and tends to occur during young adulthood [2]. It is not contagious, rather the yeast overgrows when favorable conditions are met. Exogenous factors contributing to its development include high heat and high humidity. Internal factors that favor this fungal overgrowth are greasy skin, excessive sweating, hereditary factors, corticosteroid treatment, and immunodeficiency [3]. To that end, people who exercise frequently or work physical jobs may be at higher risk of developing tinea versicolor.

Tinea versicolor is typically found on the trunk, neck, and upper arms. Although it may not always be the case, tinea versicolor presents mainly as a hypopigmented rash on darker skin [1], and a hyperpigmented brown or red rash on lighter Caucasian skin. The lesions generally feature a fine scale and begin as round or oval macules or papules (if scaly), and may grow and coalesce to form larger patches or plaques. Some patients may present complaining of mild pruritus, but for most the condition is asymptomatic [2].
Only gold members can continue reading. Log In or Register to continue