Hypothermia, usually defined as a body temperature less than 36°C, occurs frequently during anesthesia and surgery. Unintentional perioperative hypothermia is more common in patients at the extremes of age, and in those undergoing abdominal surgery or procedures of long duration, especially with cold ambient operating room temperatures; it will occur in nearly every such patient unless steps are taken to prevent this complication.

Hypothermia reduces metabolic oxygen requirements and can be protective during cerebral or cardiac ischemia. Nevertheless, hypothermia has multiple deleterious physiological effects (Table 52-1). In fact, unintended perioperative hypothermia has been associated with an increased mortality rate.

Core temperature is normally the same as the central venous blood temperature (except during periods of relatively rapid temperature change as can occur during extracorporeal perfusion).

When there is no attempt to actively warm an anesthetized patient, core temperature usually decreases 1-2°C during the first hour of general anesthesia (phase one), followed by a more gradual decline during the ensuing 3-4 h (phase two), eventually reaching a point of steady state (phase three). With general, epidural, or spinal anesthesia redistribution of heat from warm “central” compartments (eg, abdomen, thorax) to cooler peripheral tissues (eg, arms, legs) from anesthetic-induced vasodilation explains most of the initial decrease in temperature during phase one, with actual heat loss from the patient to the environment being a minor contributor. Continuous heat loss to the environment appears to be primarily responsible for the slower subsequent decline during phase two. At steady state, heat loss equals metabolic heat production (Figure 52-1). 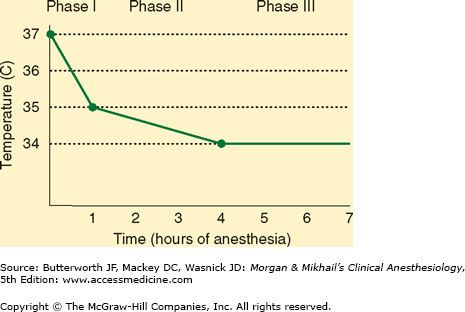 Unintentional hypothermia during general anesthesia follows a typical pattern: a steep drop in core temperature during the first hour (phase one, redistribution), followed by a gradual decline during the next 3-4 h (phase two, heat loss), eventually reaching a steady state (phase three, equilibrium).

In the normal unanesthetized patient the hypothalamus maintains core body temperature within very narrow tolerances, termed the interthreshold range, with the threshold for sweating and vasodilation at one extreme and the threshold for vasoconstriction and shivering at the other. Increasing core temperature a fraction of a degree induces sweating and vasodilation, whereas a minimally reduced core temperature triggers vasoconstriction and shivering.

Anesthetic agents inhibit central thermoregulation by interfering with these hypothalamic reflex responses. For example, isoflurane produces a dose-dependent decrease in the threshold temperature that triggers vasoconstriction (3°C decrease for each percent of inhaled isoflurane). Both general and regional anesthetics increase the interthreshold range, albeit by different mechanisms. Spinal and epidural anesthetics, like general anesthetics, lead to hypothermia by causing vasodilation and internal redistribution of heat. The accompanying thermoregulatory impairment from regional anesthetics that allows continued heat loss is likely due to altered perception by the hypothalamus of temperature in the anesthetized dermatomes rather than a central drug effect, as with general anesthetics.

A cold ambient temperature in the operating room, prolonged exposure of a large wound, and the use of large amounts of room-temperature intravenous fluids or high flows of unhumidified gases can contribute to hypothermia. Prewarming the patient for half an hour with convective forced-air warming blankets prevents phase one hypothermia by eliminating the central-peripheral temperature gradient. Methods to minimize phase two hypothermia from heat loss during anesthesia include use of forced-air warming blankets and warm-water blankets, heated humidification of inspired gases, warming of intravenous fluids, and increasing ambient operating room temperature. Passive insulators such as heated cotton blankets or so-called space blankets have limited utility unless virtually the entire body is covered.

Shivering can occur in postanesthesia care units (PACUs) or critical care units as a result of actual hypothermia or neurological aftereffects of general anesthetic agents. Shivering is also common immediately postpartum. Shivering in such instances represents the body’s effort to increase heat production and raise body temperature and may be associated with intense vasoconstriction. Emergence from even brief general anesthesia is sometimes also associated with shivering. Although the shivering can be part of nonspecific neurological signs (posturing, clonus, or the Babinski sign) that are sometimes observed during emergence, shivering is most often associated with hypothermia and volatile anesthetics. Regardless of the mechanism, shivering appears to be more common after longer durations of surgery and the use of greater concentrations of a volatile agent. Occasionally it is intense enough to cause hyperthermia (38-39°C) and metabolic acidosis, both of which promptly resolve when the shivering stops. Both spinal and epidural anesthesia lower the shivering threshold and vasoconstrictive response to hypothermia; shivering may also be encountered in the PACU following regional anesthesia. Other causes of shivering should be excluded, such as sepsis, drug allergy, or a transfusion reaction. Intense shivering may increase oxygen consumption, CO2 production, and cardiac output. These physiological effects are often poorly tolerated by patients with preexisting cardiac or pulmonary impairment.

Postoperative shivering may increase oxygen consumption as much as fivefold, may decrease arterial oxygen saturation, and may be associated with an increased risk of myocardial ischemia. Although postoperative shivering can be effectively treated with small intravenous doses of meperidine (12.5-25 mg) in adults, the better option is to reduce the likelihood of shivering by maintaining normothermia. Shivering in intubated and mechanically ventilated patients can also be controlled with sedation and a muscle relaxant until normothermia is reestablished and the effects of anesthesia have dissipated.

Postoperative hypothermia should be treated with a forced-air warming device, if available; alternately (but less satisfactorily) warming lights or heating blankets can be used to restore body temperature to normal. Hypothermia has been associated with an increased incidence of myocardial ischemia, arrhythmias, increased transfusion requirements, and increased duration of muscle relaxant effects, the latter of which can be especially harmful in the recently extubated patient.

Malignant hyperthermia (MH) is a rare (1:15,000 in pediatric patients and 1:40,000 adult patients) genetic hypermetabolic muscle disease, the characteristic phenotypical signs and symptoms of which most commonly appear with exposure to inhaled general anesthetics or succinylcholine (triggering agents). MH may occasionally present more than an hour after emergence from an anesthetic, and rarely may occur without exposure to known triggering agents. Most cases have been reported in young males; almost none have been reported in infants, and few have been reported in the elderly. Nevertheless, all ages and both sexes may be affected. The incidence of MH varies greatly from country to country and even among different geographic localities within the same country, reflecting varying gene pools. The upper Midwest appears to have the greatest incidence of MH in the United States.