I.   DEFINITION: Acute respiratory distress syndrome (ARDS) is an inflammatory lung condition characterized by increased vascular permeability, pulmonary edema and consolidation, and hypoxemia. It can be triggered by direct and indirect injuries and is usually associated with signs of other organ dysfunction. Although histopathologically well defined (diffuse alveolar damage; DAD), the clinical diagnosis of ARDS has relatively poor specificity for the presence of DAD at postmortem. Recently, great effort has been put in redefining the diagnostic criteria of ARDS (Berlin definition of ARDS, Table 19.1); however, these new ARDS criteria still have relatively low specificity for DAD. It is unknown if patients meeting the clinical criteria for ARDS but without DAD behave differently than do patients with clinical ARDS with DAD.

II.   ETIOLOGY: ARDS usually develops in patients that suffer from predisposing conditions that induce a systemic inflammatory response. ARDS can be caused by pulmonary conditions, such as pneumonia, aspiration pneumonitis, and contusions, or, less commonly, by extrapulmonary conditions, such as abdominal sepsis, acute pancreatitis, and multiple trauma. Trauma-associated ARDS is generally considered a less severe form of ARDS compared with pneumonia-associated ARDS (which is by far the most common cause of ARDS). Computed tomography may distinguish different patterns of ARDS. In Figure 19.1A, ARDS secondary to pneumonia (direct lung injury) shows most of the dense consolidations localized to the lower lung fields, and in Figure 19.1B, ARDS secondary to acute pancreatitis (indirect lung injury) shows a diffuse, almost homogeneous pattern of consolidation. However, there is substantial overlap in CT findings between ARDS caused by direct and indirect lung injury. Some pathogens causing direct lung injury (such as the H1N1 virus) may present with diffuse consolidation on CT.

b If altitude is higher than 1,000 m, the correction factor should be calculated as follows: [PaO2/FIO2 × (barometric pressure/760)].

c This may be delivered noninvasively in the mild acute respiratory distress syndrome group.

III.   EPIDEMIOLOGY: Nosocomial ARDS may be a “preventable” syndrome. Over the past 20 years, the incidence of nosocomial ARDS has declined remarkably. In a population-based cohort study (from 2001 to 2008) conducted in Olmsted County, Minnesota, Li et al. observed a steady decrease of nosocomial ARDS; however, the incidence of community-acquired ARDS was unchanged (as shown in Figure 19.2). These observations corroborate the hypothesis that ARDS can be prevented by improved care of critically ill patients. Important elements that might have contributed to a reduced incidence of nosocomial ARDS are lung-protective ventilation for patients at risk for ARDS, ventilator care bundles, goal-directed therapy in sepsis and septic shock, early antimicrobial administration, male donor plasma, and more cautious fluid administration and transfusions of blood products. Despite these encouraging findings, mortality among patients with ARDS remains high, up to 45% for severe disease. Recovery from severe ARDS and prolonged ventilation is slow and accompanied by muscle wasting and weakness. After 5 years from the ARDS episode, exercise limitation, impairment of memory, cognition, and ability to concentrate may persist. 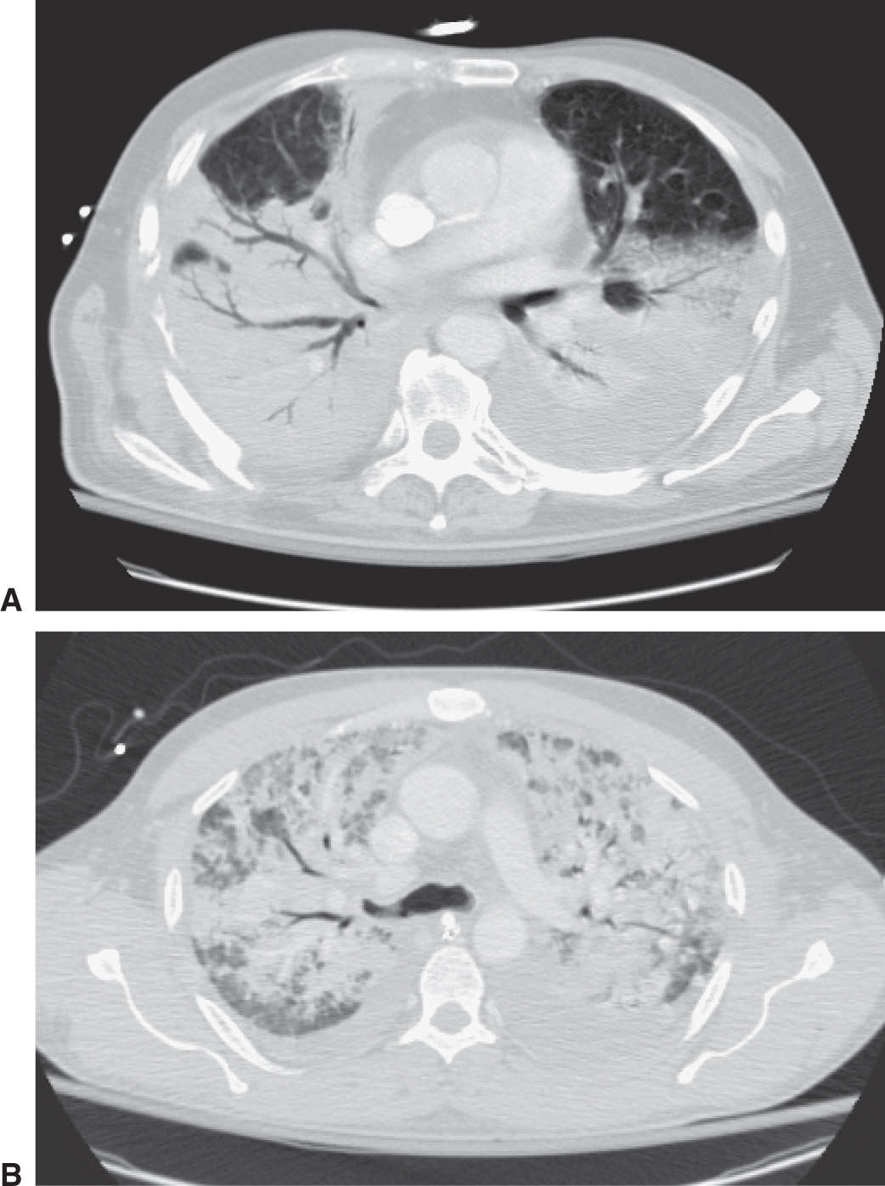 A.   Direct versus Indirect Lung Injury: The causes of ARDS are complex and variable but broadly fall within two clinical categories: direct and indirect injury to the lung. Direct injury to the lung includes trauma associated with mechanical ventilation (ventilation-induced lung injury), massive aspiration, infection (mainly pneumonia), near drowning, and pre-ICU chest and lung trauma. Indirect injuries include just about any type of systemic inflammatory process, such as sepsis and pancreatitis, that may lead to diffuse inflammatory lung injury. Identifying an underlying cause of ARDS is crucial, as ARDS may not recover if the underlying cause is not identified and treated. 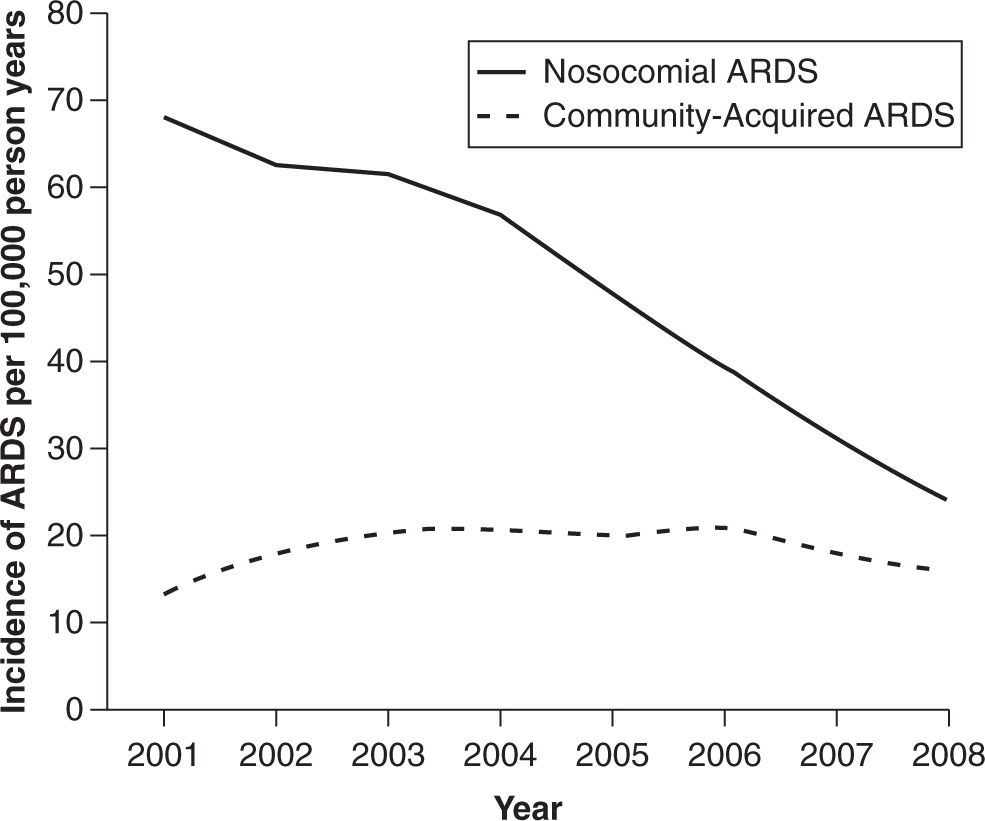 B.   Primary Immune Response: Activation of resident macrophages, release of inflammatory mediators (cytokines and chemokines), recruitment of neutrophils into the lung with the release of additional inflammatory mediators and toxic products causes lung epithelial and endothelial injury. Activation of coagulation in the microcirculation contributes to additional endothelial injury. A number of inflammatory mediators have been associated with worse outcomes in patients with ARDS. Dysregulated apoptosis and autophagy as well as impaired function of T regulatory lymphocytes contribute to injury and/or delayed resolution. The disruption of the endothelial-epithelial barrier due to inflammation causes the accumulation of protein-rich edema fluid in the airspaces and interstitium as well as impaired lung edema clearance. Inactivation of the existing surfactant and production of abnormal surfactant may occur. Alveolar exudate, lung consolidation, and alveolar collapse produce low lung compliance and right-to-left intrapulmonary shunt, leading to arterial hypoxemia.