I.   HEMODYNAMIC PERTURBATIONS are common during intensive care unit admission. Both hypotensive and hypertensive emergencies threaten cardiovascular system’s ability to provide sufficient oxygen and metabolic substrates to meet the demands of the body’s tissues. In the event that supply is insufficient to meet demand, pathophysiologic alterations lead to the clinical manifestations of progressive end-organ damage, be it neurologic, cardiovascular, pulmonary, renal, gastrointestinal, hematologic, or musculocutaneous. The goal of the hemodynamic management of such patients is to maintain end-organ oxygenation and perfusion in order to preserve function.

II.   SHOCK is a state of inadequate tissue perfusion, leading to tissue hypoxia and organ dysfunction. In its early stages, shock may be compensated: potent neurohumoral reflexes, including activation of the sympathetic nervous system and the renin–angiotensin–aldosterone system, act to maintain a supply of oxygen sufficient to meet cellular demands. With the failure of these reflexes, however, shock becomes progressive and, ultimately, irreversible: as demand for intracellular energy outstrips supply, anaerobic metabolism predominates and lactic acid production rises, membrane-associated ion transport pumps fail, the integrity of cell membranes is compromised, and cell death ensues. Shock is classified according to one of four mechanisms: hypovolemic, cardiogenic, obstructive, or distributive. The first three mechanisms may be categorized as states of hypodynamic shock, while the last may be categorized as a state of hyperdynamic shock.

1.   Hypovolemic shock occurs with the depletion of effective intravascular volume, due to insufficient intake, excessive loss, or both. Common causes include dehydration, acute hemorrhage, gastrointestinal and renal losses, and interstitial fluid redistribution occurring in the context of severe tissue trauma, burn injuries, or pancreatitis. Hemorrhage is the most common cause of shock in trauma patients and has been categorized by the American College of Surgeons into four classes, providing a correlation between the percentage of total blood volume lost and the expected attendant physiologic changes in mental status, blood pressure, heart rate, respiratory rate, and urine output (Table 6.1). Hemodynamically, hypovolemic shock is characterized by decreased cardiac output, decreased filling pressures (see Chapter 1), and increased systemic vascular resistance (SVR).

2.   Cardiogenic shock is defined as persistent hypotension and inadequate tissue perfusion due to primary cardiac dysfunction occurring in the context of adequate intravascular volume and adequate or elevated left ventricular filling pressures. It may be caused by abnormalities of heart rate, rhythm, or contractility, although it occurs most commonly after extensive acute myocardial infarction (AMI) or ischemia leading to left or right ventricular failure. Other etiologies of cardiogenic shock include acute (e.g., tako-tsubo) and chronic cardiomyopathies, myocarditis, and myocardial contusion. The hemodynamic profile of cardiogenic shock is characterized by decreased cardiac output, increased filling pressures, and increased SVR.

4.   Distributive shock is characterized by normal or high cardiac output and a low SVR. In the critical care setting, it is most commonly caused by sepsis. Other etiologies include neurogenic shock, anaphylaxis, adrenal insufficiency, hepatic failure, and high-output arteriovenous fistulae. The hemodynamic and metabolic profiles of the various types of shock are summarized in Tables 6.2 and 6.3.

B.   Clinical Presentation of Shock reflects the macro- and microvascular consequences of inadequate tissue perfusion and oxygenation.

C.   Monitoring in shock should be directed toward detecting, if not preventing, the progression of tissue hypoperfusion as well as toward assessing the adequacy of resuscitation.

2.   Monitors of tissue perfusion include both hemodynamic and metabolic indices, the utility of which are likely greater when followed over time rather than when examined at discrete time points.

a.   Hemodynamic indices. Measurement of systemic blood pressure allows for a global rather than a regional assessment of the adequacy of tissue perfusion. Given the desire for continuous arterial pressure monitoring and the need for frequent blood draws to track trends in arterial blood gases and serum lactate levels (see later), most patients in shock will have an indwelling arterial cannula placed for systemic blood pressure measurement (see Chapter 1). The need to infuse potent vasoactive medications, measure central venous oxygen saturation, and establish large-volume access frequently requires placement of a central venous catheter. Placement of a pulmonary artery (PA) catheter (PAC) may further assist in the differential diagnosis of shock when the hemodynamic profile is not clear from peripheral assessment and may aid in monitoring cardiac responses (e.g., PA occlusion pressure, cardiac output) to therapeutic interventions. However, clinical trials have demonstrated that placement of PACs does not improve patient outcomes. This should not be a surprise given that PACs are monitoring devices and not therapeutic interventions. Additional monitors (e.g., esophageal Doppler monitors, echocardiography, arterial pulse waveform analysis) are now available to allow less-invasive assessment of cardiac output, stroke volume, and SVR (see Chapter 1).

1.   Serum pH. Metabolic acidemia may reflect a state of increased anaerobic metabolism and endogenous acid production occurring with progressive tissue hypoperfusion. It may also signal worsening renal and hepatic function and an inability to metabolize and clear the increasing endogenous acid load.

2.   Serum lactate. In the absence of sufficient cellular levels of oxygen, demand for energy sources such as ATP exceeds supply, the citric acid cycle and oxidative phosphorylation fail, and pyruvate generated by glycolysis is increasingly reduced to lactate.

o2). When supply is insufficient to meet demand or demand exceeds supply, S

o2 reflects the balance between Do2 and

o2, it is affected by the variables that determine them, including body temperature, metabolic rate, hemoglobin concentration, arterial oxygen partial pressure, and cardiac output (Fig. 6.1). It is important to note that S

1.   General principles. If shock is defined as a state of inadequate tissue perfusion and oxygenation, it makes sense that treatment should be aimed at increasing Do2 while minimizing

b.   Circulation. Delivery of well-oxygenated blood to the tissues depends on an adequate cardiac output and driving pressure. Thus, fluid resuscitation plays an integral role in the treatment of shock. In the event that infusion of crystalloid, colloid, or blood products is insufficient to establish and maintain adequate systemic oxygen delivery, pharmacologic therapy with inotropes and/or vasopressors may be required. 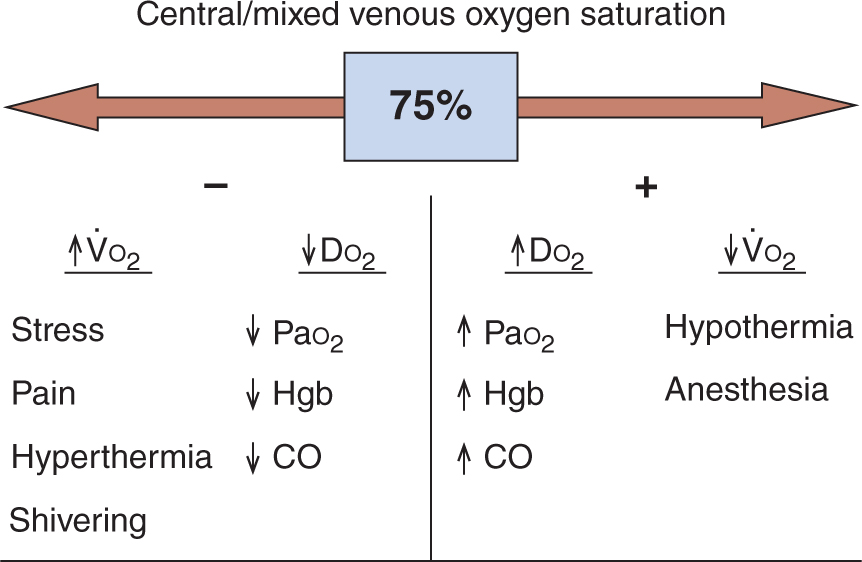