A.   The development of ECLS/ECMO as a temporary assist device is a direct extension of the principles of cardiopulmonary bypass, which usually involves intrathoracic venoarterial (VA) cannulation. The use of ECMO allows time for treatment and recovery from severe heart and lung failure.

B.   ECMO is most commonly used in patients with inadequate oxygen delivery resulting from ineffective oxygenation due to severe lung disease or low cardiac output due to severe circulatory failure, or both.

II.   BACKGROUND. In May 1953, Gibbon used artificial oxygenation and perfusion support for the first successful open heart operation. Then, in 1975 Bartlett et al., were the first to successfully use ECMO in neonates with severe respiratory distress.

A.   There have been two randomized trials in adults with acute respiratory distress syndrome (ARDS) and neither has shown a survival benefit. Both used ECMO techniques that are now outdated and had complication rates considerably higher than those reported recently by high-volume ECMO centers. ECMO can fully support and save the lives of some patients with severe respiratory or cardiac failure, and the best results are obtained in centers with established programs and well-trained, experienced staff.

B.   Indications and Contraindications to the initiation of ECLS in adults were carefully reviewed by the ECMO committee at Massachusetts General Hospital. These include the following:

a.   Cardiogenic shock with end-organ hypoperfusion including the following:

b.   Failure of maximal medical therapy despite optimization of the ventilator settings:

3.   Absolute contraindications. To be screened by ECMO Team

c.   Paralytics and steroids >48 hours (if patient is intubated).

d.   CPR more than 60 minutes in-hospital, otherwise more than 30 minutes outside of the hospital.

i.   Contraindication to anticoagulation, or refusal to receive blood products.

An ECMO circuit contains several key components including a drainage (venous) cannula, a return (arterial) cannula, a driving force (pump), a gas exchange unit (oxygenator), a heat exchanger, and connection tubing. There are also devices to maintain the safety of, and measure the functioning of, the circuit. The cannulas are sized between 21 and 28 French for adults and smaller for newborns and children. Circuit components should be chosen to enable a blood flow of at least 50 to 60 mL/kg/min. The PaCO2 is determined by the oxygenator gas flow (or sweep speed). In practice, CO2 is efficiently cleared by ECMO and usually PaCO2 is easily controlled. The determinants of PaO2 are more complex, but the most important determinant is the circuit blood flow.

B.   In general, VV ECMO is used for respiratory failure and VA ECMO for both lung and cardiac failure. Low-frequency positive–pressure ventilation extracorporeal CO2 removal (LFPPV-ECCO2R) uses VV extracorporeal circulation. CO2 can be removed with a low extracorporeal blood flow (around 20% of the patient’s cardiac output). 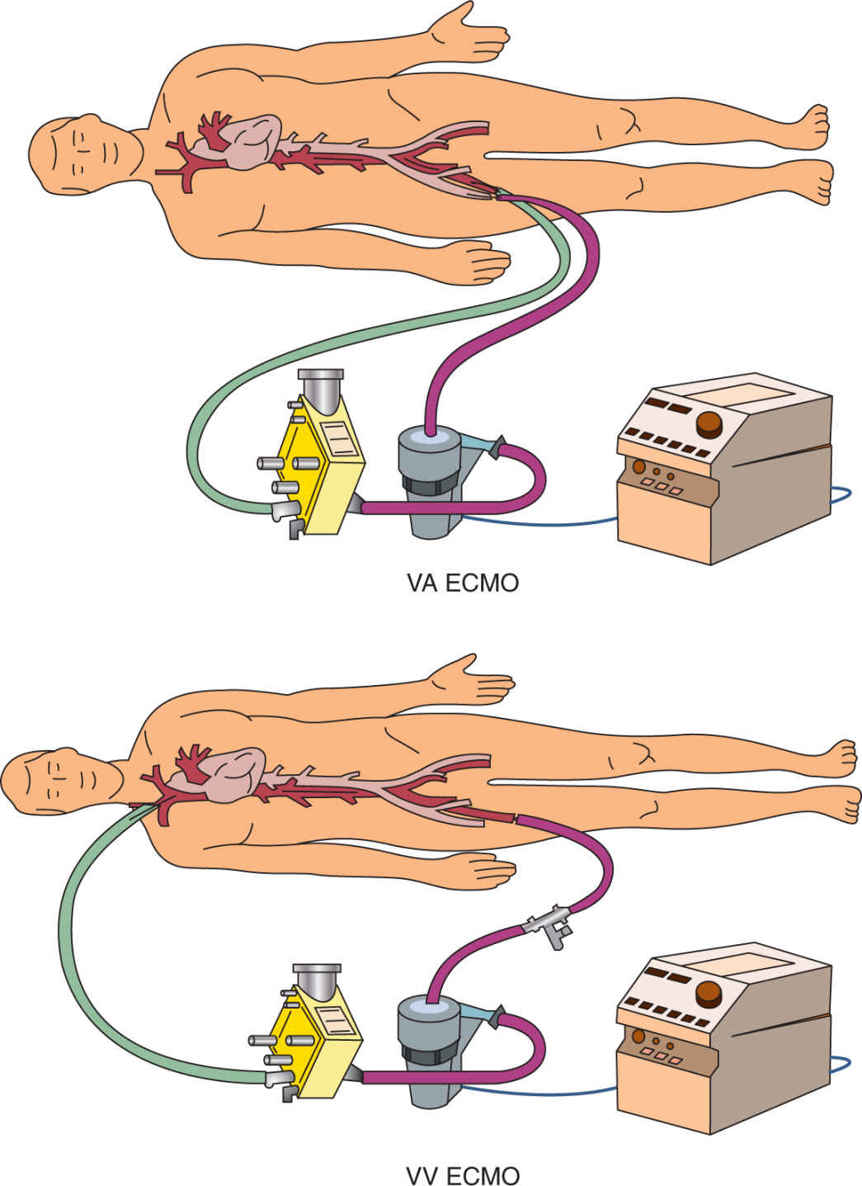 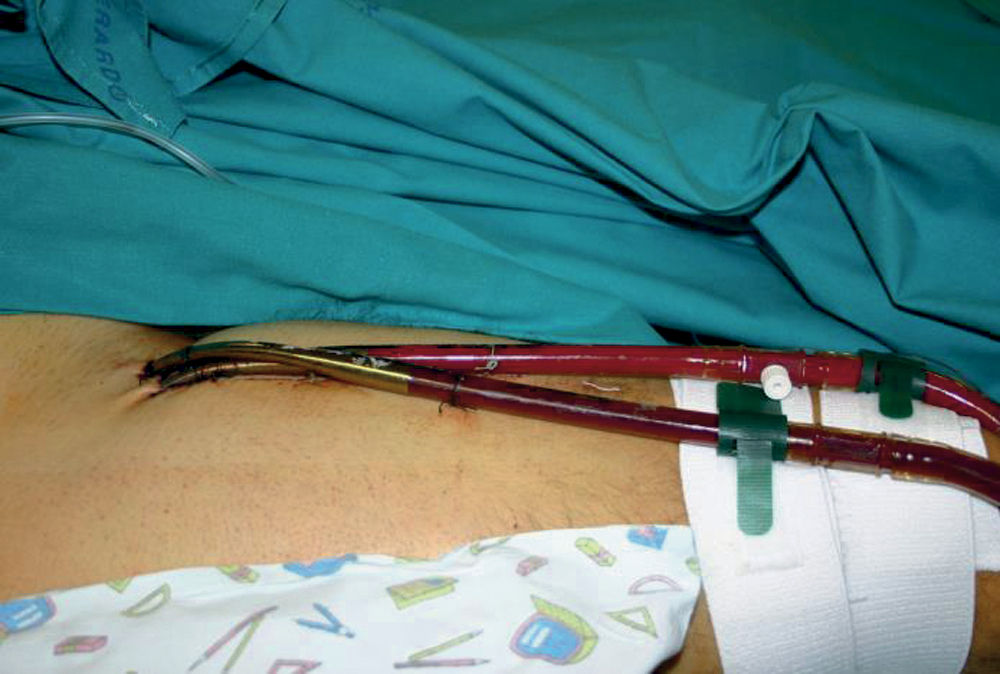 FIGURE 18.2 Peripheral VA ECMO. If ECMO is started at the end of cardiac surgery, the right atrium and ascending aorta may be used as cannulation sites. With VA ECMO, the patient’s heart and lungs are bypassed, normal arterial blood gases and hemodynamics can be obtained, and full cardiac and respiratory support can be provided.

2.   Venovenous ECMO involves venous blood from the patient being accessed from a large central vein and returned to the venous system near the right atrium after passing through an oxygenator. It provides support for severe respiratory failure when no major cardiac dysfunction exists. When flow through a single access cannula is insufficient to support the high ECMO flow rate that may be required in severe respiratory failure, a second venous access cannula may be required (Fig. 18.3).

C.   Selecting the Form of ECMO; VV or VA. VV ECMO is a low-pressure circuit compared with VA, resulting in less stress on the circuit tubing and oxygenator, and may therefore improve their longevity. The major advantage of VA over VV ECMO is the management of cardio-respiratory failure or cardiac failure where use of a ventricular assist device (VAD) is inappropriate. It may be indicated for cardiac decompensation following cardiac surgery either as a bridge to recovery or to another destination therapy.

1.   The size of the venous cannula will determine blood flow, and therefore the largest possible cannula should be placed. Sizes 23 F through 29 F have been used successfully. For the return cannula, a 19 F through a 21 F is used for arterial cannulation and a 21 F through a 23 F for venous cannulation. In the majority of cases, venous cannulas can be placed percutaneously. To minimize limb complications from ischemia, one strategy is to place a 5 to 7 F perfusion cannula in the superficial femoral artery distal to the primary arterial inflow cannula to perfuse the leg. This cannula is connected to a tubing circuit that is spliced into the arterial circuit with a Y-connector. The distal cannula directs continuous flow into the leg and significantly reduces the incidence of leg ischemia. It should be noted, however, that limb ischemia associated with long-term peripheral cannulation relates not just to arterial perfusion, but also to the relative venous obstruction that can occur with large venous lines. In such circumstances, distal venous drainage can be established by placing another small venous cannula into the circuit.

FIGURE 18.3 Avalon cannula VV ECMO. VV ECMO improves patients’ oxygenation by reducing the amount of blood that passes through the lung without being oxygenated and in addition, removes CO2 from patients’ blood. This is the appropriate mode of support for virtually all patients with primary respiratory failure, even when there is significant hemodynamic instability. The requirement for high doses of vasoactive drugs is not a contraindication to VV ECMO because once oxygenation improves and mechanical ventilation is reduced, the circulation usually improves dramatically.