There have been several predictive factors described that may determine R0 resections. These include for LRC, original margin status, site of pelvic recurrence, number of points of fixity, lymph node status at primary surgery, intraoperative radiotherapy, preoperative and postoperative adjuvant therapy, increased serum CEA levels, extent of resection, and operation type at primary resection (Heriot et al. 2008; Ike et al. 2003; Moore et al. 2004; Pacelli et al. 2010). Besides clinical parameters, pelvic MRIs are crucial in the decision-making process for PE surgery. This is largely because the use of MRI allows clear appreciation of surgical planes and has advantages of good delineation of bony and soft tissue structures. These features allow the surgeon to determine resectability as well as the need for extrafascial dissection to achieve clear circumferential margins. Interestingly, while MRI is the first-choice staging modality for primary rectal cancer (Beets-Tan et al. 2000, 2001), there is little literature about its performance for predicting extent of tumor invasion in local recurrences. Dresen et al. (2010) has demonstrated that preoperative MRI for recurrent lesions is accurate, with a negative predictive value of 93–100 % for invasion into critical structures. However, there was a trend towards over-staging of recurrent tumors and this was mainly attributed to misinterpretation of diffuse fibrosis, especially at the lateral pelvic sidewall.
PET scans provide useful information with regard to presence of metastatic disease and is also an accurate modality for detecting pelvic recurrence with advantages over CT or MRI in differentiating scar/fibrosis from viable tumor (Schaefer and Langer 2007; Huebner et al. 2000). Nonetheless false-positive interpretations of physiologic FDG uptake in displaced pelvic organs like bladder, seminal vesicles, uterus, and small bowel loops as well as radiation-induced inflammation reduce specificity. Both the PET and pelvic MRI thus require expert assessment together with a dedicated radiologist and often, the decision to proceed requires a period of evaluation.
To aid in summarizing what factors are useful in PE surgery, a survey involving an international panel of 36 colorectal surgeons that perform PE surgery was conducted. Ninety-nine clinical and radiological criteria were evaluated based on a Likert scale. Clinical factors suggestive of systemic disease, symptoms of advanced local recurrence, surgical fitness, and cognitive impairment were considered important by the panel when considering suitability for surgery. For radiological features, strong agreement was achieved for factors associated with tumor involvement in the axial and anterior compartments. Agreement, however, was not obtained for resectable metastatic disease as well as lateral and posterior compartment tumor involvement. These features will require further evaluation before consensus may be obtained (Chew et al. 2013).

A sacrectomy may be considered if the tumor is adherent or has invaded the presacral fascia especially if previous rectal resection has been performed. Oncological benefits (Wells et al. 2007; Melton et al. 2006; Feresnchild et al. 2009) have been purported with improved overall survival and disease-free survival. Traditionally, sacropelvic resection at or below the level of S3 was considered the limit of resection, but there have been increasing number of reports for high sacrum (at or above level of S2) (Dozois et al. 2011; Colibaseanu et al. 2014). Outcomes in these series have shown that for higher sacrum resection, 5-year survival rates (17–31 %) are as good as those for lower sacrum resections (20–26 %).
The orthopedic surgeon has frequently been called for assistance at this portion of the procedure, which requires the patient to be turned prone following completion of the abdominal and perineal phases of the procedure. In total sacrectomies, pelvic stability reconstruction of the lumbar spine and the iliac bone is required with titanium rods supplemented by bone grafts. Recently, abdominal approaches have been suggested for S3 and below (Solomon et al. 2014). The multiple logistic advantages described include reducing general anesthetic time as turning a patient prone on an already prolonged operation (on average >9 h per case), with multiple invasive monitoring lines, is often arduous, complex, and challenging. The ability to better dissect off lateral compartment structures transabdominally and vascular control and hemostasis argue in favor of an abdominal approach for lower sacrectomies.
Complication rate remains high, however, and major complications such as pelvic sepsis range from 15 to 39 % and increase if the patient has had radiotherapy. Wound dehiscence rates also range from 31 to 58 %. For postoperative neurological deficits, higher sacrectomies have been found to cause higher incidences of urinary and bowel dysfunction, but there was no observed functional difference in postoperative ambulation between high or low sacrectomies (Harji et al. 2013). Postoperative rehabilitation and physiotherapy are evidently vital in all patients who undergo sacrectomies.

Various studies suggest that lateral pelvic sidewall recurrence is a very poor prognostic variable, with the inability to achieve R0 resection as one of the main deterring reasons (Mirnezami et al. 2010). These inferior results have been described largely due to anatomical restrictions from the bone or major pelvic sidewall vessels that limit extent of resection. Certainly, improved techniques and imaging permit en bloc resection with some encouraging results for lateral pelvic recurrences. Recent results have suggested that R0 resection rates can approach as high as 53 % with overall survival of 69 % at 19 months follow-up (Austin and Solomon 2009) and can be achieved with extended radical resections including en bloc iliac vessels as well as lateral pelvic bone and ligament resection.
In this technique, “preparation” of the pelvis often requires the mobilizing the iliac vessels free. Typically, the external iliac artery and vein are slung and mobilized off the lateral wall (Fig. 9.2). This allows access to the obturator canal and structures such as the sciatic nerve, femoral nerve, psoas, obturator internus, sacrospinous ligaments, and lateral bony structures such as the ischial spine. The internal iliac ligation usually begins with the artery followed by the vein (Fig. 9.2). If tumor is noted to have extended to the common or external iliac vessels, a vascular surgeon usually performs reconstruction with patch grafts or bypass surgery (Austin and Solomon 2009). This approach has been described in sarcoma surgery and graft patency rates are high at 58–93 % (McKay et al. 2007). 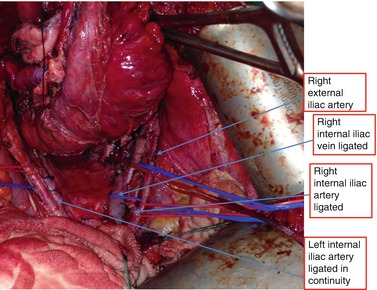 Reconstruction after PE surgery is necessary on several fronts. Urogenital tract and perineal defects often require decisions based on the quality of the tissue, which is often impaired after chemoradiotherapy, and the functional status of the remnant organ.
Only gold members can continue reading. Log In or Register to continue