A.   The management of pain, sedation, and delirium has a significant impact on patients’ clinical and functional long-term outcome. Many patients are admitted to intensive care unit (ICU) for respiratory distress requiring mechanical ventilation. Traditionally, these patients often receive continuous infusions of sedatives and analgesics to improve tolerance of mechanical ventilation and to reduce anxiety, but not all patients who are endotracheally intubated need continuous sedation and analgesia. Sedation for mechanically ventilated patients aims to reduce distress, ease adaption to the ventilator, reduce oxygen consumption and carbon dioxide production, and protect patients with brain injury from development of edema or ischemia. However, clinical observations, clinical effectiveness research as well as interventional trials have suggested that sedation is often overused and leads to delayed ambulation.

B.   There is a complex relationship among wakefulness, pain, and agitation that need to be addressed in an individualized fashion. Curley et al suggested pain and anxiety management should be driven by the goal of optimizing patient’s comfort while minimizing the risk of adverse drug effects. Protocolized sedation does not always reduce the duration of mechanical ventilation. We have therefore systematized the parallel assessment of sedation, pain, and agitation (Fig. 7.1), such that sedation, pain, and agitation can be treated in an integrative fashion with an aim to maximize the benefit of pharmacological management across these symptoms and to minimize the undesired adverse effects.

D.   Some patients with acute refractory respiratory failure require deep sedation and/or even neuromuscular transmission block in order to prevent ventilator–patient asynchrony and to avoid the risk of barotrauma due to uncontrolled and excessive spontaneous breathing. In these patients, respiratory depressant side effects of propofol and opioid infusions can be utilized to control respiratory drive and achieve patient–ventilator synchrony until gas exchange improves. In addition, deep sedation may be required temporarily when controlling elevated intracranial pressure in head injury and status epileptics or to achieve anxiolysis during pharmacological paralysis.

In contrast, some long-term ventilated patients without severe critical illness might require very little or no sedation. Accordingly, sedation strategies must recognize and respond to this problem. Daily interruption of sedative-drug infusions (if indicated) decreases the duration of mechanical ventilation and the length of stay in the ICU. In addition, the incidence of toxic-metabolic coma, delirium, drug-induced respiratory depression, immobility-induced muscle wasting, and constipation can be minimized. The goal of sedation should be established daily with the multidisciplinary team, and the goal should change as the patient’s status evolves. Nonparalyzed patients should receive sufficient sedatives to be comfortable and awake enough to communicate their needs. Anxiety is reported by up to 85% of the critically ill patients as assessed by the Anxiety Faces Scale and persisted at a year after discharge in 62% of survivors. Note that non-pharmacologic measures may reduce anxiety and pain. 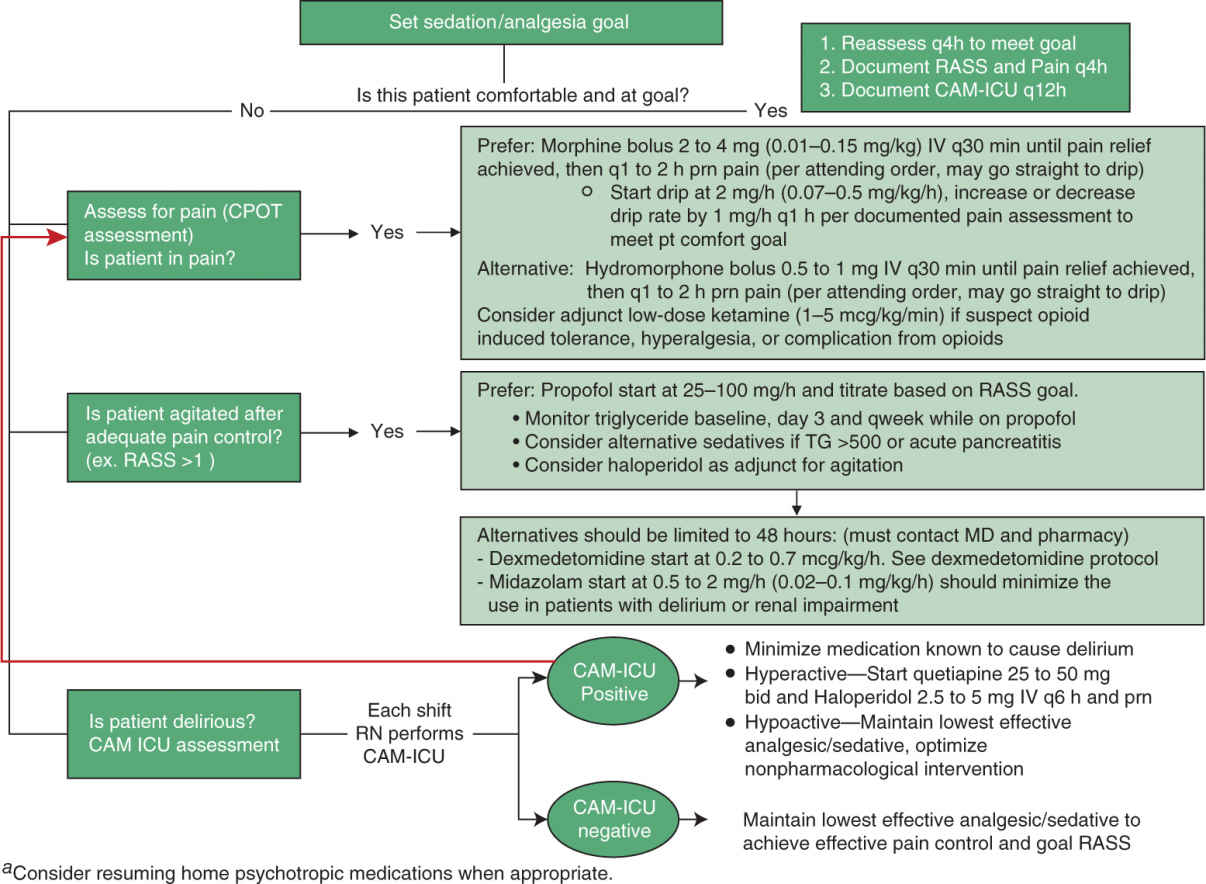 E.   Over the last decade, numerous studies have reported on the benefits of lighter sedation of patients undergoing mechanical ventilation. ICU patients who are able to interact with ICU staff are more likely to participate in early mobility activities, which will likely shorten their duration on mechanical ventilation as well as their ICU length of stay. The early mobilization is clearly not feasible when patients are deeply sedated. It should be noted that neuromuscular blocking agents do not have amnesic properties and sedation to the point of amnesia is required to avoid awake and paralyzed patients. In the extreme cases, patients in a vegetative state and coma, sedation is not required.

G.   Early mobilization has been shown to decrease delirium in the ICU. In addition, judicious use of medications known to potentiate delirium may reduce ICU delirium.

II.   SEDATION TITRATION: Poorly monitored and/or coordinated sedation may predispose patients to delirium, posttraumatic stress disorder (PTSD), prolonged ventilator time, and mortality. If sedation is required, the coordination of a daily awakening and breathing trial has been shown to be an effective procedure to reduce mortality in ICU patients. The best strategy is to avoid excessive sedation and use of sedation scales and protocol, including targeted sedation and daily interruption of all sedative medications. Richmond Agitation Sedation Scale (RASS) is one of the most commonly used scales in the United States. With established daily RASS goal, nurses can titrate the sedation to a targeted goal. In addition to use of an objective sedation scale, daily interruption of all sedative medications can facilitate recognition of the time when sedatives are no longer needed and have been shown to decrease amount of sedative used and improve outcomes. We have noticed a tendency that clinicians aggressively sedate patients early in their ICU course and keep the same level of deep sedation indefinitely. Daily cessation of sedation allows the opportunity to test sedative needs for each patient everyday.

A.   Continuous Infusion versus Intermittent Administration of Sedatives and Opioids

2.   Given the concern of oversedation associated with continuous infusions, strategies such as intermittent bolus administration of lorazepam was compared with the continuous administration of propofol with daily interruption. Intermittent boluses of lorazepam were associated with longer ventilator days compared with daily interruption of propofol infusion. This was due to lorazepam’s long half-life, persistent sedative effects, and an increased risk of delirium.

B.   Sedative Medications: Sedatives and opioids increase the risk of respiratory complications. When given in high doses, the clinician needs to expect a decrease in respiratory arousal, leading to a diminished drive to respiratory pump muscles and—even more importantly, upper airway dilator muscles, which increase the vulnerability of airway collapse.

a.   Propofol is one of the most commonly used sedative in the ICUs. It is a GABAergic agent that quickly crosses the blood–brain barrier due to its lipophilicity. Propofol has an immediate onset of action of seconds and the duration of action of 10 to 15 minutes. These pharmacokinetic characteristics are particularly useful for patients who require frequent neurological assessment. However, long-term infusions can result in accumulation within lipid stores and prolong the duration of action. Multiple studies showed propofol use is associated with shorter time to mental status recovery, liberation from ventilator, and cost effectiveness when compared to benzodiazepine sedation regimens in the ICU.

b.   Propofol causes vasodilation and myocardial suppression; hypotension is common with propofol use especially at high doses. Propofol is formulated in lipid emulsion, and thus triglycerides should be monitored every 3 to 7 days while the patient receives a continuous infusion. The phospholipid emulsion provides 1.1 kcal/mL and should be counted as a caloric source when formulating nutrition plans.

c.   Propofol infusion syndrome (PRIS) is a rare but possibly fatal complication of prolonged propofol infusion, characterized by myocardial depression and shock, profound metabolic acidosis, rhabdomyolysis, and renal failure. PRIS is mostly reported among critically ill children, particularly those with traumatic brain injury, receiving high doses of propofol. However, PRIS has been reported in adults as well. The clinician should have a high suspicion to recognize this complication, which includes monitoring pH, lactate, and creatinine kinase, especially when prolonged high-dose propofol infusion is required.

a.   Dexmedetomidine is a selective α2-receptor agonist. Stimulation of the 2A receptor will produce sedation, anxiolysis, and partial analgesia effects; stimulation of the 2B receptor induces peripheral vasoconstriction, produces analgesia, and suppresses shivering. Unlike other sedatives, it does not suppress the respiratory center, and arousal may occur during its administration. It allows for a more awake, interactive, and mobilized patient and is associated with fewer days on the ventilator and a decrease in length of stay in the ICU. Dexmedetomidine is approved for short-term sedation (<24 hours); however, it has been studied in long-term sedation at dosages that exceeds the proprietary upper limit of 0.7 mcg/kg/h. In recent controlled trials where higher doses were allowed, dexmedetomidine was safe and at least as effective as lorazepam and midazolam in providing targeted sedation and was associated with fewer days on the ventilator and in the ICU.

b.   The most common indication for use of dexmedetomidine is to provide short-term sedation to patients who are otherwise ready to be extubated but cannot safely be weaned off other sedative-hypnotics. A reasonable opportunity to initiate the transition to dexmedetomidine is when a patient qualifies for daily awakenings with traditional sedative therapies. A bolus dose of 0.5 to 1 mcg/kg can expedite the target concentration achievement of dexmedetomidine. A reasonable alternative to a bolus dose of dexmedetomidine is to initiate an infusion at 0.6 to 0.7 mcg/kg/h and adjust the infusion rate by 0.1 to 0.2 mcg/kg/h, at intervals no more frequent than every 30 minutes. This should minimize hemodynamic fluctuations. Figure 7.2 is an example of transitioning from propofol-based sedation to dexmedetomidine. This approach should optimize comfort while dexmedetomidine achieves target sedation. Due to frequent dosage adjustments during this transition, a protocalized approach can help to guide bedside nurses.

c.   Dexmedetomidine doses exceeding 1.5 mcg/kg/h offers minimal benefits. Traditional agents, antipsychotics, should be incorporated into the regimen to augment dexmedetomidine if this rate is reached. Dexmedetomidine may be discontinued abruptly in most patients. Withdrawal syndromes characterized by agitation and tachycardia can result in discontinuation of long-term infusion, and dexmedetomidine weaning may be required. Dexmedetomidine use is limited by its inability to produce deep sedation and hypotension and bradycardia. The most common intervention is to interrupt the infusion, administer atropine or glycopyrrolate. Of note, high-dose dexmedetomidine has dose-dependent respiratory side effects: It affects hypoxic ventilatory control and can induce upper airway obstruction.

a.   Benzodiazepines are potent anxiolytic and sedative medications. They act on GABA receptors and have a dose-dependent pharmacodynamic and toxicological profiles. These drugs have antiepileptic properties and are useful for seizures and alcohol withdrawal. Although benzodiazepines were used as first-line sedatives in the past, recent studies show when used for ICU sedation, these agents are associated with excessive sedation, slow awakening, delayed tracheal extubation, and acute brain dysfunction. Furthermore, benzodiazepines can cause paradoxical agitation and confusion, particularly in the elderly, and have been repeatedly associated with the development of delirium in the ICU. Patients who received prolonged infusions of benzodiazepines are at risk for withdrawal on discontinuation, and slow weaning is required. There is also an association with increased mortality.