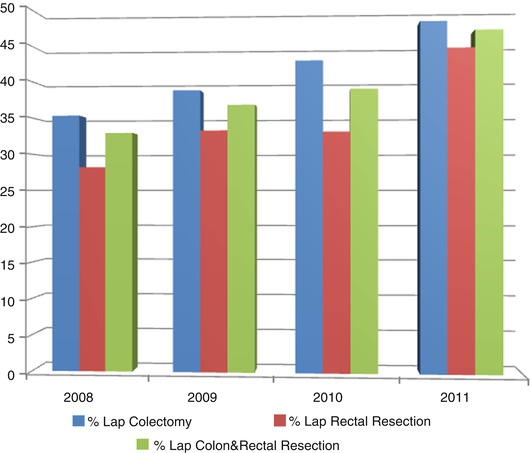 In this chapter the perioperative care of patients who undergo laparoscopic colorectal surgery is presented and discussed focusing on areas of integrative approach. The fundamental perioperative care of the patients who undergo laparoscopic colorectal surgery should be provided not only by surgeons, gastroenterologists, anesthesiologists, and nurses in the wards and the theaters but also by rehabilitation trainers, dietitians, cardiologists, pulmonary physicians, and nephrologists depending on the condition of the patients. A transdisciplinary approach involving the systemic and active participation of the various specialty members in the perioperative care of the patients is truly indispensable for achieving successful surgical treatment and also obtaining a good quality of life for the patients after surgery.

First, the small surgical wound created in laparoscopic colorectal surgery results in less tissue damage than that observed in open surgery. The reduced tissue damage results in lower cytokine and immune responses, which leads to a faster recovery after surgery. In laparoscopic surgery CO2 is used to insufflate the abdominal cavity. By using CO2 insufflation, surgeons can prevent the direct exposure of intraperitoneal organs to the air. Exposure of the intraperitoneal organs to air may suppress immune response which is detrimental to the patient’s postoperative recovery, and performing pneumoperitoneum using C02 may prevent such changes (Hanly et al. 2003). In most previous studies, the amount of blood loss was significantly less in patients undergoing laparoscopic colectomy than in those treated with open surgery. This is due to the ability to precisely observe the intraperitoneal organs and tissue using the laparoscope and meticulous operative maneuvers. Reducing the amount of blood loss is beneficial for improving the patient’s recovery from the surgical intervention. Open colectomy involves the manual manipulation of the intestines by the surgeons which induces a significant inflammatory response, possibly leading to paralytic ileus and postoperative adhesions of the intestine (Schwarz et al. 2004). Because the amount of bowel manipulation in laparoscopic surgery is much less than that observed in open surgery, the invasiveness of laparoscopic surgery is considered to be minimized.

Surgical intervention is generally considered to result in the suppression of cell-mediated immunity, an increased level of cytokines, and an enhanced inflammatory response. It has been reported that in patients undergoing laparoscopic colectomy, the postoperative rise in levels of IL-6, IL-8, IL-10, and CRP is less than observed in open colectomy (Wichmann et al. 2005). This finding is considered to be due to the reduced invasiveness of laparoscopic surgery comparing to open surgery.
In our previous study comparing laparoscopic vs. open surgery with respect to the cytokine response and inflammatory changes, the rise in the IL-6 levels was significantly lower in the lap colectomy than in the open colectomy group. Similar data have been reported in a number of previous papers. As for the hormonal response, the rise in the ADH and ACTH levels did not differ between the laparoscopic group and the open surgery group (Fig. 8.3) (Ozawa et al. 2000). 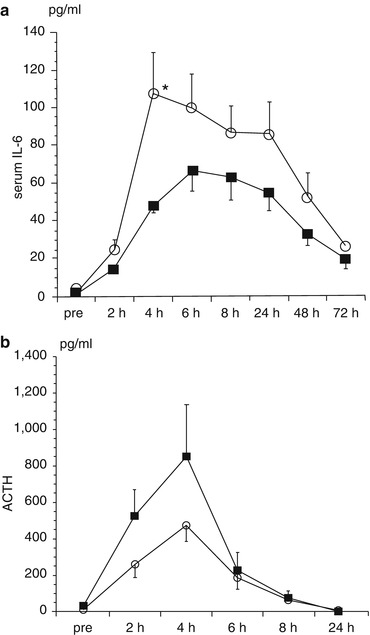 The evaluation of surgical risks in patients undergoing laparoscopic colectomy is usually performed in a similar manner to that of open surgery. There is a tendency toward longer operation time in cases of laparoscopic colorectal surgery. Performing pneumoperitoneum using CO2 may cause hypercapnia and decrease the cardiac output. Therefore, in patients with severe cardiovascular and pulmonary dysfunction, the indication for laparoscopic colorectal surgery should be carefully evaluated.
There are several assessment tools commonly used to evaluate surgical risks. Some of these tools require specific assessment and interventions using an integrative and team-based approach. Various factors including symptoms, comorbidities, and laboratory data have been identified to be important surgical risk factors. The patient’s age itself may not be a risk factor; however, comorbidities and frailty associated with old age are considered to be risk factors in surgical patients. The followings are representative operative risk assessment tools.

This is the most widely used scoring system (Bowles et al. 2008). This scoring system classifies patients into five categories and determines the surgical risk based on a simple assessment of the patients’ condition; therefore, it is easy to use. The mortality rates for and ASA status of I, II, III, and IV have been reported to be 0.08, 1.8, 7.8, and 9.8 %, respectively. In general, conducting preoperative assessments of patients with a Class II or III status is important. Although widely used, this scoring system is a crude method of assessment and offers little opportunities of developing specific preoperative interventions for higher-risk patients.

8.3.1.2 Physiological and Operative Severity Score for the Enumeration of Mortality and Morbidity (POSSUM, CR-POSSUM)

The efficacy of the POSSUM score in predicting the postoperative outcome has been proven. This scoring system is widely used due to its relative simplicity and proven efficacy. There are 12 preoperative and six intraoperative variables including age, respiratory and cardiac comorbidities, ECG, blood pressure, BUN, Hb, WBC, grade of operative intervention, amount of blood loss, and the presence of malignant tumors and intraperitoneal bacterial contamination (Copeland et al. 1991). In the scoring system, the postoperative morbidity and mortality rates are automatically calculated. The CR-POSSUM was subsequently developed using multivariate models of colorectal surgery based on the same principles (Tekkis et al. 2004).

This index is more commonly used by geriatricians. It gives each comorbidity a different weight according to the long-term outcome of patients with that particular comorbidity, which is helpful for quantifying comorbidities in elderly patients (Charlson et al. 1987). Our recent study of colorectal surgery patients showed that the risk of postoperative comorbidities was almost four times higher if the weighted comorbidity index score is 5 or greater (Tan et al. 2009).

“Frailty” is a new concept for assessing the surgical risks of elderly patients. It is interesting to note that some elderly patients without comorbidities may exhibit higher frailty index. The presence of frailty is determined based on the activity level, grip strength, and walking speed and others as suggested by Fried et al. (2001).
The assessment of comorbidity index and frailty do not fall within the usual competence of a standard surgical team. Individuals trained in the assessment of geriatric patients may be more appropriate. Nonetheless, they may well offer more sensitive measures of increased perioperative vulnerability. It is becoming clearer that these assessments may become indispensible in the assessment of the elderly surgical patient. Integrating individuals well versed in geriatric assessment into the surgical team may well be advantageous.

8.3.2 Decompression of the Colon Proximal to the Tumor Causing Stenosis

Stenosis or obstruction due to colorectal cancer should be dealt with somewhat differently than using open surgery. This is because the ability to expose the operating field during laparoscopic procedures is difficult in the presence of distension of the large or small bowel or both. Therefore, in cases of laparoscopic colorectal surgery, stenosis or obstruction should be managed to resolve distension in the bowel proximal to the tumor. When there is stenosis without symptoms of bowel obstruction, the patient is advised to stop taking solid food and to consume only liquids. This allows the feces accumulated in the bowel proximal to the tumor to be eventually passed through the stenotic segment. It usually takes approximately a week for the accumulated feces to pass through the stenosis.
On the other hand, when there is obstruction due to a tumor, decompression of the distended bowel proximal to the tumor should be attempted before resection. The most effective way to decompress the bowel is to either construct a stoma or place a self-expandable colonic stent via a colonoscopic procedure. Stenting is effective for achieving decompression and is useful as a bridge to surgical resection. The procedure requires a high level of technique and is usually performed by a well-trained colonoscopist to avoid complications during stent insertion (Fig. 8.4) (Sarkar et al. 2013). Therefore, collaboration between surgeons and endoscopists is essential. There are certain limitations associated with this procedure. When the tumor is situated around the acute bend of the colon, inserting the stent is technically difficult. In addition, if the obstruction is severe and it is not possible to pass a guidewire through the tumor, it is technically impossible to place a stent. As for the site of the tumor, the patients with mid to lower rectal tumors are usually not indicated for stenting. This is because the distal portion of the stent may project into the lower rectum causing difficulty performing rectal resection. Although not always unsuccessful, performing stent insertion of the transverse or the right colon can be difficult due to the instability in colonoscopic manipulation. Although there are technical problems and the long-term outcomes of colon cancer patients who undergo stenting as a bridge to surgery are still controversial (Sabbagh et al. 2013), colonic stenting is an effective modality for decompressing the obstructed colon before laparoscopic surgery. 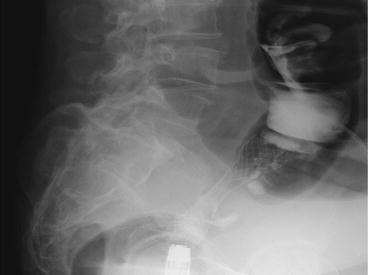