Cervical radiculitis affects approximately 83 per 100,000 people per year.1 The most common causes of cervical radiculitis in this study were herniated disk in 21.9% and spondylosis in 68.4%. Anderberg and colleagues2 described the method of a cervical diagnostic SNRB technique and assessed its ability to correlate clinical symptoms with MRI findings in patients with cervical radicular pain and a single level degenerative disease.

•   The majority of those affected did not undergo surgery.

•   Outcomes were favorable in both surgically and nonsurgically treated groups without reproducible significant outcome differences of one treatment over the other.1–3

•   The favorable outcome from cervical radiculitis from herniated disk may be due in part to the natural regression of disk herniation over time.4,5

•   However, well-designed randomized trials of surgical and nonsurgical outcomes for specific diagnostic entities have not been performed.

•   Current treatment strategies typically involve a gradual progression in the aggressiveness of intervention, progressing from less to more invasive interventions only in refractory cases.

The cervical spine consists of seven vertebrae, eight nerves, and two vertebral arteries that supply the posterior aspect of the brain contributing to the circle of Willis (Figure 16-1). 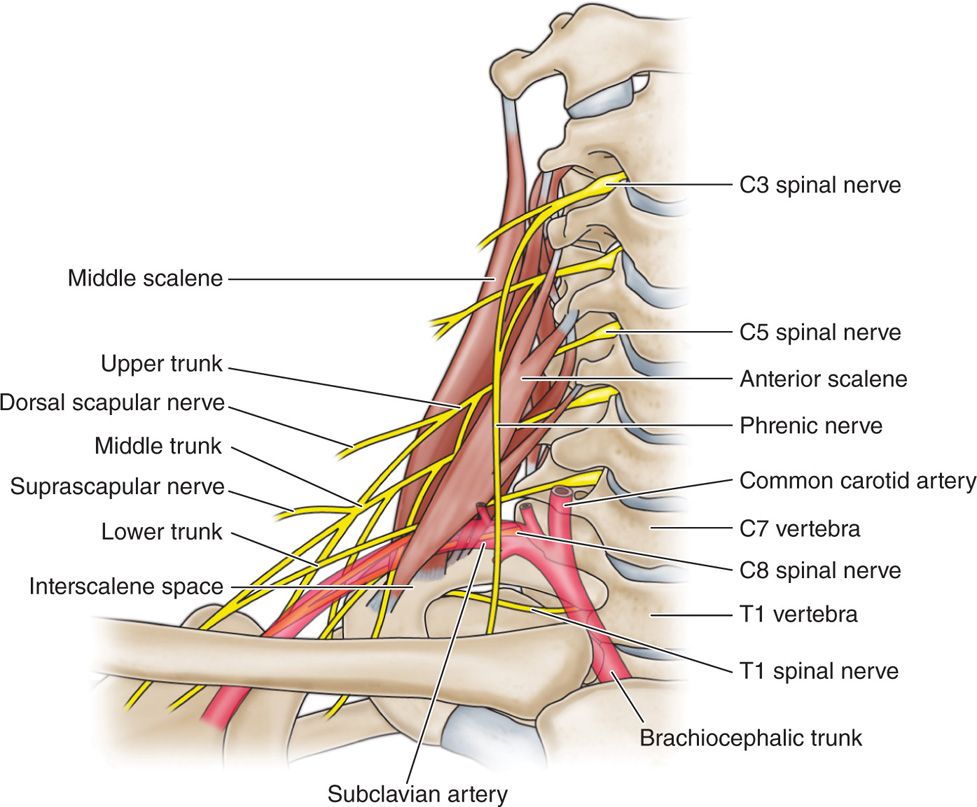 •   The epidural space is triangular extending from the foramen magnum to the sacral hiatus. The inner border is the thecal sac-dura mater.

•   The outer border is the bony spinal canal and the covering periosteum.

•   The lateral border is the pedicle and intervertebral foramen.

•   The ligamentum flavum is fused in the midline in approximately half of individuals and the interspinous ligament is absent.

•   Rootlets arise from the cord to form ventral and dorsal nerve roots that exit with the thecal sac covered with the dura root sleeve.

•   The dura ends at the proximal margin of the dorsal root ganglion.

•   The ventral and dorsal roots coalesce to form the spinal nerve that exits from the foramen.

•   The dura extends as the epiradicular sheath covering the dorsal root ganglion and spinal nerve.

•   The spinal nerve is located in the inferior aspect of the foramen.

•   The foramen is formed by the superior and inferior pedicle.

•   The superior articular process of the zygapophyseal joint forms the posterior wall.

•   The anterior wall is superior vertebral endplate and disk.

•   The spinal nerve is posterior to the vertebral artery.

•   The vertebral artery arises from the subclavian and enters the costotransverse foramen at C6 and exits at C1 but can enter at C5 (Figure 16-2).

•   The vertebral artery crosses posterior to C1 arch before entering the skull through the foramen magnum.

•   The anterior spinal artery is divided into cervical, thoracic, and lumbar segments (Figure 16-3).

•   Spinal arteries arising from the vertebral, subclavian, and ascending cervical and deep cervical arteries enter through the foramen and divide into the anterior and posterior cervical radicular arteries.

•   These radiculomedullary arteries are larger and may ascend and descend within the thecal sac supplying the anterior spinal artery (see Figure 16-3).

•   In the cervical region a variable number of radiculomedullary arteries are present and may enter anywhere from C3 to C8.

•   The radicular and radiculomedullary arteries may be located posterior to the spinal nerve in the posterior-inferior aspect of the foramen, close to the target zone of transforaminal injections (Figure 16-4).

•   Because the vertebrobasilar artery is the posterior contributor of the circle of Willis, it is important to understand that any injection performed may have serious consequences (Figure 16-5). 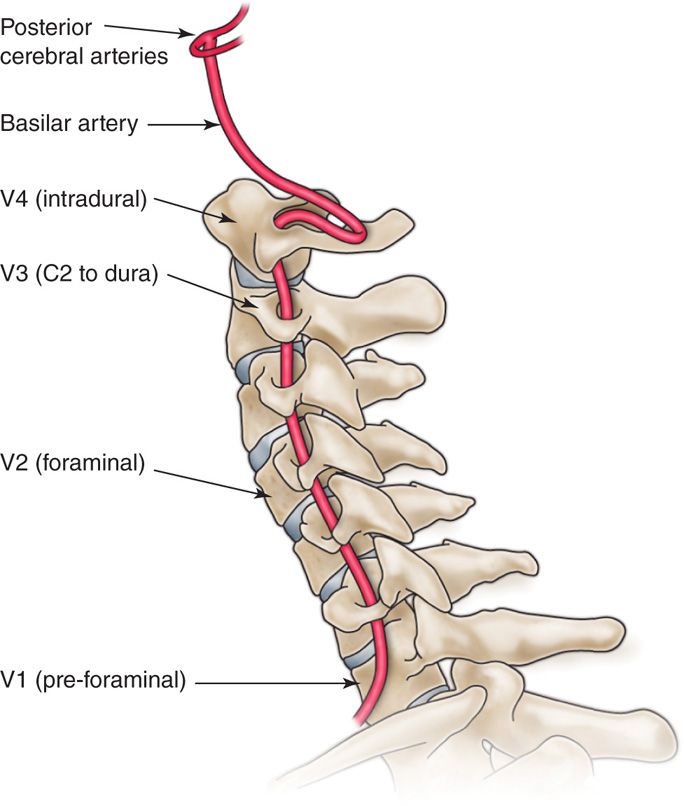 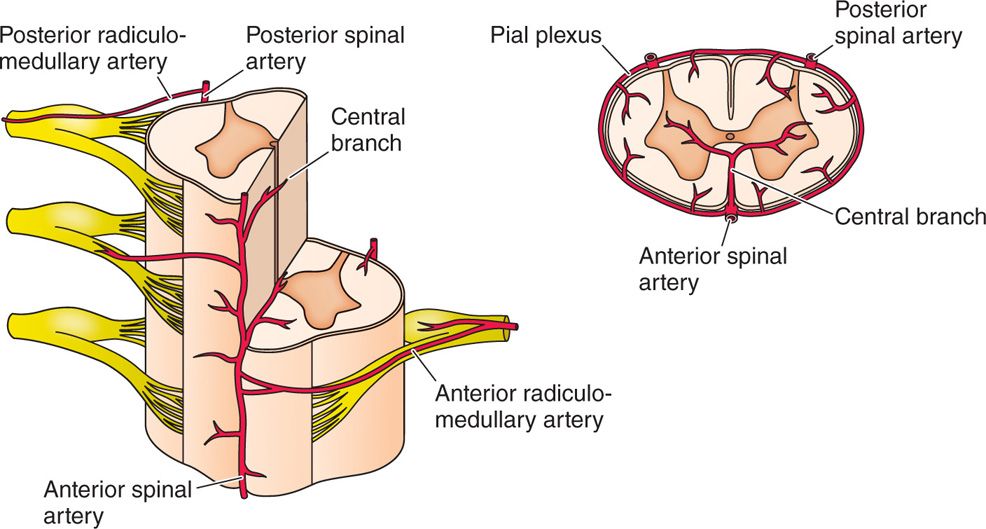 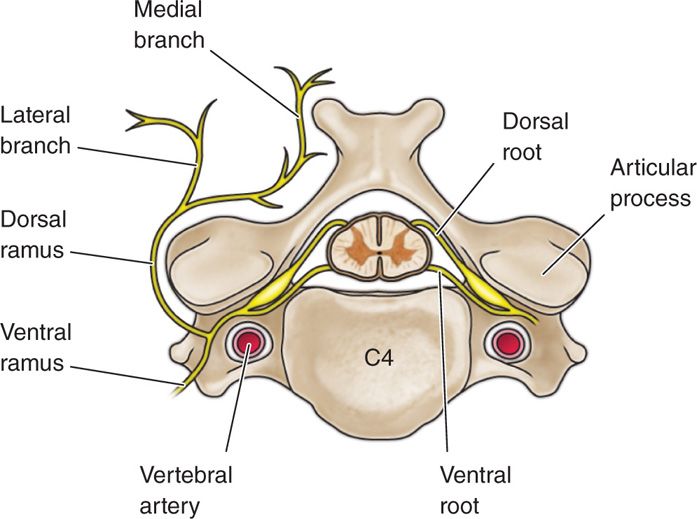 Figure 16-4. Semidiagram of the spinal, or central, end of a segmental nerve, after removal of the meninges, showing relationship to vertebral artery. 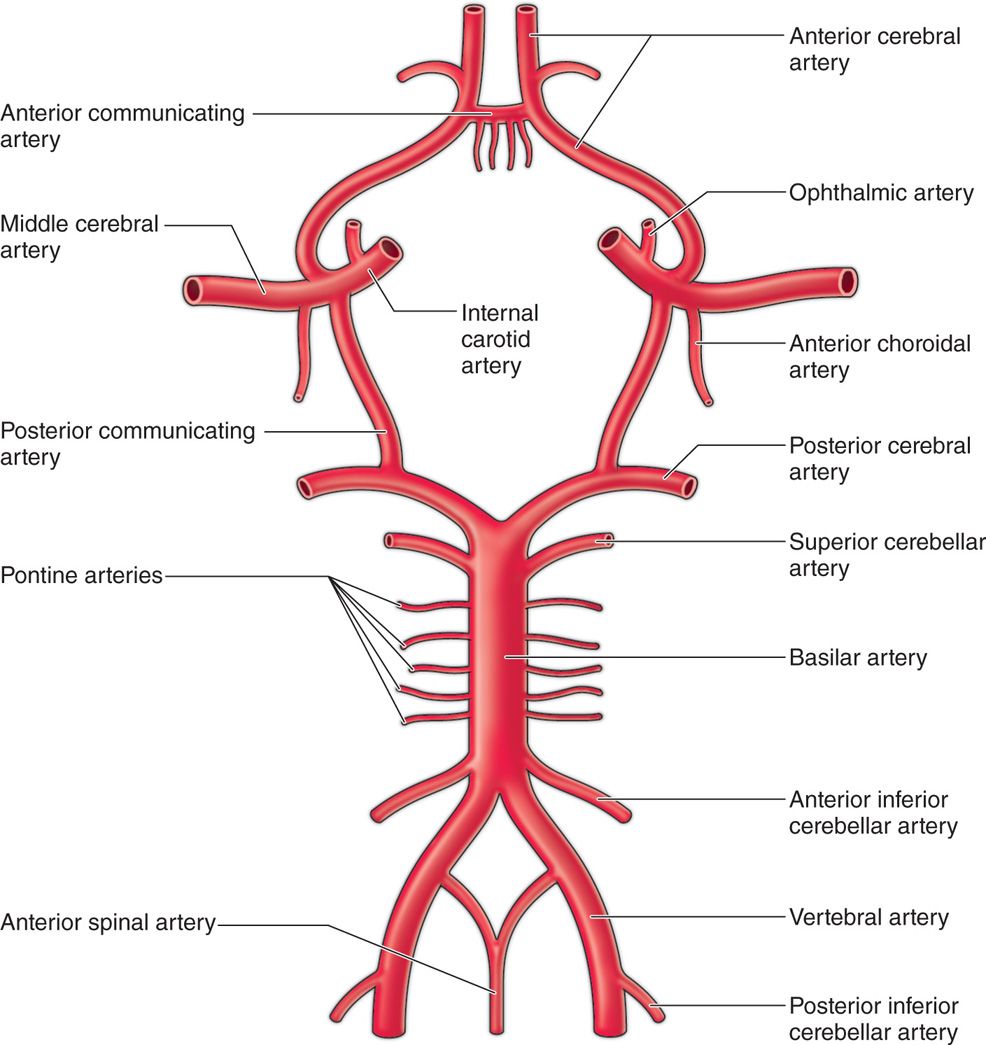 •   It is each one of these arteries and veins that is a concern when a transforaminal injection is performed.

•   Baker et al7 has shown that without subdigital angiography an injection into an artery can occur with potential devastating effects.

Recent case reports and literature reviews have questioned the safety of performing cervical transforaminal epidural steroid injections.6,7 Various theories have been postulated to account for more severe complications occurring after cervical transforaminal epidural steroid injections, which have been reported to include cerebellar herniation, and anterior spinal syndrome resulting in paralysis, stroke, and death.8

Huntoon performed an elegant anatomical study of 10 cadavers that demonstrated the presence of ascending and deep cervical artery branches in the posterior intervertebral foramen that would be in the path of the classic approach to cervical transforaminal epidural injections.10

•   Treatment of pain from a compressed nerve root

It is of primary importance to perform a detailed history and physical on the patient presenting for a selective cervical nerve root block. Understanding the correct dermatome of the pain pathway is important to understand the contributing nerve roots in presenting pain pattern.

•   The physical examination should focus on the neurologic aspect of the pain pathway.

•   Evaluate for motor strength, sensory deficits, and whether the symptoms correlate with the pain pattern.

•   In patients with neurological deficits, must review MRI study before considering the procedure.

•   For those who can not have MRI, a CT or CT myelogram would be an alternative examination to review.

•   Bone scans are helpful when there is a suspicion of bone disease, cancer, infection, unrecognized fracture, or benign tumors.

After reviewing the objective data such as an MRI or a CT scan of the anatomical location, create a differential diagnosis of the suspected pathology. In order to affirm the suspicion, a selective nerve root block of the level in question can be initiated.

Basic concerns for injection are:

•   Immunocompromised patients are potentially at high risk for infection, which is of particular relevance in patients with malignancy. In this instance, the physician may direct the care to a specialist for further work up and a treatment plan.

•   Patients may have thrombocytopenia secondary to chemotherapy, coagulation disorders, and using anticoagulants for precautionary conditions such as: stroke prevention, arrhythmia disorders, and peripheral vascular disease.

•   Patients with allodynia who could benefit from this injection may also have pain in the very area of the injection that could complicate the ability of one to tolerate the procedure.

According to the Washington State Department of Labor and Industries’ review criteria for cervical surgery for entrapment of a single nerve root (2004), a positive response to SNRB that correlates with imaging abnormality is needed if there are complaints of radicular pain with no motor, sensory, reflex, or electromyographic changes. An SNRB may be considered “positive” if it initially produces pain in the distribution of the nerve root being blocked and produces at least 75% reduction in pain for a duration consistent with the type of local anesthetic used for the block.13

•   Coagulopathy that cannot be treated or temporarily halted for the injection

Either a supine or lateral approach is used for what one would describe as the “classic” approach albeit there is no “real” classic approach to accessing the epidural space from either a lateral to medial access versus medial to lateral technique with a catheter. Sedation is a matter of choice from a comfort and safety point of view.

•   With the neck turned approximately 25 to 30 degrees to the opposite side, the area is prepped with betadine and alcohol.

•   The fluoroscopy is used to identify the bony landmarks in AP view, and check in AP, lateral and oblique views as needed.

•   A 25g, 2 inch needle advanced with a trajectory to the posterior aspect of the foramen.

•   With direct visualization, one should contact the lamina and carefully enter the foramen and stop.

•   The needle position should be checked in an AP view on the fluoroscope to determine that the needle has not entered beyond the mid line of the pedicle.

•   Should a paraesthesia occur, one should retract the needle and inject a nonionic contrast such as Omnipaque 240 or IsoVue 200M.

•   If the posterior approach is chosen via the interlaminar, then the access route is performed with a Coude needle from EpiMed (Farmers Branch, TX).

•   Enter the epidural space by either a hanging drop technique or a loss of resistance.

•   Next step is to place a feather-light catheter into the epidural space and guide the tip to the foramen of the designated target.

•   Once at the level in question is approached, slowly inject the contrast agent of choice and visualize the enhancement of the nerve root.

•   If the injection is of diagnostic value, inject the nerve with 1 cc of the local anesthetic of choice and observe for distal spread.

•   If not sedated, the patient should describe warmth and a feeling of pain alleviation at the dermatome.

•   On the other hand, if this is a therapeutic treatment, then the placement of a steroid compound would be appropriate at this time.

•   Again observance of the least amount of medication possible due to the fact that the foramen is compromised already (Figures 16-6 to 16-8). 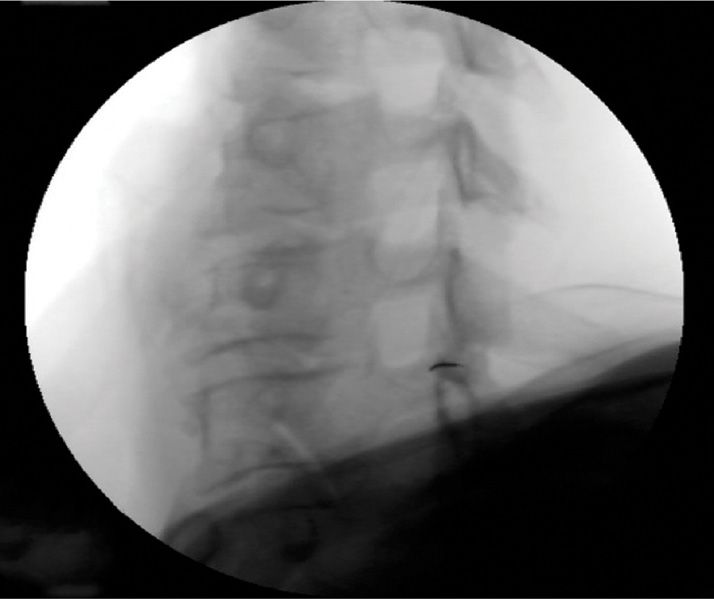 Figure 16-6. The anterior approach: both of these utilize entering from a lateral entrance to the medial aspect of the targeted nerve root. 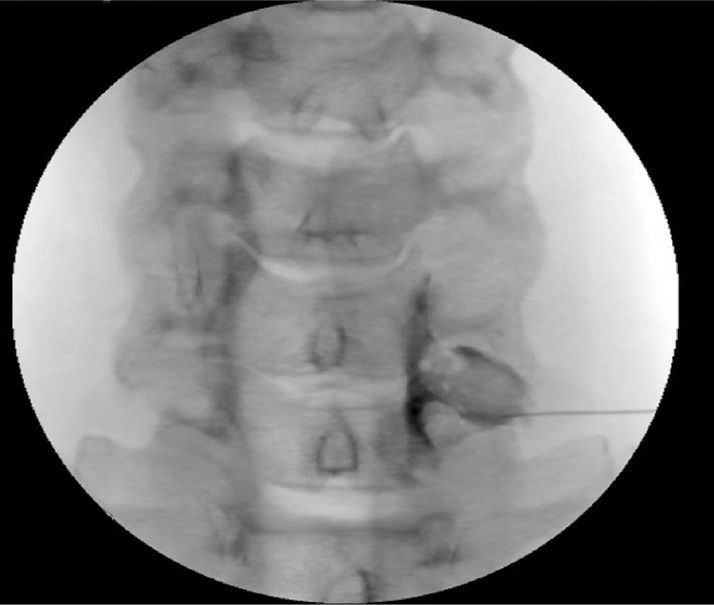 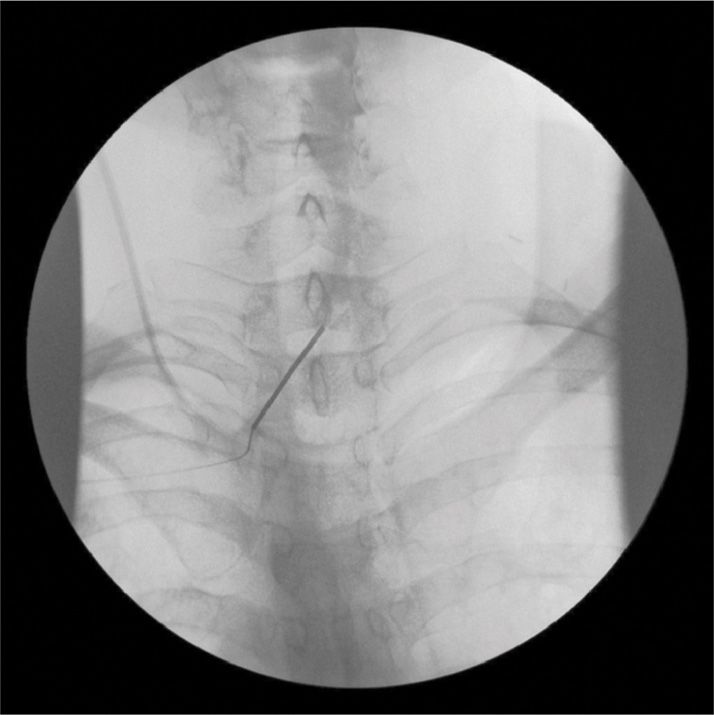 Figure 16-8. Each of these meets the same objective of accurately placing medications at the targeted area but safety becomes the issue. As noted earlier with the Dreyfuss picture, a lurking artery may challenge the operator when injecting a substance such as a local anesthetic or steroid.

The common injectate solutions are:

•   Local anesthetics that block the sodium channel, completely halting the electrical impulse conduction in peripheral nerves, spinal roots, and autonomic ganglia. Lidocaine is the agent of choice with several concentrations to utilize—0.5%, 1%, 1.5%, and 2%.

•   For diagnostic purposes, using a basic concentration of 1% will give a sensory blockade without the motor impairing effects.

•   For diagnostic purposes only a local anesthetic should be used to confirm pain alleviation of the affecting nerve root (Table 16-1).

TABLE 16-1. Local Anesthetic Should Be Used to Confirm Pain Alleviation of the Affecting Nerve Root

•   Be aware of false loss of resistance between interspinous ligament and ligamentum flavum.

•   Ligamentum flavum is thinnest in cervical region and thickest in lumbar region.

•   Use appropriate accessories for proper patient positioning for patient comfort and safety of the procedure.

•   Be careful in elderly patients with osteoarthritis and who has history of atlanto-axial subluxation with spinal instability.

•   Use only nonionic, hydrophilic monomer with low osmolality contrast like iohexol (Omnipaque) and iopamidol (Isovue).

•   While advancing the needle with trajectory to posterior aspect of foramen, it is important to impinge the needle on bone to avoid the disastrous complication of spinal cord injury.

Transforaminal selective nerve root blocks have been purported to be more efficacious than the interlaminar approach.6 The vast majority of literature supporting transforaminal steroid injections is confined to the lumbar spine due to reports of catastrophic complications occurring in the cervical spine. Scanlon and colleagues recently reported a survey in which 78 complications were reported with the transforaminal approach to the cervical epidural steroid injection.7 The most serious complications included 16 vertebrobasilar brain infarcts, 12 cervical spinal cord infarcts, and two combined brain/spinal cord infarcts.

Epidural steroid injections are efficacious and safe when performed by physicians who have been properly trained in the use of fluoroscopy in neuraxial interventions in select patient populations. Studies that suggest that epidural steroids are not efficacious in patients with cervical radiculopathy and postlaminectomy syndrome have been primarily based on studies performed by inexperienced physicians, that did not employ fluoroscopy, and were not double blind. There are no well-designed quality studies to support abandoning epidural steroid injections in patients with axial cervical pain. Epidural selective nerve root injections offer clinical relevance when performed at the targeted nerve root and when diagnostic information is needed and desired to understand where the etiology of the patient’s pain is derived from. No matter which approach is actually utilized, the term of adherence remains the same—“vigilance” is of utmost importance.