Transforaminal approach to the epidural space has been utilized for several decades for proper placement of injectates at the site of inflammation. Initially called selective nerve root blocks, these injections are more recently called transforaminal injections. The main advantages include (1) ability to place the medication closer to the area of the pain generator and inflammation (the neuro-discal interface) and (2) the use of less medication to achieve similar or better results than an interlaminar approach.

Following are some of the specific indications for these injections:

•   Lumbar radiculopathy (radiculitis) secondary to various causes such as

The lumbar intervertebral foramen is the exit route for the spinal nerve roots at all the levels. The anatomic boundaries are:

•   Lamina and the inferior articular process of the superior vertebra posteriorly

•   The spinal nerve root and the dorsal root ganglion and the sinuvertebral nerve.

•   The radicular artery (segmental artery) (Figure 22-4). These arteries are not fixed in their position relative to the foramen. These arteries enter the spinal cord through the nerve. One of the largest arterial branches is called the arteria radicularis magna (Artery of Adamkiewicz), which enters the spinal canal anywhere from the T9 through L1 levels. It merges with the anterior spinal artery, usually at about T4-T6 level to supply the anterior position of the spinal cord. As it is an end-artery (without anastomoses), blockage of this artery can lead to paralysis. 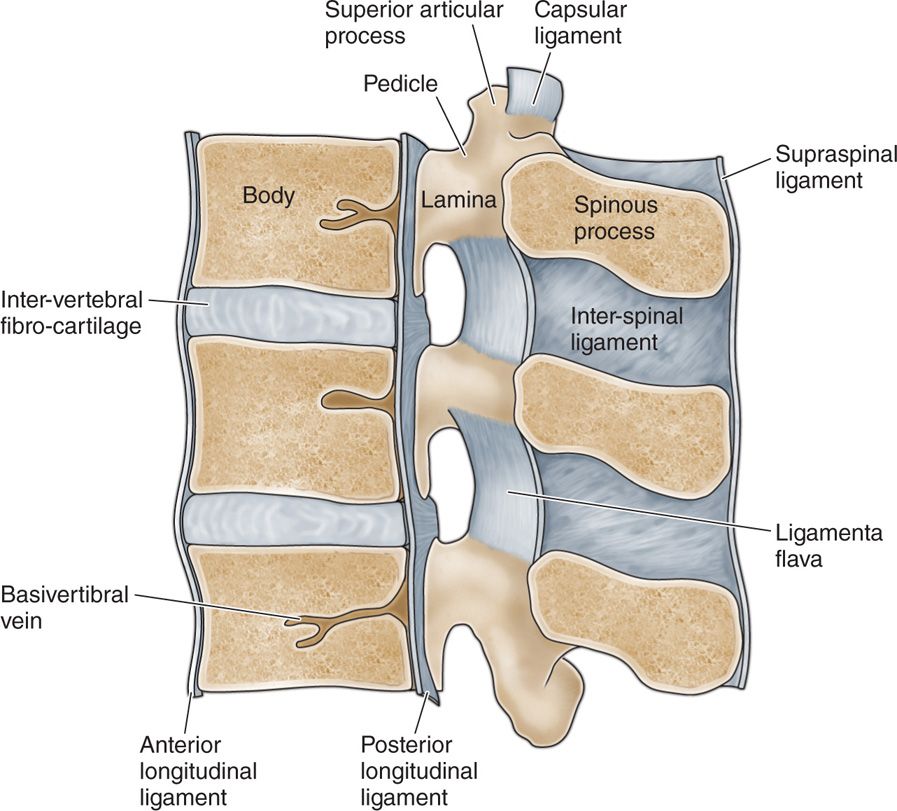 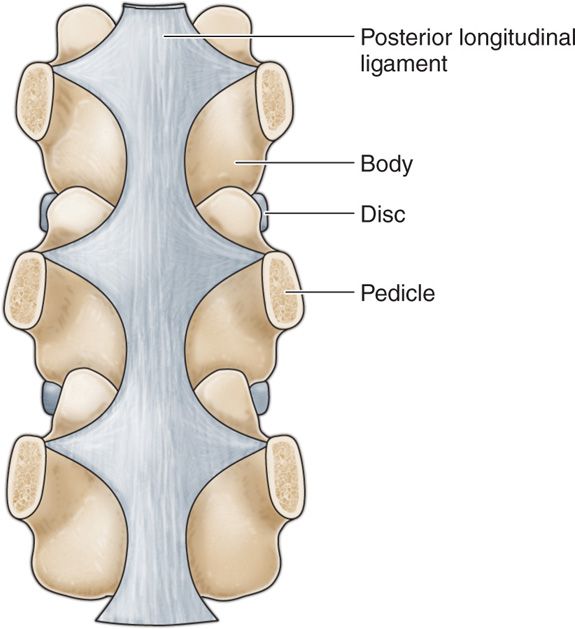 The contents of the lumbar spinal intervertebral foramen include: 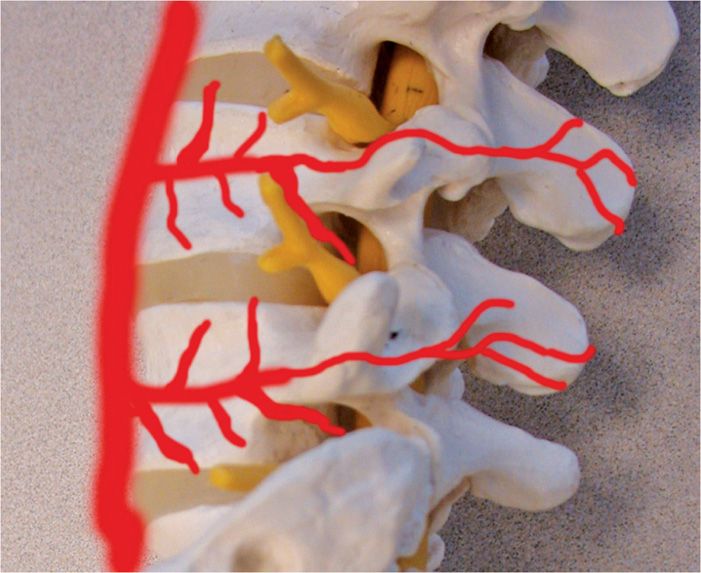 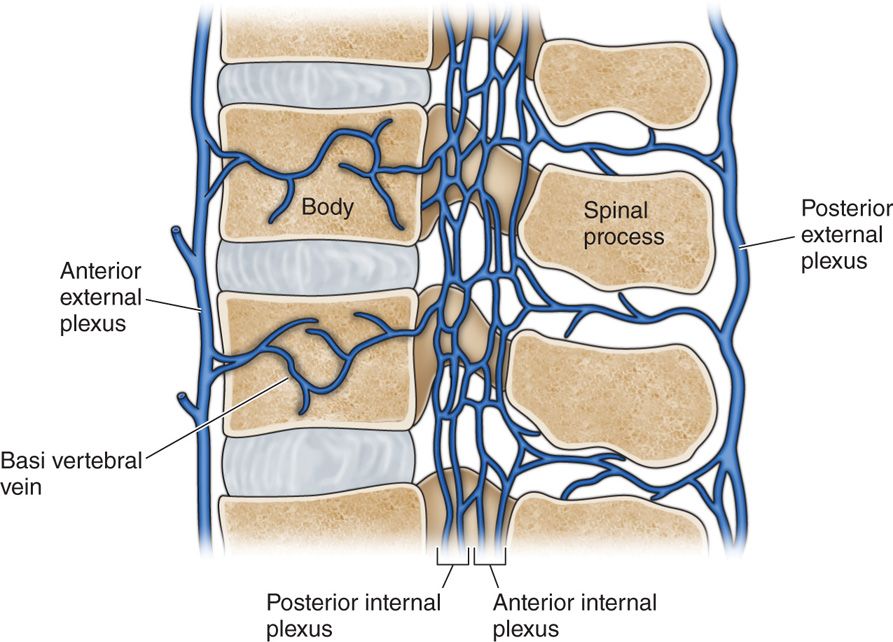 •   The so-called “safe triangle” (Figure 22-6) is the area posterior and inferior to the exiting nerve root.

•   It can only be considered safe in relation to the nerve root as an undisplaced nerve root. It is usually inferior to the pedicle cephalad but this triangular space also contains the artery as well as veins which can lead to intravascular penetration by the needle.

•   Some physicians advocate the use of a blunt needle for the performance of the transforaminal injections. This school of thought postulates that a “blunt” needle may be safe as it may have less of a chance of penetrating a blood vessel or nerve.

•   However, this does not substitute the use of live fluoroscopically directed injection of contrast medium before injection of the corticosteroid.

•   It has also been thought that a nonparticulate steroid may be safer for such transforaminal injections as the particulate material may lead to blockage of the segmental artery in case of inadvertent intra-articular injection and cause spinal cord ischemia.

•   It is the author’s belief that a blood vessel is relatively “fixed” within the confines of the intervertebral foramen and is relatively immobile thus making it easy for a needle to cannulate it and that the blood vessels are relatively mobile outside the foramen making them difficult to cannulate with a needle (similar to stabilizing a vein prior to starting an IV access).

•   Hence letting the needle tip remain outside or at the rim of the foramen and letting the injectate travel transforaminally may provide added safety against intra-arterial injections. 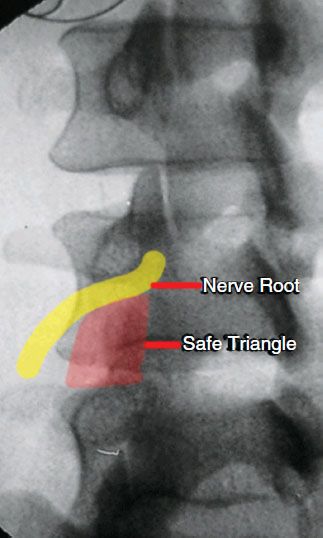 Figure 22-6. “Safe triangle.” This so-called safe zone only means that an undisplaced nerve root may not be encountered by a needle in this area. However, this area can contain the blood vessels which can prove this zone to be quite unsafe if a blood vessel is damaged or penetrated and injected.

•   One could potentially damage a nerve root or have an intra-vascular injection with a transforaminal approach.

•   Main contraindications include local infection, large disc herniation with significant foraminal encroachment and lower extremity weakness (which in itself is an indication for surgical decompression).

•   Some relative contraindications are allergy to the iodine contrast material, which can be avoided with proper preoperative preparation with steroid and antihistamine taken orally and inability of a patient to lie down prone.

•   When a patient has a true contrast allergy, noniodinated contrast can be used, or the procedure can be performed without the aid of contrast.

•   Preoperatively, a review of the MRI scan can help determine if there is enough space around the nerve root for this procedure and to help correlate the level of pathology to the patient’s pain.

•   Patient education is a must, especially about the possible complications that may result from such a procedure.

•   Patient’s body habitus and the weight should also be considered as a large patient will not only require a longer needle but will also provide less space between the body and the fluoroscopy unit for the placement of the needle.

•   Possibility of nerve root displacement posteriorly by a herniated disc can lead to inadvertent paresthesiae during needle placement and the patient should be warned of such an occurrence.

•   Deep sedation for this procedure is not recommended and an awake patient may be able to respond to intraneural placement providing some safety.

•   Mild sedation such as with conscious sedation technique may be appropriate for some patients who are apprehensive about the procedure.

The most important aspect of the procedure is obtaining a proper fluoroscopic view prior to staring the procedure. Understanding the radiological anatomy of the spine is a must.

•   The fluoroscopic view is first optimized for the level of intended needle placement. This is also referred to as “squaring” the level, which basically places the x-ray beam perpendicular to the intended intervertebral level thereby squaring off the superior and inferior vertebral end plates. (Note: I would like a picture/drawing of this with a fluoro and patients end plates aligned.)

•   The view is then further optimized with an oblique angle so that the articular elements divide the intervertebral disc by one-third to two-thirds. The classic “Scottie dog” view (Figure 22-7).

•   This view emphasizes the placement of the needle at the 6 o’clock position below the pedicle of the superior vertebra. The needle tip is then placed within the posterior-superior quadrant of the intervertebral foramen.

•   Too much of an oblique view can lead to damage to the paraspinal structures such as the ureter and the kidneys, where as a view that is not optimally oblique can prevent the needle from entering the foramen altogether.

•   The needle is placed initially under an oblique view and once the trajectory of the nerve is optimized towards the target area, the view is changed to lateral so that the needle can be advanced in lateral view thus preventing the needle from going too far anteromedially and touching the nerve root (Figure 22-8).

•   The needle is halted just as it enters the intervertebral foramen.

•   Contrast medium is then injected using a live/intermittent fluoroscopic views to confirm proper placement and to identify any intravascular spread.

•   The view is then changed to anteroposterior and further contrast is injected (Figure 22-9).

•   The injectate can spread along the nerve root with or without any epidural spread depending on the foraminal obstruction as well as the placement of the needle tip. Figure 22-10 shows epidural spread of the contrast.

•   A retrodiscal approach has been recently recommended where the needle is placed within the inferior aspect of the foramen rather than the superior posterior quadrant described in the classic method of transforaminal injection. The presence of radicular arteries along with the nerve root has prompted the use of this approach. 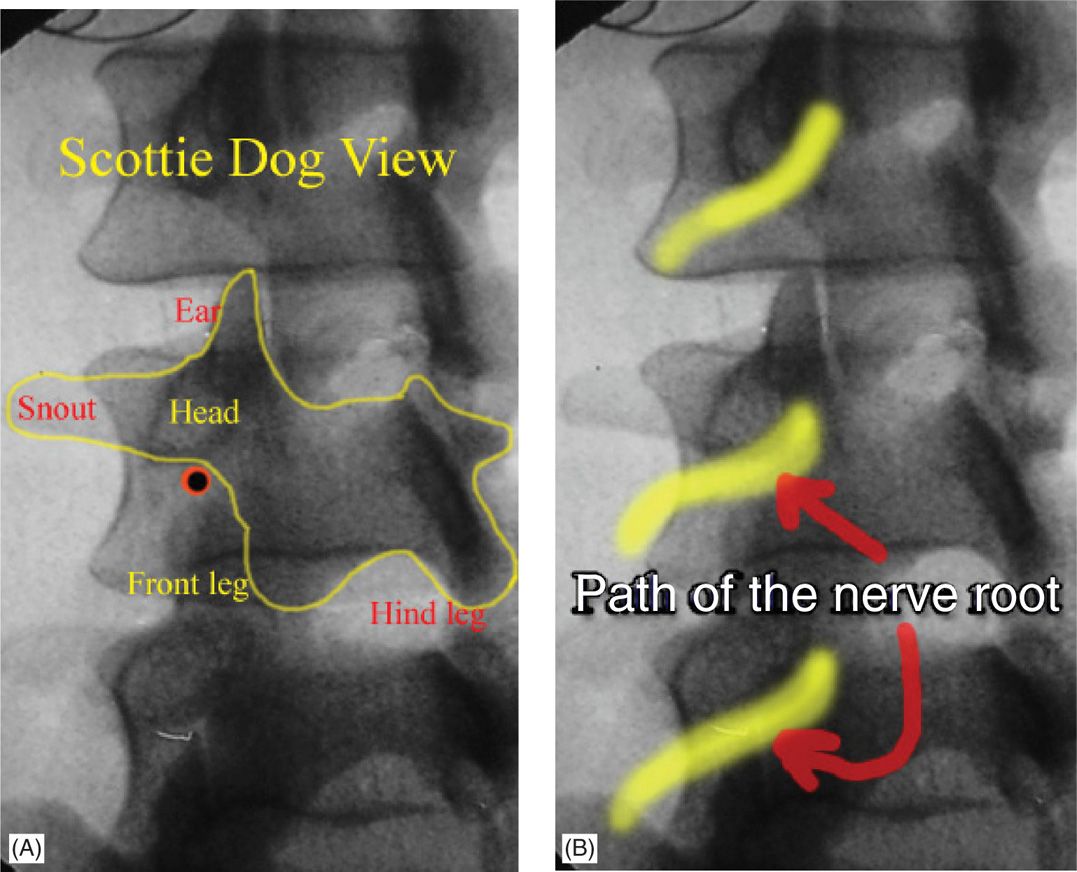 Figure 22-7. (A, B) The classic “Scottie dog” view which is obtained using an oblique view. The degree of obliquity will depend on the patient and the level of the spine and should not be considered as fixed for a certain angle. The dot under the chin of the dog denotes the entry point for the transforaminal approach which will place the needle lust posterior to the nerve root. Note the articular elements bisecting the disc above by one-third laterally and two-thirds medially.

Figure 22-9. (A, B) Anteroposterior views of the same patients as in Figure 22-8. Note the contrast material spread along the nerve roots. In case of an intravascular spread, the contrast will not project the same silhouette after a few seconds and in live view it can be seen taken up by the blood stream. 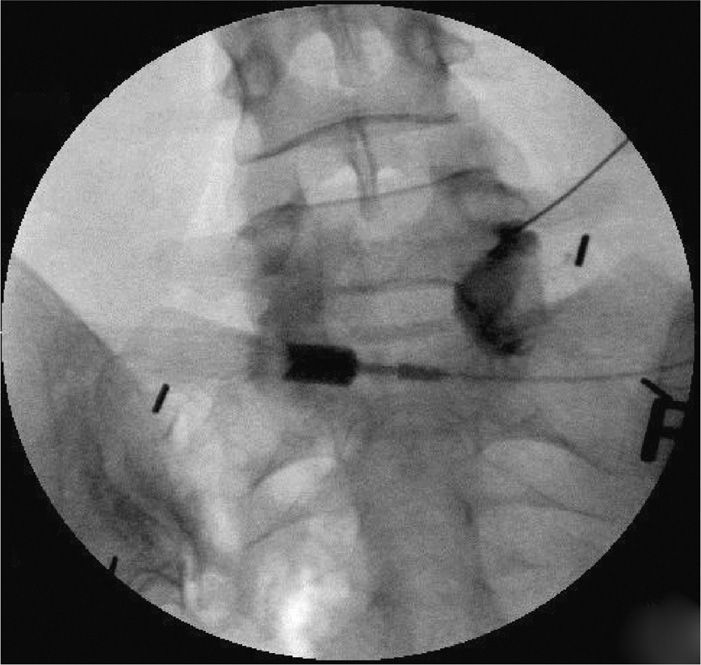 Figure 22-10. Epidural spread of the contrast from a transforaminal injection without much extra-epidural spread.

The equipment required for this procedure is no different than most of the interventional procedures for the spine.

•   A fluoroscopic machine or other advanced imaging is necessary. A machine with the capability of digital subtraction angiography (DSA) is now preferred by some practitioners to recognize intravascular injections.

•   Regular kit for prep and drape.

•   Needle choice depends on the physician. A blunt tipped or pencil point needle is recommended by some to minimize the chances of intravascular/intraneural penetration. Others advocate smaller 22-gauge needles to optimize patient comfort and decrease tissue disruption.

•   The length of the needle is based on the patient’s body habitus and the level of the intended injection. A 3.5-in needle is considered standard, but in some cases a 5-in needle may be required for the L5-S1 level. A slight curve at the tip of the needle can help manipulate the needle without multiple penetrations.

•   The amount of injectate should be limited to a maximum of 2 to 3 mL to prevent transient increase in the pressure and to avoid the spread of injectate to multiple levels.

•   Inclusion of a local anesthetic gives fast acting pain relief and can be confirmatory of the level of pathology; however, a patient must be warned of its anesthetic effect and possible weakness in the legs.

•   Patients should be observed in the immediate postoperative period for any signs of spinal cord damage such as lower extremity paresthesiae and weakness with or without increased back pain.

•   Patient may feel increased muscle pain from the needle placement, which can be easily reduced with an ice pack applied at the site.

•   One of the most important aspects of post procedure instructions to the patient is to watch for any lower extremity weakness from the injected local anesthetic.

•   Patients are normally advised to rest for the day and resume normal activities the following day.

•   A patient should also be instructed to report any fever (from infection), increased back pain, lower extremity weakness (from a hematoma) and increased radicular symptoms (from nerve root compression).

•   Increased myofascial pain due to muscle spasms from the needle placement.

•   Loculation of the injectate can also lead to transient increase in perineural pressure. This can be easily recognized during injection if the contrast does not get diluted while injecting the steroid and the patient reports increase in radicular symptoms.

•   Although a dural puncture is less likely form this approach, it can happen if the needle traverses too far within the foramen.