A Review of Mechanisms of Inhalational Anesthetic Agents

Potent Agents
Halothane, enflurane, isoflurane, sevoflurane, and desflurane
Others
Nitrous oxide and xenon
An inhalational anesthetic is a chemical compound possessing general anesthetic properties that can be delivered via inhalation. Agents of significant contemporary clinical interest include volatile anesthetic agents such as isoflurane, sevoflurane, and desflurane as well as certain anesthetic gases such as nitrous oxide and xenon. These agents are liquid at room temperature but evaporate easily for administration by inhalation through vaporizers. They are all hydrophobic, dissolving better in oil than in water.
Other gases that produce general anesthesia by inhalation include nitrous oxide and xenon (cyclopropane is no longer used). They are stored in gas cylinders and administered using flow meters. Xenon is odorless with a rapid onset. It is expensive and requires special equipment to administer and monitor. At 80 % concentration it has anesthetic capabilities. Nitrous oxide, even at 80 % concentration, does not produce a surgical depth of anesthesia at standard atmospheric pressure and is thus used in combinations with other agents.
At hyperbaric pressures, gases such as nitrogen and inert gases like argon and krypton have some anesthetic effect. When inhaled at high partial pressures (>4 bar, at depths below about 30 m in scuba diving), nitrogen can cause nitrogen narcosis [5, 6]. However, the minimum alveolar concentration (MAC) for nitrogen requires pressures of about 20–30 atm (bar). Argon has about twice the anesthetic potency of nitrogen per unit of partial pressure.

The mechanism of action of volatile anesthetic agents is unknown and has been debated for years. While intravenous agents appear to act on a single molecular target, inhaled drugs seem to act at multiple sites. There are thus many theories surrounding the site(s) of action of inhaled anesthetics.
As early as 1847 Ernst von Bibra and Emil Harless suggested that ether acts by dissolving and removing the fatty fraction of brain cells [7]. This hypothesis governed the thinking of the mechanism of action for over 100 years. Meyer proposed that anesthetic potency is related to lipid solubility in 1899. By comparing the potency (defined as the reciprocal of the molar concentration required to induce anesthesia in tadpoles, with the olive oil/water partition coefficient), Meyer proposed a relationship between lipid solubility and effectiveness [8]. Two years later Overton presented a similar theory [8, 9]. The Meyer-Overton theory, as it became known, correlated lipid solubility of inhaled agents and suggested that it is the number of dissolved molecules rather than the specific agent that causes anesthesia (Fig. 2.2). The correlation does hold true for a wide range of inhaled agents with lipid solubilities ranging over four to five orders of magnitude if olive oil is used as the oil phase and can be correlated even more closely if octanol [10] or a fully hydrated fluid lipid bilayer is used as the “oil” phase [11]. These conclusions offer a single mechanism in that as anesthetic agents are dissolved in the lipid bilayers, neurons malfunction at some critical level. Adding to this theory, Mullins felt that molecular volumes should also be added to the equation: the greater the volume, the more potent [12]. By 1973, Miller et al. suggested a critical volume or lipid bilayer expansion hypothesis, supposing that hydrophobic anesthetic molecules gather in neuronal lipid membranes causing distortion and expansion [13]. Membrane thickening could reversibly alter function of ion channels, neuronal density, and fluidity, resulting in anesthesia (Fig. 2.3). 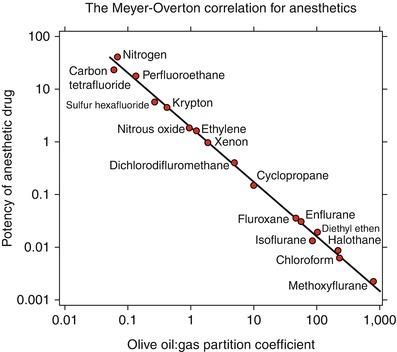 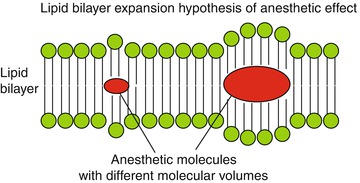 Anesthetic agents with larger molecules cause greater expansion and disruption of the lipid bilayer and thus should be more potent
For almost 100 years, the Meyer-Overton hypothesis was taught and accepted with few additions such as including changes in lateral phase separations, bilayer thickness, curvature, and several other parameters [14, 15]. But as more agents were synthesized, it became apparent that there were at least four weaknesses in the single-mechanism theory [16]:

Stereoisomers may have the same or similar oil/gas partition coefficients but differ greatly in anesthetic potency. While these enantiomers have identical physicochemical effects in the lipid bilayer, in vivo anesthetic action may be far from similar. Although there is identical partition in the lipid layer, there are differential effects on ion channels and synaptic transmission [17]. Thus the primary target for anesthetic agents may not be the achiral (a molecule that is superimposable on its mirror image) lipid bilayer itself but rather stereoselective binding sites on membrane proteins that provide a chiral environment for specific anesthetic-protein docking interactions [17].
2.

General anesthetics stop movement in response to noxious stimulation by depression of spinal cord function and amnesia through higher cerebral depression. Many drugs have high lipid solubility but only exert one function of anesthesia, i.e., they allow amnesia but maintain movement. These nonimmobilizers appear to affect different molecular targets rather than simply the bilipid layer [18].
3.

Changes in membrane density and fluidity caused by anesthetics are very small, and even increases in temperature of 1 °C can have the same effect without loss of consciousness.
Despite these apparent flaws, the correlation of lipid solubility and anesthetic action remains compelling, and a more recent lipid hypothesis has been offered [21]. Mohr et al. suggest that anesthetic effect is caused by solubilization in the bilayer resulting in a redistribution of membrane lateral pressure. Each bilayer membrane has a distinct profile of distribution of lateral pressures, which are large and vary with depth. Membrane proteins, especially ion channels, are sensitive to changes in this lateral pressure distribution profile, which shifts the conformational equilibrium of certain membrane proteins such as ligand-gated ion channels. This mechanism also appears to be nonspecific because potency is determined not by chemical structure but by position and orientation distribution within the bilayer. However, the exact molecular mechanism remains unclear. A lattice statistical thermodynamic model suggests that incorporation of amphiphilic and other active solutes like general anesthetics into the bilayer increases lateral pressure selectively near the aqueous interfaces, compensated by a decrease in lateral pressure toward the center of the bilayer [22]. As a channel tries to open in response to a nerve impulse, the cross-sectional area of the protein closer to the aqueous interface increases. Any increase in lateral pressure shifts the protein conformational equilibrium back to the closed state. Opening of the ion channel in a postsynaptic ligand-gated membrane protein may then be inhibited [22].
It is thus clear that not simply lipids but also the lipid/protein interface is critical to anesthetic action. Franks and Lieb showed a correlation between anesthetic action and soluble proteins. Luciferases and cytochrome P450 can be inactivated by inhaled anesthetics [23]. Thus, these drugs may interact with hydrophobic protein sites as well as membrane proteins through nonspecific interactions, using the lipid bilayer as a mediator. Indeed, anesthetics may alter the function of many cytoplasm signaling proteins including protein kinase C as well as the ion channels. But anesthetics appear to bind more selectively to proteins, involving relatively few, mainly neurotransmitter-gated ion channels. Also the Cys-loop receptors are targets and include inhibitory receptors (GABA A, GABA C, glycine) and excitatory receptors (acetylcholine and 5-HT3 serotonin receptors) [24].
Thus while an understanding of the mechanism of action of inhalation anesthetics is still not understood, it is clearly not a single, unified effect but one that involves both lipids and proteins and especially inhibition of ion channels. Although argon is an inert gas, it, too, can have anesthetic properties suggesting that the mechanism of action of volatile anesthetics may in part be physical, causing swelling of nerve cell membranes from gas solution in the lipid bilayer. However, other theories suggest that inhaled anesthetic agents disrupt synaptic transmission by interference with the release of neurotransmitters from presynaptic nerve terminals, either enhancing or depressing transmission. Or the reuptake of neurotransmitters may be altered by a change in the binding to the postsynaptic receptor sites. Or the ionic conductance change that follows activation of the postsynaptic receptor by neurotransmitters may be affected. Both pre- and postsynaptic effects have been described. Direct interaction with the neuronal plasma membrane is very likely, and indirect action via production of a second messenger also remains possible.

Inhalational anesthesia remains the most commonly employed means to surgical analgesia today.
Enflurane, halothane, isoflurane, desflurane, and nitrous oxide are indicated for the induction and maintenance of general anesthesia. Methoxyflurane is no longer used because of nephrotoxicity. Cyclopropane and ether have been abandoned due to explosion risk. Enflurane is less used because of the advent of the more agreeable agents such as sevoflurane (less pungent) and desflurane (shorter acting). Halothane has also been replaced in large measure by sevoflurane in developed countries; it is still used in many areas for financial reasons. Inhalation anesthetic agents are rarely used alone and other drugs such as opiates, muscle relaxants, and benzodiazepines among others are frequently administered to induce or supplement anesthesia. Because of its weak anesthetic potency and poor muscle relaxant properties, nitrous oxide must be supplemented with another anesthetic or adjunct (such as a barbiturate, benzodiazepine, opioid analgesic, or another inhalation anesthetic) and/or a neuromuscular blocking agent. It is often administered together with another inhalation anesthetic to decrease the requirement for the more potent anesthetic. It may also be used in low dose for procedures not requiring loss of consciousness.
The main indications for the use of inhalation agents are outlined in Table 2.1.

Tags: Essentials of Pharmacology for Anesthesia Pain Medicine and Critical Care
Sep 18, 2016 | Posted by admin in ANESTHESIA | Comments Off on A Review of Mechanisms of Inhalational Anesthetic Agents
Premium Wordpress Themes by UFO Themes
WordPress theme by UFO themes