First synthesized in 1929, mephedrone was not widely abused until it became available commercially in 2003. Following several deaths attributed to its recreational use, mephedrone was first made illegal in the country where most of the drug had been previously synthesized (Israel) in 2008. Prompted by increased use observed by law enforcement, Sweden outlawed mephedrone use later that year. Currently, the drug is illegal in most countries but is still widely available in large quantities over the Internet [3]. Experience suggests that future generations of NPS products will contain both illegal substances and compounds that have yet to be identified and scheduled.
Users of bath salts typically insufflate the dry powder nasally, though it has also been taken orally or rectally, injected, or smoked [4]. These drugs produce subjective effects of euphoria and psychomotor agitation similar to that produced by 3,4-methylenedioxymethamphetamine (MDMA) and cocaine [5] and auditory or visual hallucinations such as those produced by the more classic serotonergic hallucinogens N,N-dimethyltryptamine (DMT), lysergic acid diethylamide (LSD), psilocybin, and mescaline [6].

The clinical and subjective effects of the synthetic cathinones are similar to the effects of MDMA, cocaine, and methamphetamine, though not identical, and the mechanism of action of these drugs is somewhat different (Table 50.1). While commercial preparations may include any combination of active compounds, it is helpful to look at the more commonly isolated substances.

Relative effect of the synthetic cathinones on catecholamine receptors


Mephedrone and methylone both stimulate the release of dopamine from central nervous system dopaminergic nerve terminals and simultaneously prevent dopamine reuptake, producing effects similar to those of cocaine [7]. Mephedrone is relatively nonselective catecholamine releaser which produces hypertension via stimulation of peripheral alpha-adrenergic receptors and tachycardia through activation of beta-adrenergic receptors, similar to that of methamphetamine [8]. Though it is not known through exactly what mechanism mephedrone produces this cardiovascular response, given its structural similarity to methamphetamine, it is likely that this is caused by the release of norepinephrine from peripheral sympathetic nerves. Both mephedrone and methylone are transporter substrates and not blockers. Like cocaine, both of these agents appear to be nonselective for particular transporters. A decrease in serotonin reuptake in the central nervous system is the likely mechanism for these drugs’ reported antidepressant properties.
Methylenedioxypyrovalerone (MDPV) is the main compound isolated from patients admitted to hospital emergency departments with “bath salt” overdose in the United States [9] and likely is the primary active ingredient in current preparations [10]. It is a potent catecholamine-selective transporter blocker that is not a transporter substrate and inhibits dopamine reuptake with weaker effect on serotonin in the same way the structurally similar cathinone pyrovalerone does [11]. When compared to cocaine and amphetamine, MDPV was found to be 50 times more potent in blocking dopamine reuptake and 10 times more potent in blocking norepinephrine and displays a high selectivity for catecholamine reuptake blocking. Given these findings, it is likely that bath salt preparations containing MDPV have a high potential for abuse, and it is likely that clinicians will see an increasing number of patients admitted with symptoms related to cardiovascular stimulation as the use of these NPSs becomes more widespread.

The synthetic stimulants found in commercial bath salt preparations have been implicated in a number of acute and chronic untoward events. Presumably these drugs are sought out for their purported effects of intense stimulation, alertness, and euphoria. Some users have reported mild sexual stimulation and feelings of empathy similar to those reported by users of the entactogen ecstasy (MDMA). Adverse or unwanted effects reported by some users include distressing feelings of anxiety and agitation with some developing paranoid delusions and hallucinations. These hallucinations are typically of a violent nature with threatening intruders and a feeling of intense fearfulness and have resulted in high-profile violent episodes involving law enforcement. Insomnia, inability to concentrate, difficulty with memory, and headaches are common, and some users have developed tremors, muscle twitching, chest pain, and seizures. Encephalopathy due to hyponatremia has been reported [12], resulting from an excessive thirst, similar to what was reported with MDMA use in the early 1990s [13]. 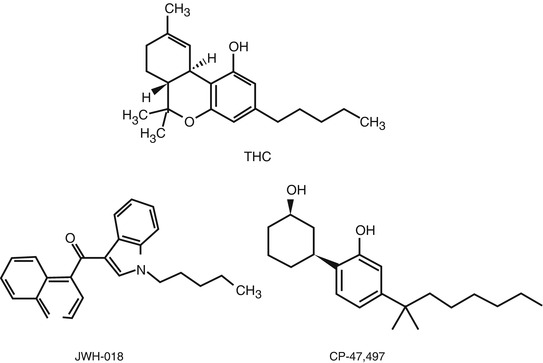 Chemical structure of the naturally occurring compound THC and synthetic cannabinoid receptor agonists from the JWH and CP class. Note that all three compounds have markedly different structures
Synthetic cannabinoids are smoked or eaten in the same manner as marijuana. They are rapidly absorbed through the lungs and produce a wide range of psychological and central nervous system (CNS) effects that peak in 15 min but unlike THC may persist for 12–24 h depending on the dose [15]. Users report feelings of euphoria, heightened sensory perception, and a distortion of space and time similar to marijuana [16]. In some patients these sensations are distressing, and some users have reported feelings of anxiety, dysphoria, as well as nausea and vomiting [17]. In patients with underlying psychiatric disorders, aggravation of psychotic states has been reported [18]. Generalized CNS depression leading to drowsiness and sleep typically follows the initial psychomotor agitation. When synthetic cannabinoids are ingested via the oral route, the bioavailability is variable but considerably lower due to issues with adsorption and first-pass metabolism by the liver. The onset of effects is slower and may persist longer [19].

There are two main classes of synthetic cannabinoid molecules, those related to the JWH compounds developed by John W. Huffman at Clemson University and those related to the CP compounds developed by Pfizer. Both classes are structurally different from THC but were designed to bind to the same CB1 and CB2 cannabinoid receptors. The CB1 receptor is expressed primarily in the hippocampus, basal ganglia, neocortex, amygdala, and cerebellum of the mammalian brain but is found throughout the body in lesser numbers. Though also expressed in the brain, the CB2 receptor is much less dense. Most research has focused on the CB1 receptor.
Only gold members can continue reading. Log In or Register to continue