For alveolar gas concentration, it is influenced by (1) uptake, (2) ventilation, and (3) the concentration effect. The relationship of F i and F A can be illustrated by the alveolar tension curve.

The inhalational agent is first taken up by the pulmonary circulation. The greater the uptake from the pulmonary circulation, the lesser the inhalational agent is able to reach to alveoli, which leads to slower rate of the rise of the alveolar concentration (F A/F i < 1.0). Since the alveolar partial pressure is proportional to alveolar gas concentration, the slower the rise of alveolar concentration, the longer it takes for the alveolar partial pressure to reach to clinical effect. As a result, the greater the uptake of the inhalational agent, the slower the rate of induction.
There are four factors that determine the amount of update: (1) blood/gas solubility, (2) alveolar blood flow, (3) the difference in partial pressure between alveolar gas and venous blood, and (4) the barometric pressure (see Eq. 3.1) where λ represents blood/gas solubility, Q represents cardiac output which is then related to alveolar blood flow, and (P a − P v) represents the difference in partial pressure between alveolar gas and venous blood:

(3.1)
The less soluble the inhalation agent is (such as nitrous oxide), the faster the rise of alveolar concentration, which leads to faster induction. The higher the alveolar blood flow is (such as in patients of higher cardiac output), the greater the uptake of the inhalational agent, which leads to slower induction. The greater the difference in the partial pressure between alveolar gas and venous blood is, the greater the uptake, which leads to slower induction. Finally, barometric pressure also plays a role in the amount of uptake, and uptake is greater in San Diego than in Denver, for example.
In terms of the amount of uptake by the tissue, it depends highly on the type of tissues and the temporal relationship is best illustrated by the alveolar tension curve. One can categorize tissues into vessel-rich, muscle, fat, and vessel-poor groups. The vessel-rich group (such as the brain, heart, liver, kidneys, and endocrine organs) is the first to reach equilibrium between arterial and tissue partial pressures, while the fat group takes days to reach equilibrium. The tail portion of the alveolar tension curve demonstrates such effect as the rate of rise slows as the muscle/fat group slowly reaches equilibrium. The alveolar tension curve also demonstrates the effect of blood/gas solubility on the rate of rise of F A/F i since desflurane (an agent of low blood/gas solubility) rises much quicker than halothane (an agent which is highly soluble).

One can speed up the onset of inhalational agent by increasing the minute ventilation as one constantly replaces anesthetic agent taken up by the pulmonary circulation with higher inspired gas concentration. Such effect is more pronounced with soluble agents such as isoflurane since its speed of onset is influenced by the uptake the most. 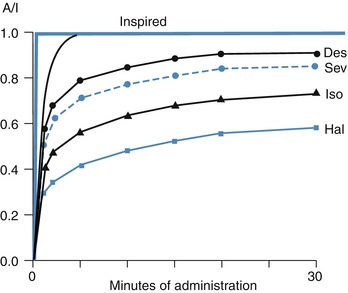 Alveolar tension curves of several anesthetics (Graphs are redrawn from the data of Yasuda et al. [16])
Finally, the second gas effect is the concentration effect of one gas upon another. The combination of nitrous oxide and another inhalational agent is a typical example of second gas effect although this is insignificant in clinical practice.

For arterial gas concentration, it is determined by ventilation/perfusion mismatch. Mismatch acts as a restriction to arterial and/or alveolar flow and therefore will slow the induction.

Several factors affect the elimination of inhalational agents. For example, for agents that undergo extensive metabolism (such as halothane), they tend to have a faster elimination. While the exact molecular pathway has not been identified with certainty, it appears that cytochrome P-450 (especially CYP 2E1 subgroup) plays a major rule in the metabolism of certain inhalational agents. However, the most important element of elimination is via the respiratory system. The same factors that speed up induction are the same factors that fasten elimination such as elimination of rebreathing, high fresh gas flow, low anesthetic-circuit volume, low blood/gas solubility, high cerebral blood flow, and high minute ventilation. Nevertheless, one should keep in mind that emergence from anesthesia is a more complicated topic than elimination of inhalational agents itself and that it also depends on other factors such as the duration of anesthetics. For instance, emergence is faster after short anesthetics than after long anesthetics. In addition, in patients with significant amount of fat or muscle group, these compartments serve as a reservoir of inhalational agents during emergence.
Diffusion hypoxia is a specific phenomenon for nitrous oxide. The elimination of nitrous oxide is extremely rapid, which leads to lower concentration of alveolar oxygenation and carbon dioxide. The lower oxygenation itself leads to hypoxia, while the lower carbon dioxide in the alveoli decreases respiratory drive and hinders ventilation. As a result, after discontinuing nitrous oxide, it is recommended to provide supplemental oxygen to avoid diffusion hypoxia. Clinically, one does not often observe diffusion hypoxia since it is a common practice to provide supplemental oxygen after discontinuation of anesthetics.

The sweet smell as well as its least pungent odor makes sevoflurane (2,2,2-trifluoro-1-[trifluoromethyl]ethyl fluoromethyl ether) an ideal agent for inhalation induction. This is particular true in the pediatric population where mask induction is often required. Furthermore, sevoflurane itself can produce adequate muscle relaxation for intubation following inhalation induction.
Similar to other inhalational agents, sevoflurane depresses myocardial contractility, depresses respiration, reverses bronchospasm, and causes slight increases in cerebral blood flow and intracranial pressure [1–3].
However, there are specific properties related to sevoflurane. For example, the liver microsomal enzyme p-450 (especially the 2E1 isoform) metabolizes sevoflurane 10–25 times the rate that of isoflurane or desflurane, which leads to an increase in inorganic fluoride (F−). Inorganic fluoride has the potential to cause nephrotoxicity, but no clinically significant renal dysfunction has been associated with sevoflurane thus far. Another factor in sevoflurane metabolism is the production of compound A (fluoromethyl-2,2-difluoro-1-[trifluoromethyl]vinyl-ether) via the degradation of sevoflurane through alkali such as barium hydroxide lime or soda lime, which is another proven (at least in rats) nephrotoxin. Risks of accumulation of compound A include high respiratory gas temperature, low-flow anesthesia, dry barium hydroxide absorbent (Baralyme), high sevoflurane concentration, and long anesthetic duration. Even though most studies have not demonstrated any clinical significant association between postoperative renal dysfunction and sevoflurane usage, some clinicians advocate the fresh gas flow to be at least 2 L/min for anesthetics lasting more than a few hours and that sevoflurane should not be used in patients with preexisting renal impairment.

Desflurane (1,2,2,2-tetrafluoroethyl difluoromethyl ether) requires a special vaporizer given that its vapor pressure at 20 °C reaches 681 mmHg, which boils at room temperature at high altitudes. Desflurane possesses the lowest blood/gas coefficient of all modern inhalational agents, has minimal metabolism, and allows for wake-up times of approximately 50 % less than those compared to isoflurane and 50 % quicker wake-up time when compared to sevoflurane in cases greater than 3 hours. However, switching from isoflurane to desflurane toward the end of anesthesia does not significantly fasten recovery or discharge [4, 5]. Compared with sevoflurane, desflurane is associated with similar incidence of emergence delirium in the pediatric population [6, 7].
Only gold members can continue reading. Log In or Register to continue