Hypertensive disorders are one of the most common causes of presentation for emergency care in the postpartum period, ranking second to infections (Clapp, Little, Zheng, & Robinson, 2016). Although many women experience hypertensive disorders during pregnancy, either due to chronic disease or to the spectrum of gestational hypertension and preeclampsia, de novo development of hypertension is seen in 42% to 77% of women with postpartum hypertension (Al-Safi et al., 2011; Goel, 2015). Eclampsia is one of the most concerning complications of hypertensive disorders of pregnancy and contributes significantly to maternal mortality. In Canada, a case fatality rate of 3.4 per 1,000 deliveries was noted from 2003 to 2009, making the risk of death from eclampsia 26.8 times greater than those who do not experience eclampsia (Liu et al., 2011). In addition, eclampsia is associated with increased risk of morbidity including the need for assisted ventilation, adult respiratory distress syndrome, acute renal failure, and cardiac arrest (Liu et al., 2011).

Traditionally, the postpartum period has been considered to extend into the fourth postpartum week (Yancey, Withers, Bakes, & Abbot, 2011). After discharge, many women are not seen in follow-up until 6 weeks and may not present earlier unless they experience symptoms. Women with the antenatal diagnosis of pregnancy-induced hypertensive disorders do not normalize blood pressure immediately following delivery. In one study of 62 patients, 81% had normalized by 3 months postpartum and required a mean of 5.4 weeks to reach normal blood pressures (Podymow & August, 2010). However, there may be a brief 48-hour window following delivery of normal blood pressures followed by an increase in blood pressure between postpartum days 3 to 6, likely due to physiologic volume expansion and fluid mobilization (American Congress of Obstetricians and Gynecologists [ACOG], 2013; Ghuman, Rheiner, Tendler, & White, 2009; Podymow & August, 2010). As most women are discharged home prior to the fifth postpartum day in which blood pressure has been shown to reach peak values, the need for possible postpartum blood pressure treatment may not be identified (Podymow & August, 2010). Given this, blood pressure evaluation at 72 hours postpartum, and then again 7 to 10 days postpartum, is recommended for women with known hypertensive disorders of pregnancy (ACOG, 2013).

Rates of eclampsia have been declining. In Canada, the rate of eclampsia was noted to fall from 12.4 per 10,000 deliveries in 2003 to 5.9 in 2009 (Liu et al., 2011). While there has been reduction in the incidence of antenatal eclampsia due to improved prenatal care, screening, and prophylactic treatment with magnesium sulfate, in the past 60 years there has been no decrease in the incidence of postpartum eclampsia, with 14% to 26% of eclamptic seizures noted to occur greater than 48 hours after delivery (Chames et al., 2002; Liu et al., 2011; Yancey et al., 2011).

It is critical to quickly evaluate and treat those who present with elevated blood pressure, especially if associated with prodromal symptoms such as headache. Headache was the most common presenting symptom in women with delayed postpartum preeclampsia in Al-Safi’s series, present in 69.1% (Al-Safi et al., 2011). In Chames’s series, 91% of women with postpartum eclampsia were noted to have prodromal symptoms. Only seven sought care prior to the onset of seizure activity, but six of these women were deemed to have had a preventable seizure due to failure to consider a diagnosis of preeclampsia in the postpartum setting (Chames et al., 2002). Since the differential diagnosis of postpartum hypertension is broad, a careful history and physical examination must elucidate the etiology and appropriate management.

It is essential to note that while headache is the most common presenting symptom, and headache with associated elevated blood pressure prompts evaluation for preeclampsia, headache itself is nonspecific and is associated with a broad differential. Hypertensive disorders of pregnancy represent 24% of postpartum headaches, second most common behind tension-type headaches (Stella, Jodicke, How, Harkness, & Sibai, 2007).

Given the broad differential associated with postpartum hypertension, a thorough history is critical. In addition to talking with the patient, prenatal and hospital admission records are obtained and reviewed to obtain the following: determination of the interval between delivery and clinical presentation, a thorough medical and pregnancy history, determination of associated symptoms, family history with particular attention to cerebrovascular accidents, and confirmation of medication usage.

Other associated symptoms may be clues that an alternative diagnosis or diagnoses must be considered. Hyperthyroidism, either Graves’ disease or the hyperthyroid phase of postpartum thyroiditis, may present with palpitations and heat intolerance. Shortness of breath and chest pain are associated with peripartum cardiomyopathy, of which 23% to 46% of cases have associated hypertension (Sibai, 2011). Symptoms of other cerebrovascular complications often overlap with those of preeclampsia and include refractory or thunderclap headache (a sudden onset pain often described as the worst headache a woman has ever experienced), visual disturbances, or neurologic deficits (Stella et al., 2007). Pheochromocytoma, although a rare entity, is associated with high morbidity and symptoms such as palpitations, excessive sweating, chest pain, and dizziness (Sibai, 2011).

Medication usage is an essential part of the history. The use of nonsteroidal anti-inflammatory medications like ibuprofen is common practice. These medications have been shown to lead to hypertension by reducing compensatory renal prostaglandin synthesis in hypertensive patients while concomitantly increasing renal synthesis of vasoconstricting agents (Makris, Thronton, & Hennessy, 2004). They may also inhibit salt and water loss postpartum as well as decrease the effectiveness of many antihypertensive drugs including beta blockers, angiotensin-converting enzyme inhibitors, and thiazide diuretics (Ghuman et al., 2009). Anticongestants such as ephedrine and phenylpropanolamine are other commonly used medications associated with exacerbation of hypertension. Ergot alkaloids like methylergonovine, administered for uterine atony in the postpartum period, cause vasoconstriction by acting on alpha adrenergic receptors and therefore can contribute to the hypertensive issues (Sibai, 2011).

Potential life-threatening complications of postpartum hypertension include cerebral infarction or hemorrhage, congestive heart failure, pulmonary edema, or renal failure (Sibai, 2011). Signs of these processes may be detected while performing a thorough physical examination. Vital signs alone may provide clues as to the etiology of the hypertension. Acute onset, severe hypertension (defined as systolic pressure greater than or equal to 160 mmHg or diastolic pressure greater than or equal to 110 mmHg) that persists greater than 15 minutes is a hypertensive emergency. The degree of systolic hypertension appears to be the most significant predictor of cerebral injury and infarction. In a series of 28 patients with preeclampsia and stroke, all but one had severely elevated 337systolic pressures just prior to experiencing hemorrhagic stroke, while only 13% had severely elevated diastolic pressures (ACOG, 2015). Widened pulse pressure and tachycardia may be seen with hyperthyroidism, postural hypotension with pheochromocytoma, and decreased oxygen saturation with congestive heart failure or pulmonary edema (Sibai, 2011).

A thorough neurologic examination including evaluation of cranial nerves, visual fields, motor strength, sensation, cerebellar function, reflexes, and presence of clonus must be performed. Brisk reflexes, especially if associated with clonus, are classically associated with a preeclamptic state. Forty-seven percent of women presenting with postpartum hypertension or eclampsia were noted to have hyperreflexia (Yancey et al., 2011). It is critical to urgently evaluate any neurologic deficits as they are indicative of possible serious intracranial abnormalities.

Cardiovascular and respiratory examination may reveal possible fluid overload, which is associated with pulmonary edema; this is not an uncommon complication of both preeclampsia and peripartum cardiomyopathy. Abdominal examination may reveal right-upper-quadrant tenderness. In Yancey’s study of women presenting with postpartum preeclampsia or eclampsia, 18% were noted to have this finding (Yancey et al., 2011). Although it is a very common finding seen in as high as 84% of women presenting with postpartum hypertension, edema (generalized or peripheral) is a nonspecific finding (Yancey et al., 2011). The presence may be noted but may not help elucidate etiology.

Hemolysis, elevated liver enzymes, and low platelet (HELLP) syndrome, another serious complication of preeclampsia, has also been noted to initially present in 30% of women who develop this syndrome from postpartum days 1 through 7 (Sibai, 2011). In Yancey’s study of 22 women with postpartum hypertension or eclampsia, 41% had elevated liver enzymes, 24% had anemia, but none were noted to have thrombocytopenia (Yancey et al., 2011).

As with physical examination findings, other laboratory findings may help to identify alternative etiologies of hypertension. For example, serum potassium levels less than 3 mEq/L with associated metabolic acidosis are indicative of hyperaldosteronism. Confirmation of adrenal tumor may then be made with either computerized tomography (CT) or magnetic resonance imaging (MRI) of the abdomen (Sibai, 2011). Low serum creatinine is suggestive of volume overload (Sibai, 2011).

Presenting symptoms and physical examination findings concerning for pheochromocytoma include: paroxysmal hypertension associated with headache, profuse sweating, palpitation, tachycardia, pallor, and possible fever. Measurement of 24-hour urine epinephrine, norepinephrine, and metabolites (metanephrine and normetanephrine) can lead to the diagnosis, which is then confirmed with either CT or MRI of the abdomen (Sibai, 2011). Symptoms and physical examination findings that point to pulmonary edema necessitate further evaluation with chest x-ray and possible echocardiography (Sibai, 2011).

338In the antepartum evaluation of hypertensive disorders of pregnancy, neurodiagnostic imaging is rarely indicated. However, in the postpartum period, the differential diagnosis is wider, especially as distinguishing laboratory findings, such as proteinuria, are not always present. In addition, treatment modalities may be dictated by diagnosis made by imaging. Different studies have examined the utility of neurodiagnostic imaging. In Yancey’s series of 22 women with postpartum hypertension or eclampsia, 40.9% underwent head CT, and of these, three had significant findings including diffuse edema, cerebellar hypodensities, and small white matter hypodensities (Yancey et al., 2011). In the evaluation of postpartum headache, Stella found normal imaging in only 32% by employing indications including focal neurologic deficits, new-onset seizures, recurrent seizures despite prophylactic magnesium sulfate, persistent visual changes, or persistent refractory headache (Stella et al., 2007). These abnormal findings included pituitary hemorrhage, posterior reversible encephalopathy syndrome (PRES), cerebral venous thrombosis, inflammatory changes, thalamic lesions, and subarachnoid hemorrhage (Stella et al., 2007). Ultimately, neurodiagnostic imaging studies aimed at evaluating the cerebral vasculature—MRI and arterial and venous angiography—will need to be obtained if these findings are present.

Reversible cerebral vasoconstrictive syndrome is a similar condition, classically presenting with a thunderclap headache, which is more severe and 339sudden than that associated with PRES. Although the pathophysiology is unclear, it is likely due to a disturbance in the control of cerebral vascular tone (Bushnell & Chireau, 2011). Other possible intracranial etiologies and associated radiographic findings are displayed in Table 28.2. 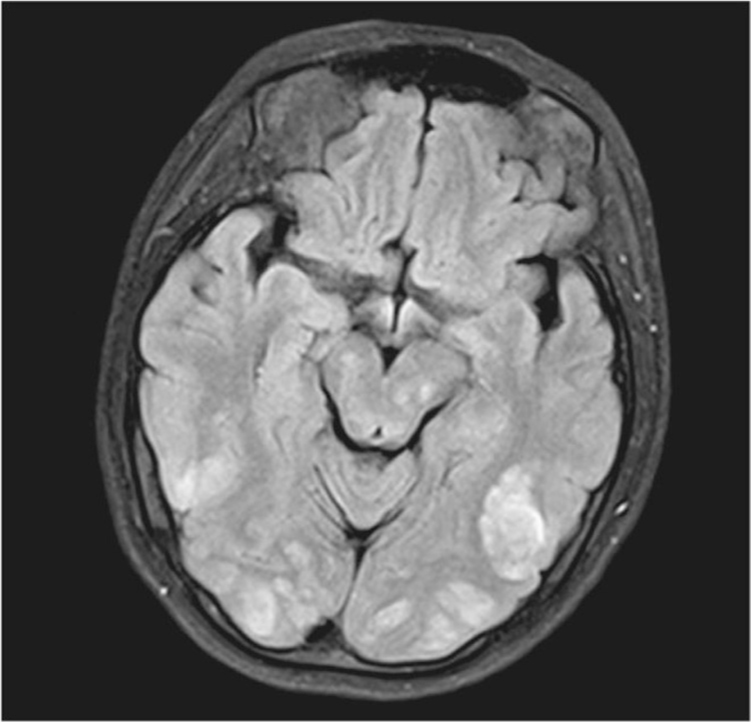