Vaginal bleeding in the first trimester of pregnancy is a common complaint among women who present to an emergency room. Approximately 25% of clinically relevant pregnancies have vaginal bleeding in the first trimester and half of these will eventually miscarry (Paspulati, Bhatt, & Nour, 2004). Vaginal bleeding may be caused by implantation of the embryo, subchorionic hematoma, miscarriage, gestational trophoblastic disease, or ectopic pregnancy. It is crucial for the clinician to initially assess for the most dangerous causes, especially ectopic pregnancy. Ectopic pregnancy, the implantation of the embryo outside the uterine cavity, is a potentially life-threatening complication, with an incidence of approximately 1.5% to 2% of all pregnancies. The morbidity and mortality from ruptured ectopic pregnancies have decreased due to early detection and effective management strategies. However, 6% of maternal deaths are still caused from ruptured ectopic pregnancies, often due to failure to recognize the early signs and symptoms (Barnhart, 2009).

The amount of vaginal bleeding can range from spotting to severe hemorrhage; however, the amount of bleeding is not necessarily indicative of the cause of bleeding. The pace of a woman’s evaluation will depend on the presenting history and symptomatology. It is critical to initially quantify the amount of blood loss because if there has been heavy bleeding, anemia and even hemodynamic instability may ensue.

Along with the bleeding, the woman may have noticed the passing of tissue, or even a fetus, which, if available, can be examined for chorionic villi or fetal parts. Temporal associations are also relevant. For example, if the bleeding only occurs when passing urine, it could be that the bleeding is from a urinary tract infection.

Many women presenting with vaginal bleeding may be unaware that they are pregnant. Every sexually active, reproductive-age woman who presents with irregular vaginal bleeding or abdominal pain needs a pregnancy test.

If known, the woman’s last menstrual period (LMP) can be used to estimate gestational age. If the woman has irregular menses or an unsure LMP, basing gestational age on LMP may be inaccurate. A previous ultrasound in this pregnancy that documents an intrauterine pregnancy, in conjunction with the LMP, is the most accurate assessment of gestational age. A previous ultrasound documenting an intrauterine pregnancy almost 100% negates concern for ectopic pregnancy. The risk of heterotopic pregnancy, a concurrent pregnancy in the uterus and ectopic pregnancy, is extremely low in patients that have not used assisted reproductive techniques, estimated at approximately 1/4,000 (Deutchman, Tubay, & Turok, 2009).

If the location of the pregnancy is unknown, it is important to assess for risk factors for an ectopic, including previous ectopic pregnancy, tubal surgery, current intrauterine device, infertility treatments, history of pelvic inflammatory disease, age over 35 years, and smoking (Barnhart, 2009; Deutchman et al., 2009). Although conception after tubal ligation or with an intrauterine device in place is rare, if pregnancy does occur, there is an extremely high rate (25%–50%) of ectopic pregnancy (Barnhart, 2009).

Ectopic pregnancies most commonly implant in the fallopian tubes, accounting for over 95% of all ectopic pregnancies (Bouyer, Coste, Fernandez, Pouly, & Job-Spira, 2002). However, those ectopic pregnancies that implant in the cervix, uterine cornua, cesarean section scar, ovaries, or abdominal cavity are more difficult to diagnose and manage, leading to higher morbidity. Timely diagnosis of an ectopic pregnancy arising in one of the more rare locations requires a high level of suspicion, radiologic expertise, and at times magnetic resonance imaging (MRI) in addition to ultrasound.

In addition to the history, vital signs and clinical appearance are crucial to determine the pace and breadth of the clinical workup. It is crucial to remember that a woman may lose between 15% and 25% of her blood volume before developing hypotension and tachycardia (Roberts, 2003). Acute blood loss leading to hemorrhagic shock can develop from a ruptured ectopic pregnancy or hemorrhage from a spontaneous abortion.

The physical examination initially includes a careful abdominal examination in order to palpate for uterine enlargement, tenderness, abdominal distension, and peritoneal signs. A pelvic examination is then performed in all women complaining of vaginal bleeding. A visual inspection of external genitalia can identify nonobstetric causes of bleeding, such as hemorrhoids or trauma. A speculum examination is helpful in assessing the amount of blood in the vagina as well as evidence of active bleeding. The cervix is visualized to elicit other nonobstetric causes of bleeding, such as sexually transmitted infections, polyps, or other cervical masses. Significant cervical dilation or visible products of conception are indicative of an inevitable abortion. Often removing these products of conception from the cervical os provides immediate relief of a woman’s pain and can limit the amount of bleeding. Uterine size and position should be evaluated by bimanual examination. 47The adnexae are palpated for masses and tenderness, which may indicate an ectopic pregnancy or other etiology, such as an ovarian cyst.

The first measurable finding of a pregnancy is an elevated human chorionic gonadotropin (hCG) test. HCG is detectable in the plasma of pregnant women 8 days after ovulation, at the time of implantation of the blastocyst. Home pregnancy tests can detect hCG as low as 25 mIU/mL (Deutchman et al., 2009). Therefore, it is currently possible to detect a pregnancy even before a woman misses a menses.

A single hCG value does not identify the location or viability of a pregnancy but can serve as an estimate for gestational age. The discriminatory zone is most commonly defined as the hCG above which one expects to see a gestational sac (GS) on transvaginal ultrasound (TVUS). Failure to see a GS above this level suggests either an ectopic pregnancy or an abnormal intrauterine pregnancy. The discriminatory zone has been reported between 1,500 and 3,000 mIU (Barnhart, 2009), but is not absolute and may vary, depending on the testing results of an individual institution. If a smaller number is used (e.g., 1,500 mIU), the sensitivity for diagnosing an ectopic pregnancy increases, but the risk of mistaking a normal pregnancy as abnormal and interrupting the pregnancy also increases. If a higher number is used (e.g., 3,000 mIU), the diagnosis of an ectopic pregnancy may be delayed. A small collection of fluid in the uterus, or pseudosac, may appear as an anechoic structure similar to the GS. Due to this possible confusion, a GS is suggestive of an intrauterine pregnancy, but the presence of a yolk sac (YS) is necessary to definitively diagnose and confirm an intrauterine pregnancy.

TVUS is critical in the evaluation of women with early gestational bleeding in order to determine the viability and location of the pregnancy. If a pregnancy is not visualized, then the ultrasound findings need to be correlated to hCG measurement. The determination of viability and location of a pregnancy is not always possible in one emergency room or obstetric triage visit. TVUS is preferred to transabdominal in the first trimester because it can more clearly identify fetal structures at an earlier gestational age.

There are various presentations and ultrasound findings of spontaneous abortions, depending on the gestational age of the pregnancy. One must be familiar with normal pregnancy development in order to recognize a failing pregnancy. A GS is first seen around 5 weeks; the traditional “double sac sign” was described using transabdominal ultrasound, but this is a subjective measure with poor interobserver agreement (Doubilet & Benson, 2013). A YS (Figure 5.1) then appears around 5.5 weeks with the embryo first being present around 6 weeks. The preferred method to assess cardiac activity in early pregnancy is M mode, which has significantly lower energy output than Doppler (Abramowicz, Kossoff, Marsal, & ter Haar, 2003; Figure 5.2). 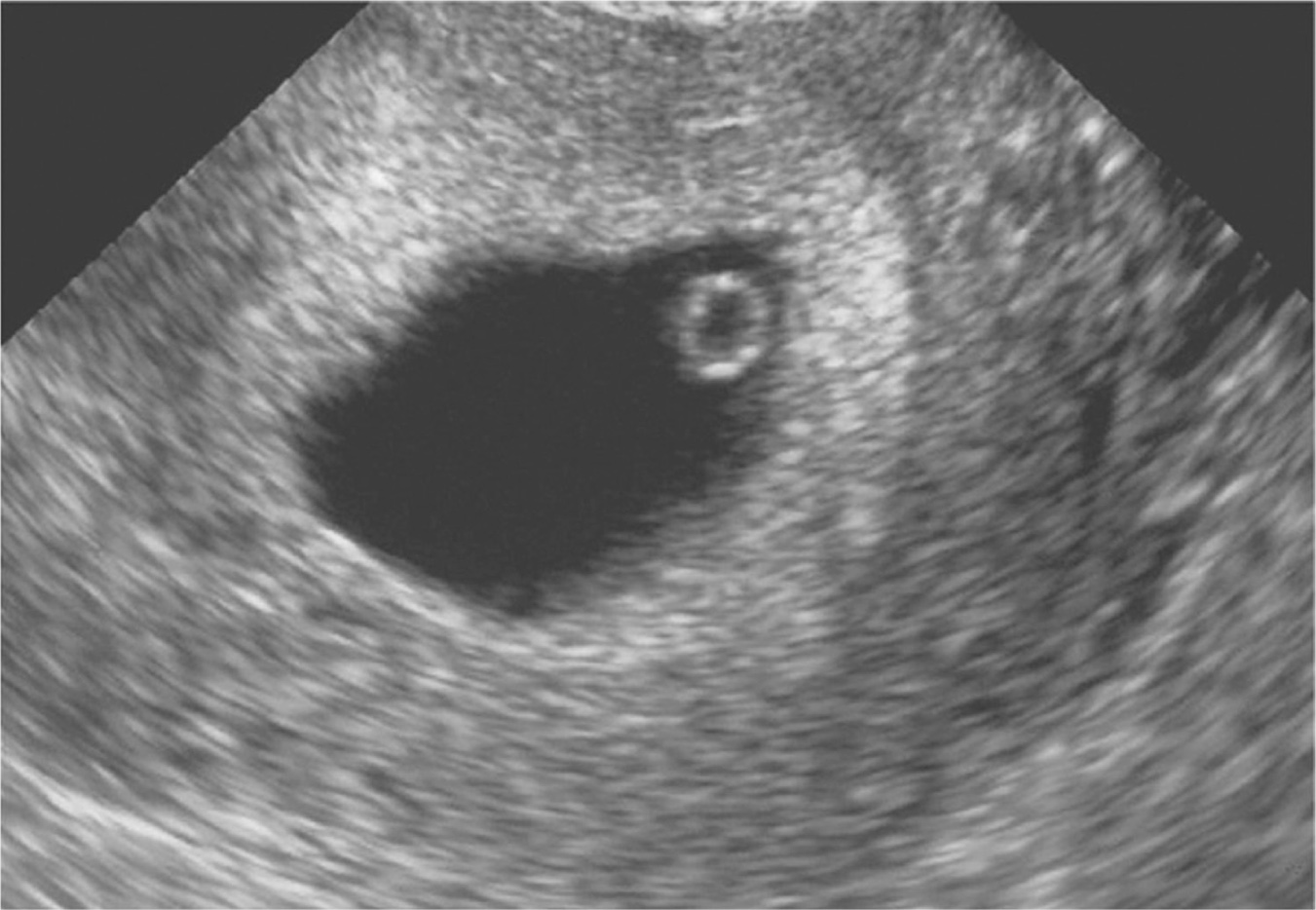 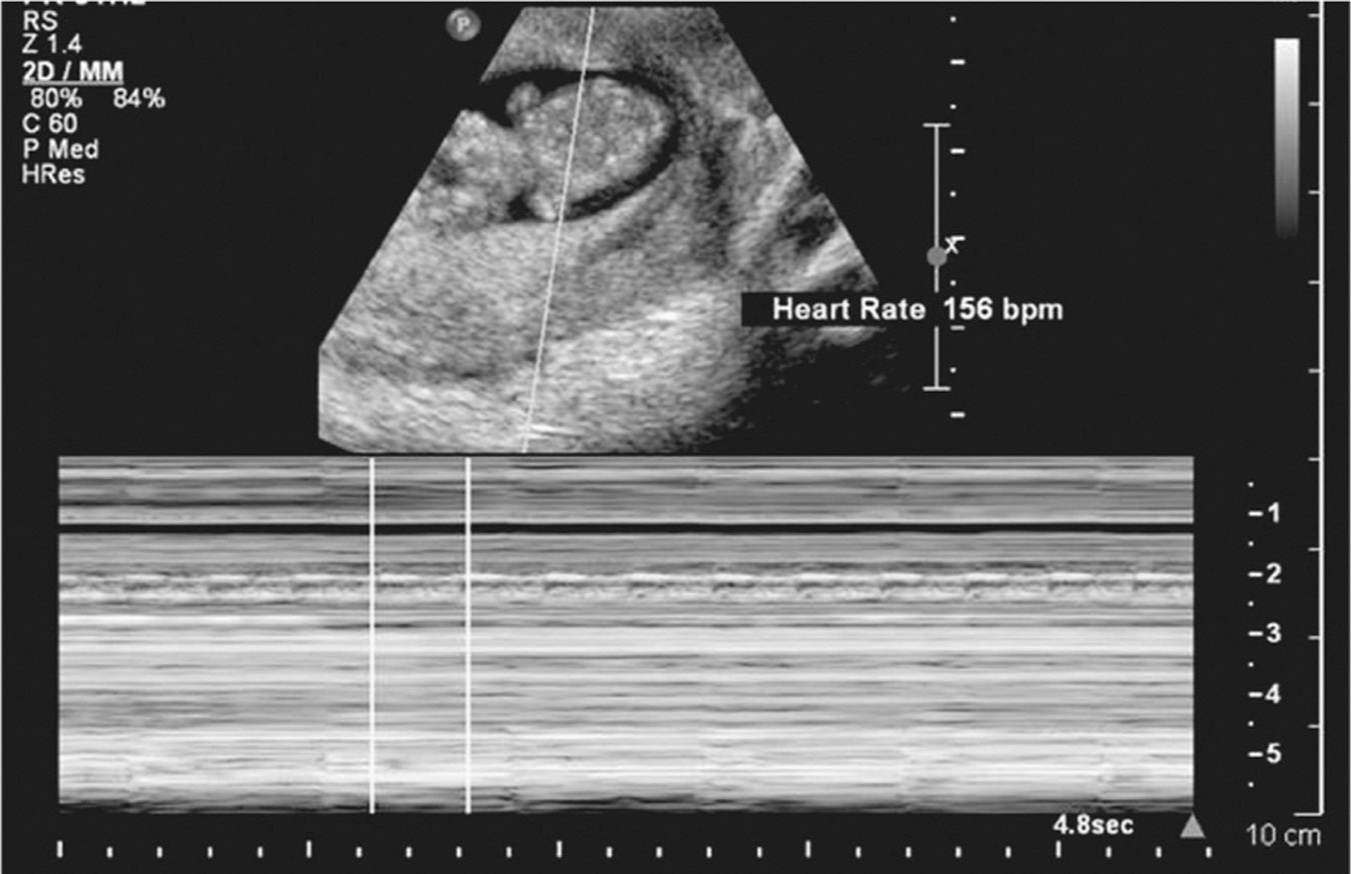