1. What Causes a Postdural Headache?

2. How Often Does a Postdural Headache Occur and Who Gets It?

Postdural puncture headache (PDPH) continues to be one of the most common complications of neuraxial anesthesia used in obstetrics. It is critical that the obstetric anesthesiologist be able to recognize the difference between PDPH, the incidence of which may approach 40%, and other causes of postpartum headache.1 PDPH is also the third most common cause of litigation stemming from neuraxial anesthesia.2 In fact, claims related to maternal death and newborn death/brain damage have steadily decreased since 1990, but PDPH settlements have seen a steady increase.3 Retrospective analysis indicates that the most frequently cited reason for a patient’s deciding to pursue legal action was a lack of full disclosure regarding potential for PDPH and/or lack of follow-up by the anesthesiologist.2 Although the headache itself is the usual official complaint, it seems that poor communication and an absence of empathy is what actually drives the majority of these legal actions. Accordingly, patients should be counseled about the risks of PDPH prior to every neuraxial anesthetic. If a Tuohy needle accidentally punctures the dura, it is imperative that, after the patient is comfortable, the potential risk of headache be once again explained. At that time, the patient should be advised of specific treatment options and reassured that adequate follow-up will be available.

WHAT CAUSES A POSTDURAL HEADACHE?

The symptoms of PDPH are thought to be due to leakage of cerebrospinal fluid (CSF) through a dural defect produced by the dural puncture. If the rate of CSF leakage exceeds the rate of production of CSF (approximately 550-700 mL/d, with 120-150 mL present in the subarachnoid space at any given time), then on assuming an upright position, the downward traction on the pain-sensitive intracranial veins, meninges, and cranial nerves results in headache. Other contributing factors to patient discomfort may be related to a compensatory vasodilation to account for loss of intracranial CSF volume as the body attempts to achieve homeostasis by maintaining a constant intracranial volume.4

HOW OFTEN DOES A POSTDURAL HEADACHE OCCUR AND WHO GETS IT?

It is important to remember that PDPH may arise either from an intentional dural puncture for a spinal anesthetic or an unintended dural puncture from the placement of an epidural needle. The overall incidence of unintentional dural puncture during attempted epidural placement lies somewhere in the range of 0.5% to 2.0%, depending on the experience of the clinician and characteristics of the patient.5 Whether the patient actually develops a headache is dependent on a number of variables. The landmark study by Vandam et al. identified three independent risk factors for developing a headache after unintended dural puncture in the general population. Female, younger, and pregnant patients were more likely than male, older, and nonpregnant patients to develop headache after dural puncture with identical needles.6

The needle gauge is the other major determinant for developing a headache. As one might expect, the larger bore the needle, the more CSF leakage, which, in turn, leads to a more significant headache. See Table 15-1 and Figure 15-1 for more information.7

Table 15-1. Effect of Gauge and Type of Needle on Incidence of PDPHa 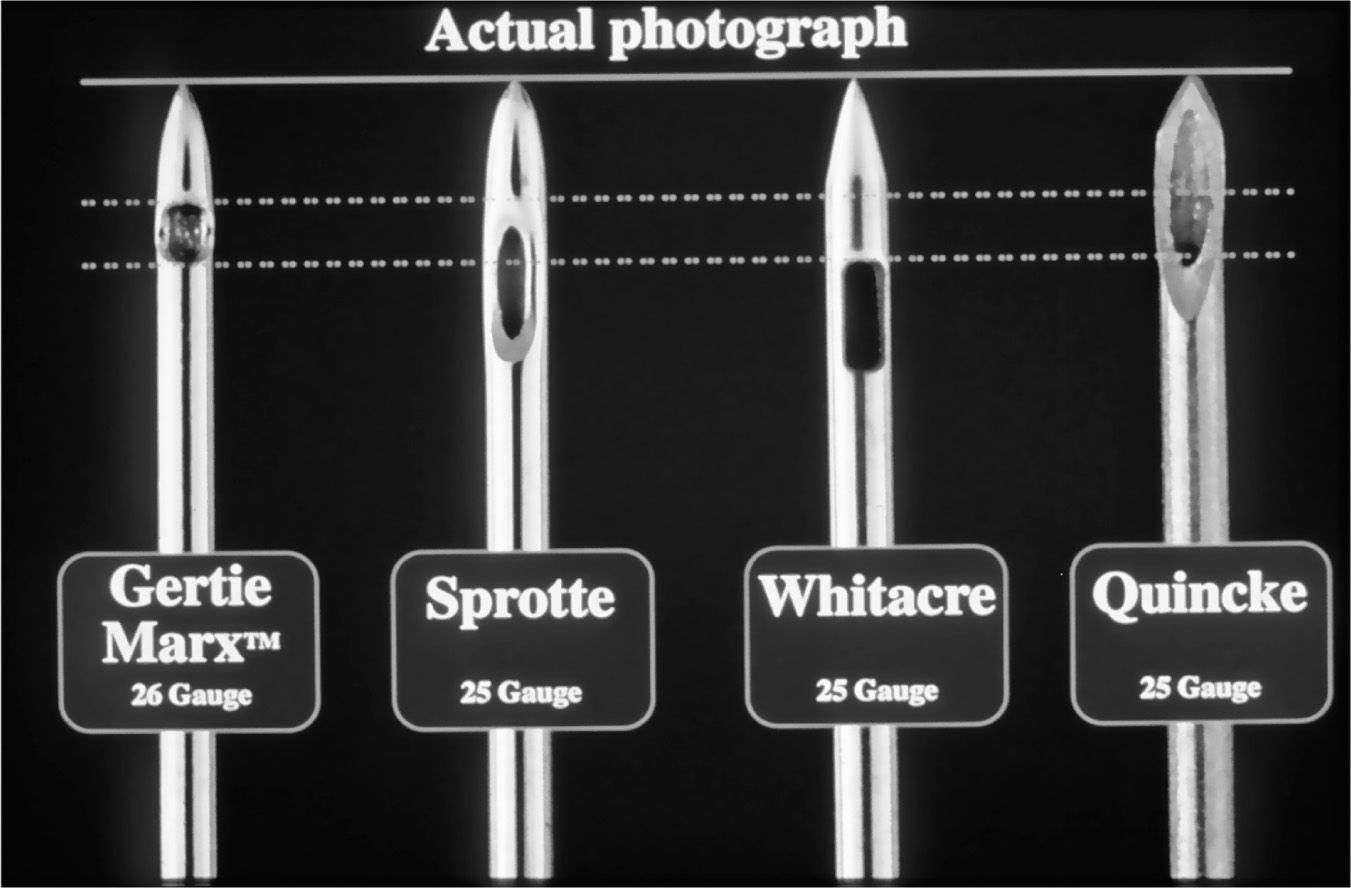 Figure 15-1. From Left to Right: Three examples of pencil-point needles (Gertie Marx, Sprotte, and Whitacre) and a cutting needle (Quincke).

The other characteristic of the needle that can affect headache rate is whether it is a cutting or a pencil point needle. The lower incidence of headache after a dural puncture with a pencil point needle is the result of “spreading” the dural fibers, rather than cutting them as with a conventional Quincke-type needle. This theoretically allows the dura to heal faster than with a similar-bore cutting needle. See Figure 15-2. 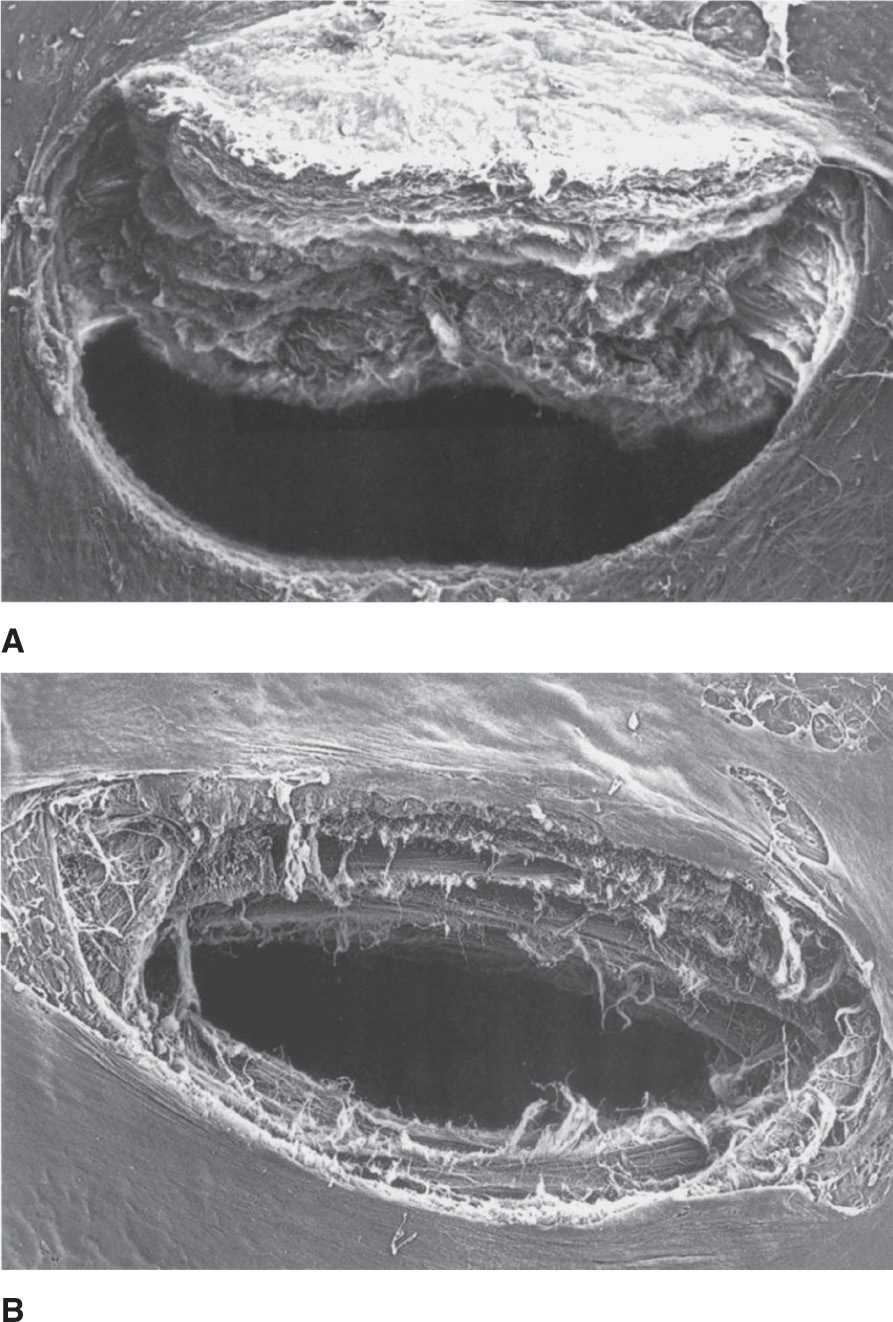 For many years, conventional wisdom suggested that morbid obesity was protective against PDPH. Initially, this hypothesis was based on the fact that fewer obese women received epidural blood patches. This, however, could be interpreted in one of two ways. One, it could be that fewer obese patients were having severe headache symptoms or, two, conversely, that providers were more hesitant about performing a blood patch on obese women who had already been “wet-tapped.” Further confounding the evidence is the fact that morbidly obese women have a higher cesarean delivery rate than nonobese women and as a result are given neuraxial morphine for postoperative pain relief, which in and of itself may alter the natural progression of the headache. More recent literature seems to support the notion that PDPH is rarer in the obese population but likely related to increased intra-abdominal pressure that is transmitted to the epidural space, thereby reducing CSF leakage and baseline CSF volume as compared to women with normal body habitus.8

The natural history of PDPH is self-limiting. Between 70% and 80% of cases of PDPH generally resolve within 7 days or less, and between 88% and 95% of the headaches resolve within 6 weeks. In a small minority of cases, the symptoms may persist for weeks or even months.6

Symptoms of PDPH typically include a positional headache in the frontal or occipital regions. Other presentations may include diplopia, tinnitus and/or changes in hearing, dizziness, and nuchal myalgia. Most of these symptoms can be explained by loss of CSF volume or compensatory measures to account for its loss. For example, as a result of CSF loss, diplopia is a direct result of traction on the sixth cranial nerve, and hearing loss is thought to be secondary to alterations of hair cell position in the inner ear.

Beyond difficulties in performing activities of daily living, PDPH can be a precursor to serious medical problems. Subdural hematoma may occur due to traction and pulling on the bridging subdural veins caused by intracranial hypotension as a result of CSF leakage. The actual incidence of subdural hematoma following dural puncture is unknown, but if it occurs, it has been successfully treated with either surgical decompression or epidural blood patch. Because subdural hematoma is more likely to be diagnosed following neurologic changes, or worsening of the headache, many practitioners are more likely to provide aggressive management (ie, an epidural blood patch), in the presence of more severe symptoms.9

The hearing loss and diplopia that can be part of the initial presentation of PDPH can rarely outlast the headache itself. They occasionally persist for months with case reports of changes in hearing persisting indefinitely.10

The options for treating PDPH can be divided into two categories: conservative and aggressive.

Conservative management involves maintaining a supine position, hydration, caffeine, nonsteroidal anti-inflammatory drugs, and the butalbital-acetaminophen-caffeine combination (Fioricet). Lying flat simply alleviates severity of symptoms but does not decrease the incidence of headache. It is important to remember that the theory behind hydrating patients is that patients with relative hypovolemia will produce less CSF. However, once a patient is euvolemic, additional hydration only exacerbates the symptoms of the headache by forcing patients to frequently walk to the bathroom. If a patient is taking oral fluids ab libitum, additional intravenous supplementation is not indicated. Other conservative strategies for ameliorating PDPH focus on countering the vasodilation that occurs as the body attempts to preserve brain homeostasis in the face of decreased intracranial volume due to CSF leakage. Caffeine is a cerebral vasoconstrictor, but normal oral intake does not appear to reduce long-term severity of headache or obviate the need for an epidural blood patch, although there may be some transient benefit.11 However, as a central nervous stimulant, there have been reports of seizures after high doses of intravenous administration of caffeine, particularly if blood is withdrawn for injection in a blood patch.

Other cerebral vasoconstrictors that have been used with varying success include theophylline and sumatriptan. According to meta-analysis, theophylline demonstrated a lower “mean sum of pain” when visual analog scores (VAS) were tabulated, but sumatriptan was not found to differ from placebo scores. Gabapentin, however, resulted in lower VAS at 1, 2, 3, and 4 days of administration. The reason is unclear but may be related to its structural similarity to gamma-aminobutyric acid, or its action at calcium channels. The Cochrane review was careful to caution that its meta-analysis was based on few trials that were, for the most part, poorly powered.12

Fioricet is often used as a first-line therapeutic agent. As previously stated, it consists of acetaminophen for pain relief as well as butalbital and caffeine for their vasoconstrictor effect.

More invasive measures postpuncture may include converting the anesthetic to a continuous spinal, which may reduce the incidence of headache. If a headache does occur, an epidural blood patch (EBP) may be performed.