Prior to the routine availability of gas exchange monitors, anesthesiologists used a precordial or esophageal stethoscope to ensure that the lungs were being ventilated in the event that the circuit became disconnected. Likewise, the heart tones could be auscultated to confirm a beating heart. Although less essential today because other modalities are available, the finger on the pulse and auscultation remain front-line monitors, especially when technology fails. Chest auscultation remains the primary method to confirm bilateral lung ventilation in the operating room, even if end tidal CO2 detection is the primary mechanism to exclude esophageal intubation.

Instrumentation of the esophagus should be avoided in patients with esophageal varices or strictures.

A precordial stethoscope (Wenger chestpiece) is a heavy, bell-shaped piece of metal placed over the chest or suprasternal notch. Although its weight tends to maintain its position, double-sided adhesive disks provide an acoustic seal to the patient’s skin. Various chestpieces are available, but the child size works well for most patients. The bell is connected to the anesthesiologist by extension tubing.

The esophageal stethoscope is a soft plastic catheter (8-24F) with balloon-covered distal openings (Figure 6-1). Although the quality of breath and heart sounds is much better than with a precordial stethoscope, its use is limited to intubated patients. Temperature probes, electrocardiogram (ECG) leads, ultrasound probes, and even atrial pacemaker electrodes have been incorporated into esophageal stethoscopes. Placement through the mouth or nose can occasionally cause mucosal irritation and bleeding. Rarely, the stethoscope slides into the trachea instead of the esophagus, resulting in a gas leak around the tracheal tube cuff. 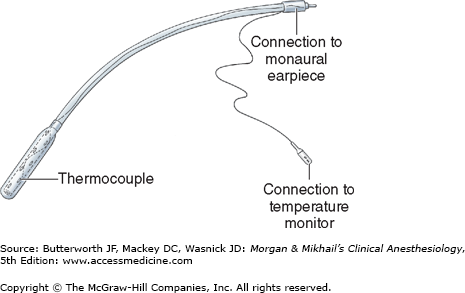 The confirmation of bilateral breath sounds after tracheal intubation, however, is made with a binaural stethoscope.

Pulse oximeters are mandatory monitors for any anesthetic, including cases of moderate sedation. There are no contraindications.

Pulse oximeters combine the principles of oximetry and plethysmography to noninvasively measure oxygen saturation in arterial blood. A sensor containing light sources (two or three light-emitting diodes) and a light detector (a photodiode) is placed across a finger, toe, earlobe, or any other perfused tissue that can be transilluminated. When the light source and detector are opposite one another across the perfused tissue, transmittance oximetry is used. When the light source and detector are placed on the same side of the patient (eg, the forehead), the backscatter (reflectance) of light is recorded by the detector.

Oximetry depends on the observation that oxygenated and reduced hemoglobin differ in their absorption of red and infrared light (Lambert-Beer law). Specifically, oxyhemoglobin (HbO2) absorbs more infrared light (940 nm), whereas deoxyhemoglobin absorbs more red light (660 nm) and thus appears blue, or cyanotic, to the naked eye. The change in light absorption during arterial pulsations is the basis of oximetric determinations (Figure 6-2). The ratio of the absorptions at the red and infrared wavelengths is analyzed by a microprocessor to provide the oxygen saturation (Spo2) of arterial blood based on established norms. The greater the ratio of red/ infrared absorption, the lower the arterial saturation. Arterial pulsations are identified by plethysmography, allowing corrections for light absorption by nonpulsating venous blood and tissue. Heat from the light source or sensor pressure may, rarely, result in tissue damage if the monitor is not periodically moved. No user calibration is required. 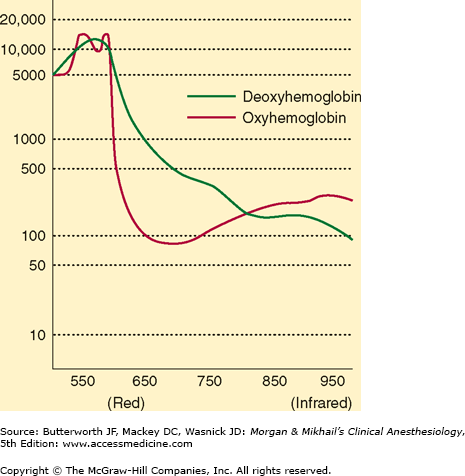 In addition to Spo2, pulse oximeters provide an indication of tissue perfusion (pulse amplitude) and measure heart rate. Because Spo2 is normally close to 100%, only gross abnormalities are detectable in most anesthetized patients. Depending on a particular patient’s oxygen-hemoglobin dissociation curve, a 90% saturation may indicate a Pao2 of less than 65 mm Hg. This compares with clinically detectable cyanosis, which requires 5 g of desaturated hemoglobin and usually corresponds to an Spo2 of less than 80%. Bronchial intubation will usually go undetected by pulse oximetry in the absence of lung disease or low fraction of inspired oxygen concentrations (FIO2).

Because carboxyhemoglobin (COHb) and HbO2 absorb light at 660 nm identically, pulse oximeters that compare only two wavelengths of light will register a falsely high reading in patients with carbon monoxide poisoning. Methemoglobin has the same absorption coefficient at both red and infrared wavelengths. The resulting 1:1 absorption ratio corresponds to a saturation reading of 85%. Thus, methemoglobinemia causes a falsely low saturation reading when Sao2 is actually greater than 85% and a falsely high reading if Sao2 is actually less than 85%.

Most pulse oximeters are inaccurate at low Spo2, and all demonstrate a delay between changes in Sao2 and Spo2. Other causes of pulse oximetry artifact include excessive ambient light, motion, methylene blue dye, venous pulsations in a dependent limb, low perfusion (eg, low cardiac output, profound anemia, hypothermia, increased systemic vascular resistance), malpositioned sensor, and leakage of light from the light-emitting diode to the photodiode, bypassing the arterial bed (optical shunting). Nevertheless, pulse oximetry can be an invaluable aid to the rapid diagnosis of hypoxia, which may occur in unrecognized esophageal intubation, and it furthers the goal of monitoring oxygen delivery to vital organs. In the recovery room, pulse oximetry helps identify postoperative pulmonary problems, such as severe hypoventilation, bronchospasm, and atelectasis.

Two extensions of pulse oximetry technology are mixed venous blood oxygen saturation (Svo2) and noninvasive brain oximetry. The former requires the placement of a pulmonary artery catheter containing fiberoptic sensors that continuously determine Svo2 in a manner analogous to pulse oximetry. Because Svo2 varies with changes in hemoglobin concentration, cardiac output, arterial oxygen saturation, and whole-body oxygen consumption, its interpretation is somewhat complex. A variation of this technique involves placing the fiberoptic sensor in the internal jugular vein, which provides measurements of jugular bulb oxygen saturation in an attempt to assess the adequacy of cerebral oxygen delivery.

Determination of end-tidal CO2 (Etco2) concentration to confirm adequate ventilation is mandatory during all anesthetic procedures, but particularly so for general anesthesia. A rapid fall of Etco2 is a sensitive indicator of air embolism, a major complication of sitting craniotomies. There are no contraindications.

Nondiverting (mainstream) capnographs measure CO2 passing through an adaptor placed in the breathing circuit (Figure 6-4). Infrared light transmission through the gas is measured and CO2 concentration is determined by the monitor. Because of problems with drift, older flowthrough models self-zeroed during inspiration. Thus, they were incapable of detecting inspired CO2, such as would occur with a breathing circuit malfunction (eg, absorbent exhaustion, sticking unidirectional valves). The weight of the sensor causes traction on the tracheal tube, and its generation of radiant heat can cause skin burns. Newer designs address these problems. 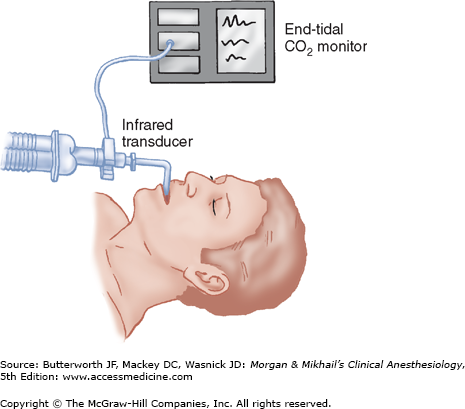 Diverting (sidestream) capnographs continuously suctions gas from the breathing circuit into a sample cell within the monitor. CO2 concentration is determined by comparing infrared light absorption in the sample cell with a chamber free of CO2. Continuous aspiration of anesthetic gas essentially represents a leak in the breathing circuit that will contaminate the operating room unless it is scavenged or returned to the breathing system. High aspiration rates (up to 250 mL/min) and low-dead-space sampling tubing usually increase sensitivity and decrease lag time. If tidal volumes (Vt) are small (eg, pediatric patients), however, a high rate of aspiration may entrain fresh gas from the circuit and dilute Etco2 measurement. Low aspiration rates (less than 50 mL/min) can retard Etco2 measurement and underestimate it during rapid ventilation. New units autocalibrate, but older units must be zeroed to room air and against a known CO2 concentration (usually 5%). Diverting units are prone to water precipitation in the aspiration tube and sampling cell that can cause obstruction of the sampling line and erroneous readings. Expiratory valve malfunction is detected by the presence of CO2 in inspired gas. Although inspiratory valve failure also results in rebreathing CO2, this is not as readily apparent because part of the inspiratory volume will still be free of CO2, causing the monitor to read zero during part of the inspiratory phase.

Other gases (eg, nitrous oxide) also absorb infrared light, leading to a pressure-broadening effect. To minimize the error introduced by nitrous oxide, various modifications and filters have been incorporated into monitor design.

Capnographs rapidly and reliably indicate esophageal intubation—a common cause of anesthetic catastrophe—but do not reliably detect bronchial intubation. Although there may be some CO2 in the stomach from swallowing expired air, this should be washed out within a few breaths. Sudden cessation of CO2 during the expiratory phase may indicate a circuit disconnection. The increased metabolic rate caused by malignant hyperthermia causes a marked rise in Etco2. 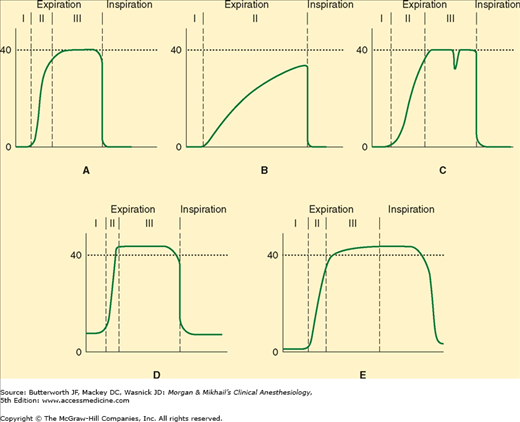 A: A normal capnograph demonstrating the three phases of expiration: phase I—dead space; phase II—mixture of dead space and alveolar gas; phase III—alveolar gas plateau. B: Capnograph of a patient with severe chronic obstructive pulmonary disease. No plateau is reached before the next inspiration. The gradient between end-tidal CO2 and arterial CO2 is increased. C: Depression during phase III indicates spontaneous respiratory effort. D: Failure of the inspired CO2 to return to zero may represent an incompetent expiratory valve or exhausted CO2 absorbent. E: The persistence of exhaled gas during part of the inspiratory cycle signals the presence of an incompetent inspiratory valve.

Analysis of anesthetic gases is essential during any procedure requiring inhalation anesthesia. There are no contraindications to analyzing these gases.

Infrared units use a variety of techniques similar to that described for capnography. These devices are all based on the Beer-Lambert law, which provides a formula for measuring an unknown gas within inspired gas because the absorption of infrared light passing through a solvent (inspired or expired gas) is proportional to the amount of the unknown gas. Oxygen and nitrogen do not absorb infrared light. There are a number of commercially available devices that use a single- or dual-beam infrared light source and positive or negative filtering. Because oxygen molecules do not absorb infrared light, their concentration cannot be measured with monitors that rely on infrared technology and, hence, it must be measured by other means (see below).

The piezoelectric method uses oscillating quartz crystals, one of which is covered with lipid. Volatile anesthetics dissolve in the lipid layer and change the frequency of oscillation, which, when compared with the frequency of oscillation of an uncovered crystal, allows the concentration of the volatile anesthetic to be calculated. Neither these devices nor infrared photoacoustic analysis allow different anesthetic agents to be distinguished. New dual-beam infrared optical analyzers do allow gases to be separated and an improperly filled vaporizer to be detected.

To measure the Fio2 of inhaled gas, manufacturers of anesthesia machines have relied on various technologies.

Galvanic cell (fuel cell) contains a lead anode and gold cathode bathed in potassium chloride. At the gold terminal, hydroxyl ions are formed that react with the lead electrode (thereby gradually consuming it) to produce lead oxide, causing current, which is proportional to the amount of oxygen being measured, to flow. Because the lead electrode is consumed, monitor life can be prolonged by exposing it to room air when not in use. These are the oxygen monitors used on many anesthesia machines in the inspiratory limb.

Oxygen is a nonpolar gas, but it is paramagnetic, and when placed in a magnetic field, the gas will expand, contracting when the magnet is turned off. By switching the field on and off and comparing the resulting change in volume (or pressure or flow) to a known standard, the amount of oxygen can be measured.