Anesthetic agents may have profound effects on cerebral metabolism, blood flow, cerebrospinal fluid (CSF) dynamics, and intracranial volume and pressure. In some instances, these alterations are deleterious, whereas in others they may be beneficial. This chapter reviews important physiological concepts in anesthetic practice and discusses the effects of commonly used anesthetics on cerebral physiology.

The brain normally consumes 20% of total body oxygen. Most cerebral oxygen consumption (60%) is used to generate adenosine triphosphate (ATP) to support neuronal electrical activity (Figure 26-1). The cerebral metabolic rate (CMR) is usually expressed in terms of oxygen consumption (CMRo2) and averages 3-3.8 mL/100 g/min (50 mL/min) in adults. CMRo2 is greatest in the gray matter of the cerebral cortex and generally parallels cortical electrical activity. Because of the relatively high oxygen consumption and the absence of significant oxygen reserves, interruption of cerebral perfusion usually results in unconsciousness within 10 sec, as oxygen tension rapidly drops below 30 mm Hg. If blood flow is not reestablished within 3-8 min under most conditions, ATP stores are depleted, and irreversible cellular injury begins to occur. The hippocampus and cerebellum seem to be most sensitive to hypoxic injury. 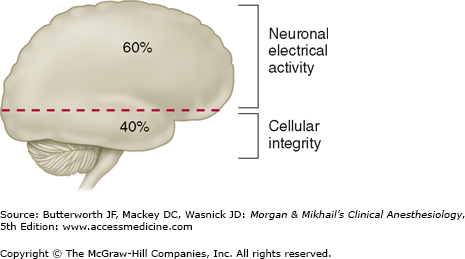 Neuronal cells normally utilize glucose as their primary energy source. Brain glucose consumption is approximately 5 mg/100 g/min, of which more than 90% is metabolized aerobically. CMRo2 therefore normally parallels glucose consumption. This relationship is not maintained during starvation, when ketone bodies (acetoacetate and β-hydroxybutyrate) also become major energy substrates. Although the brain can also take up and metabolize lactate, cerebral function is normally dependent on a continuous supply of glucose. Acute sustained hypoglycemia is injurious to the brain. Paradoxically, hyperglycemia can exacerbate global and focal hypoxic brain injury by accelerating cerebral acidosis and cellular injury. Tight control of perioperative blood glucose concentration has been advocated in part because of adverse effects of hyperglycemia during ischemic episodes; however, overzealous blood glucose control can likewise produce injury through iatrogenic hypoglycemia.

Cerebral blood flow (CBF) varies with metabolic activity. There are a variety of methods available to directly measure CBF. These methods include: positron emission tomography, xenon enhanced computed tomography, single photon emission computed tomography, and computed tomography perfusion scans. These methods do not lend themselves to bedside monitoring of CBF. Blood flow studies confirm that regional CBF parallels metabolic activity and can vary from 10-300 mL/100 g/min. For example, motor activity of a limb is associated with a rapid increase in regional CBF of the corresponding motor cortex. Similarly, visual activity is associated with an increase in regional CBF of the corresponding occipital visual cortex.

Indirect measures are often used to estimate the adequacy of CBF and brain tissue oxygen delivery in clinical settings. These methods include:

Cerebral perfusion pressure (CPP) is the difference between mean arterial pressure (MAP) and intracranial pressure (ICP) (or central venous pressure [CVP], if it is greater than ICP). MAP – ICP (or CVP) = CPP. CPP is normally 80-100 mm Hg. Moreover, because ICP is normally less than 10 mm Hg, CPP is primarily dependent on MAP.

Moderate to severe increases in ICP (>30 mm Hg) can compromise CPP and CBF, even in the presence of a normal MAP. Patients with CPP values less than 50 mm Hg often show slowing on the EEG, whereas those with a CPP between 25 and 40 mm Hg typically have a flat EEG. Sustained perfusion pressures less than 25 mm Hg may result in irreversible brain damage.

Much like the heart and kidneys, the brain normally tolerates a wide range of blood pressure, with little change in blood flow. The cerebral vasculature rapidly (10-60 s) adapts to changes in CPP. Decreases in CPP result in cerebral vasodilation, whereas elevations induce vasoconstriction. In normal individuals, CBF remains nearly constant between MAPs of about 60 and 160 mm Hg (Figure 26-2). Beyond these limits, blood flow becomes pressure dependent. Pressures above 150-160 mm Hg can disrupt the blood-brain barrier (see below) and may result in cerebral edema and hemorrhage. 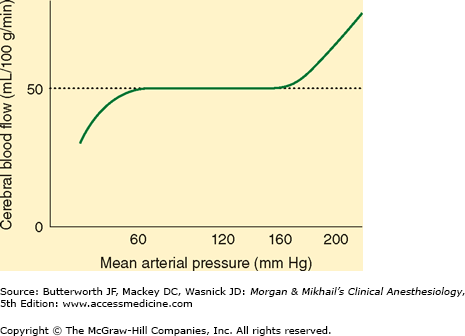 The most important extrinsic influences on CBF are respiratory gas tensions—particularly Paco2. CBF is directly proportionate to Paco2 between tensions of 20 and 80 mm Hg (Figure 26-3). Blood flow changes approximately 1-2 mL/100 g/min per mm Hg change in Paco2. This effect is almost immediate and is thought to be secondary to changes in the pH of CSF and cerebral tissue. Because ions do not readily cross the blood-brain barrier (see below) but CO2 does, acute changes in Paco2 but not HCO3– affect CBF. Thus, acute metabolic acidosis has little effect on CBF because hydrogen ions (H+) cannot readily cross the blood-brain barrier. After 24-48 hr, CSF HCO3– concentration adjusts to compensate for the change in Paco2, so that the effects of hypocapnia and hypercapnia are diminished. Marked hyperventilation (Paco2 < 20 mm Hg) shifts the oxygen-hemoglobin dissociation curve to the left, and, with changes in CBF, may result in EEG changes suggestive of cerebral impairment, even in normal individuals. 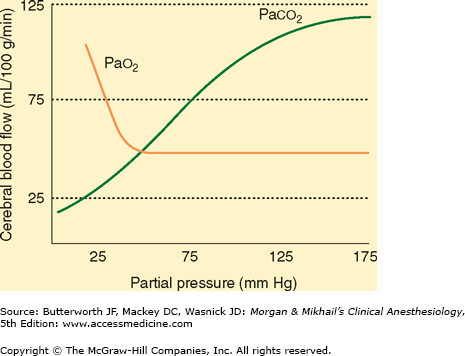 Cerebral blood vessels are unique in that the junctions between vascular endothelial cells are nearly fused. The paucity of pores is responsible for what is termed the blood-brain barrier. This lipid barrier allows the passage of lipid-soluble substances, but restricts the movement of those that are ionized or have large molecular weights.

Thus, the movement of a given substance across the blood-brain barrier is governed simultaneously by its size, charge, lipid solubility, and degree of protein binding in blood. Carbon dioxide, oxygen, and lipid-soluble molecules (such as most anesthetics) freely enter the brain, whereas most ions, proteins, and large substances (such as mannitol) penetrate poorly.

Water moves freely across the blood-brain barrier as a consequence of bulk flow, whereas movement of even small ions is impeded (the equilibration half-life of Na+ is 2-4 h). As a result, rapid changes in plasma electrolyte concentrations (and, secondarily, osmolality) produce a transient osmotic gradient between plasma and the brain. Acute hypertonicity of plasma results in net movement of water out of the brain, whereas acute hypotonicity causes a net movement of water into the brain. These effects are short-lived, as equilibration eventually occurs, but, when marked, they can cause rapid fluid shifts in the brain. Mannitol, an osmotically active substance that does not normally cross the blood-brain barrier, causes a sustained decrease in brain water content and is often used to decrease brain volume.

The blood-brain barrier may be disrupted by severe hypertension, tumors, trauma, strokes, infection, marked hypercapnia, hypoxia, and sustained seizure activity. Under these conditions, fluid movement across the blood-brain barrier becomes dependent on hydrostatic pressure rather than osmotic gradients.

CSF is found in the cerebral ventricles and cisterns and in the subarachnoid space surrounding the brain and spinal cord. Its major function is to protect the central nervous system (CNS) against trauma.

Most of the CSF is formed by the choroid plexuses of the cerebral (mainly lateral) ventricles. Smaller amounts are formed directly by the ventricles’ ependymal cell linings, and yet smaller quantities are formed from fluid leaking into the perivascular spaces surrounding cerebral vessels (blood-brain barrier leakage). In adults, normal total CSF production is about 21 mL/hr (500 mL/d), yet total CSF volume is only about 150 mL. CSF flows from the lateral ventricles through the intraventricular foramina (of Monro) into the third ventricle, through the cerebral aqueduct (of Sylvius) into the fourth ventricle, and through the median aperture of the fourth ventricle (foramen of Magendie) and the lateral apertures of the fourth ventricle (foramina of Luschka) into the cerebellomedullary cistern (cisterna magna) (Figure 26-4). From the cerebello-medullary cistern, CSF enters the subarachnoid space, circulating around the brain and spinal cord before being absorbed in arachnoid granulations over the cerebral hemispheres. 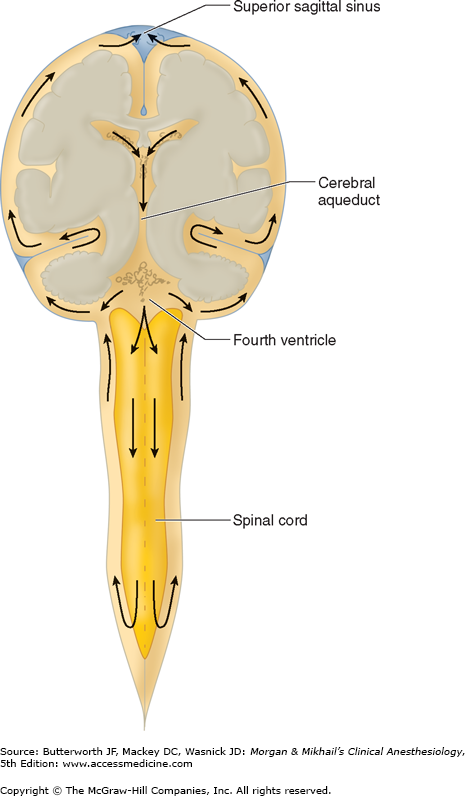 Absorption of CSF involves the translocation of fluid from the arachnoid granulations into the cerebral venous sinuses. Smaller amounts are absorbed at nerve root sleeves and by meningeal lymphatics. Because the brain and spinal cord lack lymphatics, absorption of CSF is also the principal means by which perivascular and interstitial protein is returned to the blood.

The cranial vault is a rigid structure with a fixed total volume, consisting of brain (80%), blood (12%), and CSF (8%). Any increase in one component must be offset by an equivalent decrease in another to prevent a rise in ICP. By convention, ICP means supratentorial CSF pressure measured in the lateral ventricles or over the cerebral cortex and is normally 10 mm Hg or less. Minor variations may occur, depending on the site measured, but, in the lateral recumbent position, lumbar CSF pressure normally approximates supratentorial pressure.

Intracranial elastance is determined by measuring the change in ICP in response to a change in intracranial volume. Normally, small increases in volume of one component are initially well compensated (Figure 26-5). A point is eventually reached, however, at which further increases produce precipitous rises in ICP. Major compensatory mechanisms include: (1) an initial displacement of CSF from the cranial to the spinal compartment, (2) an increase in CSF absorption, (3) a decrease in CSF production, and (4) a decrease in total cerebral blood volume (primarily venous). 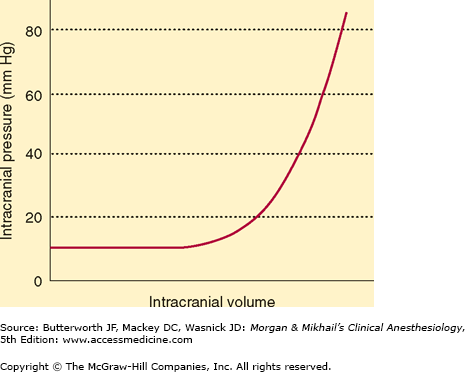