•   Evaluate the patient’s reaction to treatment.

•   Allow patients to experience pain relief of the nerve block.

•   Can predict the effect of spinal cord stimulation.

•   Prevent exacerbation of chronic pain syndromes, such as complex regional pain syndrome, when trauma (such as surgery) is anticipated.

Sympathetic nerve blocks are used routinely to provide short-term regional analgesia, and their efficacy for this application is well established. Though the effect of local anesthetics can be prolonged by the addition of epinephrine, any resulting analgesia eventually diminishes. Thus, even successful therapeutic blockade is not curative. In the context of interdisciplinary pain management, however, sympathetic blocks can be used to facilitate rehabilitation in patients with chronic noncancer pain.

Although the popularity of sympathetic blocks has generally decreased, mainly due to the scarcity of evidence from randomized controlled trials, the procedure continues to be valuable in treating CRPS. An interdisciplinary treatment protocol for CRPS, developed under the aegis of the International Association for the Study of Pain, positions sympathetic blocks early to support physical rehabilitation (Figure 47-1). If blockade is not sustained or progressively longer with each injection, sympathetic blockade should be abandoned and a trial of spinal cord stimulation (SCS) initiated. Among the advantages of sympathetic blocks and SCS are that both are minimally invasive and neither involves neuroablation. 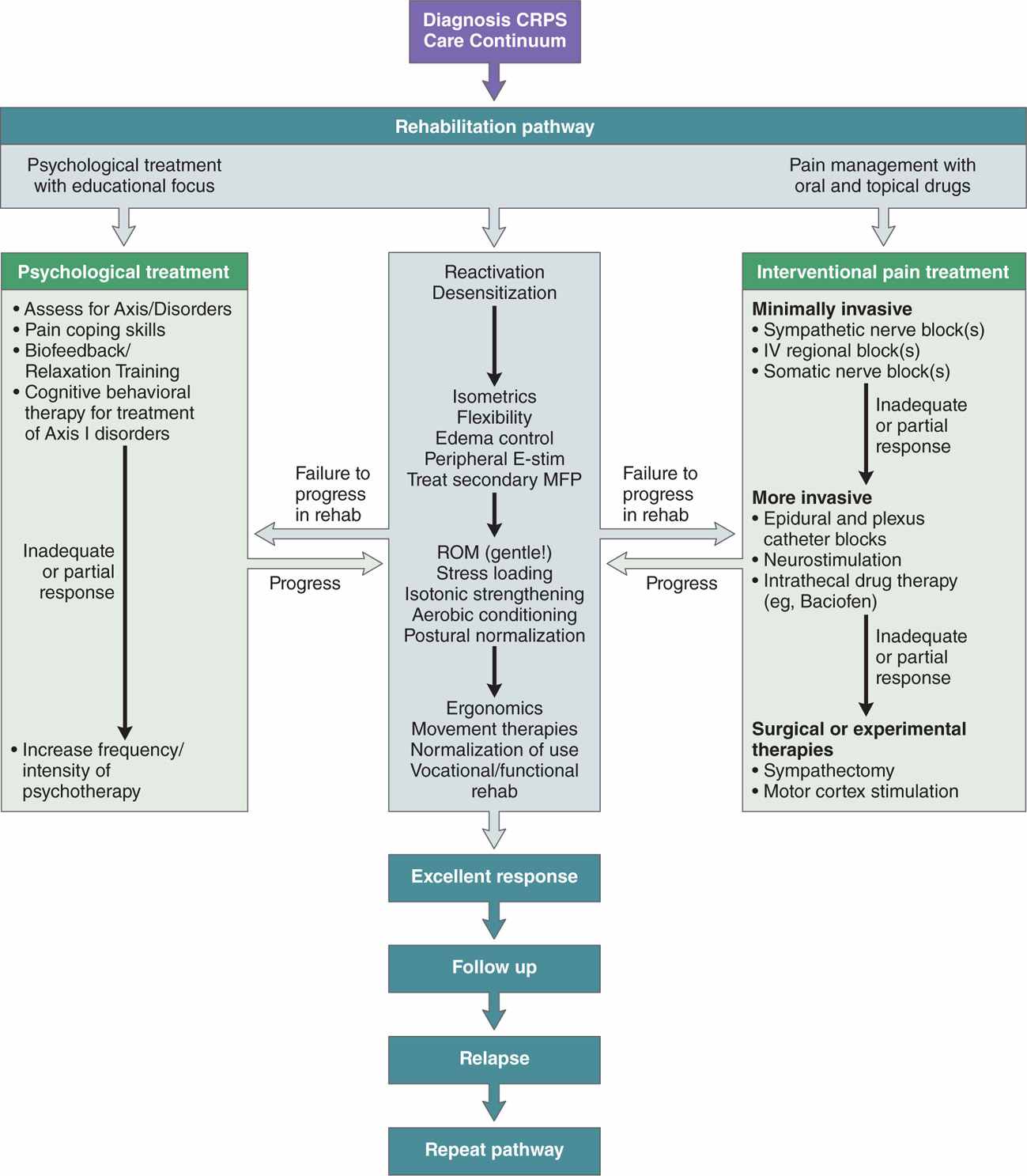 •   Sympathetically maintained pain requires a coupling of sympathetic noradrenergic neurons and primary afferent neurons in the periphery of the body.

•   The long-lasting pain relief achieved by temporary sympathetic blockade clearly implies that sympathetic neurons, which are of central origin, maintain a positive feedback circuit through the primary afferent neurons.

•   A temporary block of the sympathetically mediated activity—lumbar sympathetic ganglia (anterior L2 and L3), for example—affects both the central state of hyperexcitability and the afferent neurons.

•   The contribution of the sympathetic system to a patient’s pain can be determined by selectively blocking autonomic pathways that are separate from somatic nerve fibers.

•   Injection of local anesthetics near sympathetic ganglia is intended to disrupt pain transmission temporarily and may reset sympathetic tone to a normal state.

•   Tissue damage may also be minimized by the increase in peripheral blood flow that accompanies sympathetic block.

•   Pain relief or reduction following the procedure confirms that the patient’s acute or chronic pain was sympathetically mediated.

•   Decreased pain may allow inflamed tissues to heal and physical therapy or rehabilitation to commence.

•   There is also some evidence that early sympathetic blocks may prevent development of CRPS.

Patients who should not receive a sympathetic block include those patients who:

•   Have a bleeding diathesis

•   Have an active infection near the injection site

•   The lumbar sympathetic chain consists of 4 to 5 paired ganglia that are located over the anterolateral surface of the second through fourth lumbar vertebra.

•   Lumbar sympathetic ganglia are variable in number and location from one individual to another.

•   The cell bodies that connect to the lumbar sympathetic ganglia lie in the anterolateral region of the spinal cord from T11 to L2 and contributions vary from T10 to L3.

•   The preganglionic fibers exit the spinal canal via the corresponding ventral spinal nerve root, and join the sympathetic chain as white rami communicantes and then synapse within the corresponding ganglion.

•   Postganglionic fibers leave the chain to join the diffuse perivascular plexus around the femoral and iliac arteries, via the grey rami communicantes to join the nerve roots that produce the lumbar and lumbosacral plexuses.

•   The largest portion of the lumbar sympathetic ganglia is located in the area of the lower second and upper third lumbar vertebrae. Thus, blockade of these ganglia result in near complete sympathetic block of the lower extremities.

•   In the lumbar region, the two-bilateral sympathetic chains are connected segmentally to the spinal cord by preganglionic neurons, whose cell bodies are situated in the lateral horn, intermediate nucleus, and paracentral nuclei of the thoracolumbar spinal cord. These nerves are responsible for vasoconstriction in the lower limbs.

•   Each lumbar sympathetic chain enters the retroperitoneal space under the right and left crura, continuing inferiorly between the anterolateral aspect of the vertebral bodies and the psoas muscle to enter the pelvis.

•   The sympathetic ganglia of the lumbar sympathetic chain are variable in numbers, size, and position.

The needle is placed 1 cm below the ipsilateral rib approximately 8 cm from the midline (depending on body habitus). The needle is then directed to the anterolateral aspect of the body of L2 and then, after the needle is withdrawn, to the body of L3.

Sympathetic blocks should be performed by experienced pain specialists, because diagnostic and prognostic information can be lost if the block is not properly performed or evaluated. Requirements for optimal results are listed in. The procedure should be performed where the patient can be adequately monitored and managed should an adverse event occur (Table 47-2).