Electronic fetal heart rate monitoring (EFM) technologies and ultrasound are the primary surveillance tools used for fetal evaluation in an obstetric triage setting. Approximately 85% of live births in the United States are assessed with EFM, making it one of the most widely used obstetric tools (Freeman, Garite, Nageotte, & Miller, 2012; Tucker, Miller, & Miller, 2009). Technologic advances have produced a machine that provides clinicians with a valuable tool to display fetal heart rate (FHR) patterns accurately. The benefits of EFM include decreased intrapartum death rates, improved Apgar scores, and the determination of well-being in the high-risk fetus. The goals of fetal evaluation are to accurately identify the well-oxygenated fetus so that unnecessary intervention is avoided as well as recognize the fetus at risk, thus preventing adverse perinatal outcomes (American College of Obstetricians and Gynecologists [ACOG], 2014; Devoe, 2008; L. A. Miller, Miller, & Cypher, 2017; Signore, Freeman, & Spong, 2009). Common maternal and fetal indications for EFM testing in an obstetric triage setting are presented in Exhibit 12.1.

126Despite widespread use of these technologies, there is limited evidence to guide the type of test, testing intervals, gestational ages at which to initiate testing, or optimal frequency of testing (Signore et al., 2009). Key measures of the effectiveness of a test include the false negative rate (incidence of fetal death within 1 week of normal antepartum test) and the false positive rate (abnormal test that prompts delivery of a healthy fetus; L. A. Miller et al., 2017). These rates are presented for each of the current testing methods as described in Table 12.1.

Nonstress tests (NSTs) are often the first cardiotocographic test performed in assessing fetal well-being and are initiated for a variety of maternal and fetal conditions. The characteristics of the baseline FHR unrelated to contractions are observed with healthy fetuses displaying normal fluctuations and oscillations in the baseline. In addition, the presence of accelerations correlates with fetal well-being (Freeman et al., 2012) and normal fetal autonomic functioning (ACOG, 2014). Absence of accelerations on a baseline FHR tracing can be associated with a fetal sleep cycle, medication administration, congenital abnormalities, or adverse fetal outcomes (Signore et al., 2009) and acidosis (ACOG, 2014; Freeman et al., 2012).

Both the external tocodynamometer and the ultrasound transducer are secured to the woman’s abdomen to record uterine contractions and FHR, respectively. A separate “event marker” button is given to the mother to record perceived fetal movements. The fetal monitor tracing is recorded for 20 minutes during which clinicians can observe FHR baseline, variability, and the presence or absence of accelerations, decelerations, and contractions, along with maternal perception of fetal movements. A review of FHR nomenclature and definitions is given in Table 12.2. 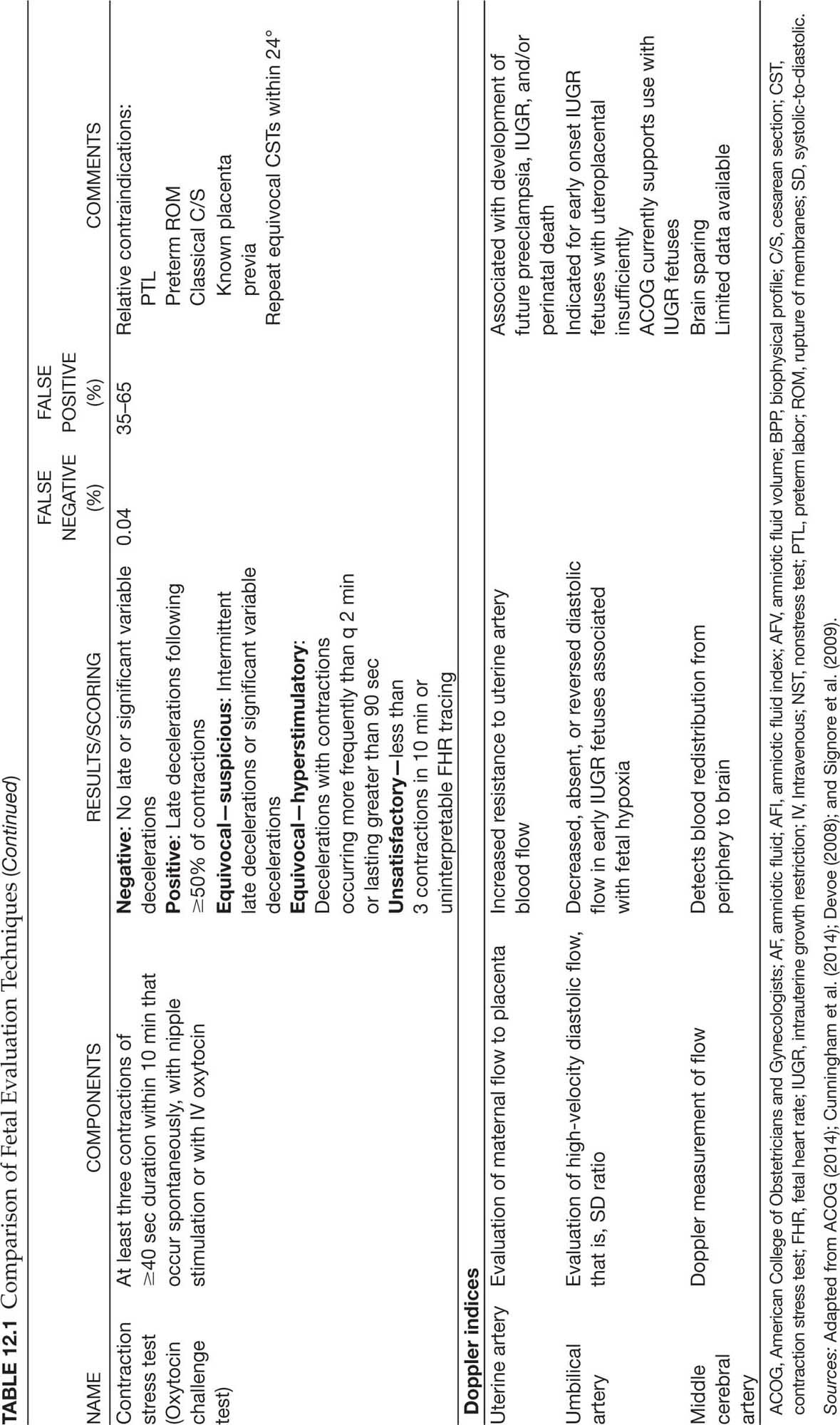 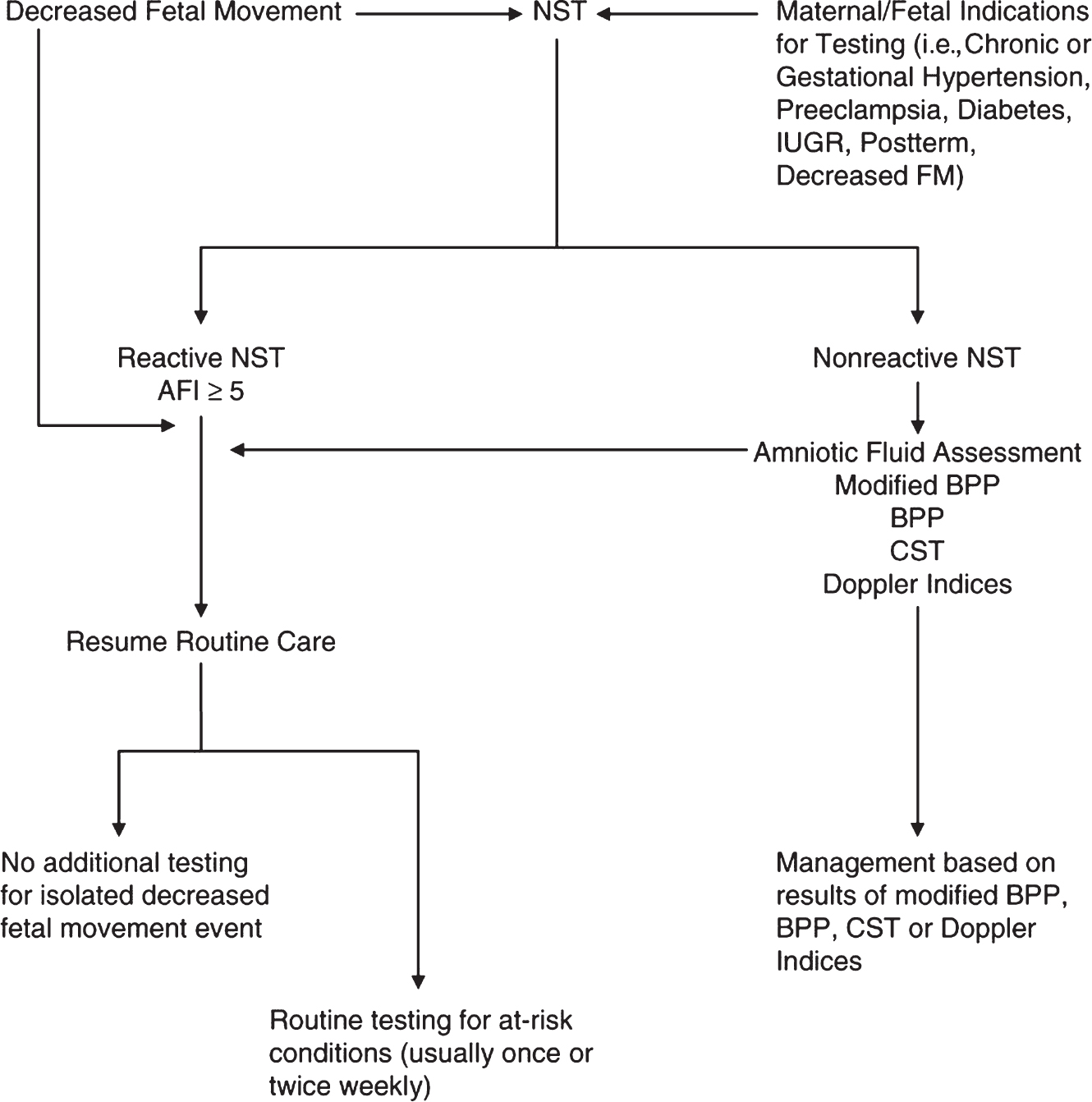