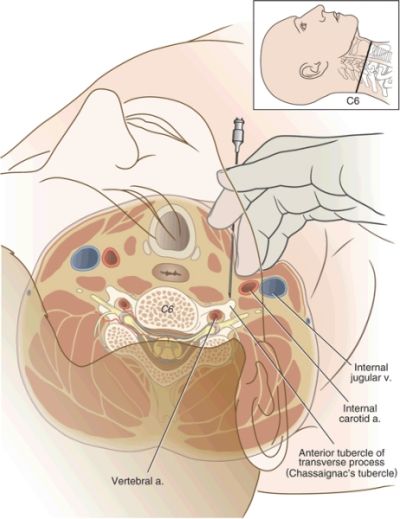 FIGURE 22-1. Axial diagram of stellate ganglion block. The great vessels of the neck are gently retracted laterally and the needle is seated on the anterior tubercle of the transverse process of C6 (Chassaignac’s tubercle). Note the position of the vertebral artery within the foramen transversarium, the spinal nerve and dural cuff, and the carotid artery and jugular vein.

Arterial injections do not offer the same measure of safety. As little as 2.5 mg of bupivacaine or a mixture of 1.25 mg of bupivacaine and 5 mg of lidocaine injected into the vertebral or internal carotid artery has been reported to produce almost immediate generalized seizure.6 Vertebral injections occur when the needle is inserted too medially and posteriorly. The practitioner often contacts the bone but mistakes the posterior tubercle for the anterior tubercle. Slight withdrawal of the needle from the posterior tubercle, particularly if in a medial position, can produce a vertebral artery injection.

Rarely is this procedure performed secondary to direct inflammation of the ganglion. Sympathetic blocks (e.g., stellate ganglion block) are performed diagnostically and therapeutically to produce sympathetic denervation. Local anesthetics effectively block these nerves temporarily. Long-term benefits have been reported following local anesthetic blocks. The addition of corticosteroids has not been demonstrated to enhance the effect of the local anesthetic. If there has been trauma at the site of the ganglion (e.g., a gunshot wound), injection of corticosteroid with local anesthetic would seem reasonable. Routine administration of corticosteroid in these injections might be questioned because of the risk of intra-arterial injection into the vertebral, carotid, or spinal radicular artery. Specifically, particulate corticosteroids (suspensions such as methylprednisolone acetate) can cause an embolic stroke if unintentionally injected into any of these arteries.

The cervical spinal nerves traverse the intervertebral foramen near the location for a stellate ganglion block (Fig. 22-1). If the needle is positioned posterior to the anterior tubercle, it can be placed into either the epidural compartment or into a dural sleeve that accompanies the spinal nerve. Whereas cerebrospinal fluid would be expected upon aspiration if the needle were inside the subarachnoid space, this may be overlooked as the practitioner focuses on the more likely risk of vascular aspiration and injection. Paresthesias in the distribution of the brachial plexus may or may not occur. If present, one should consider repositioning the needle more anteriorly.

Epidural injection of 10 mL of local anesthetic at the C6 or C7 level produces variable effects and is dependent on the concentration of local anesthetic and on whether the entire volume of drug is injected. In our experience, epidural injection (with high concentration of local anesthetic) can produce a profound sensory and motor block but often spares the phrenic nerve. Subjective respiratory distress is common secondary to the block of the intercostal nerves. It is important to understand the delayed onset of epidural blockade, particularly with bupivacaine or ropivacaine, where 15 to 20 minutes are required until the most profound effects of the local anesthetic are apparent. Thus, assuring that patients are monitored closely for this interval is essential.

Intrathecal injection of local anesthetic at this site commonly produces a total spinal block. Loss of airway reflexes and phrenic nerve function often occurs. Patients often describe as initial symptoms difficulty breathing or an inability to move their arms. Contralateral motor block develops as further confirmation of intrathecal injection along with the block of the lower extremities.

Recurrent laryngeal and phrenic nerve blocks are frequent side effects of a stellate ganglion block. They occur from local anesthetic injection that spills from the area of the ganglion. Because diffusion of drug is required to obtain a satisfactory block, it can be expected that these nerves will often be temporarily blocked. Symptoms of a recurrent laryngeal nerve block include hoarseness and, occasionally, respiratory stridor. Patients often complain of difficulty in getting their breath and the sensation of a lump in the throat. Phrenic nerve block rarely presents as a problem for patients unless they have preexisting and severe respiratory compromise. The potential for producing phrenic nerve block is one reason bilateral stellate ganglion blocks are rarely performed at the same time. Most practitioners wait several days to a week between injections.

Ptosis (drooping of the upper eyelid)

Enophthalmos (recession of the globe within the orbit)

Venodilation in the hand and forearm

A study by Hogan et al.8 examined the distribution and spread of contrast following stellate ganglion block using magnetic resonance imaging. They found that injectate was not delivered to the stellate ganglion but rather passed anterior to it (with or without caudad extension to the stellate ganglion). This could produce Horner’s syndrome but not sympathetic denervation to the extremity. Other sites of spread included the brachial plexus, the subclavian plexus, and the epidural or subarachnoid spaces.

The pleural dome of the lung extends variably above the first rib. Most commonly, this dome passes laterally to the intended C6 injection site for the stellate ganglion block (Fig. 22-2). In the anterior C7 approach to the stellate ganglion, the pleural dome is closer and may be entered in unusual cases. This can be accentuated in patients with pulmonary disease and hyperinflated lungs, such as patients with chronic obstructive pulmonary disease. 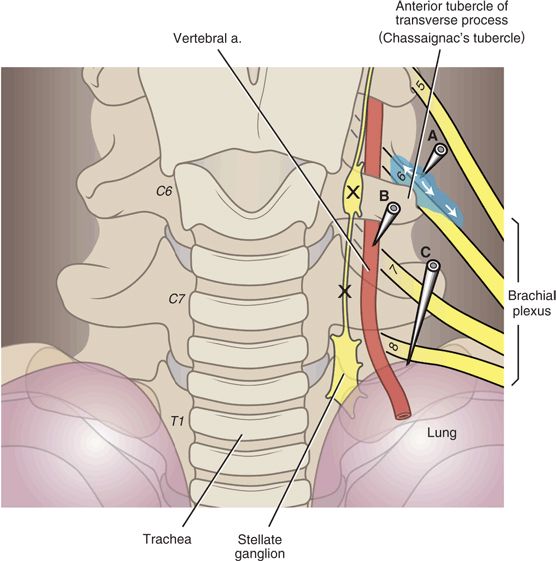 FIGURE 22-2. Complications of stellate ganglion block. The stellate ganglion conveys sympathetic fibers to and from the upper extremities and the head and neck. The ganglion is comprised of the fused superior thoracic ganglion and the inferior cervical ganglion and is named for its fusiform shape (in many individuals, the two ganglia remain separate). The stellate ganglia lie over the head of the first rib at the junction of the transverse process and uncinate process of T1. The ganglion is just posteromedial to the cupola of the lung and medial to the vertebral artery, and these are the two structures most vulnerable. Stellate ganglion block is typically carried out at the C6 or C7 level to avoid pneumothorax, and a volume of solution that will spread along the prevertebral fascia inferiorly to the stellate ganglion is employed (usually 10 mL). When radiographic guidance is not used, the operator palpates the anterior tubercle of the transverse process of C6 (Chassaignac’s tubercle), and a needle is seated in the location. With radiographic guidance, it is simpler and safer to place a needle over the vertebral body just inferior the uncinate process of C6 or C7. Incorrect needle placement can lead to (A) spread of the injectate adjacent to the spinal nerves where they join to form the brachial plexus, (B) damage to the vertebral artery or intraarterial injection, or (C) pneumothorax. Local anesthetic can also course proximally along the spinal nerves to the epidural space. (Modified from Rathmell JP. Atlas of Image-guided Intervention in Regional Anesthesia and Pain Medicine. 2nd ed. Philadelphia, PA: Lippincott Williams & Wilkins, 2012, with permission.)

The posterior approach to the upper thoracic sympathetic chain is extremely close to the parietal pleura. Anyone using this approach should be cautious and guided by fluoroscopy or computed tomographic techniques. Pneumothorax can result despite careful attention to detail, and patients should be warned of this potential complication prior to a posterior approach of the sympathetic chain or stellate ganglion.

A hematoma following a stellate ganglion block is always possible. Indeed, paratracheal hematoma causing airway obstruction and death has been reported after stellate ganglion block.10 This occurs most commonly if the vertebral artery or carotid artery has been entered. A more serious, although very rare, situation develops if a plaque is dislodged following unintentional arterial puncture of either the carotid or the vertebral artery. Presentation would be expected to mimic an evolving stroke. This should be viewed as a medical emergency, with life support and direct transport to an emergency facility.

Similarly, unintentional puncture can also produce an arterial wall dissection. This is more likely in the rare situation in which the needle rests in the wall of the artery, negative aspiration is noted, and subsequent injection of the local anesthetic produces the dissection. Symptomatic patients should be stabilized or resuscitated and taken directly to an emergency facility.

Infections are very uncommon following stellate ganglion injections, but there are case reports of cervical vertebral osteomyelitis.11,12 In our practice, alcohol preparation of the site and the use of good technique with sterile surgical gloves have prevented any infectious complication in 20 years’ experience. More formal surgical preparation with a betadine (or similar) solution and sterile drape is reasonable and warranted. Many examiners believe it is important, however, to watch the patient during the injection for immediate feedback if an intravascular injection occurs. Thus, draping the patient’s face should be avoided or performed carefully. If an infection occurs, the most likely organism would be a strain of Staphylococcus unless the esophagus was inadvertently entered. Because the needle can contact the bone during the procedure, any infection should be treated with antibiotics and followed closely. An infectious disease consultation should be considered in patients who do not respond to a course of oral antibiotics.

Two separate case reports have reported a transient locked-in syndrome following stellate ganglion block.13,14 In both cases, the patient remained conscious but was unable to breathe or move, with sparing of eye movement. The authors of both reports believed these cases were the result of intra-arterial injections of the vertebral artery. In our practice, we have seen two cases of a similar presentation in 20 years. However, we attributed both cases to acquiring a total spinal injection. Whether these cases represent a different phenomenon or a misdiagnosis is unclear. Fortunately, in all four cases (ours and the published cases), the patients recovered uneventfully. Care should be taken to provide sedation and frequent reassurance to these patients, as they are conscious but unable to move or breathe. 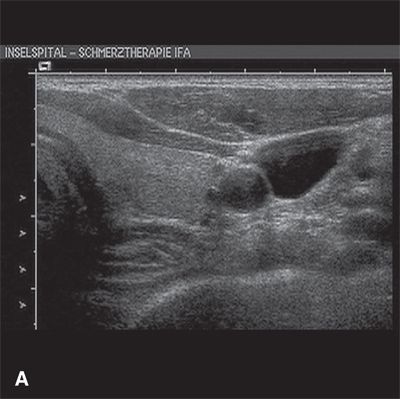 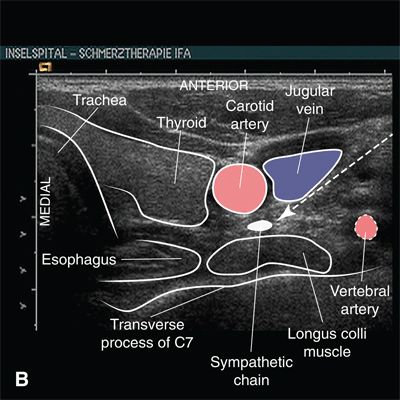 FIGURE 22-3. Anatomy relevant to stellate ganglion block as seen on ultrasound. A: Transverse (short-axis) ultrasound view at the level of the transverse process of C7. B: Labeled image. Note that the vertebral artery can be seen anterior to the echogenic transverse process at the level of C7. The vertebral artery cannot be seen clearly at the C6 level on ultrasound, as it lies posterior to the echogenic transverse process within the foramen transversarium. At the level of C7, the superior margin of the thyroid is seen just lateral to the trachea. The dashed arrow indicates the optimal trajectory for placing a needle using an in-plane approach, for example placing the needle in a lateral to medial direction with the shaft in the transverse plane of the ultrasound image. (Ultrasound image courtesy of Urs Eichenberger MD, PhD, University Department of Anesthesiology and Pain Therapy, University Hospital of Bern, Bern, Switzerland, 2011. Reproduced from Rathmell JP. Atlas of Image-guided Intervention in Regional Anesthesia and Pain Medicine. 2nd ed. Philadelphia, PA: Lippincott Williams & Wilkins, 2012, with permission.)

< div class='tao-gold-member'>
Only gold members can continue reading. Log In or Register to continue