Anesthesia for Surgery During Pregnancy

The incidence of surgery during pregnancy is between 0.3% and 2.0%.1,2 There are approximately 4,000,000 deliveries per year in the United States; this translates to approximately 80,000 anesthetics per year administered to pregnant women for intercurrent surgical procedures. In actuality, this may be an underestimate due to surgery performed prior to clinical recognition of the pregnancy. Surgery may be required at any time during pregnancy, and appendectomy is the most frequently performed nonobstetric operation.3

Anesthesia for the pregnant woman is one of the rare situations where the anesthesiologist contends with two patients—the mother and the unborn fetus. Therefore, providing a safe anesthetic requires an understanding of the physiologic changes of pregnancy and the impact of anesthesia and surgery on the developing fetus.

The pregnant woman undergoes significant physiologic changes to allow adaptation for the developing fetus. These changes are discussed in Chapter 1 and summarized in Table 12-1. 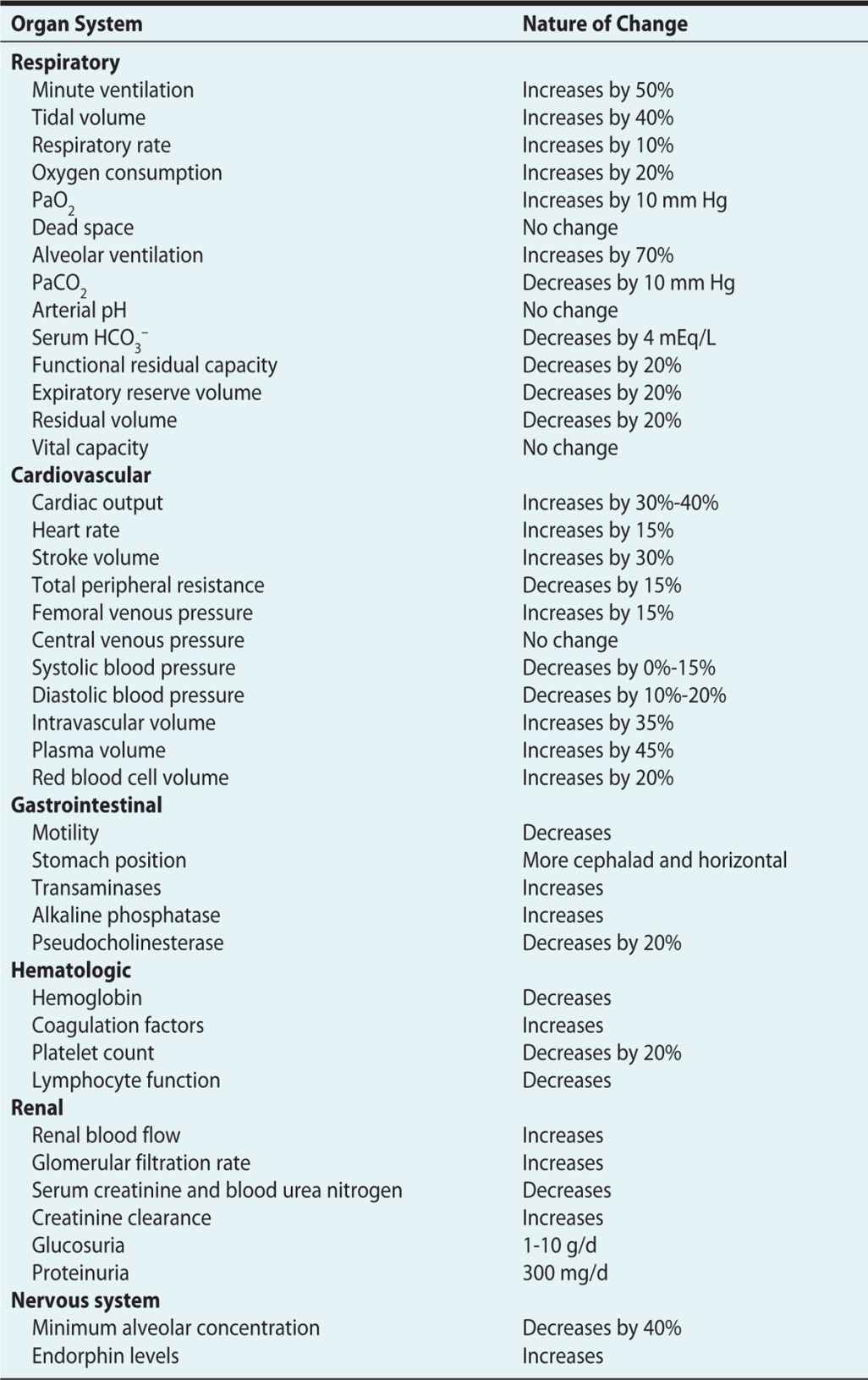 A teratogen is a substance that produces an increase in the incidence of a defect that cannot be attributed to chance. To produce a defect, the teratogen must be administered in a sufficient dose at a critical point in development. In humans, this critical point is during organogenesis, which extends from 15 to approximately 60 days gestational age. Each organ system has its own unique period of susceptibility depending on when it develops. For example, the heart differentiates between the third and sixth weeks and the palate between the six and eighth weeks. It is important to note that the central nervous system does not fully develop until after birth; therefore, the critical time for this system may extend beyond gestation.

Well-controlled randomized human studies are essentially impossible to perform because of either ethical considerations or the large number of patients required. A study designed to find a two fold increase in the incidence of a congenital defect with an incidence of 1:5000 (eg, anencephaly) would require more than 23,000 participants. Four approaches have been utilized to study the effects of anesthetic agents or anesthesia in the pregnant patient: (1) animal studies, (2) retrospective human studies, (3) studies of operating room personnel chronically exposed to trace concentrations of inhaled anesthetics, and (4) outcome studies of women who underwent surgery while pregnant.

Almost all anesthetic agents have been found teratogenic in some animal models. However, the results of animal studies are of limited value because of (1) species variations, (2) the doses of anesthetic agents used in animal studies were usually far greater than those used in humans, and (3) other factors such as hypercarbia, hypothermia, and hypoxemia (known teratogens) were neither measured or nor controlled. Species variation is particularly important. Thalidomide has no known teratogenic effects on rats and was approved by the US Food and Drug Administration (FDA) for use in humans. It is now known that thalidomide is teratogenic in humans.4

The FDA has established a risk classification system to help physicians weigh the risks and benefits when choosing therapeutic agents for the pregnant woman (Table 12-2).5 To date, only five drugs are known to be teratogens, and none of them are anesthetic agents. These drugs include thalidomide, isotrentinoin, coumarin, valproic acid, and folate antagonists.6 Most anesthetic agents, including the intravenous induction agents, local anesthetics, opioids, and neuromuscular blocking drugs have been assigned a category B or C classification (Table 12-3). Indeed, only the benzodiazepines have been assigned as category D and none a category D. For the purposes of this chapter, discussion of individual anesthetic agents will be limited to those whose use is controversial—nitrous oxide and benzodiazepines.

Category C: Risk cannot be ruled out. Human studies have not been adequately performed and animal studies are positive or have not been conducted. Potential benefits may justify the risk.

Category D. Potential evidence of risk: Confirmed evidence of human risk. However, benefits may be acceptable despite the known risk (ie, no other medication is available to treat a life-threatening situation).

Category X: Contraindicated in pregnancy. Human or animal studies have shown fetal risk that clearly outweighs any possible benefit to the patient. 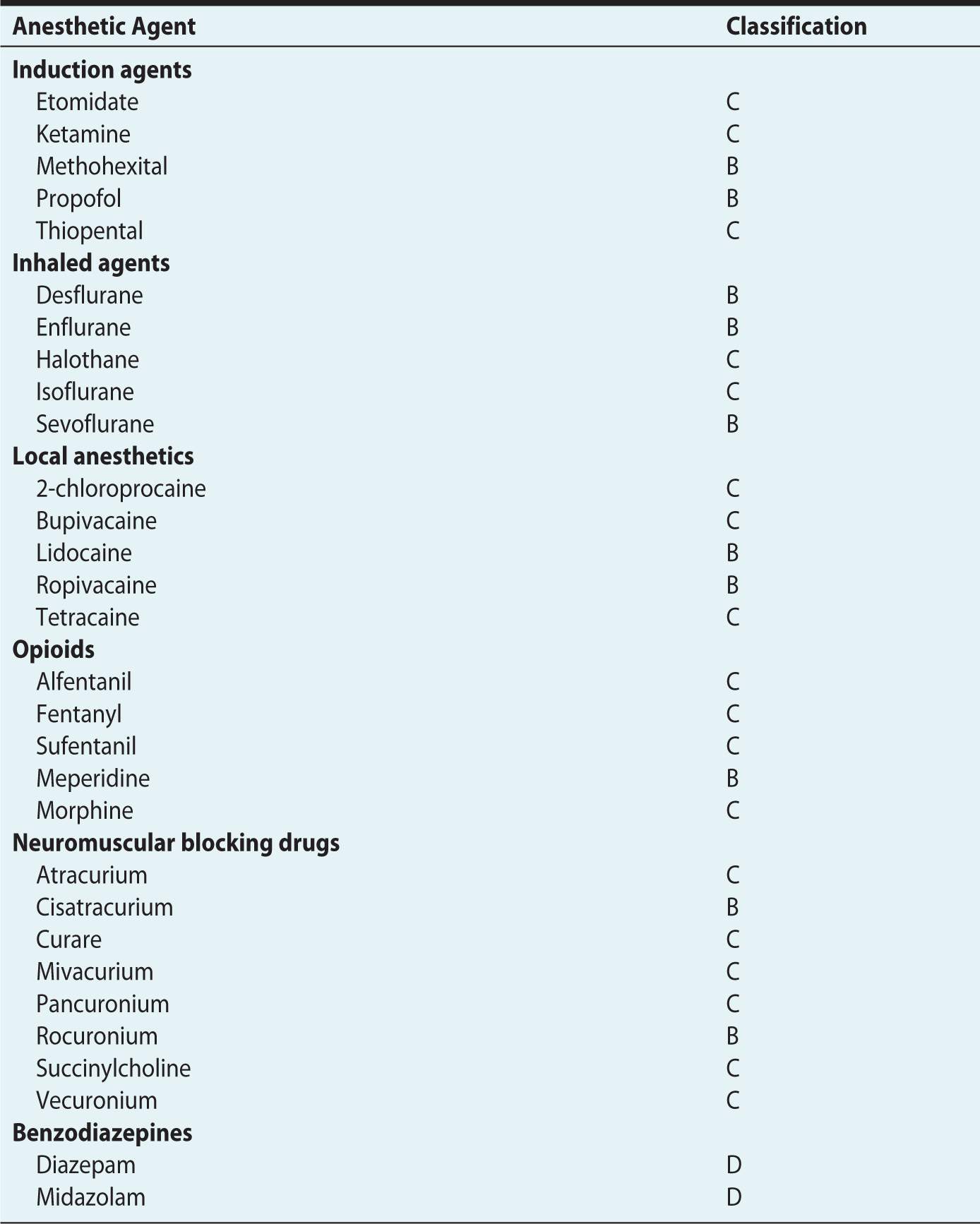 Benzodiazepines exert their action through the inhibition of gamma-aminobutyric acid (GABA) receptors in the central nervous system. GABA has been shown to inhibit palate shelf reorientation, thus leading to cleft palate formation. Some investigators, in human retrospective studies, noted an association between diazepam ingestion in the first 6 weeks of pregnancy and cleft palate.11 These findings have been questioned in prospective studies that did not demonstrate an association.12 It is important to remember that in all these studies the assessment was in women chronically exposed to benzodiazepines and not in women with a one-time low dose exposure as typically occurs during surgery. The FDA has assigned benzodiazepines a category D designation and although controversial, this author prefers not to use benzodiazepines during nonobstetric surgery unless there is a compelling reason to do so.

There have been two approaches to assess the effects of anesthetic agents on pregnancy outcome: (1) large retrospective epidemiologic surveys of women chronically exposed to anesthetic gases and (2) retrospective database studies comparing women who underwent surgery while pregnant to those who did not.

A number of epidemiologic studies were performed in the 1970s to determine the health hazards, including birth defects and spontaneous abortions, of chronic exposure to anesthetic gases.13 All the studies produced similar results, and the most consistent finding was that the rate of miscarriage in exposed women is approximately 25% to 30% greater than in nonexposed women. The American Society of Anesthesiologists (ASA), concerned with the findings, sponsored a large study and found similar results.14 The authors surveyed 73,496 individuals who may have been exposed to anesthetic gases. These personnel received questionnaires in the mail designed to gather information about the extent of their exposure and reproductive outcome. They found that operating room personnel had an increased risk of spontaneous abortions and congenital abnormalities. They recommended that a means to scavenge trace anesthetic gases should be mandatory in all operating rooms (currently the standard). However, all these studies were later criticized for their lack of a control group, low response rate to questionnaires, recall bias, and statistical inaccuracies.15 An additional study with a different study design was unable to confirm these findings. Ericson and Kallen16 used a Swedish birth registry and compared delivery outcome in nurses who worked in the operating room with those who worked on internal medicine wards. Because this is a registry study and not a survey study, it is not subject to the same issues that affect survey studies, especially the problem with recall bias. The researchers were not able to find a difference in miscarriage, perinatal deaths, or malformations among the groups.

OUTCOME STUDIES IN WOMEN WHO HAD SURGERY WHILE PREGNANT

There have also been a number of retrospective studies of pregnant women who have undergone surgery to seek an association between anesthesia and surgery and congenital defects, spontaneous abortions, or fetal demise, and the results were remarkably similar. The largest study to date was performed by Mazze and Kallen.2 They linked the data from three Swedish health registries, the Medical Birth Registry, the Registry of Congenital malformations, and the Hospital Discharge registry for the 9-year period 1973-1981. They examined the data for four adverse outcomes: congenital defects, stillborn infants, infants born alive but who died within 7 days, and infants with birth weights less than 1500 g and less than 2500 g. They found 5405 women had undergone surgery during their pregnancy of a total of 720,000 pregnancies. In their data set, most procedures were performed during the first trimester (41.6%), and the incidence decreased during the second and third trimesters (34.8% and 23.5%, respectively). Many of the surgeries (54%) were performed with general anesthesia—almost all of them (more than 98%) with nitrous oxide. The researchers were not able to find an increase in congenital abnormalities or stillborn births among those who underwent surgery while pregnant during any trimester. However, the number of infants born with birth weights less than 1500 g and less than 2500 g, and the number of infants who died within 7 days of postnatal life was greater in those who underwent surgery while pregnant (Figure 12-1). This was true during all three trimesters. These risks could not be linked to either the specific anesthetic agents or the anesthetic technique. The increased risk to the fetus may be due to the condition that necessitated surgery in the first place, with the highest rate in gynecologic procedures. 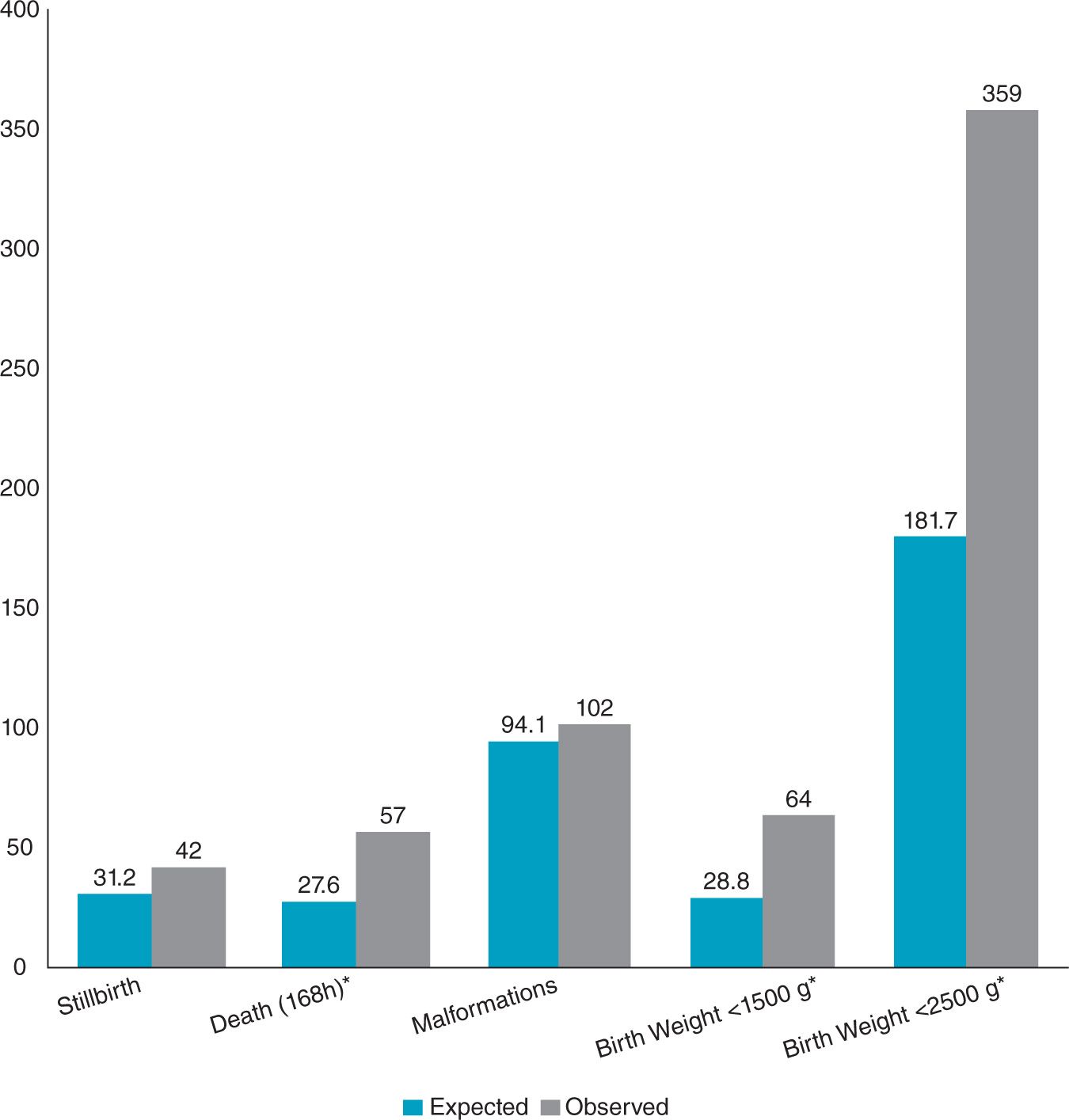 Figure 12-1. Total number of observed and expected outcomes among women having nonobstetric surgery during pregnancy. The incidence of infants of low or very low birth weight and infants who died within 168 hours were significantly increased. ∗P < .05. (Modified from Mazze RI, Källén B. Reproductive outcome after anesthesia and operation during pregnancy: a registry study of 5405 cases. Am J Obstet Gynecol. 1989;161:1178.)

Behavioral Teratology and Apoptosis in the Newborn Brain

It is well known that the halogenated agents, particularly halothane and enflurane, cause learning deficits in rodents.17 Most anesthetic agents act by either blocking N-methyl-d-aspartate receptors or by enhancing GABA. Studies have demonstrated that when agents that act by either of these mechanisms (eg, ketamine, nitrous oxide, midazolam, barbiturates, and volatile agents) are administered to the rodent during the period of synaptogenesis, they induce widespread neuronal apoptosis in the developing brain.18

Although an association between anesthetic agents and neuronal apoptosis has been demonstrated in animal models, extrapolation from animal studies to humans is problematic at best. Whereas most organ systems have completed development by the end of the first trimester or earlier, the brain continues to develop until after delivery. The time of greatest concern is during synaptogenesis or rapid growth spurt, which lasts from the third trimester until 3 years of age. Randomized trials to confirm apoptosis in the human brain obviously cannot be performed, and evaluating the anesthetic effect on the brain is complicated. Recently, two separate authors assessed the effect of anesthesia and surgery on behavior later in life—one learning disabilities19 and the other deviant behavior.20 Both found an association between surgery and anesthesia and their outcome measures. The studies are far from conclusive because they were not randomized, but the studies certainly highlight the need for well-controlled studies. At this point, it is premature to make any changes in anesthesia practice based on the data to date, and the FDA at an advisory committee meeting came to the same conclusion.21

The most important consideration for the fetus during nonobstetric surgery is the maintenance of a normal intrauterine physiologic milieu and avoidance of intrauterine fetal asphyxia. Fetal oxygenation is directly dependent on maternal arterial oxygen tension, oxygen carrying capacity, oxygen affinity, and uteroplacental perfusion. It is therefore critical to maintain a normal maternal PaO2, PaCO2, and uterine blood flow.