Anesthesia for Patients with Kidney Disease

Acute kidney injury (AKI) is a common problem, with an incidence of up to 5% in all hospitalized patients and up to 8% in critically ill patients. Postoperative AKI may occur in 1% or more of general surgery patients, and up to 30% of patients undergoing cardiothoracic and vascular procedures. Perioperative AKI greatly increases hospitalization costs, mortality rate, and perioperative morbidity, including fluid and electrolyte derangements, major cardiovascular events, infection and sepsis, and gastrointestinal hemorrhage. Preoperative risk factors for perioperative AKI include preexisting kidney disease, hypertension, diabetes mellitus, liver disease, sepsis, trauma, hypovolemia, multiple myeloma, and age greater than 55 years. The risk of perioperative AKI is also increased by exposure to nephrotoxic agents such as nonsteroidal antiinflammatory drugs (NSAIDs), radiocontrast agents, and antibiotics (see Table 29-4). When addressing abnormalities in renal function, the clinician must possess a thorough understanding of the differential diagnosis of AKI (Figure 30-1).

Renal impairment can be due to glomerular dysfunction, tubular dysfunction, or obstruction of the urinary tract. Because abnormalities of glomerular function cause the greatest derangements and are most readily detectable, the most useful laboratory tests utilized currently are those related to assessment of glomerular filtration rate (GFR). Accurate clinical assessment of renal function is often difficult and relies heavily on laboratory determinations such as the creatinine clearance (Table 30-1). Two systems for classification of AKI are helpful in defining and staging the degree of renal dysfunction; these are the Acute Dialysis Quality Initiative RIFLE criteria (Figure 30-2) and the Acute Kidney Injury Network (AKIN) staging system (Table 30-2). A great deal of research is currently evaluating plasma and urine biomarkers associated with AKI, such as cystatin C, neutrophil gelatinase-associated lipocalin, interleukin-18, and kidney injury molecule-1. It is likely that biomarkers will play a prominent role in the near future for diagnosis, staging, and prognostic assessment of AKI.

Table 30-1 Severity of Kidney Injury According to Glomerular Function.

Table 30-1 Severity of Kidney Injury According to Glomerular Function. 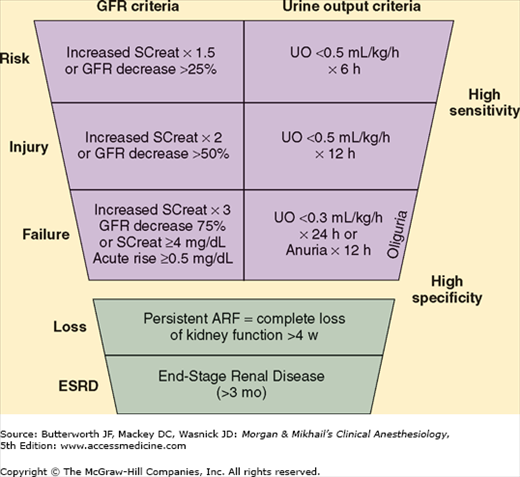 The primary source of urea in the body is the liver. During protein catabolism, ammonia is produced from the deamination of amino acids. Hepatic conversion of ammonia to urea prevents the buildup of toxic ammonia levels:

Blood urea nitrogen (BUN) is therefore directly related to protein catabolism and inversely related to glomerular filtration. As a result, BUN is not a reliable indicator of the GFR unless protein catabolism is normal and constant. Moreover, 40-50% of the urea filtrate is normally reabsorbed passively by the renal tubules; hypovolemia increases this fraction.

The normal BUN concentration is 10-20 mg/dL. Lower values can be seen with starvation or liver disease; elevations usually result from decreases in GFR or increases in protein catabolism. The latter may be due to a high catabolic state (trauma or sepsis), degradation of blood either in the gastrointestinal tract or in a large hematoma, or a high-protein diet. BUN concentrations greater than 50 mg/dL are generally associated with impairment of renal function.

Creatine is a product of muscle metabolism that is nonenzymatically converted to creatinine. Creatinine production in most people is relatively constant and related to muscle mass, averaging 20-25 mg/kg in men and 15-20 mg/kg in women. Creatinine is then filtered (and to a minor extent secreted) but not reabsorbed in the kidneys. Serum creatinine concentration is therefore directly related to body muscle mass but inversely related to glomerular filtration (Figure 30-3). Because body muscle mass is usually relatively constant, serum creatinine measurements are generally reliable indices of GFR in the healthy patient. 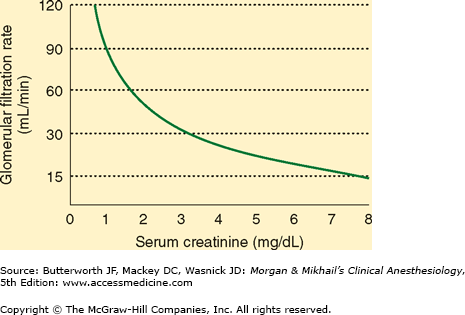 The relationship between the serum creatinine concentration and the glomerular filtration rate.

GFR declines with increasing age in most individuals (5% per decade after age 20), but because muscle mass also declines, the serum creatinine remains relatively normal; creatinine production may decrease to 10 mg/kg. Thus, in elderly patients, small increases in serum creatinine may represent large changes in GFR. Using age and lean body weight (in kilograms), GFR can be estimated by the following formula for men:

For women, this equation must be multiplied by 0.85 to compensate for a smaller muscle mass.

Progressive kidney disease enhances creatinine secretion in the proximal tubule. As a result, with declining renal function the creatinine clearance progressively overestimates the true GFR. Moreover, relative preservation of GFR may occur early in the course of progressive kidney disease due to compensatory hyperfiltration in the remaining nephrons and increases in glomerular filtration pressure. It is therefore important to look for other signs of deteriorating renal function such as hypertension, proteinuria, or other abnormalities in urine sediment.

Low renal tubular flow rates enhance urea reabsorption but do not affect creatinine handling. As a result, the BUN to serum creatinine ratio increases above 10:1. Decreases in tubular flow can be caused by decreased renal perfusion or obstruction of the urinary tract. BUN: creatinine ratios greater than 15:1 are therefore seen in volume depletion and in edematous disorders associated with decreased tubular flow (eg, congestive heart failure, cirrhosis, nephrotic syndrome) as well as in obstructive uropathies. Increases in protein catabolism can also increase this ratio.

Urinalysis continues to be routinely performed for evaluating renal function. Although its utility for that purpose is justifiably questionable, urinalysis can be helpful in identifying some disorders of renal tubular dysfunction as well as some nonrenal disturbances. A routine urinalysis typically includes pH; specific gravity; detection and quantification of glucose, protein, and bilirubin content; and microscopic examination of the urinary sediment. Urinary pH is helpful only when arterial pH is also known. A urinary pH greater than 7.0 in the presence of systemic acidosis is suggestive of renal tubular acidosis (see Chapter 50). Specific gravity is related to urinary osmolality; 1.010 usually corresponds to 290 mOsm/kg. A specific gravity greater than 1.018 after an overnight fast is indicative of adequate renal concentrating ability. A lower specific gravity in the presence of hyperosmolality in plasma is consistent with diabetes insipidus.

Glycosuria is the result of either a low tubular threshold for glucose (normally 180 mg/dL) or hyperglycemia. Proteinuria detected by routine urinalysis should be evaluated by means of 24-h urine collection. Urinary protein excretions greater than 150 mg/d are significant. Elevated levels of bilirubin in the urine are seen with biliary obstruction.

Microscopic analysis of the urinary sediment detects the presence of red or white blood cells, bacteria, casts, and crystals. Red cells may be indicative of bleeding due to tumor, stones, infection, coagulopathy, or trauma. White cells and bacteria are generally associated with infection. Disease processes at the level of the nephron produce tubular casts. Crystals may be indicative of abnormalities in oxalic acid, uric acid, or cystine metabolism.

Most drugs commonly employed during anesthesia (other than volatile anesthetics) are at least partly dependent on renal excretion for elimination. In the presence of renal impairment, dosage modifications may be required to prevent accumulation of the drug or its active metabolites. Moreover, the systemic effects of AKI can potentiate the pharmacological actions of many of these agents. This latter observation may be the result of decreased protein binding of the drug, greater brain penetration due to some breach of the blood-brain barrier, or a synergistic effect with the toxins retained in kidney failure.

The pharmacokinetics of both propofol and etomidate are minimally affected by impaired renal function. Decreased protein binding of etomidate in patients with hypoalbuminemia may enhance its pharmacological effects.

Patients with kidney disease often exhibit increased sensitivity to barbiturates during induction, even though pharmacokinetic profiles appear to be unchanged. The mechanism appears to be an increase in free circulating barbiturate as a result of decreased protein binding. Acidosis may also favor a more rapid entry of these agents into the brain by increasing the nonionized fraction of the drug (see Chapter 26).

Ketamine pharmacokinetics are minimally altered by kidney disease. Some active hepatic metabolites are dependent on renal excretion and can potentially accumulate in kidney failure.

Benzodiazepines undergo hepatic metabolism and conjugation prior to elimination in urine. Because most are highly protein bound, increased sensitivity may be seen in patients with hypoalbuminemia. Diazepam and midazolam should be administered cautiously in the presence of renal impairment because of a potential for the accumulation of active metabolites.

Most opioids currently in use in anesthetic management (morphine, meperidine, fentanyl, sufentanil, and alfentanil) are inactivated by the liver; some of these metabolites are then excreted in urine. Remifentanil pharmacokinetics are unaffected by renal function due to rapid ester hydrolysis in blood. With the exception of morphine and meperidine, significant accumulation of active metabolites generally does not occur with these agents.

The accumulation of morphine (morphine-6-glucuronide) and meperidine (normeperidine) metabolites has been reported to prolong respiratory depression in patients with kidney failure, and increased levels of normeperidine has been associated with seizures. The pharmacokinetics of the most commonly used opioid agonist-antagonists (butorphanol, nalbuphine, and buprenorphine) are unaffected by kidney failure.

In doses used for premedication, atropine and glycopyrrolate can generally be used safely in patients with renal impairment. Because up to 50% of these drugs and their active metabolites are normally excreted in urine, however, the potential for accumulation exists following repeated doses. Scopolamine is less dependent on renal excretion, but its central nervous system effects can be enhanced by the physiological alterations of renal insufficiency.

Most phenothiazines, such as promethazine, are metabolized to inactive compounds by the liver. Droperidol may be partly dependent on the kidneys for excretion. Although their pharmacokinetic profiles are not appreciably altered by renal impairment, potentiation of the central depressant effects of phenothiazines by the physiological milieu of renal insufficiency can occur.

Volatile anesthetic agents are ideal for patients with kidney disease because of lack of dependence on the kidneys for elimination, ability to control blood pressure, and minimal direct effects on renal blood flow. Although patients with mild to moderate renal impairment do not exhibit altered uptake or distribution, accelerated induction and emergence may be seen in severely anemic patients (hemoglobin <5 g/dL) with chronic kidney failure; this observation may be explained by a decrease in the blood:gas partition coefficient or by a decrease in minimum alveolar concentration. Some clinicians avoid sevoflurane (with <2 L/min gas flows) for patients with kidney disease who undergo lengthy procedures (see Chapters 8 and 29).