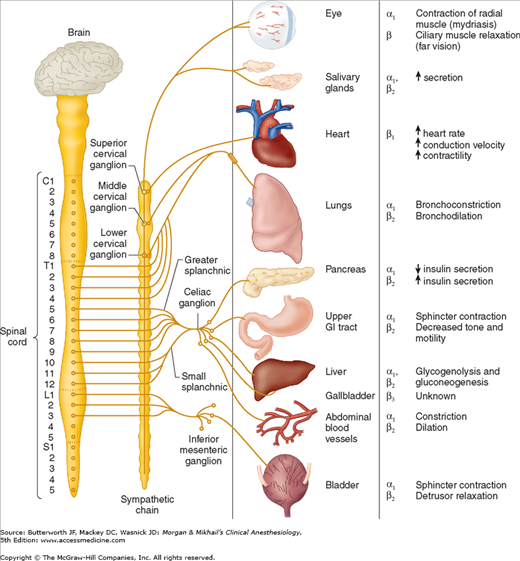 Norepinephrine is synthesized in the cytoplasm of sympathetic postganglionic nerve endings and stored in the vesicles (Figure 14-2). After release by a process of exocytosis, the action of norepinephrine is primarily terminated by reuptake into the postganglionic nerve ending (inhibited by tricyclic antidepressants), but also by diffusion from receptor sites, or via metabolism by monoamine oxidase (inhibited by monoamine oxidase inhibitors) and catechol-O-methyltransferase (Figure 14-3). Prolonged adrenergic activation leads to desensitization and hyporesponsiveness to further stimulation. 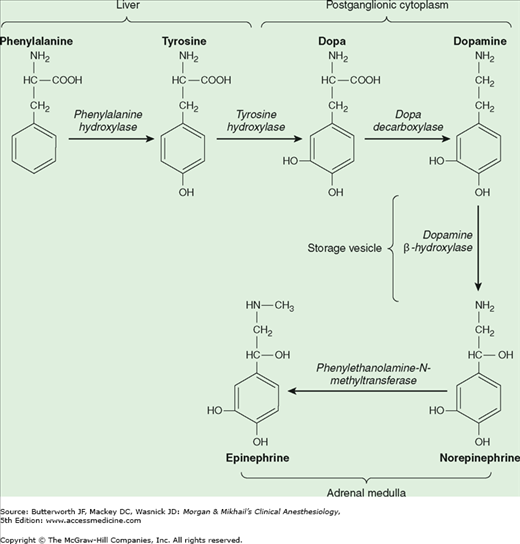 The synthesis of norepinephrine. Hydroxylation of tyrosine to dopa is the rate-limiting step. Dopamine is actively transported into storage vesicles. Norepinephrine can be converted to epinephrine in the adrenal medulla. 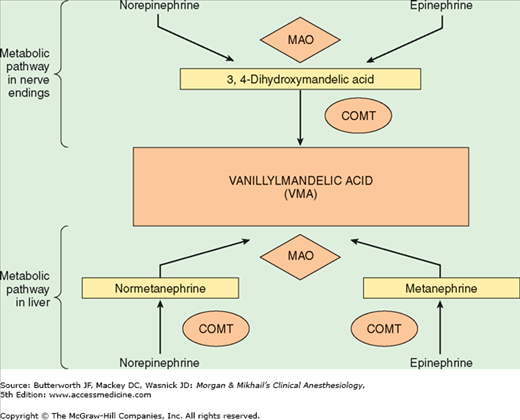 Adrenergic receptors are divided into two general categories: α and β. Each of these has been further subdivided into at least two subtypes: α1 and α2, and β1, β2, and β3. The α-receptors have been further divided using molecular cloning techniques into α1A, α1B, α1D, α2A, α2B, and α2C. These receptors are linked to G proteins (Figure 14-4; Drs. Rodbell and Gilman received the Nobel Prize in physiology or medicine in 1994 for their discovery)—heterotrimeric receptors with α, β, and γ subunits. The different adrenoceptors are linked to specific G proteins, each with a unique effector, but each using guanosine triphosphate (GTP) as a cofactor. α1 is linked to Gq, which activates phospholipases; α2 is linked to Gi, which inhibits adenylate cyclase, and β is linked to Gs, which activates adenylate cyclase. 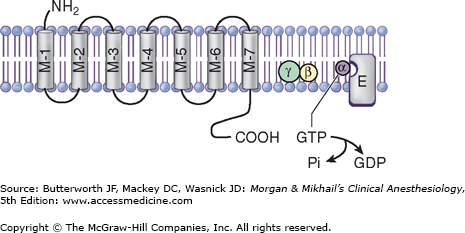 The adrenoceptor is a transmembrane-spanning receptor made up of seven subunits, which is linked to a G protein. G proteins are trimeric endoplasmic membrane proteins made of α, β, and γ units. With activation, GTP on the α-subunit is replaced by GDP, stimulating a conformational change, disassociating the α, β, and γ units. Either the Gα or Gβγ subunits can activate (or inhibit) the enzyme effector for that adrenoceptor. M1-M7, membrane-spanning units; α, β, γ, subunits of G protein; GTP, guanosine triphosphate; Pi, inorganic phosphate—quickly assimilated; GDP, guanosine diphosphate; E, effector; cyclophosphatase for Gq, adenylate cyclase for Gi, and Gs.

α1-Receptors are postsynaptic adrenoceptors located in smooth muscle throughout the body (in the eye, lung, blood vessels, uterus, gut, and genitourinary system). Activation of these receptors increases intracellular calcium ion concentration, which leads to contraction of smooth muscles. Thus, α1-agonists are associated with mydriasis (pupillary dilation due to contraction of the radial eye muscles), bronchoconstriction, vasoconstriction, uterine contraction, and constriction of sphincters in the gastrointestinal and genitourinary tracts. α1-stimulation also inhibits insulin secretion and lipolysis. The myocardium possesses α1-receptors that have a positive inotropic effect, which might play a role in catecholamine-induced arrhythmia. During myocardial ischemia, enhanced α1-receptor coupling with agonists is observed. Nonetheless, the most important cardiovascular effect of α1-stimulation is vasoconstriction, which increases peripheral vascular resistance, left ventricular afterload, and arterial blood pressure.

β2-Receptors are primarily postsynaptic adrenoceptors located in smooth muscle and gland cells. They share a common mechanism of action with β1-receptors: adenylate cyclase activation. Despite this commonality, β2 stimulation relaxes smooth muscle, resulting in bronchodilation, vasodilation, and relaxation of the uterus (tocolysis), bladder, and gut. Glycogenolysis, lipolysis, gluconeogenesis, and insulin release are stimulated by β2-receptor activation. β2-agonists also activate the sodium-potassium pump, which drives potassium intracellularly and can induce hypokalemia and dysrhythmias.

β3-Receptors are found in the gallbladder and brain adipose tissue. Their role in gallbladder physiology is unknown, but they are thought to play a role in lipolysis and thermogenesis in brown fat.

Dopamine (DA) receptors are a group of adrenergic receptors that are activated by dopamine; these receptors are classified as D1 and D2 receptors. Activation of D1 receptors mediates vasodilation in the kidney, intestine, and heart. D2 receptors are believed to play a role in the antiemetic action of droperidol.

Adrenergic agonists interact with varying specificity (selectivity) at α- and β-adrenoceptors (Tables 14-1 and 14-2).

Overlapping of activity complicates the prediction of clinical effects. For example, epinephrine stimulates α1-, α2-, β1-, and β2-adrenoceptors. Its net effect on arterial blood pressure depends on the balance between α1-vasoconstriction, α2– and β2-vasodilation, and β1-inotropic influences. Moreover, this balance changes at different doses.

Adrenergic agonists can be categorized as direct or indirect. Direct agonists bind to the receptor, whereas indirect agonists increase endogenous neurotransmitter activity. Mechanisms of indirect action include increased release or decreased reuptake of norepinephrine. The differentiation between direct and indirect mechanisms of action is particularly important in patients who have abnormal endogenous norepinephrine stores, as may occur with use of some antihypertensive medications or monoamine oxidase inhibitors. Intraoperative hypotension in these patients should be treated with direct agonists, as their response to indirect agonists will be altered.

Another feature distinguishing adrenergic agonists from each other is their chemical structure. Adrenergic agonists that have a 3,4-dihydroxybenzene structure (Figure 14-5) are known as catecholamines. These drugs are typically short-acting because of their metabolism by monoamine oxidase and catechol-O-methyltransferase. Patients taking monoamine oxidase inhibitors or tricyclic antidepressants may therefore demonstrate an exaggerated response to catecholamines. The naturally occurring catecholamines are epinephrine, norepinephrine, and DA. Changing the side-chain structure (R1, R2, R3) of naturally occurring catecholamines has led to the development of synthetic catecholamines (eg, isoproterenol and dobutamine), which tend to be more receptor specific.

Adrenergic agonists that have a 3,4-dihydroxybenzene structure are known as catecholamines. Substitutions at the R1, R2