FIGURE 8.1 The basic features of a pulmonary artery (PA) catheter. Note that the PA catheter has been threaded through a large-bore introducer catheter that has a side-arm infusion port.

1. The superior vena cava pressure is identified by a venous pressure waveform, which appears as small amplitude oscillations. This pressure remains unchanged after the catheter tip is advanced into the right atrium.

On occasion, the pulsatile pressure in the pulmonary arteries never disappears despite advancing the catheter maximally (unexplained observation). If this occurs, the pulmonary artery diastolic pressure can be used as a surrogate measure of the wedge pressure (the two pressures should be equivalent in the absence of pulmonary hypertension). 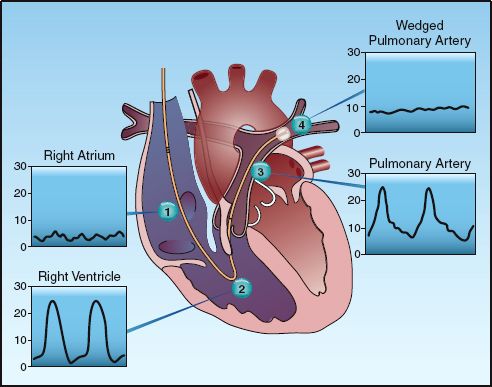 FIGURE 8.2 The pressure waveforms at different points along the normal course of a pulmonary artery catheter. These waveforms are used to identify the location of the catheter tip as it is advanced.

Principle of the Wedge Pressure 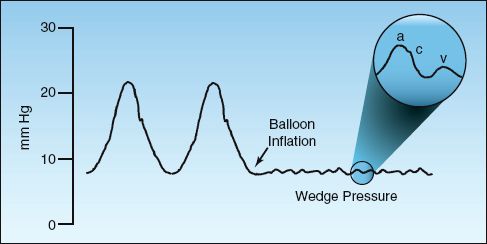 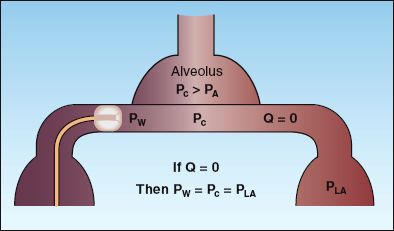 Therefore the wedge pressure and capillary hydrostatic pressure must be different to create a pressure gradient for venous flow to the left side of the heart. The magnitude of this difference is unclear because it is not possible to determine RV. However, the discrepancy between wedge and capillary hydrostatic pressures may be magnified in ICU patients because conditions that promote pulmonary venoconstriction (i.e., increase RV), such as hypoxemia, endotoxemia, and the acute respiratory distress syndrome (11,12), are common in these patients.

The ability to measure cardiac output increases the monitoring capacity of the PA catheter from 2 parameters (i.e., central venous pressure and wedge pressure) to at least 10 parameters (see Tables 8.1 and 8.2), and allows a physiologic evaluation of cardiac performance and systemic oxygen transport. 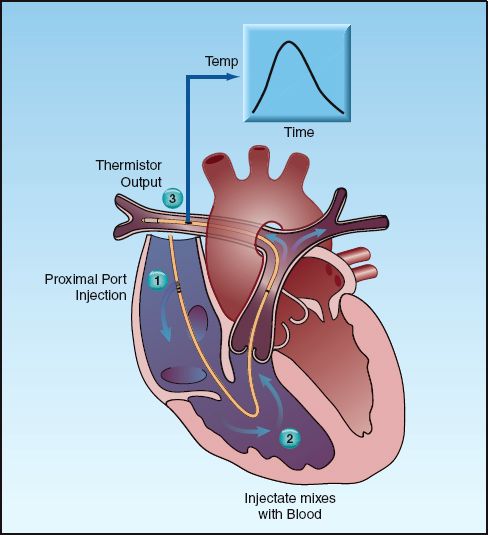 The indicator-dilution method of measuring blood flow is based on the premise that, when an indicator substance is added to circulating blood, the rate of blood flow is inversely proportional to the change in concentration of the indicator over time. If the indicator is a temperature, the method is known as thermodilution.

The thermodilution method is illustrated in Figure 8.5. A dextrose or saline solution that is colder than blood is injected through the proximal port of the catheter in the right atrium. The cold fluid mixes with blood in the right heart chambers, and the cooled blood is ejected into the pulmonary artery and flows past the thermistor on the distal end of the catheter. The thermistor records the change in blood temperature with time; the area under this curve is inversely proportional to the flow rate in the pulmonary artery, which is equivalent to the cardiac output in the absence of intracardiac shunts. Electronic monitors integrate the area under the temperature–time curves and provide a digital display of the calculated cardiac output.

Regurgitant flow across the tricuspid valve can be common during positive-pressure mechanical ventilation. The regurgitant flow causes the indicator fluid to be recycled, producing a prolonged, low-amplitude thermodilution curve similar to the one in the bottom frame of Figure 8.6. This results in a falsely low cardiac output measurement (16). 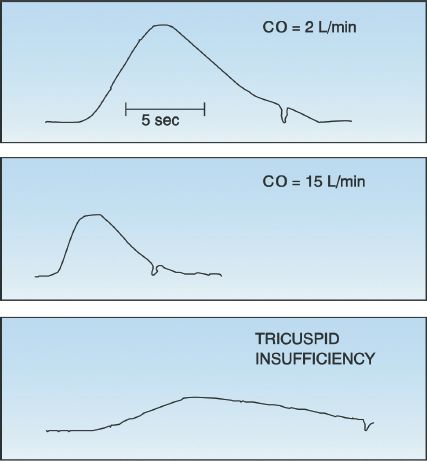 The PA catheter provides a wealth of information on cardiovascular function and systemic oxygen transport. This section provides a brief de-scription of the hemodynamic parameters that can be measured or de-rived with the PA catheter. These parameters are included in Table 8.1.

Hemodynamic parameters are often expressed in relation to body size, and the popular measure of body size for hemodynamic measurements is the body surface area (BSA), which can be determined with the following simple equation (17). 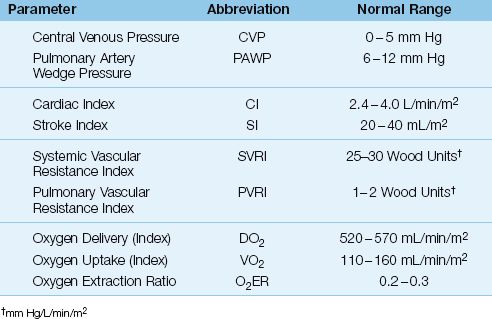 The following parameters are used to evaluate cardiac performance and mean arterial pressure. The normal ranges for these parameters are in-cluded in Table 8.1. Parameters that are adjusted for body surface area are identified by the term index.

The CVP is used as a measure of the right ventricular filling pressure. The normal range for the CVP is 0–5 mm Hg, and it can be a negative pressure in the sitting position. The CVP is a popular measurement in critical care, and is described in more detail in the next chapter.

The pulmonary artery wedge pressure (PAWP) is described earlier in the chapter. The PAWP is a measure of left-atrial pressure (LAP), which is equivalent to the left-ventricular end-diastolic pressure (LVEDP) when mitral valve function is normal.

The wedge pressure is a measure of the left ventricular filling pressure. It is slightly higher than the CVP (to keep the foramen ovale closed), and the normal range is 6–12 mm Hg.

The thermodilution cardiac output (CO) is the average stroke output of the heart in one-minute periods. It is typically adjusted to body surface area (BSA), and is called the cardiac index (CI).

In the average-sized adult, the cardiac index is about 60% of the cardiac output, and the normal range is 2.4–4 L/min/m2.

The stroke index is a measure of the systolic performance of the heart during one cardiac cycle. The normal range in adults is 20–40 mL/m2.

The hydraulic resistance in the systemic circulation is not a measurable quantity for a variety of reasons (e.g., resistance is flow-dependent and varies in different regions). Instead, the systemic vascular resistance (SVR) is a global measure of the relationship between systemic pressure and flow. The SVR is directly related to the pressure drop from the aorta to the right atrium (MAP – CVP), and inversely related to the cardiac output (CI).

The SVRI is expressed in Wood units (mm Hg/L/min/m2), which can be multiplied by 80 to obtain more conventional units of resistance (dynes•sec–1•cm-5/m2), but this conversion offers no advantage (18).

Like the SVRI, the PVRI is expressed in Wood units (mm Hg/L/min/m2), which can be multiplied by 80 to obtain more conventional units of resistance (dynes•sec-1•cm–5/m2).

The oxygen transport parameters provide a global (whole body) measure of oxygen supply and oxygen consumption. These parameters are de-scribed in detail in Chapter 10 and are presented only briefly here.

The O2 concentration in arterial blood (CaO2) is a function of the hemoglobin concentration (Hb) and the percent saturation of hemoglobin with oxygen (SaO2): CaO2 = 1.3 × Hb × SaO2. Therefore, the DO2 equation can be rewritten as:

DO2 is expressed as mL/min/m2 (if the cardiac index is used instead of the cardiac output), and the normal range is shown in Table 8.1.

Oxygen uptake (VO2), also called oxygen consumption, is the rate at which oxygen is taken up from the systemic capillaries into the tissues. The VO2 is calculated as the product of the cardiac output (or CI) and the difference in oxygen concentration between arterial and venous blood (CaO2 – CvO2). The venous blood in this instance is “mixed” venous blood in the pulmonary artery.

If the CaO2 and CvO2 are each broken down into their component parts, the VO2 equation can be rewritten as:

(where SaO2 and SvO2 are the oxyhemoglobin saturations in arterial and mixed venous blood, respectively). VO2 is expressed as mL/min/m2 (when the cardiac index is used instead of the cardiac output), and the normal range is shown in Table 8.1. An abnormally low VO2 (<100 mL/min/m2) is evidence of impaired aerobic metabolism.

The oxygen extraction ratio (O2ER) is the fractional uptake of oxygen from the systemic microcirculation, and is equivalent to the ratio of O2 uptake to O2 delivery. Multiplying the ratio by 100 expresses it as a percent.

The O2ER is a measure of the balance between O2 delivery and O2 uptake. It is normally about 25%, which means that 25% of the oxygen delivered to the systemic capillaries is taken up into the tissues.

Most hemodynamic problems can be identified by noting the pattern of changes in three hemodynamic parameters: cardiac filling pressure (CVP or PAWP), cardiac output, and systemic or pulmonary vascular resistance. This is demonstrated in Table 8.2 using the three classic forms of shock: hypovolemic, cardiogenic, and vasogenic. Each of these conditions produces a distinct pattern of changes in the three parameters. Since there are 3 parameters and 3 possible conditions (low, normal, or high), there are 33 or 27 possible hemodynamic patterns, each representing a distinct hemodynamic condition.

The hemodynamic patterns just described can identify a hemodynamic problem, but they provide no information about the impact of the problem on tissue oxygenation. The addition of the oxygen uptake (VO2) will correct this shortcoming, and can help identify a state of clinical shock. Clinical shock can be defined as a condition where tissue oxygenation is inadequate for the needs of aerobic metabolism. Since a VO2 that is below normal can be used as indirect evidence of oxygen-limited aerobic metabolism, a subnormal VO2 can be used as indirect evidence of clinical shock. The following example shows how the VO2 can add to the evaluation of a patient with cardiac pump failure.

Despite the wealth of physiologically relevant information provided by the PA catheter, the catheter has been vilified and almost abandoned in recent years because clinical studies have shown added risk with little or no survival benefit, associated with use of the catheter (2–4). The following points are made in support of the PA catheter.

1. First and foremost, the PA catheter is a monitoring device, not a therapy. If a PA catheter is placed to evaluate a problem and it uncovers a disorder that is untreatable (e.g., cardiogenic shock), the problem is not the catheter, but a lack of effective therapy. Clinical outcomes should be used to evaluate therapies, not measurements.

2. In addition, surveys indicate that physicians often don’t understand the measurements provided by PA catheters (19,20). Any tool can be a weapon in the wrong hands.

3. Finally, the incessant use of mortality rates to evaluate critical care interventions is problematic because the presumption that every intervention has to save lives to be of value is flawed. Interventions should (and do) have more specific and immediate goals other than life or death. In the case of a monitoring device, the goal is to provide clinical information, and the PA catheter achieves this goal with distinction.

17. Mattar JA. A simple calculation to estimate body surface area in adults and its correlation with the Dubois formula. Crit Care Med 1989; 846–847.