Throughout pregnancy, vaginal bleeding can cause adverse maternal, fetal, and neonatal outcomes. Although vaginal bleeding is more common in early pregnancy, during the latter half it complicates approximately 5% of pregnancies. The major causes of antepartum bleeding include “bloody show” associated with labor or cervical insufficiency, placental abruption (30%), placenta previa (20%), uterine rupture, and vasa previa (<0.5%; Clark, 2004).

Vaginal bleeding is a common presenting complaint to emergency departments, and especially to an obstetric triage unit. Expeditious and thorough evaluation of vaginal bleeding during pregnancy in the acute setting is crucial to overall maternal and fetal well-being. This review will focus on the major causes of vaginal bleeding in the second and third trimester, specifically beyond viability (gestational age of at least 23 weeks 0 days), as well as the approach to diagnosis and management.

The same history is obtained for any woman presenting with second- or third-trimester bleeding. This includes specific focus on the current pregnancy, and particular focus on any risk factors that point to abruption or abnormal placentation. Questions to consider include: how much bleeding has occurred, is there a prior ultrasound or diagnosis to account for bleeding, has there been any recent sexual intercourse, and is the woman experiencing symptoms of significant blood loss such as lightheadedness. The prenatal record can be reviewed for blood type and Rh status (for Rh immune globulin, as needed), hemoglobin and/or hematocrit, and all ultrasound findings with focus on placental location. The amount of blood loss prior to presentation can be estimated by a pad count, as well as the amount and size of clots. Prior episodes of bleeding and hospitalization need to be elicited and noted. Evaluation of pain includes a description of quality, onset, location, severity, and radiation, as well as understanding the relationship between onset of pain and bleeding.

Placental abruption, decidual hemorrhage leading to the premature separation of the placenta from the uterine wall, most often due to rupture of maternal vessels prior to delivery of the fetus, complicates 1% of pregnancies 220(Oyelese & Ananth, 2006). Placental abruption can place the mother and fetus at significant risk for poor outcomes, as shown in Exhibit 20.1. The hematoma that results can be small and self-limited, or may be larger and continue to expand. The hematoma functions to limit the exchange of gases and nutrients to the fetus; therefore, the risks to the fetus are dependent upon the severity of abruption and gestational age at delivery.

Source: Adapted from Oyelese and Ananth (2006).

Classically, pregnant women with placental abruption will present with vaginal bleeding and abdominal pain. The vaginal bleeding can be acute and heavy, or it can be chronic with intermittent acute episodes of bleeding. Often, pregnant women will have vague complaints of spotting, mild abdominal pain/cramping, and/or back pain. Less than 5% of abruptions will present with leaking of fluid in addition to vaginal bleeding (Ananth, Oyelese, Yeo, Pradhan, & Vintzileos, 2005). Women can present with simply pain and no bleeding in the setting of a concealed abruption. In rare circumstances, a patient can have such a large concealed abruption that he or she presents with mental status changes due to acute anemia. Concealed abruptions comprise approximately 10% to 20% of all placental abruptions (Oyelese & Ananth, 2006). Some women present for evaluation due to concerns surrounding an injury; for example, fall, motor vehicle accident, or physical assault. Symptoms of abruption may evolve during the period of monitoring for these injuries. Risk factors for placental abruption are outlined in Exhibit 20.2.

Pallor, hypotension, mental status changes, and/or tachycardia may be indicative of orthostatic changes and a severe hemorrhage, and must prompt an 221expeditious, focused physical examination. If ultrasound records are easily located, confirmation of placental location is noted prior to performing a digital examination. If not available, bedside ultrasound can be performed to assess for placenta previa. Careful abdominal examination is done to assess uterine tone, as a large abruption may present with a firm uterus, contracted with increased tone. The pelvic exam includes visualization of external genitalia, noting lesions, lacerations, masses, or hematoma. On speculum examination, the volume of blood in the vaginal vault is quantified and the cervical os visualized to determine dilatation and presence of active bleeding, as well as polyps or cervicitis. The amount of vaginal bleeding has not been shown to correlate well with the degree of placental separation (Clark, 2004). Therefore, it is not recommended to base potential maternal and fetal outcome on bleeding alone. If bleeding is light, continuation of the examination will include a wet mount to rule out bacterial vaginosis, trichomoniasis, and candidiasis as possible causes of vaginal bleeding.

Continuous external fetal monitoring is necessary with vaginal bleeding in any pregnancy beyond viability. Contractions in the setting of an abruption are classically high frequency and low in amplitude. Tachysystole, defined as more than five contractions in 10 minutes averaged over a 30-minute period, or an elevated resting uterine tone may be seen if an abruption is in progress. An abnormal uterine contraction pattern can point to a diagnosis of a concealed abruption in the women with severe abdominal pain and absent to mild vaginal bleeding.

In the setting of vaginal bleeding, immediate assessment of blood type, antibody screen, and a complete blood count (CBC) are performed. A urine drug screen may be indicated, as cocaine is a risk factor. When there is concern for hemorrhage or disseminated intravascular coagulopathy (DIC), coagulation studies can 222be obtained, including prothrombin time (PT), partial thrombin time (PTT), International Normalized Ratio (INR), and fibrinogen. Kleihauer–Betke (KB) can be ordered for pregnant women who are Rh(D) immune globulin negative. Obtaining a KB has shown to be unhelpful in diagnosis and management, as the test results do not correlate either with the diagnosis, or neonatal outcomes (Oyelese & Ananth, 2006). However, a KB can be useful in determining the correct dose of Rh immune globulin. 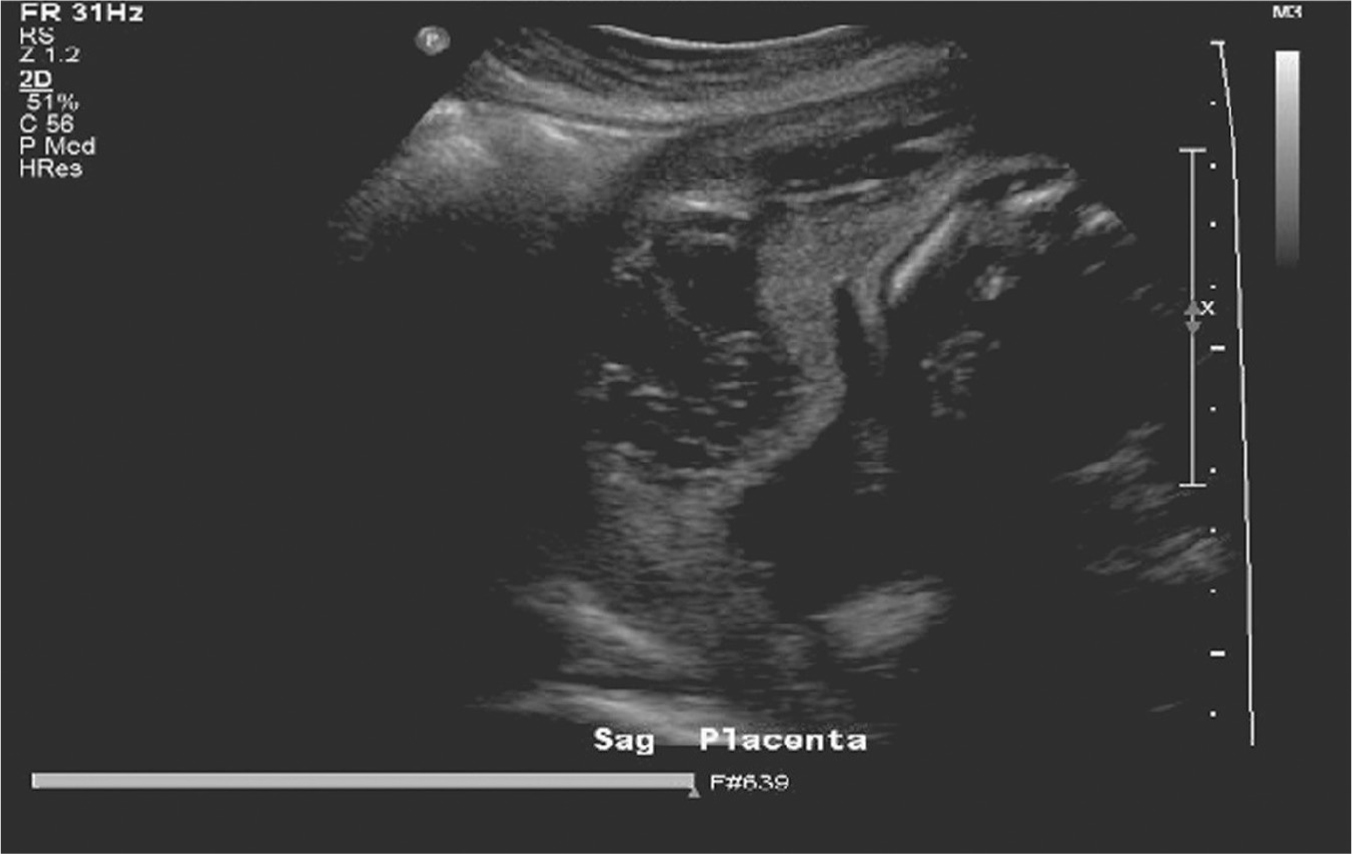 If the patient or fetus are unstable, a bedside ultrasound can be utilized, whereas a more complete or formal ultrasound can be pursued if required. Although ultrasound for abruption has a low sensitivity, when noted, it is highly predictive of abruption (Oyelese et al., 2004). Ultrasound has shown to have a 100% positive predictive value when a retroplacental hematoma was noted; however, only 25% of cases have these findings (Glantz & Purnell, 2002). Figure 20.1 shows the irregular, heterogeneous area behind the placenta consistent with a placental abruption (retroplacental hematoma). Ultrasound can provide additional valuable information, including placental location, fetal presentation, fetal biometry, and assessment of amniotic fluid. This information may be integral in adding data to the management plan.

The differential diagnosis of vaginal bleeding after viability can be divided into obstetric and nonobstetric causes. Exhibit 20.3 notes nonobstetric causes only. The leading causes of vaginal bleeding in pregnancy include placenta previa, 223abruptio placenta, preterm labor, cervical insufficiency, placenta accreta, vasa previa, and uterine rupture. Urinary and rectal sources of bleeding must be considered in women presenting to an emergency setting with the complaint of vaginal bleeding. The differential diagnosis includes urinary tract infections, nephrolithiasis, hemorrhoids, and rectal fissures.