The Story of Artificial Ventilation

From the 1850s to the 1940s, more than 70 different manual methods of artificial ventilation were described. These expanded the lungs by lifting the upper limbs, thus stretching the muscles attached to the chest wall. Compressing the thorax or abdomen then caused deflation. Although rarely successful, these techniques became sacrosanct. Attempts to introduce EAR to police and rescue organisations in the early 1960s met enormous opposition, despite demonstrating superior results. Surprisingly, some opposition came from distinguished scientists.
Between 1930–1950, several investigators compared the effectiveness of various manual techniques in apnoeic subjects, including those with drug overdose and anaesthesia, and even in warm corpses without rigor mortis [5]. These studies demonstrated that some manual methods were effective and The Council on Physical Medicine and Rehabilitation then recommended adoption of the Swedish Holger Nielson technique [6]. This seemed to be the last word, but nothing in science stays still.

In all these studies, a tracheal tube maintained the airway, permitting direct measurement of the volume of air moved. But, as James Elam (Fig. 56.2) an anaesthesiologist from Buffalo observed, tracheal intubation invalidated the results [7]. Why? Because with loss of consciousness, the tongue falls back obstructing the airway while the tube prevents the obstruction! Elam then showed that EAR performed by individuals taught to maintain a clear airway without a tracheal tube, could provide normal levels of oxygen and carbon dioxide in an apnoeic victim for prolonged periods [8,9]. 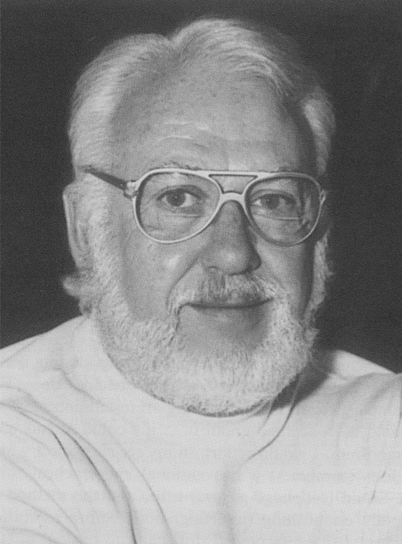 James O Elam (1918–1995), the innovative but controversial anaesthesiologist from Buffalo who had a contract with the US Army to study methods of resuscitating victims of nerve gas poisoning, and who subsequently led the campaign to re-instate expired air resuscitation. (From [7])
In 1954, Elam met Baltimore anaesthesiologist Peter Safar at a mid-west meeting. Safar gave Elam a lift back to Baltimore. During the journey, Elam persuaded Safar to join the crusade to convince the establishment that EAR provided optimum rescue ventilation for apnoeic subjects. The key to success was Safar’s demonstration that the tongue obstructed the airway in the unconscious patient, and that thrusting the jaw forwards and tilting the head backwards, a technique that anaesthesiologists use routinely, opened the airway [10]. Safar next conducted several daring studies on anaesthetized-paralysed human volunteers who were not intubated, demonstrating that after a brief period of training, firemen, boy scouts, and almost anyone could establish a clear airway and provide effective ventilation (Fig. 56.3) [11]. Another anaesthesiologist, Archer Gordon of the University of Illinois, who had conducted many studies on techniques of artificial ventilation and who had been a strong advocate of manual methods, also became convinced that expired air resuscitation was the technique of choice, and produced incontrovertible evidence that the method worked in both children and adults [12]. Two years later, Kouvenhoven, Jude and Knickerbocker dramatically demonstrated that compressing the chest could produce effective artificial circulation after a cardiac arrest’completing the triad of Airway, Breathing and Cardiac compression (A, B, C) that was the basis for the emergency treatment of cardiac arrest for the next half-century [13,14]. Although cardiac compression produces some ventilation, the American Heart Association still recommends that there should be 2 breaths to 30 heart compressions. However, it is now recognised that the reluctance of bystanders to perform EAR reduces survival, and that survival rates with some types of cardiac arrest are probably increased if cardiac compression is used as the primary treatment [15]. 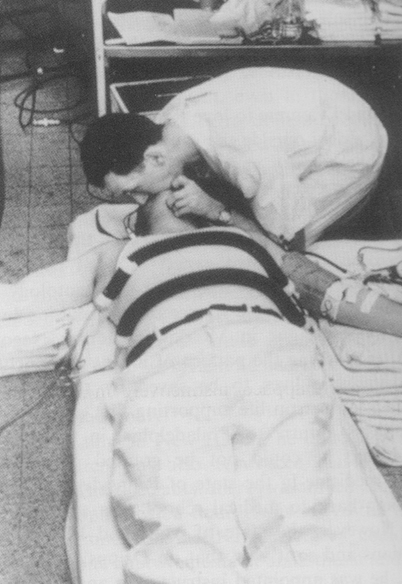 Peter Safar (1924–2003) performing expired air resuscitation during one of his studies on anaesthetized, paralysed volunteers in 1957. Tidal volume was derived from the change in pressure within the two corrugated tubes surrounding the chest. (Photo donated to the author by Safar in 1976)

In the nineteenth century several attempts were made to inflate the lungs by reducing the pressure surrounding the chest. A Woillez in France was among the first to describe an effective negative pressure ventilator in 1876 [16,17]. His “spirophore”, consisted of a metal chamber surrounding the patient’s body, the head protruding through a rubber collar that provided an airtight seal at the neck (Fig. 56.4). Moving a lever connected to a flexible diaphragm that sealed the foot end of the box expanded the patient’s lungs. Opposite movement of the lever allowed deflation. His device had problems: an ineffective neck seal; inadequate decreases in chamber pressure; and reliance on manual power. Drinker and McKhann in Boston Massachusetts, solved these problems in 1929, with a machine powered by vacuum pumps (Fig. 65.​9) [18]. However, Drinker’s machines cost about $3,000, a lot of money in those days. In 1931, John (“Jack”) Emerson, an engineer working in Boston, manufactured a similar, but more efficient, machine from standard plumbing, electrical and automotive parts; that cost about $1,000 [19]. Drinker sued Emerson, charging patent infringement, but Emerson fought back, showing that the principle had been described previously. After Harvard University intervened, Emerson was allowed to continue production. He made incremental improvements for the next 25 years and travelled country-wide for months at a time, with demonstration models in a motor home trailer. 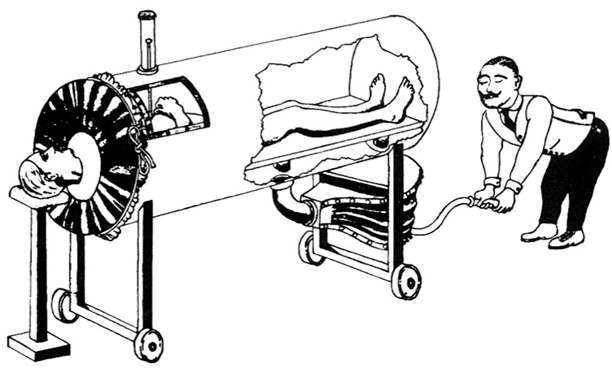 The Woillez spirophore (1876). This drawing was made by one of Emerson’s assistants in the 1930s to illustrate that the principle of the iron lung had been described long before Drinker had patented his device. (From The evolution of iron lungs. JH Emerson Company, 1957. Wood Library-Museum of Anesthesiology, Park Ridge, IL)
Over the next thirty years these “iron lung” ventilators saved many lives during the poliomyelitis epidemics that repeatedly scourged the world (Fig. 56.5). Some patients (like Emerson himself) had only a transient paralysis, but in others a permanent paralysis meant a lifetime in the iron lung [20]. Cost limited availability of these machines. Only the huge popular support for the “March of Dimes Fund” enabled purchase of enough machines to cope with the epidemics of polio that recurred in the US until the Salk and Sabine vaccines were introduced in the late 1950s. 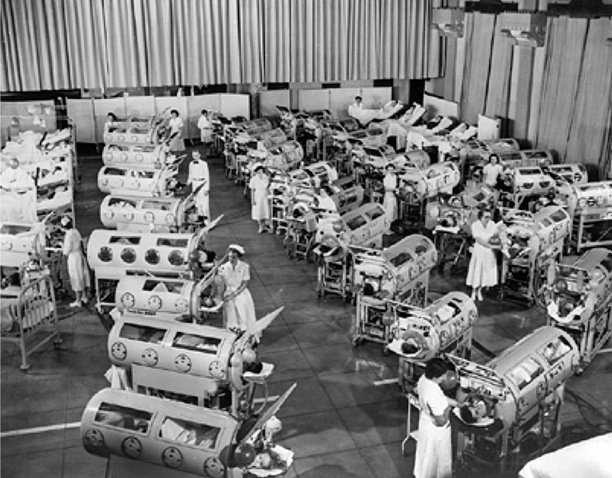 Patients in Iron lungs at Rancho Los Alamos Hospital, Downey, California during a polio epidemic in 1953

The Iron Lung in England: Morris and Macintosh

In 1930, a Drinker iron lung was imported into England. Similar machines were constructed under license. Attempts were also made to support breathing with a cuirass respirator. This generated intermittent negative pressures beneath a shell applied over the chest and upper abdomen, but achievement of an airtight seal was difficult and it was less effective than the tank ventilator.
In 1938 there was another severe epidemic of poliomyelitis in England. William Morris (later Lord Nuffield), a bicycle maker who developed the Morris Motor Company and who had made many philanthropic gifts to medicine, was concerned about the shortage of equipment and turned to his friend Robert Macintosh for advice. Macintosh, a New Zealander who had served in the British air force in World War I, been shot down and taken prisoner, and made remarkable escapes from various prisoner-of-war camps in Germany [21]. After training in medicine at Guy’s Hospital, London, Macintosh began training in surgery. To pay for his studies, he gave nitrous oxide (“laughing gas”) anaesthetics for teeth extractions in dental surgeries. His skill resulted in a lucrative Harley Street private practice. Shortly after the new intravenous agent Evipan (hexobarbital) had been introduced, Macintosh administered it to Nuffield. The experience was markedly different to the dreaming and struggling that characterised the “laughing gas” anaesthetics that Nuffield had suffered for removal of teeth in his youth. Thus began a friendship that influenced the course of anaesthesia in England and the world.
Macintosh and other doctors from Guy’s Hospital played golf at Nuffield’s club near Oxford. Nuffield sought their advice when considering his many medical benefactions. In 1936, he said he would finance the creation of a Postgraduate Medical School at Oxford, and that he had earmarked funds to provide chairs in Medicine, Surgery and Obstetrics and Gynaecology. Macintosh jested: “I see that anaesthetics has been left out again”. Saying nothing, Nuffield then added a Chair in Anaesthetics to his benefaction. The University resisted this addition because anaesthetics was not considered to be an academic subject. Nuffield responded: no anaesthetics, no benefaction. In 1937, Macintosh was appointed to the Nuffield Chair of Anaesthetics at Oxford, the first such Chair in the Commonwealth, and the second in the World.1
There were only 6 iron lungs in the country when the 1938 polio epidemic started. Seeing a need for machines to support breathing, Nuffield turned to Macintosh for advice. C Pratt, a physiologist in the Nuffield department, produced a film to show Nuffield the available devices, and Nuffield responded by offering to provide a tank ventilator for every British Commonwealth hospital requesting one. Fortuitously, an ingenious Australian engineer, Ted Both, was in England to try and interest the Ministry of Health in his new direct-writing ECG. He had recently designed and built a simple wooden version of the Drinker “iron lung” in Australia, and agreed to allow Nuffield to use his design (Fig. 56.6). By 1947 the Morris car factory had built 1,750 Both ventilators (450 for British hospitals). This was a remarkable achievement, considering the wartime limitation on the supply of materials and labour, and the fact that the factory was concurrently producing Oxford vaporizers for anaesthesia, and mine-sinkers and other armaments for war purposes. 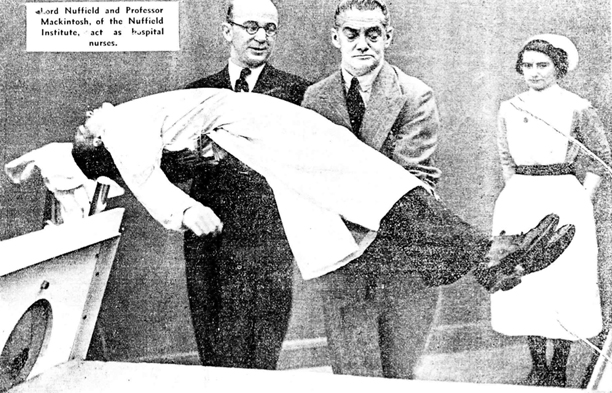 Professor Robert Macintosh (left) and Lord Nuffield putting a “patient” (Richard Salt, Chief technician) into a Both ventilator made in the Morris works at Cowley, Oxford in 1938. Salt was Macintosh’s assistant in London and later became a Chief Technician in the Nuffield Department of Anaesthetics, Oxford. He made many of the prototypes of apparatus developed in the department from 1937 to the 1970s. (Courtesy of Nuffield Department of Anaesthetics, Oxford, UK)
The Nuffield Department of Anaesthetics assumed responsibility for training medical and nursing staff in the use of the Both ventilator, and within five years of its introduction, the ventilator had supported respiration in patients with snakebite poisoning, diphtheritic diaphragmatic paralysis, and barbiturate poisoning, as well as poliomyelitis. In 1940, Macintosh attempted to tackle postoperative pain with large doses of morphine, treating the resultant respiratory depression with a Both ventilator. As he later wryly commented, “The idea did not catch on, since neither the patient nor the surgeon liked the idea of a patient waking up in a coffin.”

The iron lung had major disadvantages: patients had to synchronise swallowing and phonation with the machine’s rhythm; the machine was bulky and expensive; the rigid walls of the device limited access to the patient and thereby hindered nursing care; and achievement of a satisfactory neck seal could cause discomfort and ulceration of the skin. Furthermore, paralysis of laryngeal or pharyngeal muscles often resulted in the aspiration of mouth secretions, lung collapse, pneumonia, and death. Inserting a tracheostomy tube could prevent aspiration, but the rubber neck seal on the iron lung impeded care of the tracheostomy. These disadvantages ultimately resulted in the demise of INPV.

Toward the end of the nineteenth century, surgeons started to operate within the chest but opening the chest caused the lungs to collapse. In 1887, George Fell of Buffalo advocated the use a bellows and tracheostomy to inflate the lungs. Later he substituted a face mask for the tracheostomy. The next year Joseph O’Dwyer of New York (who had developed laryngeal tubes to maintain the airway in diphtheria) modified the technique by using a foot bellows that was connected to a laryngeal tube, and in 1899, Rudolph Matas, the innovative New Orleans vascular surgeon, reported that he had successfully used an anaesthetic modification of this apparatus to provide anaesthesia and ventilation during an operation to remove a chest wall tumour. He remarked at that time, that it was curious that surgeons had failed to use a technique that had been in use in the physiology laboratory since the time of Magendie [22].
Only gold members can continue reading. Log In or Register to continue

Tags: The Wondrous Story of Anesthesia
Mar 21, 2017 | Posted by admin in ANESTHESIA | Comments Off on The Story of Artificial Ventilation
Premium Wordpress Themes by UFO Themes
WordPress theme by UFO themes