The prototypes and the subtypes of visceral transplantation

While intestine being the central core of visceral allograft, the term “multivisceral” is a distinctive nomenclature for stomach-contained visceral allograft. Among multivisceral transplant, “full” contains liver allograft while “modified” does not. Secondary organs include colon and the pancreaticoduodenal complex with or without spleen. Colon can be retained with any three types of visceral allografts. The pancreaticoduodenal complex is routinely part of liver-intestinal graft and can be added to intestinal grafts for the patients who need combined intestine and pancreas transplant [8, 9].
We describe herein these three main prototypes of visceral transplantation and discuss the most relevant technical modifications in both donor and recipient procedures.

The combined liver-intestine transplantation is usually indicated for patients with intestinal failure who developed end-stage liver disease due to long-term parenteral nutrition [10, 11]. The procedure may also be indicated for patients with liver failure combined with portomesenteric venous thrombosis when isolated liver transplantation is not technically feasible.
The organs can be transplanted in a simultaneous or consequent fashion. The en bloc allograft includes the pancreaticoduodenal axis along with liver and small bowel to maintain continuity of gastrointestinal tract and integrity of axial blood supply. Pediatric or small candidates requiring combined liver and intestinal transplants may benefit from a “reduced-size liver”—small bowel graft [12] which may include left, right, or extended right lobes of the liver (Fig. 39.2). 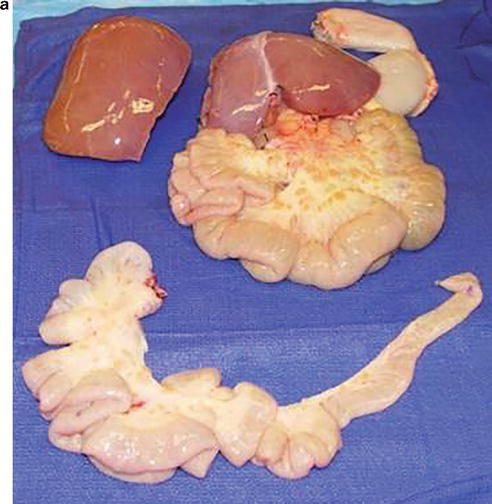 Full or modified multivisceral transplantation comprises nearly 24 % of adult and 13 % of pediatric intestinal transplants [10, 13]. It is indicated for patients with complex abdominal pathology including massive gastrointestinal polyposis, traumatic loss of the abdominal viscera, extensive abdominal desmoid tumors, locally aggressive non-metastasizing neoplasms, advanced generalized hollow visceral myopathy/neuropathy, and complete thrombosis of the splanchnic arterial or portomesenteric venous systems with hepatic decompensation [3].
From an immunological standpoint, multivisceral or combined liver-intestine transplant may have an advantage over isolated intestine transplant. The achieved better long-term engraftment with liver-contained graft compared to liver-free graft was reported by the senior author [3]. The improved outcome is mostly related to the immunoprotective effect of the concomitantly transplanted liver. This observation can be partially explained by the recently published data showing that liver-contained allografts were associated with significant clearance of preformed alloantibody and low induction of de novo donor-specific antibodies along with better survival in liver-contained allografts [14]. The study also demonstrated the important role of alloantibody in chronic visceral allograft injury and the liver can be immunoprotective with less favorable outcome in recipients with persistent alloantibodies.

Optimal donor selection is imperative to successful transplant outcome in intestine-contained transplantation. Prolonged downtime and the requirement for high-dose or multiple inotropes compromise the quality of visceral grafts. Other important factors include size disparity especially for recipients who lost the abdominal domain or large component of the abdominal wall. Allograft reduction in conjunction with efforts to increase abdominal domain including abdominal wall transplant and pre-transplant implementation of tissue expander in subcutaneous layer have been performed to facilitate graft coverage with newly created abdominal wall [12, 15, 16]. It is imperative to obtain arterial and venous vascular segments from the same donor to facilitate visceral allograft implantation. Accordingly, prompt inititation of communication with other abdominal organ-sharing programs is essential to facilitate smooth retrieval.

With an increase in the gap between organ donation and demand, a procurement procedure is needed that permits multiple-organ retrievals for separate recipients waiting for liver, pancreas, and intestinal allografts [4]. A recent advance in organ retrieval technique made it feasible to share these organs among three different recipients (Fig. 39.3). When multivisceral transplantation is required for patients with preserved liver function, modification of the technique made it possible to utilize the donor liver for one recipient and the remaining visceral organs to a second patient (Fig. 39.4). The term “modified’ multivisceral transplantation was first introduced in 1993 and recently published by the senior author [17–19].

Modified multivisceral graft that contains stomach, duodenum, pancreas, and small intestine. Note preservation of the gastroepiploic arcade and left gastric pedicle including the left gastric vein (LGV). Inset: Venous drainage of the composite visceral graft to the side of the recipient superior mesenteric vein (SMV) stump by using the donor common iliac vein as an extension graft without compromising the recipient portal venous flow during graft implantation. PV, portal vein; SV splenic vein
Upon entering the abdominal cavity, the intestine should be carefully examined. Thin mesentery with less adipose tissue is preferable because fat component is susceptible to ischemic-reperfusion injury, resulting in fat necrosis and subsequent mesenteric sclerosis after transplantation. Intestine with pneumatosis or portal venous gas is unacceptable for transplant. Iliac arteries and veins are accessed for the suitability for interposition grafts. Once quality of organ(s) is found to be satisfactory for transplant, direct communication between donor and recipient team prompts the recipient operation to minimize the cold ischemic time.
The first step of organ retrieval is performing the organ dissection with Cattel maneuver to mobilize small bowel and right colon that facilitates exposure of the vena cava and aorta [20, 21]. The left renal vein is identified with isolation of the SMA origin. Then the abdominal aorta is encircled distally for the eventual insertion of an infusion cannula. The supraceliac aorta is also encircled for later cross clamp.
After the colon and intestine are mobilized from retroperitoneum, the ileum is divided with the gastrointestinal stapler near the ileocecal valve when donor colon is not procured with the visceral organs. Right and transverse colons are detached from ileocolic vessels by taking down right and middle colic vessels. The remaining steps of the procedure are dictated by the type of required visceral allograft.

During the initial phase of retrieval with intact circulation, the liver and small intestine should be carefully manipulated and dissected en bloc with their central vascular structure [6, 22, 23]. The proximal end of allograft was transected at the bulb of duodenum just distal to the pylorus. Full preservation of the donor pancreaticoduodenal complex en bloc with the combined liver-intestinal graft was adopted to eliminate the need for biliary reconstruction and maintain continuity of the axial blood supply.
During the cold phase of dissection, the crucial final step in liver-intestine graft retrieval is excision of a large Carrel patch that contains both the celiac axis and SMA from anterior aortic wall without compromising the renal arteries [4]. By carefully opening the anterior wall of the aorta from its caudal portion to the root of SMA, the origins of the celiac axis and SMA and the two renal arteries can be readily visualized from inside the aortic lumen. After clear identification and protection of both renal arteries, the large Carrel patch can be fashioned safely.

En bloc dissection of the liver, stomach, duodenum, intestine, pancreas, and spleen from the diaphragm and retroperitoneum is performed. The graft to be retrieved can be modified according to patient’s need with exclusion of the liver or inclusion of the kidney. After dividing the diaphragmatic crura, the abdominal esophagus is stapled. A long segment of thoracic and abdominal aorta is retrieved in continuity with a Carrel patch containing celiac axis and SMA.

The procurement of modified multivisceral grafts can be aborted because of arterial anomalies that could potentially compromise the vascular inflow to the isolated liver allograft [19]. For proper cost-effective planning, CT angiogram may be considered at the time of donor evaluation. However, the decision to proceed with retrieval of the liver and the modified multivisceral graft to be given to two different recipients currently takes place in the donor operating room in most cases. In the presence of replaced or accessory right and/or left hepatic artery, the decision is based on liver surgeon’s decision whether the accessory hepatic artery can be sacrificed or reconstructed on the back table with a branch of the main hepatic artery. Preoperative CT angiogram or intraoperative ultrasound withclamping of the accessory vessels could facilitate the decision.
Similar to the full multivisceral organ retrieval, en bloc dissection of abdominal organs is carried out followed by transection of abdominal esophagus. The liver graft is separated in situ or on the back table. The hepatic artery is transected at the level of the common hepatic artery and the gastroduodenal artery is also divided. The bile duct is transected 5–10 mm above the duodenum to allow duct-to-duct reconstruction in the recipient who undergoes native pancreaticoduodenectomy. The portal vein is transected 5–10 mm above the splenomesenteric confluence to allow portal vein anastomosis in the recipient [4]. Allograft splenectomy is performed on the back table. Great attention must be directed to avoid injury of the pancreatic tail during allograft splenectomy. Preservation of the donor spleen en bloc with the composite allograft has been advocated by others [9, 24].

It is imperative, after completion of visceral organ retrieval, to obtain adequate arterial and venous grafts [6, 20, 21]. An iliac vein is commonly used as an interposition venous graft that is anastomosed to donor SMV for venous drainage. Iliac and carotid arteries are ideal conduit to be placed on the recipient’s aorta for implantation of isolated intestinal graft.
With combined liver-intestinal or multivisceral transplantation, a long segment of the thoracic/abdominal aorta is retrieved in continuity with the origin of both celiac axis and SMA. A segment of the back table prepared aortic conduit will be placed on recipient aorta, and the other segment is utilized on the back table as a single arterial conduit anastomosed to the common Carrel patch of both the celiac trunk and SMA.

In preparation for visceral transplantation, a first stage surgical exploration has been increasingly utilized. The primary purpose of the approach is to eradicate intra-abdominal infections by surgical methods including debridgement, repair of fistulae, and restoration of gastrointestinal continuity. Upon referral, these patients often have intra-abdominal infection with enteric leak, abscesses, enterocutaneous fistulas, infected foreign materials including ventral hernia mesh, and venting tube drainage with colonized multidrug-resistant organisms. Because of the need for heavy maintenance immunosuppression after visceral transplant, successful treatment of these infections is necessary for successful outcome.
Another valuable purpose of the initial surgical exploration is to restore gastrointestinal continuity. Foregut and midgut reconstruction, particulary in patients with prior bariatric surgery, reduces the need for composite visceral allograft by salvaging the native stomach and may eliminate the need for isolated intestinal transplantation in selected cases after successful rehabilitative surgery including bowel lengthening.
When such an ambitious goal of achieving natural autonomy is not reached, restoration of upper gastrointestinal continuity temporally improves quality of life and more importantly reduce the number of required visceral organs with the need in most cases for intestine-only allograft (Fig. 39.5). Accordingly, the pancreatic gland from the same donor can be retrieved and utilized for another recipient. Another important advantage of the technique is utilizing the native conduit as an end stoma in patients who require allograft enterectomy due to graft failure.

Colonic interposition and intestinal transplantation . A patient who developed midgut volvulus and underwent total enterectomy with leaking duodenal stump. Upon referral, a duodenocolic anastomosis was performed in close proximity to the duodenal papilla. After recovery, the patient underwent a transplant with an isolated intestine without the need for gastric or duodenum-contained allograft utilizing a segment of the native colon as a visceral conduit between native duodenum and proximal allograft jejunum. The allograft terminal ileum is then anastomosed to the distal end of the remaining native colon
Only gold members can continue reading. Log In or Register to continue