•   The nerve roots of the brachial plexus join to form the trunks.

•   The C5 and C6 nerve roots (with occasional significant contributions from C4) combine to form the superior trunk.

•   The 3 trunks emerge from the interscalene space and continue in an anterior, lateral, and inferior direction.

•   The trunks converge near the upper surface of the first rib and as they cross the first rib around the upper border of the clavicle, they divide into their separate anterior and posterior divisions.

The relationship of the subclavian artery and vein:

•   The relationship of the subclavian artery and vein (later the axillary artery and vein, respectively) to the trunks is an important consideration.

•   The subclavian vein (above the clavicle) is separated from the subclavian artery by the anterior scalene insertion, and therefore does not travel within the neurovascular bundle (Figure 58-2).

•   Distal to the clavicle, the axillary vein joins the neurovascular bundle, so that now the cords are found around the artery but also in between the axillary artery and vein.

The supraclavicular nerve block can be performed with either a nerve stimulator or under ultrasound guidance. The complication most often associated with this block is a pneumothorax. Remember that the apex of the lung is just medial and posterior to the brachial plexus as well as deep to the first rib. 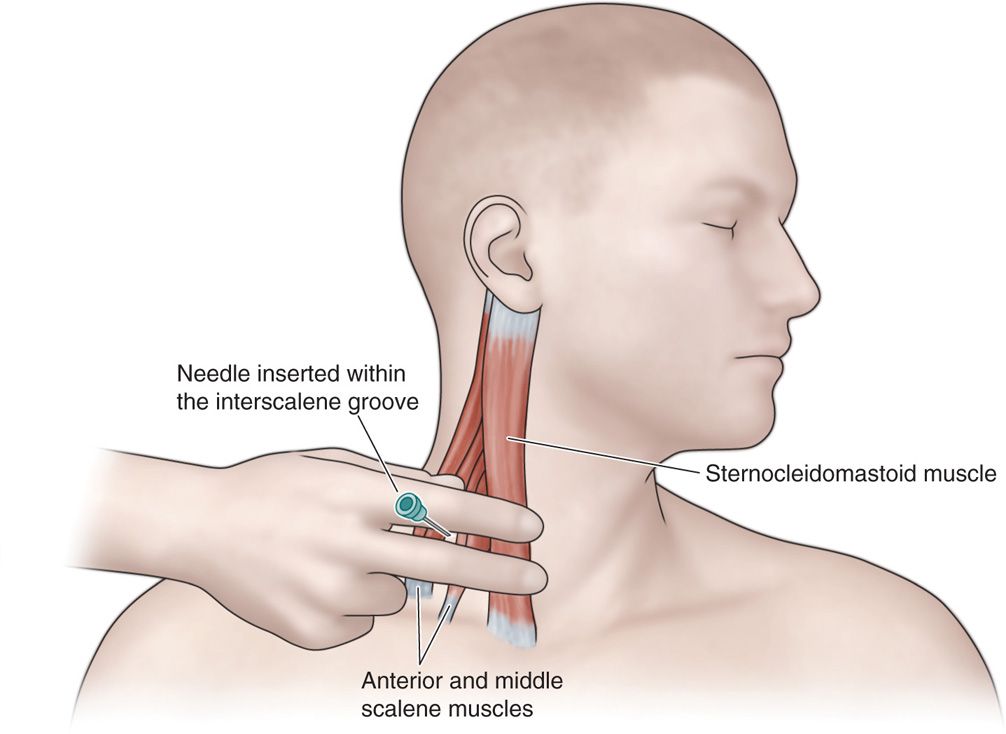 Figure 58-3. Landmarks for supraclavicular block. The initial approach is similar to an interscalene block. The posterior border of the sternocleidomastoid muscle is palpated. The fingers are then rolled laterally over the anterior scalene muscle into the interscalene groove.

•   The initial approach to this injection is identical to that of an interscalene nerve block.

•   Place the patient in a supine position and draw a line at the level of the cricoid cartilage (C6).

•   The arm should be at the patient’s side, pointing to the ipsilateral toes.

•   The head is turned toward the opposite side. The head should be turned three-fourths lateral, so as not to tense the neck muscles to the point where muscle bellies cannot be appreciated.

•   Palpate the posterior border of the sternocleidomastoid muscle at the C6 level.

•   Move the fingers laterally and inferiorly down the interscalene groove until they are approximately 1 cm from the mid-clavicle.

•   This location is the initial insertion site for the needle.

•   The practitioner stands near the patient’s head and directs the needle toward the axilla.

•   Proper needle placement is confirmed by flexion or extension of the digits at 0.3 mA or less.

•   The brachial plexus can be deep at this location, but is often reached at 2 to 4 cm.

•   Stimulation of the musculocutaneous nerve (biceps contractions) usually indicates the needle is too lateral.

•   Scapular movement indicates the needle is posterior to the plexus.

•   If the needle encounters bone (the first rib), it is too anterior and must be walked posteriorly.

•   Because of the close proximity of the lung, the needle should never be directed medially.

•   Position the probe on the neck directly above the clavicle in the supraclavicular fossa.

•   The probe should be placed parallel to the clavicle.

•   The practitioner should identify the subclavian artery, the first rib, the pleura, and the brachial plexus.

•   At this level, the plexus will be configured as trunks or divisions and is typically located lateral and slightly superior to the subclavian artery at a depth of 2 to 4 cm. 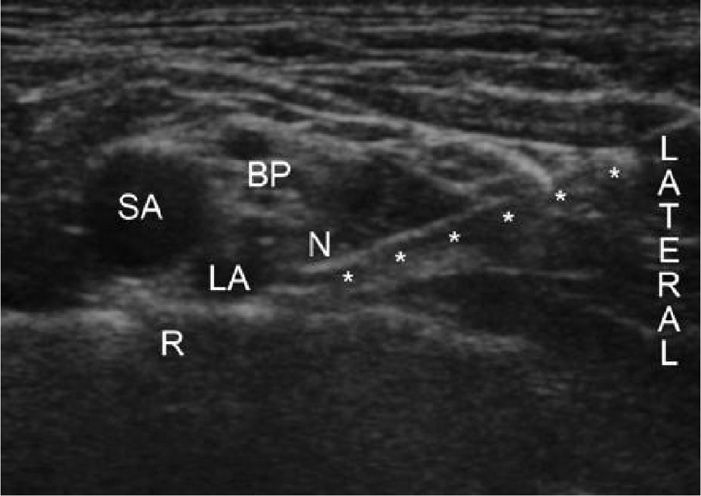 •   The initial local anesthetic injection is made near the lowest nerve trunk, close to the subclavian artery.

•   If local anesthetic spread is adequate, the entire volume is injected.

•   If spread to the superior nerve trunks is deemed inadequate, the needle should be repositioned and the remaining local anesthetic injected.

•   The brachial plexus will appear like a bundle or cluster of grapes (hypoechoic circles with hyperechoic rings).

•   If three bundles are visualized, the practitioner is at the level of the trunks.

•   If 5 to 6 clusters are seen, then the practitioner is at the level of the divisions.

•   Always keep the tip and shaft of the needle in view to ensure that the needle is not penetrating too deep into the supraclavicular fossa; deep penetration can result in an inadvertent pneumothorax or vascular puncture. 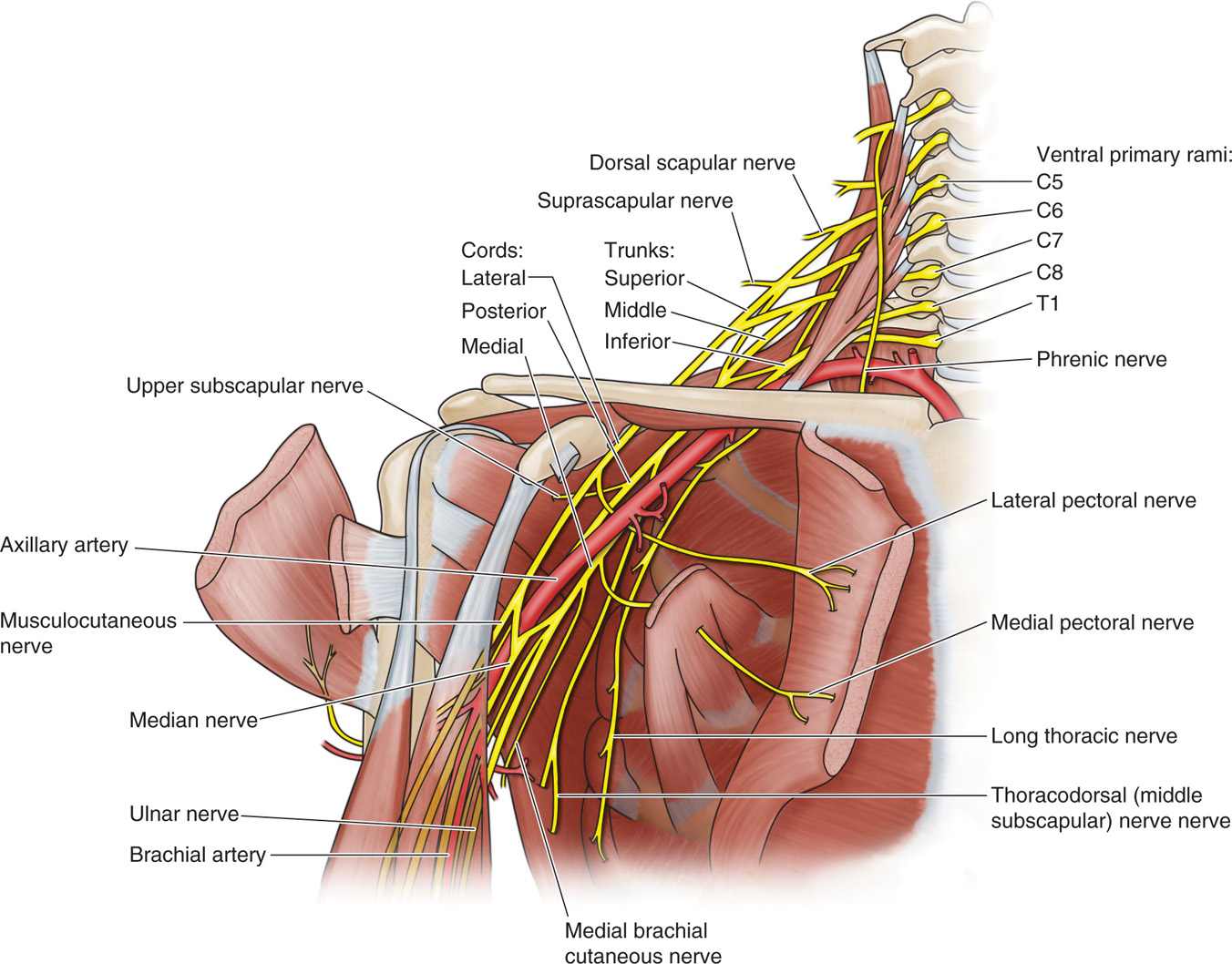 Figure 58-7. Relationship of the cords of the brachial plexus to the axillary artery in the infraclavicular fossa.

As with most blocks, techniques exist for performing as the infraclavicular block using either the ultrasound or nerve stimulator approaches. With the supraclavicular block, the proximity of the lung, though usually further from the target injection site than in the supraclavicular approach, makes pneumothorax a potential complication. Since the nerves of the brachial plexus surround the axillary artery, intravascular injection of local anesthetic is also a complication to be wary of. Frequent aspiration during all portions of the injections is warranted.

•   The key landmarks are the midpoint of the clavicle medially, and the axillary pulse laterally.

•   One must visualize the course of the axillary artery between these two points, as the needle target is essentially the artery (with the nerves surrounding it) as it follows this course.

•   The block is most easily performed with the arm abducted to roughly 90 degrees allowing for palpation of the axillary pulse.

•   One stands at the head of the patient, or on the contralateral side to the block.

•   A 4 to 6 in insulated nerve stimulator needle is inserted just lateral to the midpoint of the clavicle, entering the skin at roughly a 45-degree angle, aiming at the visualized course of the axillary artery.

•   The nerve stimulator is initially set at 1.5 mA, allowing for the initial phase of searching for the general location of brachial plexus twitches.

•   Musculocutaneous (biceps) twitches are not acceptable, as this nerve has such an early high take-off from the remainder of the plexus that local anesthetic deposited here may not fill the remaining parts of the sheath well. This will lead to a delayed and potentially patchy block.

•   As acceptable twitches are located, the fine tuning of the location of the plexus begins. This involves interplay between slowly decreasing the twitch intensity as one maps out a more exacting location for the nerves with increasingly finer needle repositioning.

•   When acceptable twitch intensity has been reached (usually under 0.35 mA), the local anesthetic can be injected.

•   Volumes for adequate blockade are in the 30 to 50 mL range. Frequent aspiration during injection is indicated because of the close proximity of the plexus to the axillary artery.

•   This block can require more searching for an acceptable twitch because of the depth of the block versus the superficial skin landmarks. Therefore, very efficient use of the nerve stimulator and needle are important. One must essentially construct a 3D mental image of the underlying anatomy as twitches are obtained to allow one to efficiently zero in on the location of the brachial plexus.

•   While a musculocutaneous twitch is not acceptable for a block, it still provides one with useful information, namely that the needle is directed to cephalad.

•   One must be wary of needle angles steeper than 45 degrees, since increasingly steep needle entry increases the chance of causing a pneumothorax.

•   Despite an acceptably low milliamperage twitch, one may still have patchy blocks. This is because of fascial divisions inhibiting full spread of the local anesthetic in this portion of the brachial plexus sheath.

•   Unfortunately, the nerve stimulator technique does not allow for the repositioning of the needle during the injection as once the initial twitch is lost there is nothing left to guide one in needle positioning.

•   This is one clear advantage of the ultrasound technique, where one can visualize the anesthetic spread, and reposition one’s needle during the injection.

•   Some practitioners may opt for a lower frequency probe in patients with large chest walls. 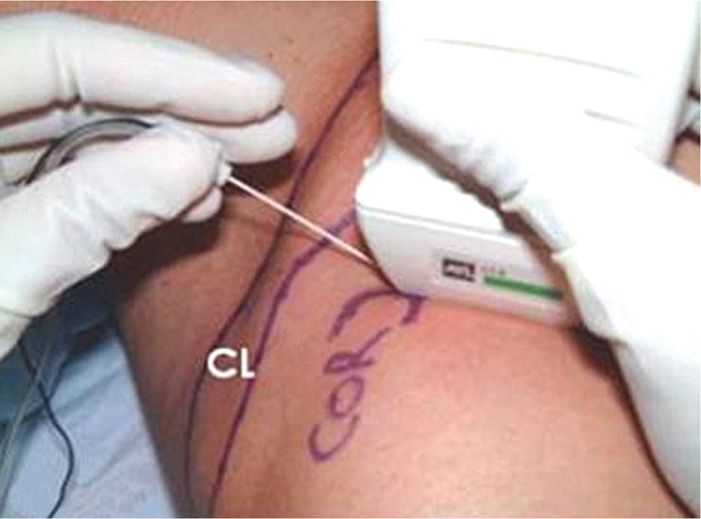 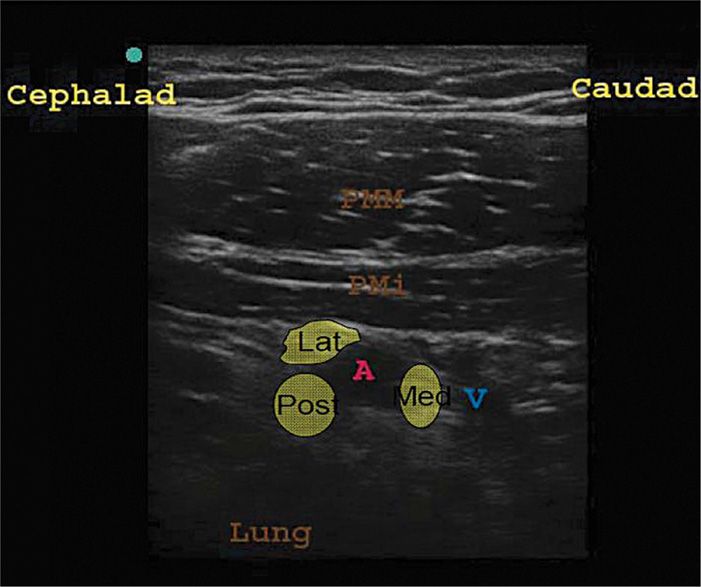 •   The probe is oriented in a parasagittal plane so as to cut across the axillary artery in the short axis.

•   The probe location can be anywhere from the mid-clavicle to the coracoid.

•   Visualize two major vascular structures, the axillary artery and vein deep to the pectoralis minor muscle belly. The artery is on the cephalad side of the vein, and is rounder and less compressible than the vein.

•   If more than two vessels are seen, slide probe medially, simplifying the image as branches of vessels rejoin the major trunks.

•   The nerves of the plexus may or may not be visualized as hyperechoic structures surrounding the artery.

•   The needle is introduced from the cephalad side of the ultrasound probe, in plane with the beam so as to allow the needle path to be visualized from the start.

•   The goal is to place the needle just alongside the cephalad portion of the artery.

•   Injection of local anesthetic can then commence in small increments (with frequent aspiration to ensure no intravascular placement).

•   It is very important to pay attention to the spread of the local anesthetic, since, as mentioned previously, there are fascial divisions described in this portion of the plexus inhibiting full spread from a single injection site.

•   If full spread of the local anesthetic around the artery is not seen surrounding it like a doughnut (except for the most superficial side of the artery), reposition the needle under direct visualization. Usually one repositioning is enough to complete the spread. Some practitioners like to inject separately along the caudal side of the artery to assure better spread to this portion of the plexus sheath.

•   Careful to make sure that the needle does not enter the artery or the vein during injection.

•   The vein is very compressible. As one presses with the ultrasound probe, it may be occluded and not well visualized. This is important to remember to prevent inadvertent puncture of the vessel. This is especially important if one is injecting on the caudal side of the artery, in the space between the artery and the vein.

•   The needle path should be visualized throughout, from right after skin entry. It is only in this way that one can be assured that one is visualizing the tip of the needle, rather than a portion of the shaft. This is important both in placing the needle in the correct spot for injection, as well as preventing inadvertent puncture of a vessel or a pneumothorax.

•   One of the major benefits of the ultrasound approach in this block is avoiding the patchy blocks sometimes seen with nerve stimulator approaches due to fascial divisions inhibiting full local anesthetic spread. It is very useful to be able to move one’s needle under direct visualization and deposit local anesthetic in several areas around the artery to ensure more uniform spread of the anesthetic agent.

•   While not critical for the block, the nerves are often better visualized with the patient’s arm abducted, making them more taught and more echogenic.