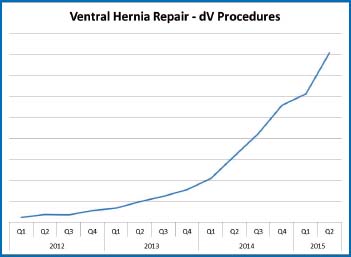 Surgeons who regularly offer laparoscopy for inguinal hernia repair comprise an overwhelming minority despite its well established benefits. Adoption rates vary from 14 to 19% in the United States. Many attribute low penetration rates as a testament to the difficulty of the approach, which requires both a comprehensive understanding of the anatomy of Fruchaud’s myopectineal orifice (MPO) as well as the technical skill to surgically intervene within this space. The proposed enabling effect of the robotic instrument has allowed many surgeons to regularly incorporate MIS hernia repair into their practice. This statement underscores a very important concept in that robotic inguinal hernia repair should be considered analogous to the laparoscopic approach performed with a different instrument and as such, well-established principles of posterior hernia repair must be adhered to.
This chapter is dedicated to detailing the robotic transabdominal preperitoneal inguinal hernia repair (r-TAPP) technique implicitly adhering to the principles well established in conventional laparoscopy.

The patient can either be placed in a conventional supine or lithotomy position. Port position and trocar set-up is analogous to that of traditional laparoscopic repair (Fig. 13.3). We prefer open supraumbilical entry with a 12-mm balloon trocar although an 8.5-mm daVinci (dV) trocar for the 8-mm camera may also be utilized. Either 5-mm or 8-mm instrument trocars are then placed 10 cm lateral to the camera port, irrespective of the site of the hernia. 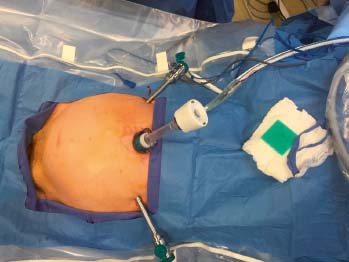 Port position
While there are many options to dock the robot, we prefer docking in between the legs with the patient in a supine lithotomy position (Fig. 13.4). Docking over either hip, however, can also be employed which will achieve equal access to both right and left groins in the setting of bilateral hernias. 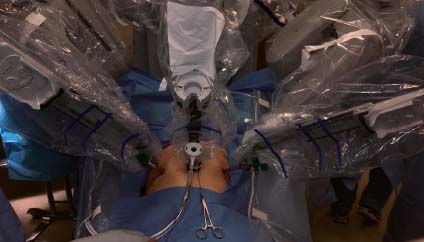 Docking in a supine lithotomy position
For most cases we utilize two instruments including the dV prograsp and dV monopolar scissors (Fig. 13.5). With this instrumentation profile, we also use an absorbable tacker to fixate and reperitonealize the mesh. A suture-cut needle driver can also be used for blunt dissection as well as suture mesh fixation and re-approximation of the peritoneal defect. For patients with large inguinoscrotal hernias, a dV Maryland bipolar grasper may be considered helpful to facilitated hernia sac reduction.

dV Instrumentation
We prefer the use of a 12-mm zero-degree scope although this is also optional at the operator’s discretion. After docking of the robot, the instruments are placed under direct vision.

As in any hernia repair, the first part of the procedure involves reduction of the hernia content. Incarcerated bowel contents through an inguinofemoral hernia must be dealt with safely and meticulously (Fig. 13.6). When aggressive bowel handling is required, the dV fenestrated bipolar instrument is used because of its lower grip strength in comparison to the dV prograsp. 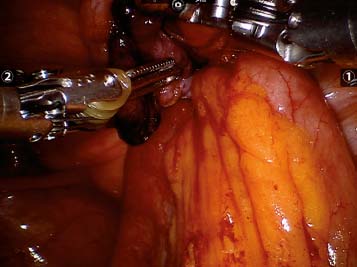 Incarcerated femoral hernia
In the setting of incarcerated bowel contents and following successful reduction, viability of the intestinal segment must be assured. We routinely employ Firefly technology as an adjunctive measure to assess intestinal perfusion (Fig. 13.7). This technology is similar to the use of fluorescein and a Wood’s lamp to evaluate bowel viability. Five ml of indocyanine-green (IcG) is administered and intestinal perfusion can be assessed within a minute of injection. The bowel is confirmed to be viable if under Firefly view it demonstrates a green tone. 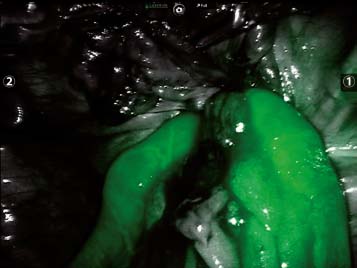 After successful reduction of the hernia content, key surface anatomical landmarks are identified (Fig. 13.8). Accurate identification of key landmarks will not only delineate the type of hernia present, but also provides a road map to guide preperitoneal dissection. The bedside assistant is advised to palpate the level of the anterior superior iliac spine (ASIS) to reference the position of the iliopubic tract. This will also help determine the site of initial peritoneal incision. 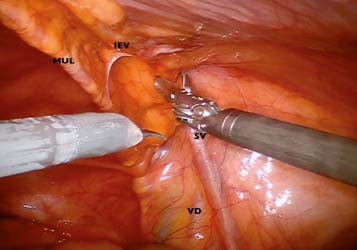 A high peritoneal tranverse incision is made from the level well above ASIS to the level of the median umbilical ligament. This transverse incision should be made a minimum of 5 cm cephalad to the superior aspect of the hernia defect. This allows for both adequate cephalad overlap of the mesh and creating a redundancy in the peritoneal flap to facilitate reperitonealization of the mesh. It is common to include the transversalis fascia within the initial incision but every attempt is made to initiate flap dissection in the true preperitoneal space (Fig. 13.9). True preperitoneal dissection orients the operator within the correct plane for hernia sac reduction and final flap development. Benefits of exploiting this space also include avoidance of perforating vessels to the the overlying rectus muscle which can cause unnecessary bleeding. The true preperitoneal space is avascular allowing for blunt dissection to the level of the hernia sac. Given the translucency of the peritoneum within the correct plane, meticulous dissection is required to avoid creating peritoneal rents and tears. A consistent awareness of visual stimuli or cues is employed to overcome the loss of haptic feedback during peritoneal retraction and manipulation. 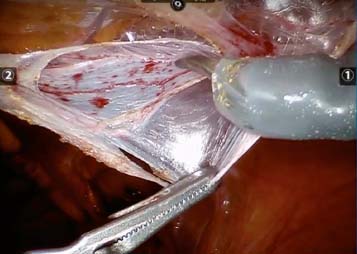