Acute respiratory failure (ARF) is a life-threatening process that requires rapid identification and treatment by the emergency physician.1 The causes of ARF are myriad, and its clinical presentation ranges from somnolence and hypopnea to profound tachypnea, tachycardia, and agitation. Appropriate diagnosis and treatment of ARF flow from a sound understanding of pulmonary pathophysiology.

Normal respiratory activity has been described as a functional chain, beginning with the central nervous system (CNS) and ending with the thoracic cage, muscles of respiration, pulmonary parenchyma, and the pulmonary vasculature.3,4 A break in any of these links may result in ARF. ARF occurs when the respiratory system is unable to meet the metabolic needs of the tissues.2 Classically, this clinical state is divided into hypoxemic and hypercapnic respiratory failure.

Alveolar ventilation is the process by which the lungs deliver oxygen to the pulmonary capillaries and rid them of carbon dioxide. The alveolar gas Equation describes the relationship between oxygen and carbon dioxide in the alveolus at a given atmospheric pressure and fraction of inspired oxygen:

This Equation does not imply cause and effect; it is merely a description of the relationship between oxygen and carbon dioxide tensions in the alveolus. For instance, when the CNS is depressed as a result of a toxic or anatomical insult, normal alveolar ventilation may be impaired. In this context, the partial pressure of carbon dioxide in the alveolus will rise, and the partial pressure of oxygen in the alveolus will fall; the two processes however, are independent from one another—it is the alveolar hypoventilation that links both abnormalities.

The alveolar–arterial, or A–a, gradient is a calculation that provides a means of assessing how well oxygen is moving from the alveoli to the arterial blood:

An elevated A–a gradient (>10 mm Hg) is seen in patients with diffusion defects, ventilation–perfusion mismatch, or shunting. In the setting of hypoventilation, the difference between the alveolar oxygen concentration (as calculated from the alveolar gas Equation above) and the measured arterial PaO2 is minimal, and therefore the A–a gradient should be normal.

In practice, however, global alveolar hypoventilation is commonly complicated by states that also alter the pulmonary parenchyma (e.g., aspiration, compressive atelectasis). The administration of supplemental oxygen, a common intervention in these patients, can also cause ventilation–perfusion anomalies (See below) and nitrogen atelectasis.2,3 These two factors can raise the A–a gradient, thereby diminishing the clinical utility of this calculation.

From the alveolus to the erythrocyte, a molecule of oxygen must pass through an alveolar epithelial cell, a small interstitial space, the pulmonary capillary endothelium and then into the erythrocyte. Any disease or disorder that disrupts this passive diffusion process is known as diffusion impairment. Diffusion impairment may contribute to—but rarely drives—hypoxemia. Normally, the concentration of oxygen in the alveolus and an erythrocyte equilibrate one-third of the way through the pulmonary capillary bed (carbon dioxide does so much more rapidly).2,3 This rapid equilibration ensures that even when capillary transit time decreases substantially (e.g., during exercise) there will be no compromise of gas exchange. However, hypoxemia will be amplified when there is an effective decrease in alveolar–capillary surface area (e.g., severe emphysema or severe interstitial lung disease such as pulmonary fibrosis) in conjunction with increased pulmonary blood flow. When this pathologic state exists, the oxygen tension in the erythrocyte is unable to equilibrate with alveolar oxygen tension prior to the erythrocyte’s passage through the pulmonary capillary bed.

V/Q mismatch is the most common and important mechanism of hypoxemia encountered by the emergency physician.1 Alveolar ventilation (Va) is determined by three variables: (1) respiratory rate (RR), (2) tidal volume (Vt), and (3) dead space fraction (Vd/Vt), as related in the following Equation:

The product of the RR and Vt is known as the minute ventilation (Mve). If alveolar ventilation to a unit of lung exceeds its blood flow (Q), the Va/Q ratio exceeds 1. Such Va/Q mismatch produces alveolar and capillary gas tensions similar to air (i.e., high oxygen and low carbon dioxide). While one would expect such lung units to be beneficial, they are, in fact, inefficient. Lung units with Va/Q ratios >1 yield a high partial pressure of oxygen in the pulmonary capillary; however, the arterial oxygen content draining from these units does not dramatically increase. Recall that the total oxygen content of blood is primarily determined by hemoglobin concentration and saturation, and that only a small portion of blood oxygen content is composed of dissolved oxygen. Because the oxyhemoglobin dissociation curve (Fig. 8.1) is largely flat once the PaO2 is much >60 mm Hg, large increases in PaO2 do not greatly increase oxygen saturation. 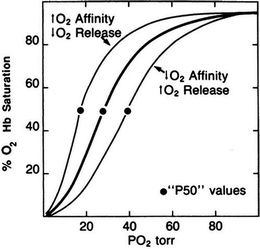 Dead space is an area of the lung that is ventilated but not perfused. There is a normal amount of physiologic dead space in all lungs as the conducting airways do not participate in gas exchange. However, alveoli that are not perfused are considered pathologic dead space. These two types of dead space are referred to as anatomical and physiologic dead space, respectively. Dead space (both anatomical and physiologic) is, by mathematical definition, a high Va/Q unit. However, rather than being a function of increased ventilation, dead space is the result of absent pulmonary blood flow (i.e., a Va/Q ratio of infinity). These portions of the lung behave differently from lung units with Va/Q ratios >1 (i.e., high Va/Q ratios). Examination of Equation 8.3 (above) reveals that dead space and alveolar ventilation (Va) are inversely proportional. Therefore, increased dead space results in a functionally low Va/Q physiology. As discussed below, the consequence of low Va/Q physiology is both hypoxemia and hypercapnia.

Shunt is the most severe form of low Va/Q physiology (i.e., a Va/Q ratio of zero); shunt occurs when mixed venous blood passes into the left heart without participating in gas exchange. Shunt may have cardiac (e.g., patent foramen ovale) and/or pulmonary (e.g., severe pneumonia and acute respiratory distress syndrome [ARDS]) etiologies. The result of shunt is that mixed venous blood returns to the left heart without being exposed to alveolar gas. The more shunt a lung has, the more mixed venous blood oxygen content will contribute to arterial oxygen content. While it is commonly taught that shunt physiology does not respond to supplemental oxygen, this is only partly true. Oxygen-refractory hypoxemia due to shunt only begins to occur when the shunt fraction of the lung approaches 40% to 50%.3 Notably, acute lung injury and ARDS typically occur when the shunt fraction approaches 20% to 30%.

Arterial oxygen saturation is determined by the mixed venous oxygen saturation—that is, the blood entering the lungs from the right ventricle—and the degree to which the lungs can match ventilation with perfusion. If the blood returning to the lungs is disproportionately desaturated—as a result of increased oxygen consumption in the tissues, low cardiac output, or low hemoglobin levels—then the effects of Va/Q mismatch, and in particular shunt physiology, will be magnified.

Hypercapnic respiratory failure is a result of impaired alveolar ventilation (Va). As described in Equation 8.3, alveolar ventilation is determined by three variables: (1) RR, (2) tidal volume, and (3) dead space fraction. It follows that hypercapnia can result from impaired central drive to respiration, neuromuscular weakness, chest wall deformities, lung disease that increases the resistive or elastic load on the lungs, and increased dead space. Many of the aforementioned disease states are also associated with Va/Q mismatch.

While it is intuitive how CNS depression and neuromuscular weakness lead to hypoventilation and hypercapnia, it is less obvious how diseases with increased pulmonary elastic and resistive loads like chronic obstructive pulmonary disease (COPD), asthma, and chronic heart failure (CHF) result in hypercapnia, as patients with these issues typically present with dramatically increased RRs. The important physiologic anomaly in these disease states is rapid shallow breathing. The shallow tidal volume (Vt) serves, despite the tachypnea, to both decrease minute ventilation (Mve) and increase the dead space fraction of ventilation. Because anatomical dead space (Vd) stays relatively constant, a precipitous drop in Vt acts to increase dead space fraction (Vd/Vt). As described above, true dead space ventilation prevents the lung from removing carbon dioxide, and while dead space is technically a high Va/Q ratio, its physiology mirrors that of low Va/Q units with hypoxemia and hypercapnia as a consequence.

While increased production rarely is the sole cause of hypercapnia, it can be an important contributor, especially when work of breathing is high. With extremis, the muscles of respiration can increase total body carbon dioxide production by fourfold.5 Fever also increases CO2 production by approximately 10% per degree celsius.6

AN ALTERNATIVE DIAGNOSTIC APPROACH TO ARF

The traditional classification of respiratory failure as either hypoxemic or hypercapneic does provide some indication of underlying etiology of failure, and can help direct initial ventilator settings. Given the overlap between these etiologies discussed above, and the fact that Va/Q mismatch is by far the most common cause of ARF, a more physiologically intuitive and clinically useful approach to ARF may be to overlay the common insults to alveolar ventilation and perfusion onto the framework of the respiratory chain. To this end, a simplified scheme (Table 8.1) thus divides ARF into neuromuscular abnormalities and parenchymal abnormalities which include airway injury or dysfunction, alveolar injury, and pulmonary vascular injury.2 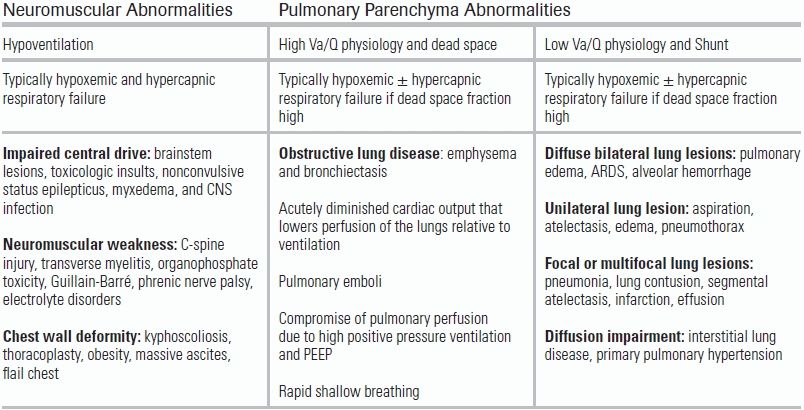