MRI of lumbar spine with artifact due to epidural catheter. Personal library 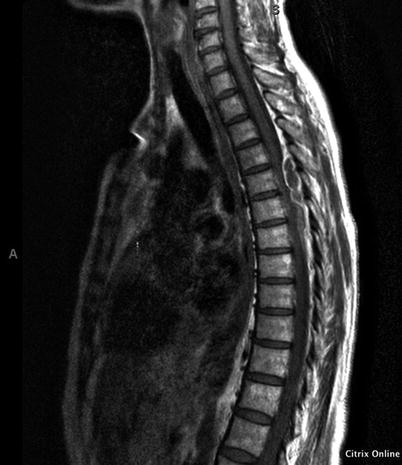 MRI prior to decompression revealing a large extradural collection from T5 to T6 causing significant compression of the spinal cord. Personal library 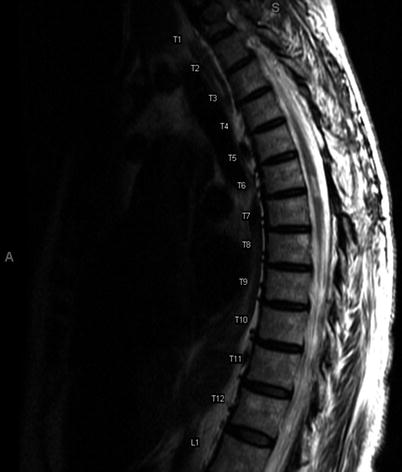 Permanent paralysis after epidural catheter insertion is a rare but catastrophic event. Epidural hematoma is the most common cause of permanent neurological deficit after epidural block. Other common causes are epidural abscess, spinal cord infarction, traumatic injury, arachnoiditis, and local anesthetic and adjuvant toxicity. Spinal epidural hematoma has been described in autopsies since 1682 as “spinal apoplexy” and as a clinical diagnosis since 1867 [1, 2].

The estimated incidence of epidural hematoma commonly cited in the literature is <1 in 150,000 epidurals and <1 in 220,000 spinal anesthetics [3]. In a recent report, using a multidimensional search strategy including analysis of the electronic medical records at a single major US institution, others have found a rate of 1:7200 [4]. In an Australian review of more than 8000 cases, in which an epidural catheter was placed by the acute pain service and managed for several days, the combined rate of epidural abscess and hematoma was 1 in 1026 [5]. In females undergoing knee arthroplasty, the risk was 1 in 3600 [6]. The incidence of epidural-related serious morbidity and mortality is higher when blocks are placed perioperatively, rather than for obstetric and pediatric populations or for chronic pain management [7]. A review of the ASA Closed Claims database revealed that spinal cord injuries were the leading cause of nerve injury claims in the 1990s [8]. Spinal epidural hematomas accounted for nearly half of the spinal cord injuries reported, and the median payment was very high. In an analysis of claims after regional anesthesia between 1980 an1999, three-fourths of patients had evidence of a preexisting or iatrogenic coagulation abnormality [9]. In an analysis of the closed claims data from 2005 to 2008, there were three cases of compressive epidural hematoma after cervical injections. The unfavorable outcomes from these interventions were more severe than adverse outcomes from all other procedural interventions for pain [10].

Epidural hematomas are caused by bleeding from the prominent valveless venous plexus found in the low-pressure epidural space [6]. They are more likely to be present in the thoracic spine where a prominence of the epidural venous plexus has been described. Because the thoracic vertebral canal in the mid-thoracic area is narrower than the lumbar one and contains less fatty and fibrous connective tissues, even a small hematoma can compress the spinal cord in this area. The amount of epidural fat in the posterior epidural space decreases with age and body weight, making older patients more vulnerable. Some argue that because venous pressure is generally lower than intrathecal pressure, venous bleeding should not cause acute spinal cord compression [11]. On the other hand, bleeding from an arterial source accumulates rapidly and causes neural ischemia soon after vessel trauma. Most epidural hematomas become symptomatic days after epidural needle or catheter placement, suggesting the bleeding is not arterial.
Among the causes of epidural hematomas reported in the literature are spinal surgery, trauma, spinal or epidural injection, arterial venous malformations, tumor hemorrhage, lumbar puncture, myelography, and spinal manipulation [12]. In a review of 613 cases published between 1826 and 1993, epidural hematoma was idiopathic or spontaneous in 30% of cases, related to anticoagulation in 17% and related to spinal or epidural anesthesia in 10% of cases [13].
Numerous predisposing factors for epidural hematoma have been described: patient-, technique-, and medication-related (Table 16.1). In the majority of cases, it is difficult to identify a sole cause for epidural hematoma. The interplay of various predisposing factors creates the conditions for epidural bleeding to occur. Radiographic imaging, reviewed before performing interventional spine and pain procedures, assesses for central and foraminal stenosis, disc herniations that compromise canal diameter, ligamentum flavum hypertrophy, epidural fibrosis, and previous surgical scarring that can alter the level of procedural difficulty [14].

The symptoms of epidural hematoma result from compression of the spinal cord or nerve roots below the affected spinal level: neck or back pain and radicular pain, followed by more or less severe, but usually progressive, paralysis. The pain is intense, constant, and knifelike and worsens with coughing, sneezing, or straining. High cervical epidural hematomas can lead to spinal shock or even death [15]. Cauda equina syndrome due to hematoma formation, a rare complication with a reported incidence of 2.7 in 100,000 epidural blocks, resulted in permanent deficit in more than two-thirds of cases [6]. Its symptoms are low back pain, altered proprioception, decreased sensation to pinprick and temperature in the lumbar and sacral distribution, voiding and defecation disturbances, and progressive loss of muscle strength.
Not all of these symptoms are present at the same time. A literature review of nonoperative and operative cases of epidural hematoma found that 16% of the cases managed conservatively suffered only backache or neck pain and another 9% of cases had mild radicular symptoms [16]. In 88% of these patients, diagnosis was based on MRI. Conversely, among the series of hematomas managed operatively, local pain or isolated radicular symptoms and signs were present in only 6% of the patients [16]. Isolated vesicorectal dysfunction also has been described [17]. In patients who are receiving local anesthetics epidurally, the most common presenting symptom may be increased motor block rather than back pain [9]. The presence of postoperative numbness or weakness may be erroneously attributed to local anesthetic effect rather than spinal cord ischemia, which may delay diagnosis.
Although some symptoms manifest within 24 h, most epidural hematomas become symptomatic several days after an epidural placement. Far less frequently, symptoms are slowly progressive, chronic or relapsing, or mimic an acute intervertebral disc prolapse (Fig. 16.4). 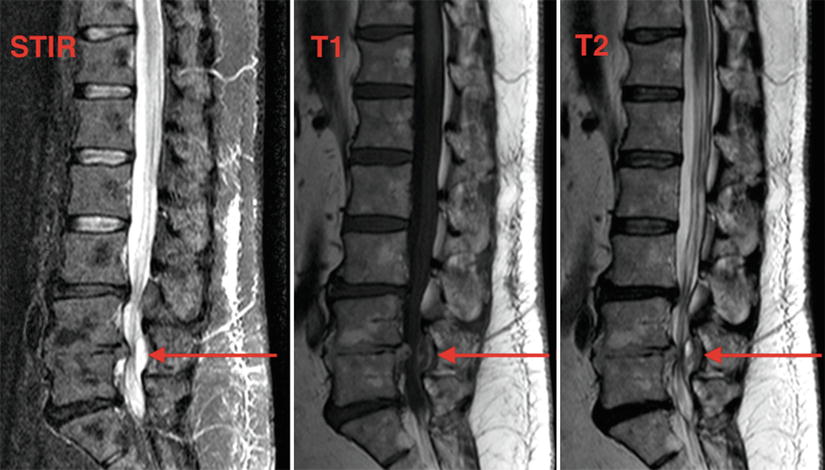 Emergent magnetic resonance imaging (MRI) or computed tomography scan (CT) when MRI is contraindicated is recommended as soon as spinal hematoma is suspected. An urgent neurosurgical consult sought to evaluate for decompressive surgery is required if an epidural hematoma is detected. On MR imaging, a hematoma appears as an isointensity on the spinal cord seen on T1-weighted images or as a heterogeneous hyperintensity with focal hypointensity on T2-weighted images [18]. In regard to CT imaging, it appears as a high-density mass in the spinal canal compressing the cord [19].
Though MRI is considered the gold standard for diagnosing an epidural hematoma, whether to leave in place or remove epidural and peripheral nerve catheters during MRI is not clear. Potential concerns encompass catheter movement, device heating, or interference with MRI scanning. Depending on the material of catheters, MRI may not be advisable to confirm diagnosis. Many catheters are wire reinforced or contain a flexometallic ring, thus making MR imaging contraindicated [20].
Newer packaging contains a label specifically identifying MRI unsafe catheters. Caregivers who screen patients for MRI compatibility may not know which catheters are unsafe. See Table 16.2 for commonly used catheters and their MRI compatibilities. Clinicians should plan in advance for the uncertainty of catheter compatibility with MRI and have alternate diagnostic strategies, such as proceeding to surgery without MRI guidance or performing computerized tomography with a myelogram [21]. Manipulation of a catheter may increase bleeding; thus, removal of a catheter is not advisable before imaging. Careful consideration must be given for each individual case.


Information incorporated from www.​mrisaftey.​com
Unsafe 1: Object poses a risk or hazard to a patient or individual in the MR environment. The presence of this object is contraindicated for an MR procedure
Unsafe 2: Object is contraindicated for an MR procedure or for any individual in the MR environment. Potential risks include possible induced currents, excessive heating, as well as other potentially hazardous conditions
Conditional 8: Pertaining to an implant/device that has MRI labeled as 1.5-T and 3-T, only. In some cases, may be associated with single- and two-overlapped versions of a stent

Neurologic recovery is more likely if decompressive laminectomy is performed within 8 h of symptom onset. In a retrospective case series of 61 epidural hematomas, patients who had decompressive surgery less than 8 h after onset of paraplegia had better neurologic outcomes than if surgery was performed more than 24 h after symptom onset [22]. In this series only 38% of patients had partial or good neurologic recovery, and even with prompt diagnosis and decompression, many patients had permanent neurologic deficits [22]. The final neurologic outcome depends on the time span between hematoma formation and surgical decompression, the speed with which the hematoma develops, the severity of the preoperative neurologic deficit, the size of the hematoma, and the patient’s age (the older the patient the worse the prognosis) [13, 22].
Hematomas that are found incidentally, chronic stable hematomas, or hematomas with minimal symptoms that appear to be resolving have a good outcome when managed nonsurgically, provided that the patients are evaluated with regular neurologic exams and MRI (Fig. 16.4) [23]. Leakage of the hematoma through the intervertebral foramen and its spread along the epidural space may explain spontaneous recovery [16].
In patients with an acute epidural hematoma from an indwelling epidural catheter, the removal of the catheter can worsen the bleeding. When an epidural hematoma is diagnosed, anticoagulation is discontinued immediately, and reversal of anticoagulation should be considered with fresh frozen plasma, vitamin K, plasmapheresis, and dialysis. These interventions should not delay decompressive surgery.

Patient selection and identification of risk factors for epidural hematoma are essential for an optimal outcome. A safety checklist includes an evaluation of the patients and family history of bleeding disorders, screening for medication and supplements known to influence coagulation status, review of radiographic images to identify anatomic challenges, and determination of the best time for (re)initiation of anticoagulation and antiplatelet therapy. Close communication with prescribing physicians is necessary. Alerts built into computerized physician order sets and computer-assisted decision support systems have proved to be effective in increasing adherence to practice guidelines and preventing inadvertent coadministration of multiple anticoagulants [24].
Various techniques have been proposed to minimize the risk of epidural hematoma. Medial insertion of needle is preferred because a lateral puncture increases the risk of injuring epidural veins. Some interventionalists advocate the use of short-beveled or blunt-type needles [25]. In a prospective study of 2376 interlaminar cervical epidural steroid injections, no significant hemorrhagic complications were discovered, regardless of the needle type [26]. The epidural catheter should not be introduced more than 3–5 cm into the epidural space.
Only gold members can continue reading. Log In or Register to continue