Sheared or Break of Caudal Catheters After Epidural Steroid Injection

Catheter sheared when threaded through a needle with a bent tip

The physical and social impact of low back pain is enormous. It is one of the leading causes of disability in the past several decades [1]. Lifetime prevalence of back pain is reported at 50–90% [2, 3]. The economic cost of back pain is increasing both in terms of health-care expenses and lost productivity [4]. The etiology of back and leg pain varies, but the exact etiology is needed for proper treatment. Epidural steroid injections are commonly performed procedures for the relief of back pain. Epidural injection with a catheter has seen a 127% increase in Medicare patients in the decade 2000–2011 [5]. The purpose of using a catheter is twofold: (1) scar tissue, which prevents the steroid from reaching the nerve roots, is loosened or removed by either using a chemical agent like hyaluronidase or mechanically by injecting 10–20 mL of normal saline. (2) Drug delivery is targeted by positioning the catheter tip very close to the nerve root. In some studies, the use of a catheter has been proven to be more effective than regular epidural steroid injections in relieving leg pain in patients with post-laminectomy pain syndrome [6, 7]. The caudal epidural catheter technique is safe with a low incidence of complications. The true incidence of sheared or broken epidural catheters is unknown. The first report of epidural catheter breakage was published in 1957 [8]. In one study of 250 patients, the incidence of Racz catheter shearing was 1.2% [9]. There have been a number of case reports of epidural catheters shearing, knotting, or breaking [10, 11]. These complications are attributed to patient characteristics, insertion or removal technique, catheter type, or entrapment of the catheter by tissue. Catheters vary in tensile strength and breaking point. In one in vitro study, flexible wire-reinforced epidural catheters were shown to break more easily than non-wire catheters [12]. A damaged catheter is more prone to breakage [13]. Strength variability is attributed to the different material used in making catheters. The average force required to remove an epidural catheter in a clinical setting was found to be around 130–390 g with an upper limit of 1170 g [14]. Removal force is much lower than the force that breaks a catheter, which measured around 2000 g in a laboratory setting [12]. Often other factors are at play that necessitate the use of more than average force. These factors include coiling and knotting of the catheter, which offer much higher resistance to removal. Coiling and knotting are more likely with excessive threading of catheters in the epidural space. Excessive threading also can cause looping, which damages catheter integrity. The lumbar level is most vulnerable to coiling and knotting of a catheter. In one study, the mean distance before a catheter started to coil was 10 cm at the thoracic level versus 4.5 cm at the lumbar level [15]. During insertion, the needle tip can touch the bone and bend if force is used in order to walk up the bone [9]. Bending is more likely when accessing the epidural space at the thoracic or caudal level, damaging the epidural catheter both during placement and on removal. Catheters normally break when force is used to remove them; therefore, force should not applied on insertion or removal. Once the catheter is out of the needle, it is risky to rotate or move the needle because the needle tip is bound to shear the catheter. The catheter should be withdrawn into the needle before the needle is moved in any direction if at all. No manufacturer recommends catheter withdrawal into the needle, but a modern catheter can be withdrawn carefully and without resistance [10] (Fig. 17.2). 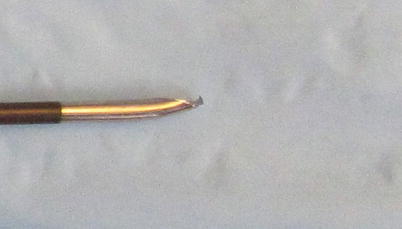 Bent tip when needle was used to walk of the bone while looking for interlaminar space
Management of a broken catheter is controversial. As catheters are biologically inert, catheters in asymptomatic patients are not retrieved unless they are present in the intrathecal space. Catheters in the intrathecal space produce a granuloma that puts pressure on the spinal cord, necessitating surgical removal [16, 17]. Epidural catheters also produce symptoms by direct pressure effect [18], by cyst formation [19], or by excessive scar formation that affect the nerves or spinal cord. Migration of a retained catheter segment from one epidural level to another level has not been reported. Retained catheter segments in the epidural space have caused symptoms requiring surgery. Based on several case reports, some have suggested removing all epidural catheters. Patients should be informed about the broken catheter, and the final decision about how to proceed should be made after consultation with the patient irrespective of the location of the broken piece of the catheter. The exact location of the broken piece may determine the action to be taken. If a catheter is not radiopaque, an X-ray may reveal its location. Also an X-ray cannot localize exact anatomical position of the sheared catheter piece even if the catheter is radiopaque. An MRI is unsafe for visualization of a catheter with a wire because of the migration of the catheter under magnetic force or the effect of heating. An MRI, however, has been used to localize a broken wire-reinforced catheter without harm to the patient [20]. Visualization with an MRI may not be possible if a catheter is surrounded by an isodense material. A CT without infusion is best at localizing a broken catheter and is the imaging modality of choice [21, 22]. Sheared catheters in the epidural space are not withdrawn if the patient is not symptomatic and he/she agrees to follow up observations [23]. However, it’s advisable to scan the catheter in 6 months to 1 year to evaluate the catheter in case it is inciting granuloma formation that can cause any pressure effects (Fig. 17.3).

Appendix 1: Factors That Cause Catheter Breakage