The limit of viability has been a moving target in the past several decades. With improvements in neonatal care and interventions that have reduced morbidity and mortality, there has been a shift in viability to earlier gestational ages. Assessment and management of a periviable gestation is one of the most complex problems encountered in an obstetric triage unit. While 0.5% of births occur before the third trimester, prematurity and its complications account for more than 40% of neonatal deaths (Ecker et al., 2016; Raju, Mercer, Burchfield, & Joseph, 2014). In 2014, a joint workshop of the Eunice Kennedy Shriver National Institute of Child Health and Human Development (NICHD), the Society for Maternal-Fetal Medicine (SMFM), the American Academy of Pediatrics, and the American College of Obstetricians and Gynecologists (ACOG) convened and defined periviability: 20 0/7 weeks of gestation through 25 6/7 weeks of gestation (Raju et al., 2014).

Births during these gestational ages are wrought with complex decisions for the obstetric and neonatal teams. These decisions are ethically challenging and, because the clinical situation often evolves quickly, decisions must be made expediently. Adding to this complexity is the heterogeneity in the literature regarding the types of interventions used, as well as the degree and consistency of resuscitative efforts. Institutions also vary greatly in the accessibility to tertiary neonatal care. These issues further complicate and add to the already difficult challenge of counselling parents.

Table 8.1 Survival to Hospital Discharge by Gestational Age at Delivery

Birthweight and gestational age are the most common factors used in predicting survival and severe morbidity. There are many more factors that have been associated with perinatal outcomes, such as fetal gender, plurality, location of delivery (Lasswell, Barfield, Rochat, & Blackmon, 2010; Lubchenco et al., 1989), use of magnesium sulfate, and use of antenatal corticosteroids (ACS). In an effort to help clinicians counsel patients at risk for periviable birth, the NICHD Neonatal Research Network created a tool that combines five variables (gestational age, birthweight, exposure to ACS, sex, and plurality). This tool can be found at neonatal.rti.org. Although this tool has some limitations, it is the most widely available resource at the current time (Ecker et al., 2016). Clinicians must check with the neonatology department to determine if there are site-specific estimates of survival, as these may be more accurate. Finally, a multidisciplinary approach to counseling with obstetricians, perinatologists, and neonatologists must be employed for these difficult and sensitive scenarios to ensure the parents receive consistent information. The most common reasons for pre- and periviable births are listed in Table 8.2 and will be reviewed individually.

Spontaneous preterm labor is defined as regular uterine contractions that cause a change in cervical dilation, effacement, or both, or initial presentation of regular uterine contractions and dilation of at least 2 cm (ACOG, 2016a). Traditionally, preterm labor was defined as occurring between 20 0/7 weeks of gestation and 36 6/7 weeks of gestation. Since the mechanisms causing preterm labor and delivery between 16 0/7 and 20 0/7 are believed to be similar to the mechanisms that exist beyond 20 0/7 weeks, the recommendations for treatment are likewise similar (Iams, 2014). Women will present with pain, ranging from intermittent menses-like cramping or pelvic pressure to painful uterine contractions. Vaginal spotting and an increase in vaginal discharge may be associated symptoms.

One of the most common risk factors for preterm birth is infection. As such, a thorough review of systems and documentation of the presence or absence of fever, chills, abdominal pain, purulent vaginal discharge, dysuria, flank pain, nausea, vomiting, and diarrhea is needed on presentation. The treatment of some infections, such as pyelonephritis, can halt preterm labor. Additional risk factors for preterm labor include abdominal trauma, placental abruption, history of preterm birth, multiple gestation, premature rupture of membranes, uterine fibroids, tobacco use, low body mass index, low socioeconomic status, and Black race (Goldenberg, Culhane, Iams, & Romero, 2008). 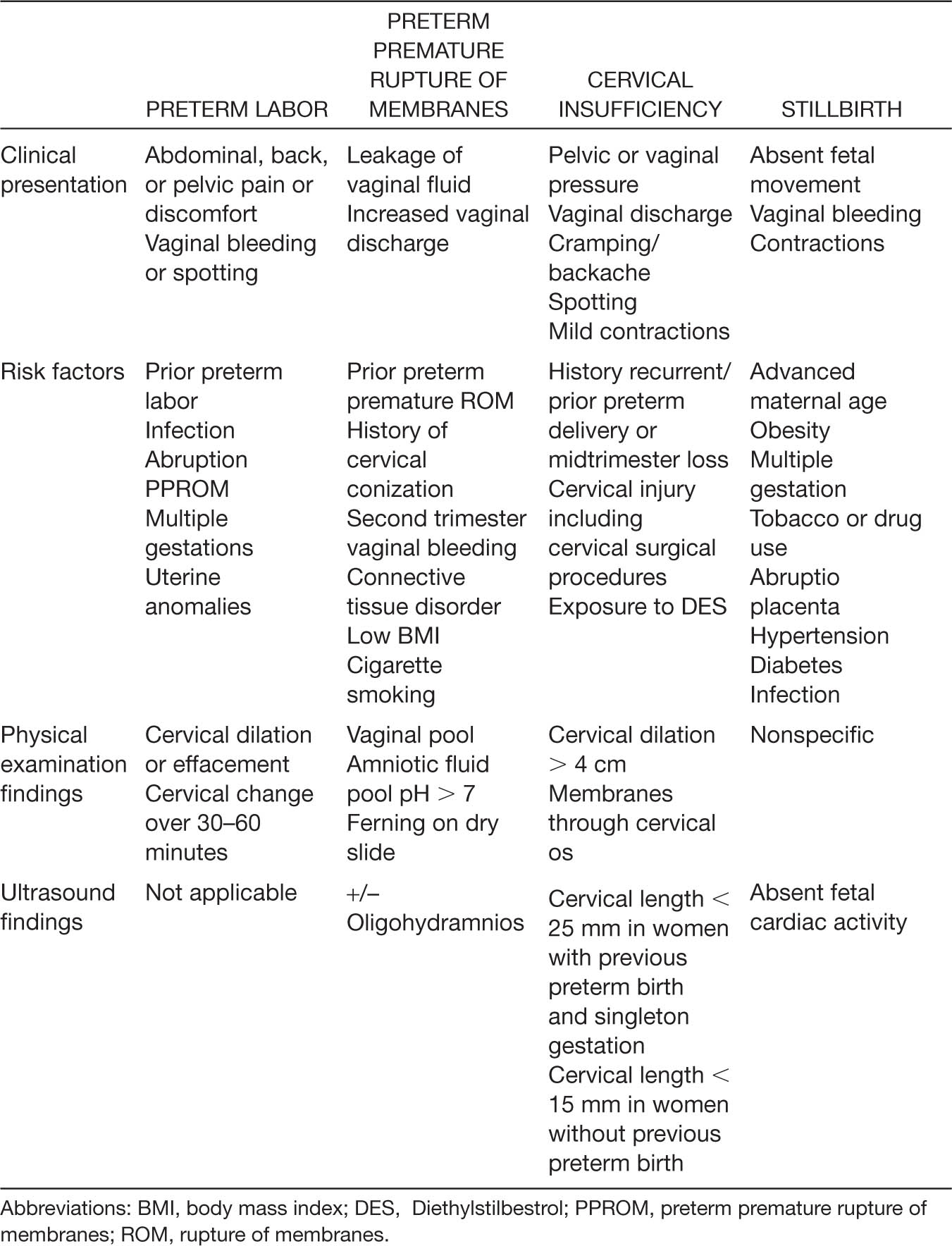 The diagnosis of preterm labor is made when there are regular contractions with active cervical change, or regular contractions and cervical dilation greater than 2 cm (ACOG, 2016a). Evaluation of vital signs and a physical examination are performed to rule out infection or other causes of preterm labor. If the gestational age is uncertain, biometry is performed so that a best gestational estimate can be attained, which will help guide treatment, management decisions, and counselling. Transvaginal cervical length monitoring is another tool that can be used in determining risk for preterm birth. However, this tool has been evaluated mainly for gestations after 24 weeks (Fuchs, Henrich, Osthues, & Dudenhausen, 2004; Ness, Visintine, Ricci, & Berghella, 2007). An example of a shortened cervix with funneling of membranes through the internal os is noted in Figure 8.1. 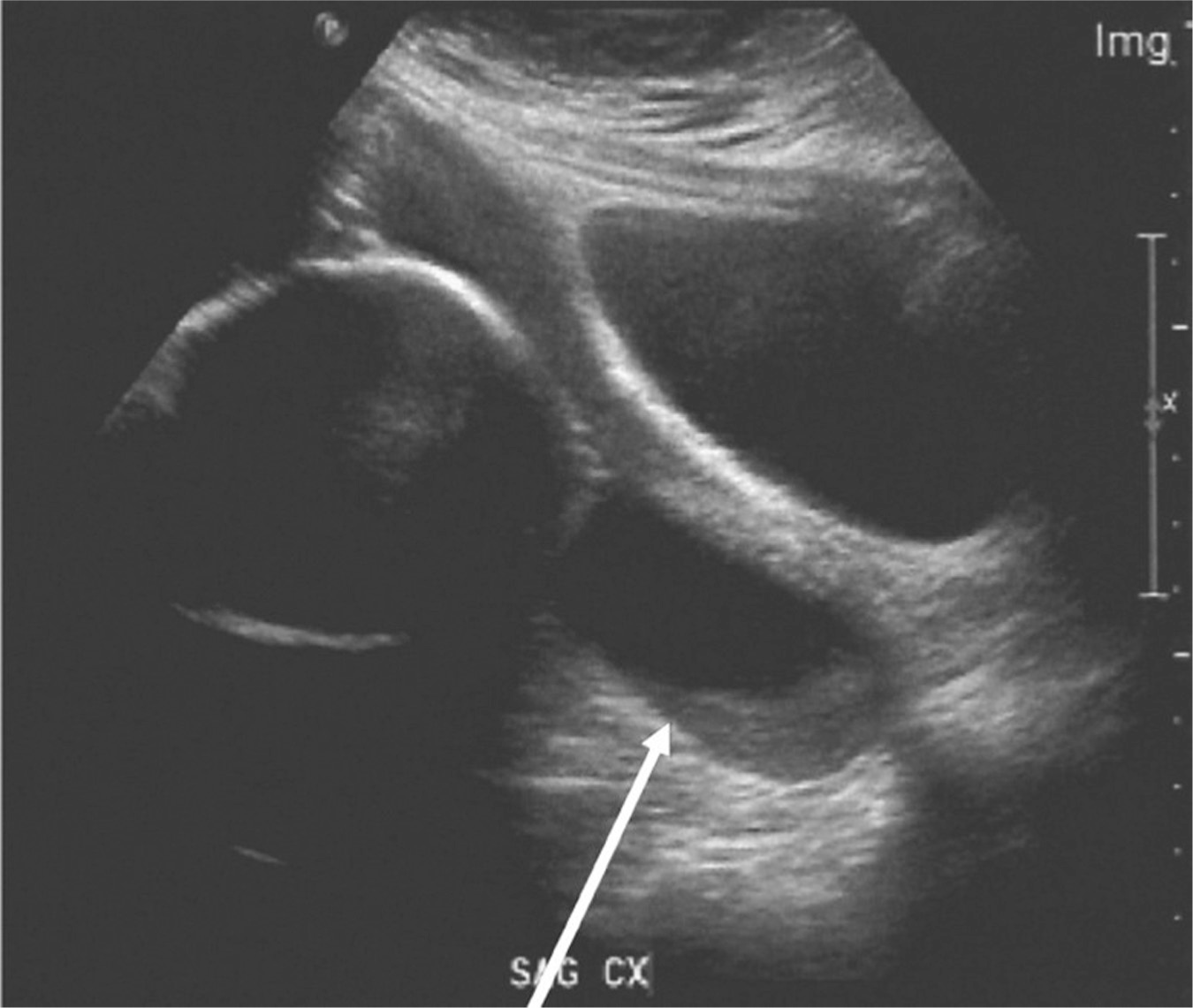 The differential diagnosis for labor in the periviable gestation includes obstetric/gynecologic causes such as preterm contractions (without cervical change or dilatation), round ligament pain, degenerating fibroids, ovarian cyst rupture, or torsion. Gastrointestinal, musculoskeletal, and genitourinary causes must also be considered. Infectious causes, such as cervicitis, pelvic inflammatory disease, cystitis, pelvic abscesses, appendicitis, and intra-amniotic infections, must also be ruled out.

If an intrauterine infection is confirmed, delivery must occur to prevent maternal sepsis. In the absence of an intrauterine infection, a pregnant woman can be offered expectant management and be allowed to progress through labor without intervention. Women who desire active management can be admitted to labor and augmented with prostaglandins, such as misoprostol. In both scenarios, women must be offered adequate pain control.

The use of antenatal magnesium sulfate has been shown to improve neurologic outcomes in premature infants (Conde-Agudelo & Romero, 2009; Costantine & Weiner, 2009; Doyle, Crowther, Middleton, Marret, & Rouse, 2009; Rouse et al., 2008). Although these studies have not included women with pregnancies prior to 24 weeks gestation, there is no increased risk of mortality (RR 1.04; [0.92–1.17]) when magnesium sulfate is given (Doyle et al., 2009). The ACOG and SMFM have recommended that it be used at 24 weeks of gestation and considered at 23 weeks of gestation.

While most tocolytic therapy has been shown to reduce the rate of preterm birth within 48 hours (Flenady et al., 2014; Neilson, West, & Dowswell, 2014), these studies have not been performed in women at periviable gestations. While a brief delay in delivery could promote the use of ACS, the use of tocolytics has not consistently shown improvements in neonatal outcomes (ACOG, 2016a). Both the ACOG and SMFM recommend tocolytics after 24 weeks of gestation and consider them at 23 weeks of gestation. The main purpose of tocolytics in this setting is to allow for the administration of ACS. 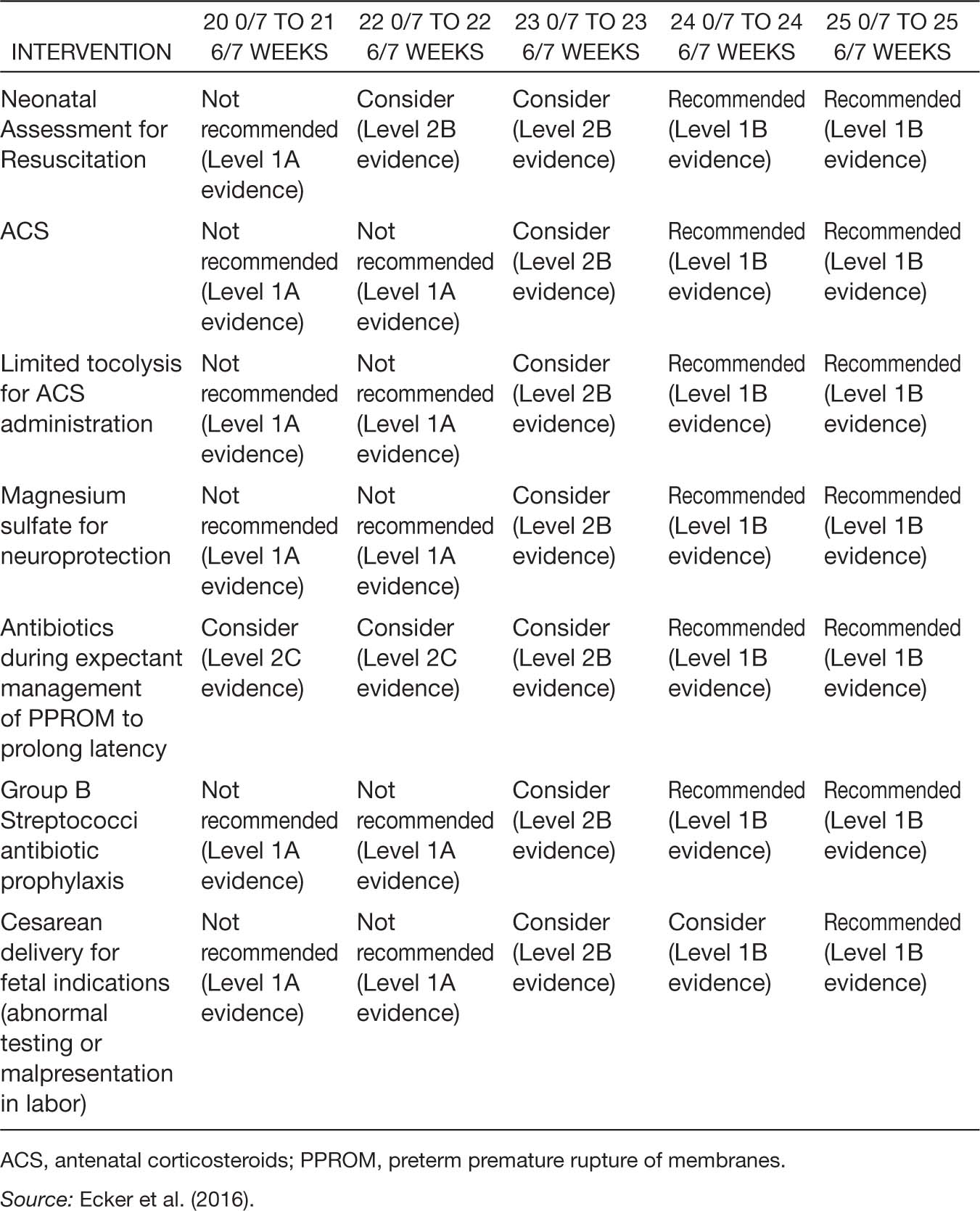 Cesarean delivery is not indicated in the periviable period as routine, as it has not been shown to decrease morbidity and mortality (Alfirevic, Milan, & Livio, 2013), or improve 2-year neurodevelopmental scores (Običan et al., 2015). In the setting of malpresentation, cesarean delivery may offer improved short-term survival and decreased morbidity, but at 6 months there is no difference in survival (Tucker Edmonds, McKenzie, Macheras, Srinivas, & Lorch, 2015). Cesarean 85deliveries at the periviable gestation frequently require classical uterine incisions. Because these incisions are associated with increased maternal morbidity, the mode of delivery is individualized for each patient depending on the clinical circumstances. Careful counselling regarding the risks of surgery compared to the limited benefit to the neonates must be undertaken, and cesarean delivery ought to be reserved only for maternal indications (e.g., placenta previa) prior to 22 weeks of gestation (Ecker et al., 2016).

A pregnant woman with preterm premature rupture of membranes (PPROM) may present with a variety of symptoms. She may experience a distinct gush of fluid from the vagina or give a history of several days of increased vaginal discharge and spotting. Intra-amniotic infection often precedes PPROM (Gabbe, Niebyl, & Simpson, 2016). Women with infections may also present with fever, nausea or vomiting, exquisite abdominal or pelvic pain, and/or foul-smelling vaginal discharge. The following risk factors are associated with PPROM: prior history of PPROM, history of second trimester vaginal bleeding, history of cervical conization or shortened cervix, amniocentesis, low body mass index, low socioeconomic status, cigarette smoking, connective tissue disorder, and multifetal gestations (ACOG, 2016b).

On speculum examination, rupture of membranes can be determined by the presence of an amniotic fluid pool in the posterior fornix. Amniotic fluid will have a pH of approximately 7 and, when left to dry on a slide, a ferning pattern will be seen through the microscope. During the speculum examination, the cervix is visualized to ascertain whether the cervix is dilated. Occasionally, a prolapsed cord or fetal part may be found protruding through the cervical os. Finally, the presence of purulent vaginal discharge or fever will raise the provider’s suspicion for septic abortion. If a speculum exam is negative or equivocal for ruptured membranes, a wet mount can be performed to evaluate for bacterial vaginosis, candidiasis, or trichomoniasis. If the status of amniotic membranes is unclear, the speculum examination can also be repeated in 1 hour to reevaluate the fluid for evidence of ferning.

Laboratory studies include a complete blood count (CBC) to evaluate for any leukocytosis suggesting infection and to establish a baseline hemoglobin level. Rh status is also collected and a urinalysis is obtained. In addition, a type and screen is obtained, as there is an association with PPROM and placental abruption, which can be associated with significant hemorrhage. A transabdominal ultrasound can be performed to measure the amount of amniotic fluid within the uterus, to confirm fetal viability, and to measure an 86estimated fetal weight, especially in the periviable setting or when due date estimates are uncertain.

In the second trimester, the differential diagnosis of vaginal discharge or leaking includes PPROM, cervicitis or vaginitis, or recent intercourse. Urinary tract infections or incontinence may also lead to the sensation of leaking fluid.

Preterm premature rupture of membranes (PPROM) is a devastating diagnosis for pregnant women to receive. Perinatal morbidity and mortality are commonly seen. Neonatal outcomes in the setting of PPROM may include pulmonary hypoplasia and fetal deformation, particularly when rupture occurs early in the second trimester or lasts more than 2 weeks. One study followed 152 expectant managed women with PPROM less than 24 weeks gestation (Manuck et al., 2009). Approximately 41% ended with a fetal demise, previable delivery, or neonatal death. Of the 59% who survived to hospital discharge, half of these experienced serious neonatal morbidity. Expectant management can be pursued as an outpatient prior to 23 to 24 weeks of gestation as long as the woman is counseled regarding signs of infection, labor, and placental abruption (ACOG, 2016b).

In women who are proven to have ruptured membranes, yet are hemodynamically stable and without evidence of infection, there is no urgency to move toward an immediate management decision. Time is allowed for the mother and partner to have all questions addressed, speak in private, and process the importance of what has occurred. Management options include expectant management, induction of labor, or dilatation and evacuation (D&E). Expectant management is offered only to those women with PPROM prior to viability who demonstrate no evidence of infection or significant hemorrhage from abruption. Expectant management, however, does carry the risk of delivery outside a clinical facility, infection, and, rarely, coagulopathy and hemorrhage. Therefore, women may be managed in the outpatient setting only if they are able to return for emergency care quickly. Active management requires consultation by experienced obstetric providers at appropriately equipped facilities.

Latency antibiotics have been shown to increase pregnancy prolongation and reduce rates of short-term neonatal morbidities (Kenyon, Boulvain, & Neilson, 2013). Although there are no data specific to the periviable period, broad spectrum antibiotic coverage to prolong pregnancy can be offered to all women with PPROM who are being expectantly managed at 24 weeks of gestation and beyond, and can be considered after 20 weeks of gestation (ACOG, 2016b).