Local and Regional Anesthesia in Pediatrics 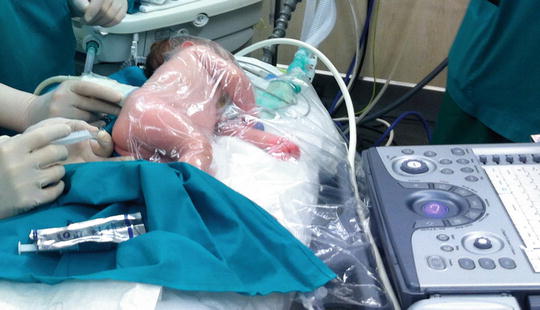 Transparent blanket covering an infant during an ultrasound-assisted caudal block 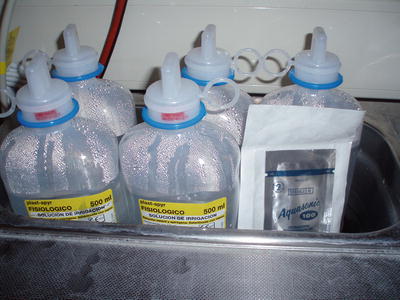 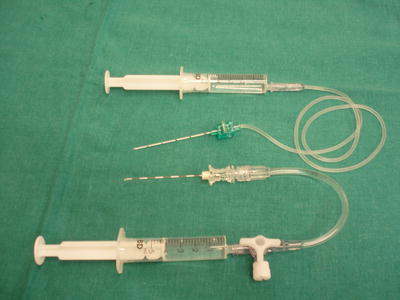 Needles should be of appropriate tip, gauge, and length, and injection extension tubes are recommended
It is the present author’s opinion that regional blocks are indicated in all children without a formal contraindication. True contraindications include coagulopathy, sepsis, or infection at the needle insertion site, true local anesthetic allergy, and refusal by the child or parents. For central blocks, relative contraindications are myelomeningocele, ventriculoperitoneal shunt, and progressive neurologic disease. Risks and benefits in these patients should be carefully considered on an individual basis. For peripheral nerve blocks , a relative contraindication may be the risk of compartment syndrome. In this author’s personal opinion, analgesic regional blocks may be performed only if the surgical team agrees and provided that a dense motor block is not achieved. In these cases, if the surgery has been done with a block, it is imperative to wait for a partial recovery of the motor block (if any) before starting a continuous infusion of local anesthetic in the postoperative period. Any breakthrough or pain out of proportion to that expected should be carefully assessed before increasing the local anesthetic infusion or adding systemic analgesia. Early intramuscular pressure measurement should be available in the facility if regional blocks are to be performed in higher risk patients .
Both central and peripheral blocks should be performed under strict aseptic conditions. Anesthesiologists should follow their hospital’s protocols regarding the use of chlorhexidine or povidone.
In a caudal block, direct visualization of the location of the needle tip with ultrasound is recommended. The spread of the local anesthetic while injected should then be assessed. In an epidural blockade, air loss of resistance techniques should be avoided in pediatric patients because children can develop a life-threatening venous air embolism from small quantities of air, especially in presence of patent foramen ovale (up to 50 % in children younger than 5 years of age). An ultrasound-assisted technique is recommended: the epidural space is found by loss of resistance to saline and subsequently incremental doses of local anesthetic are administered through the catheter while the spread is assessed under ultrasound imaging. As no method of test dosing is infallible, incremental and slow injection is a critical safety measure whenever large volumes of local anesthetics are injected in children. Fixation is to be done with a specific transparent fixation device to allow observation of the catheter or possible signs of infection. Fixation should only be changed if strictly necessary. Catheters should be removed and the tip cultured if the child develops fever >38 °C. Most epidural catheters for postoperative pain relief can be removed after 48–72 h but if the catheter is to be kept in place for more than 48 h tunneling is recommended.
Placement of peripheral nerve catheters is now common in pediatric regional anesthesia [73–77]. Continuous peripheral nerve blocks should be done under strict aseptic conditions and in this author’s opinion mainly for major surgery or pain/rehabilitation therapy. Complications consequence of the technique should be avoided by a very careful procedure performed by skilled pediatric anesthesiologists. Complications derived from infusions and catheter’s care need extensive team training. Personnel from the anesthesia pain team should inspect the catheter daily through a transparent fixation dressing (but only change the dressing if strictly necessary) and control the infusions .
Because drug errors are higher in centers where fewer catheters are managed in the wards, the author of the present chapter recommends thorough staff education programs and medical support to the ward personnel before catheters are managed in a the ward. Intravenous lipid emulsion resuscitation guidelines and intramuscular pressure measurement devices should be available in all locations where continuous local anesthetics are used.