Epidural electrode implantation scar at midline thoracolumbar junction. The superior edge of the wound is dehisced with thick purulent drainage. A deep pocket of pus was identified on closer inspection, and the contaminated electrode could be visualized

Clearly, a wound infection has occurred, but you suspect an epidural infection given her worsening back pain and new neurologic findings. While in the office, you have her blood drawn for analysis and culture:

The MRI shows an enhancing fluid collection in the posterior epidural space at the T11–T12 level. See Figs. 39.2, 39.3, 39.4, and 39.5 for examples of epidural abscesses on MRI. Neurosurgery is consulted, and they agree that the abscess necessitates surgical drainage. Culture samples of the abscess material return with abundant gram-positive cocci. Given the patient’s risk factors for methicillin-resistant Staphylococcus aureus (MRSA), (recent surgery, works in an inpatient healthcare facility), vancomycin is initiated to treat the infection until antibiotic sensitivity testing is completed. The following day, she is afebrile, and she remains neurologically intact, and urinary retention symptoms improve. Blood cultures are found to be positive for MRSA with sensitivity to vancomycin. She is hospitalized for an additional 4 days during which her glucose level is stabilized and serial ESR and CRP continue to decrease. A PICC line is placed, and she is sent home for an additional 5-week course of vancomycin. Despite this nearly catastrophic complication, the patient requests that you reimplant the SCS again, as she had profound pain relief and improved function during her trial and immediately after the initial implant. 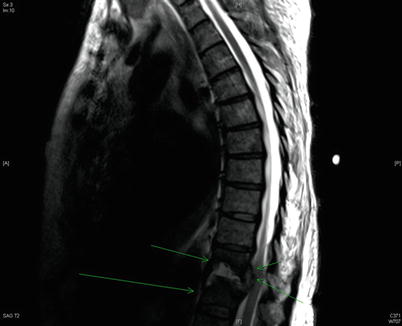 T2 sagittal MRI image of a 78-year-old female with a large ventral epidural abscess at the T11–T12 level, surrounded by green arrows. This extensive infection extends into the vertebral body and intervertebral disc. The patient, in contrast to the patient presented in this case study, presented with profound neurologic deficits 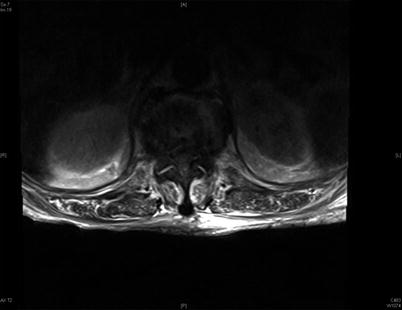 T2 axial image of this same patient. The spinal canal is essentially obliterated with abscess at this level 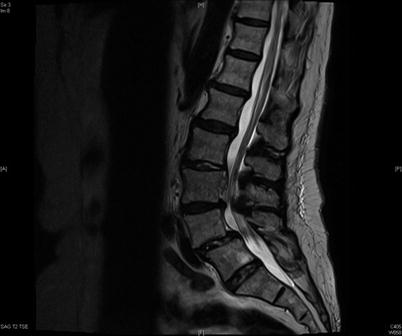 A 69-year-old female with known L45 anterolisthesis presented with worsening back and right thigh pain following an LESI at L34. This T2 sagittal image confirms a ventral epidural fluid collection consistent with an epidural abscess 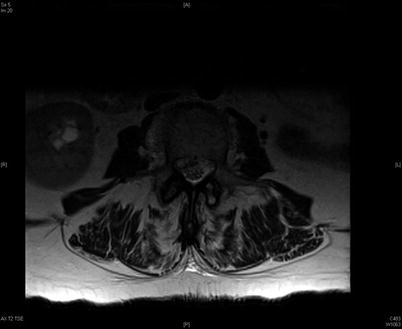 T2 axial image at the L3 level in this same patient. A fluid collection in the ventral epidural space on the right is seen

Spinal epidural abscess (SEA) following SCS implantation is a rare but life-threatening complication that will require surgical explantation of the device, evacuation of the abscess, and parenteral antibiotic therapy. Early diagnosis is essential to limit the neurologic compromise that can occur in these cases. In 1948, Heusner et al. classically described four distinct stages of SEA: Stage 1, which includes back pain and tenderness to spine palpation; Stage 2, in which spinal nerve root findings, radicular pain, nuchal rigidity, and hyperreflexia are seen; Stage 3, in which sensory findings, motor weakness, and bladder or bowel dysfunction are found; and finally Stage 4, paralysis [1]. In reality, the progression of symptoms may not be so linear and concrete. Recent studies have shown that the classic triad of “back pain, fever, and neurological deficit” is actually present in only 10% cases of SEA, but when present, it predicts poor outcomes [2].
In the case presented here, the diagnosis is straightforward, but in cases of spontaneous SEA in the absence of a recent spinal procedure or recent surgery, severe back pain with leukocytosis is the most common presenting scenario. A chief complaint of back pain is present in 70–95% of patients with SEA [2–4]. Fever was seen in about 20% of cases in one 10-year retrospective study [2] of patients with SEA and in 54% of cases in another [3]. Motor deficits may be present in 30% of cases of SEA, and bladder dysfunction or frank paresis is seen in about 25% of cases [5]. The mortality rate from SEA is less than 10% and is usually related to overwhelming sepsis or meningitis as a result of the abscess [3, 5, 6]. Approximately 50% of those who are treated for SEA are left with permanent neurologic deficits, including 15% with paresis or complete paralysis [7]. Motor deficits at the time of diagnosis highly correlate with permanent residual motor deficits after treatment [3].
The most common pathogens found in blood and wound cultures are Staphylococcus aureus and Streptococcus species [4]. MRSA was found in 20% of cases in a recent meta-analysis of SEA [4]. Cost of treatment is high. In one recent analysis, the mean total charges incurred for SEA inpatient treatment was $160,000 [5]. Risk factors for rapid clinical deterioration and poor outcomes include a history of diabetes mellitus, C-reactive protein >115, WBC > 12, age > 65, positive blood cultures, and the presence of MRSA [4].
The causes of SEA include hematogenous spread, direct inoculation, or contiguous spread of bacteria from a primary source. Skin and soft tissue infections are common sources of hematogenous spread of bacteria, in addition to urinary tract and respiratory tract infections. The vertebral column is highly vascularized, so hematogenous spread to this region is not unlikely. In this case, dehiscence of the surgical incision from a wound infection may have allowed spread of bacteria into the deeper tissue layers or contiguous spread of bacteria from a wound infection into the epidural space. Optimally, a wound check within 1 week after surgery and better patient vigilance could have mitigated this case, as a superficial wound infection after SCS can usually be treated successfully with antibiotics and not require explantation of the entire SCS system. Alternatively, poor aseptic technique or contamination of the introducer needle or electrode at the time of trial or permanent implantation may have been causes, but direct inoculation would likely cause abscess formation and clinical symptoms more immediately after implantation. In patients with diabetes and a history of smoking, it may be best to stage the percutaneous trial and allow complete healing of the skin prior to proceeding with the permanent implantation of an SCS system in the same region. In one case report, a patient developed back pain and an epidural abscess 3 days following a percutaneous SCS trial [8] and required surgical drainage. In most spontaneous cases of SEA, the bacterial infection is unimicrobial.
The incidence of SEA with SCS implantation is not well studied and is limited to case reports [8, 9]. In a recent retrospective analysis of 131 patients with 142 SCS or programmable pumps at a single institution by Engle et al., the overall infection rate was 2.8% in the first 12 months following implantation. In two of the 59 SCS systems implanted (3.4%), a postoperative infection occurred. In all cases in this series, the infections were at the IPG or pump site, and there were no cases of epidural abscess [10]. Longer operative time was an independent risk factor for these infections. Kumar et al. reported an 8% incidence of infection or wound breakdown following SCS implantation [11]. Follett et al. reviewed medical device reports from 2000 to 2002 from a single SCS manufacturer and analyzed 114 cases of infections related to SCS implantation. In all cases, the indication for SCS implant was non-cancer pain, and 38% of the patients had a medical condition that was a risk factor for increased infection risk. The majority of the infections occurred at the IPG pocket site. Wound cultures were positive for a Staphylococcus species in 48% of cases; a Pseudomonas species was identified in 3%; wound cultures were negative for bacterial growth in 18% of cases [12]. Infections were most likely to occur within the first month following surgical implantation, and in 91% of cases, the infection resolved without complications after treatment [12]. In another large, 20-year literature review of SCS publications by Cameron et al., an infection rate of 3.4% in 2972 SCS procedures was seen [13]. One case of psoas abscess related to implantation of an epidural electrode has also been described [14].

Patients with DM and poorly controlled glucose levels are more prone to wound infections, especially with spine surgery [15]. DM is the most common medical morbidity seen in patients with SEA [4]. In a recent meta-analysis of 12 SEA studies, 27% of patients with SEA were diabetic [4]. Other risk factors for SEA include renal failure, liver failure, recent spinal procedure or spinal instrumentation, an immunocompromised or debilitated state, poor nutritional status, intravenous drug use, alcoholism, smoking, and chronic steroid use [4, 16]. Many of these risk factors can be addressed, mitigated, or otherwise controlled preoperatively prior to the implantation of an SCS system with proper screening and patient education. Advanced age and pulmonary disease were independent risk factors of poor outcomes after SEA was diagnosed in an analysis by Schoenfeld et al. [5].
Chronic pain patients may be more prone to MRSA infections, related to exposure to this bacteria during multiple hospitalizations or surgeries. In this case, the patient may have been a MRSA carrier since she worked in an inpatient rehabilitation facility and was in contact with chronically ill patients. In situ MRSA inoculation at the time of surgery and a contiguous MRSA wound infection are other possibilities.
Surgical technique and compliance with infection control procedures to prevent surgical site wound infections have strong effects on infection risk. Surgical site infections are known to occur in 2–5% of all surgical cases, regardless of location [17]. The Centers for Disease Control and Prevention recommends that intravenous antibiotics be administered before surgical incision, so a bactericidal concentration of the drug is present when the skin is incised. The North American Spine Society has developed evidence-based guidelines on the administration of antibiotics for spine surgery and recommends a single-dose broad-spectrum coverage of gram-positive organisms be given prior to skin incision [18]. Diabetes, smoking, bed confinement, blood glucose levels above 120 mg/dL, longer lengths of incisions, and longer hospital stays are all risk factors for surgical wound infections following spine surgery [15]. A recent survey of over 500 SCS-implanting physicians assessed the self-reported compliance rates for surgical infection control practice recommendations (i.e., CDC, SCIP, etc.). Overall, compliance rates with these standard recommended practices in this cohort were low. Weight-based antibiotic dosing, hair removal strategies, double gloving, surgical dressing, skin antiseptic agent selection, and postoperative continuation of antibiotics were specific areas of common noncompliance [19]. Updated recommendations for the control of surgical site infections should be reviewed by all SCS implanters [20].
Only gold members can continue reading. Log In or Register to continue