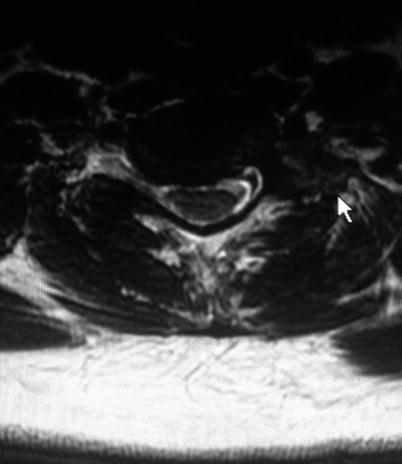 Sagittal view of the cervical spine showing a disk herniation at the C6–C7 disk level with moderate compression of the right C7 nerve root (Courtesy of Dr. M. De Pinto)

The patient has hypertension that is managed with beta-blockers. A focused physical examination shows mildly decreased sensation along the right C7 nerve root distribution without motor and tendon reflexes abnormalities. He reports that pain is affecting the quality of life and impairing his ability to work. He has undergone a surgical evaluation and referred to the pain clinic for a right C7 transforaminal epidural steroid injection. Risks and benefits of the procedure have been discussed with the patient and his family. The plan is to start an intravenous (IV) line and provide a small amount of sedation with fentanyl and midazolam. The injection will be performed with the patient in the supine position, under fluoroscopic guidance. A 25-gauge 2.5″ Quincke spinal needle is placed in the desired position, but aspiration is positive for blood. The needle position is adjusted, and the injection of a small amount of contrast medium reveals an appropriate flow along the right C7 nerve root with negative aspiration for blood. Two milliliters (mL) of lidocaine 2% mixed with 2 mL of a solution containing a particulate steroid (betamethasone—Celestone 6 mg/mL) are injected in 1 mL aliquots. The needle is removed, and the patient is transported back to the recovery room. Upon arrival in the recovery room, 5 min after completion of the procedure, the patient becomes agitated and confused. Vital signs show a blood pressure of 141/95, heart rate 94, respiratory rate 7 breath/min, and O2 saturation 97% on room air. During the following 10 min, the vital signs deteriorate, and the patient becomes unresponsive. A code blue is called. He is intubated and transported to the emergency department. A brain CT scan obtained in the emergency room reveals the presence of a large hemorrhage around the brainstem extending through the midbrain and pons into the lateral ventricles with obstructive hydrocephalus. The gravity of the clinical condition is immediately evident and explained to the patient’s family. Treatment is initiated but does not result in improvement of the clinical conditions. After consultation with the patient’s wife and family, support is withdrawn 2 days after the injection. The patient expires soon afterward.

Cervical transforaminal epidural steroid injections (CTESIs) are used in the management of radicular pain and may restore function in patients with cervical radiculopathies [1–3].
The main indication for CTESIs is the presence of radicular pain that:

The release of nociceptive and inflammatory mediators (e.g., nitric oxide (NO), prostaglandin E2 (PGE2), interleukin 6 (IL-6), phospholipase A2) around disk herniations and areas of spondylosis can lead to chemical radiculitis and nerve root irritation. Compression of irritated nerve roots results in prolonged firing of the nerve fibers and consequent pain production [5, 6]. Moreover, dorsal root ganglions (DRG) can fire repetitively even with minimal compression and in the absence of irritation [7].
Corticosteroids suppress inflammation, limit the ectopic discharge of DRGs and injured nerve fibers, and decrease phospholipase A2 activity [5, 6]. In addition, the combination of local anesthetic and steroid has been reported to have anti-inflammatory effect on nucleus pulposus-induced nerve injuries [8]. Data in an animal model also have shown that the injection of lidocaine increases intra-radicular blood flow, thereby decreasing ischemia-like pain that may be induced by the compression of the nerve root [9].

Cervical epidural steroid injections are performed as part of a conservative approach in patients with radicular pain. However, the evidence suggesting that these procedures may be effective long term is minimal and of low quality. A paper published in 2014 [10] has provided a systematic review and comprehensive analysis of the literature data available on the topic. Most of the studies published are observational and retrospective in nature, include a limited number of patients, and have some methodology flaws [1, 11–16]. No randomized, double-blind, placebo-controlled study is included in this review, even though a few of them are prospective in nature and are the ones providing the most compelling evidence of the effectiveness of CTFESIs for relief of radicular pain and avoidance of surgery [17, 18]. The authors conclude that:

CTESIs have been associated with catastrophic and devastating complications. Numerous case reports have been published reporting on injuries following a CTESI that eventually led to death or permanent neurological damage including:

In other published case reports, the injury occurring at the time of the injection did not lead to permanent damage, and the patients made a full recovery; in some cases a long recovery time was necessary [29–36].

13.2.4 Anatomy of the Vertebral Arteries as They Relate to Cervical Transforaminal Epidural Steroid Injections

A careful review of the literature regarding risks and complications of CTESIs seems to suggest that the vertebral artery and the small radicular arteries supplying blood to the cervical spinal cord are at risk of being penetrated and injected into while performing these procedures.
Typically the vertebral arteries (VA) arise from the subclavian arteries and enter deep to the transverse process at the level of the sixth cervical vertebrae (C6) or occasionally (7.5% of cases) at the level of C7. They then proceed superiorly in the transverse foramen of each cervical vertebra. Once they have passed through the transverse foramen of C1, they travel across the posterior arch of C1 and through the suboccipital triangle before entering the foramen magnum. Inside the skull, the two vertebral arteries join to form the basilar artery at the base of the pons. The basilar artery is the main blood supply to the brainstem and connects to the circle of Willis and potentially supplies the rest of the brain if there is compromise to one of the carotid arteries [37] (Fig. 13.3). 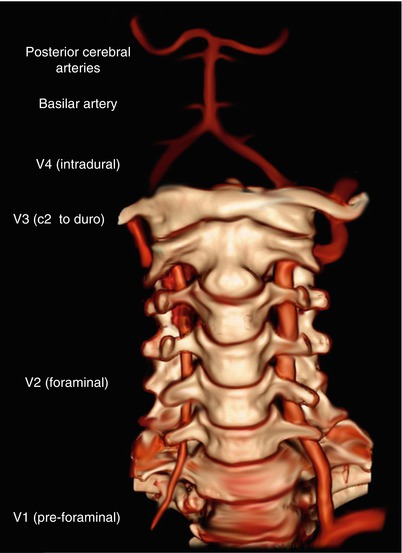 Anatomy of the vertebral artery (Courtesy of Dr. F. Gaillord—Reprinted with permission)
Clinically the VA is described as having four discreet segments [38]. The first segment (V1) begins at the origin of the VA from the subclavian artery and extends to the level of the C6 transverse process. The second segment (V2) runs in the transverse foraminal column from C6 to C2. The third segment (V3) extends from the C2 transverse foramen to the foramen magnum, and the fourth segment (V4) runs from the foramen magnum to the formation of the basilar artery (Fig. 13.3).
The majority of CTESIs are performed along the V2 segment of the VA, which typically enters the C6 foramen and remains within the protection of the bony column of the cervical transverse processes throughout its length [39]. The safe target area for CTESIs, described in relation to the normal pathway of the vertebral artery, is located in the posterior aspect of the neuroforamen. To avoid cannulating the VA, interventionalists are taught to direct the needle, using an oblique view, toward the superior articular process while maintaining a posterior approach. After touching periosteum, the needle is directed slightly anteriorly and advanced medially into the neuroforamen taking care not to pass beyond the midpoint of the articular pillar in the anteroposterior (AP) view (Fig. 13.4) [40]. In a patient with normal anatomy, these guidelines should keep the needle from puncturing the exiting nerve root, vertebral artery, or dural sac (Fig. 13.5). However, studies performed on cadavers and in living subjects show that anatomical anomalies of the VA, anomalies that place an arterial segment posteriorly into the CTESI target zone, can occur in 20% of patients [41]. The VA may lie in the posterior foramen and within 2 mm of the ideal needle location in at least one location in 29% of patients. The more commonly affected levels are C3–C4, C4–C5, and C5–C6. Although possible, it is less common for the VA to be located posteriorly at the C6–C7 level (Fig. 13.6). The VA proximity to the typical target location for CTESIs correlates with the severity of foraminal stenosis and loss of disk height. It is possible that in the case that we describe, the patient may have had such an anomaly that was not identified before the procedure was performed. 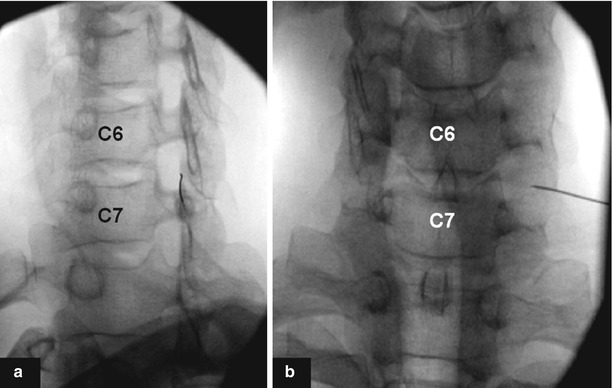 (a) Needle directed toward the anterior half of the superior articular process in the most dorsal aspect of the intervertebral neuroforamen . (b) Tip of the needle to lie opposite the sagittal midline of the articular pillars on AP fluoroscopic view (Courtesy of the Spine Intervention Society and Dr. P. Dreyfuss—Reprinted with permission) 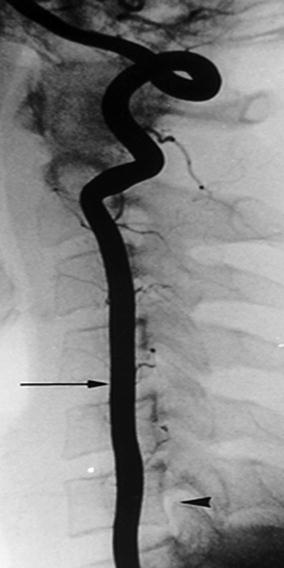 Outline of the vertebral artery (left arrow) and its relationship with the cervical neuroforamen (right arrow) (Courtesy of Dr. J.N.Vallee—Reprinted with permission) 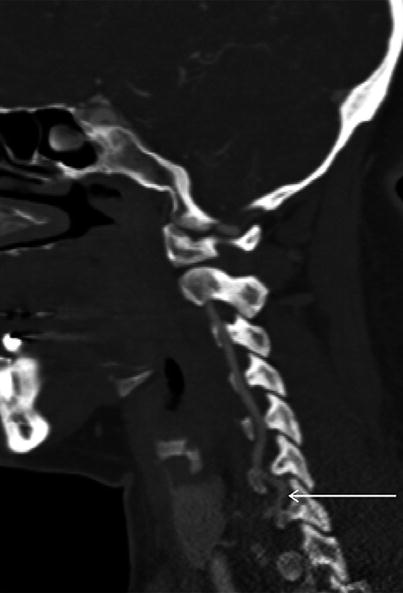 Vertebral artery loop in the posterior foramen near the location of the needle placement for CTESIs (Courtesy of Dr. W.J. Beckworth—Reprinted with permission)
Physicians should be cognizant of this and evaluate the T2 axial MRI images to check the location of the VA before performing CTESIs [42].

Cervical spinal cord blood supply is provided by the radicular arteries. Eighty percent of the radicular arteries in the cervical region originate from the vertebral arteries, whereas the remainder originates from deep cervical, superior intercostal arteries, and the ascending cervical artery. The ascending and deep cervical arteries are formed by branches of the subclavian artery and anastomose with the vertebral artery posterior to the spinal nerve (Fig. 13.7) [43–45]. Cadaver studies show that these arteries are located within the cervical intervertebral foramina [46, 47]. They tend to enter the foramina just inferior to the exiting spinal nerve and follow a tortuous course along the inferior and anterior aspect of the spinal nerve until they penetrate the dura to join the anterior or posterior spinal artery. The arteries (vertebral, deep cervical, superior intercostals, or ascending cervical) from which the radicular arteries originate determine the depth within the intervertebral foramen at which the artery will first be encountered. Branches that arise from the vertebral artery lie over the most anteromedial aspect of the foramen, whereas those that arise from the deep cervical, superior intercostals, or ascending cervical arteries traverse the entire extent of the foramen.

Blood supply to the cervical spinal cord (Courtesy of Mayo Foundation for Medical Education and Research—Reprinted with permission)
The location of these arteries within the cervical intervertebral foramen in the near proximity of the area where the needle is usually placed for CTESIs may in part explain why ischemic neurologic events occur while performing these injections. Available studies support the current technique of fluoroscopic or CT-guided needle insertion into the posterior aspect of the intervertebral foramen, with the needle tip remaining over the anterior portion of the superior articular process (SAP) , as the radicular arteries are most commonly located inferior and anterior to the spinal nerve roots (Fig. 13.4) [40]. However, anatomic variations in the origin and locations of these critical vessels are wide, and even with strict adherence to this technique, a properly placed needle could penetrate a radicular artery.
Thus, intravascular needle location must be ruled out by injection of a small volume of radiographic contrast under real-time fluoroscopy with digital subtraction angiography (DSA) enhancement before a steroid solution is injected (Fig. 13.8) [48–50]. 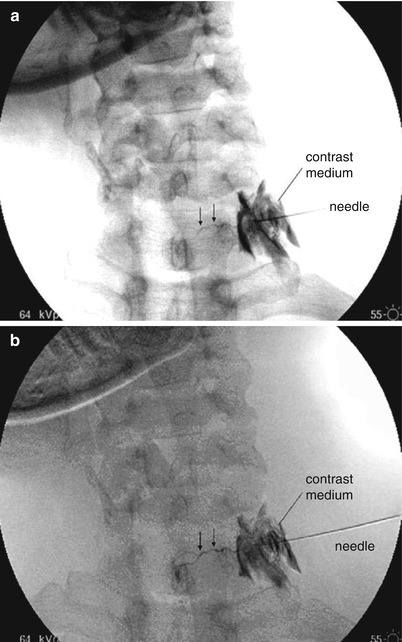 The needle lies in the C6–C7 neuroforamen no further medially than its lateral midpoint. The arrows indicate the artery that was filled which passes medially to the spinal cord. (a) Conventional fluoroscopic exposure. (b) Digital subtraction angiography (Courtesy of Dr. R.M. Baker—Reprinted with permission)

The depot steroid preparations used for epidural injections contain significant amount of large particles that are a factor contributing to microvascular “sludging” and subsequent occlusion and ischemia in the event of an inadvertent intravascular injection.
The size of the particles measured is enough to occlude capillaries, metarterioles, and, in some cases, arterioles and even arteries [21].
Only gold members can continue reading. Log In or Register to continue