Bilateral Sequential Lung Transplantation: What the Anesthesiologist Needs to Know About the Surgical Approach 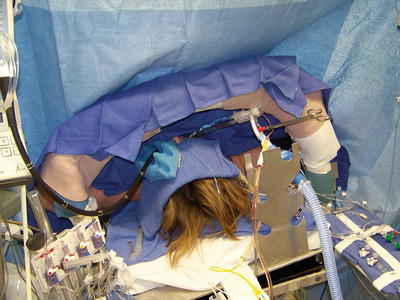 Access to the endotracheal tube and central access for anesthesia care team can be limited by patient positioning. Upper limb arterial and venous accesses are not reliable during this position 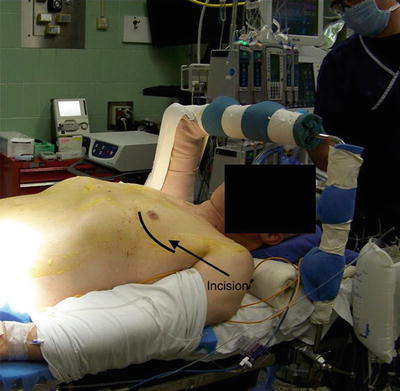 Once the incision has been made with the knife at the level of the skin, the procedure involves dissection using electrocautery through the soft tissue, muscle division, and entry into the thorax. This is typically done simultaneously with an operator on each side. For the typical transplant with obstructive disease, we enter via the fifth interspace. For restrictive disease, we enter the 4th interspace. Almost immediately there will be a need to deflate one lung to facilitate the dissection. The ability to do this expediently is of great utility. The bronchial balloon may inadvertently herniate out of the left mainstem bronchus and the anesthesiologist is called upon to quickly make the diagnosis in the context of a lung that will no longer deflate. The ability to use the fiberoptic bronchoscope and reposition the tube when necessary (often underneath the sterile drapes) is expected (Fig. 8.6). There is an increased risk of parenchymal injury when lungs cannot be deflated particularly in the context of dense adhesions. These, in combination, may spark a fire, which can have serious, often lethal consequences. To further minimize risk of fire, we flood carbon dioxide into the operative field throughout the case. Further, when the airway is open, we reduce fraction of inspired oxygen (FiO2) to room air levels. Unstable arrhythmias may be frequently encountered requiring cardioversion via external or internal means. Careful attention to the patient’s body temperature throughout the case is also prudent and warming via standard means should be ongoing throughout the procedure. 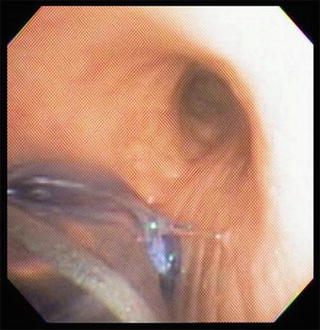 Endobronchial cuff herniation during surgical manipulation
Once the hilar structures have been exposed, the airway and vascular structures (pulmonary artery, superior pulmonary vein, and inferior pulmonary vein), on each lung are sequentially isolated and prepared for stapling. Once the structures have been isolated, the surgeon may decide to use cardiopulmonary bypass depending on the stability or pathophysiology of the patient. This is tested by snaring the PA using a tourniquet and monitoring the vitals for 5–10 min thereafter (Fig. 8.7). The tip of the PA catheter should be pulled into the proximal PA prior to snaring or clamping. The team monitors for escalating PA pressures and an increase to greater than two-thirds of systemic pressure is an approximate indicator that cardiopulmonary support is required. Right ventricular function should be monitored by TEE during this time also. Once the decision to go “on pump” has been made, the standard options include central (ascending aorta to right atrium) or peripheral cannulation (femoral vessels). 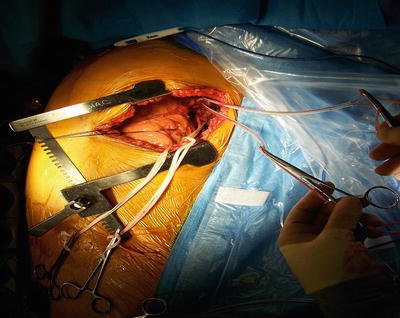 Snaring of pulmonary vessels for decision making whether to use cardiopulmonary support for lung transplantation procedure
The use of cardiopulmonary support adds the perfusionist to the operative equation. The three clinical teams now collaborate with each other with the perfusionist directing the rate of perfusion and the extent of anticoagulation with serial activated clotting times (ACTs) . The anesthesiologist administers the initial heparin dose, but thereafter the perfusionist may administer the heparin directly into the circuit. The perfusion team also guides volume status and optimizes hematocrit and the electrolyte milieu, replacing fluid volume as necessary using both blood products and cell-saver, depending on the amount of blood loss and the set-up of the circuit. On full bypass, typically about 4–5 l/min, the anesthesiology team may be requested to withhold ventilation entirely, deflating both lungs for an extended duration so as to facilitate dissection and implantation. Despite the delegation of perfusion to the perfusionist, the use of bypass still dictates vigilant monitoring by the anesthesiology team. Drugs administered, mixed venous gas patterns, cerebral oximetry, oxygen saturation, hemoglobin, extent of paralysis, number of twitches, mean arterial pressures, and PA pressures still require close monitoring. The surgical team benefits from the use of bypass as it allows for a decompressed field in which to perform the recipient pneumonectomy and the transplantation. The team should be prepared for any significant blood loss during the vascular dissection.
Recently, our group has used central or peripheral extracorporeal membrane oxygenation (ECMO) as a means of cardiopulmonary support [3]. This has been quite successful to date with reduced bleeding complications; however, the nuances of using ECMO must be familiar to all members of the team as there is no way to give volume back to the patient and the circuit must remain free of entrained air. Newer perfusion circuits allow one to switch from ECMO to full cardiopulmonary bypass without having to exchange the circuit. Indeed this remains an active area of investigation for the future.
During the pneumonectomy, each PA and PV is divided using multiple firings of the reticulating endoscopic (EndoGIA) stapler. The bronchus is the last structure to be divided and this is done free-hand using a scalpel. At this particular juncture, communication between the surgery and anesthesia teams is crucial because once the airway is divided, the surgical field is exposed to oxygen and inhalational gases. During this portion of the case the surgery team may request that the endobronchial tube be withdrawn to avoid severing it with the blade. The FiO2 should be decreased to 30 % (or less) and suction applied to the ipsilateral side of the double lumen tube so as to minimize the entrainment of high flow oxygen with ongoing use of electrocautery due to the risk of sparking a fire. Once the pneumonectomy has been performed, the specimen is carried off the field and sent to pathology for permanent fixation and sectioning. Once cautery is completed, the FiO2 can then be increased once more, if the patient is not on bypass or ECMO.
Only gold members can continue reading. Log In or Register to continue

Tags: Anesthesia and Perioperative Care for Organ Transplantation
Jul 9, 2017 | Posted by admin in Uncategorized | Comments Off on Bilateral Sequential Lung Transplantation: What the Anesthesiologist Needs to Know About the Surgical Approach
Premium Wordpress Themes by UFO Themes
WordPress theme by UFO themes