1. Heart. SNS and PNS innervation of the heart (via the stellate ganglion) influences heart rate (chronotropism), the strength of contraction (inotropism), and coronary blood flow. 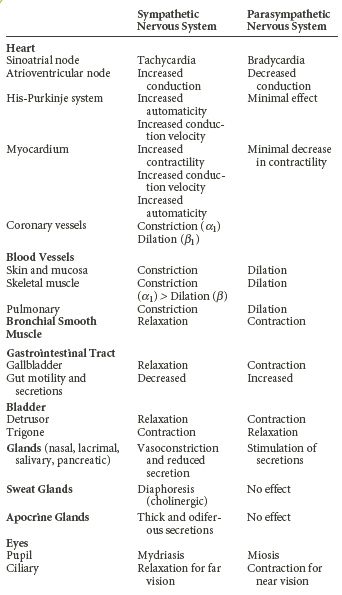 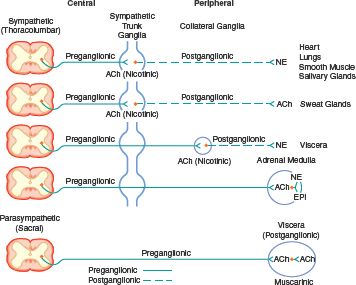 b. The SNS has the same supraventricular distribution as the PNS but with stronger distribution to the ventricles. Normal SNS tone maintains contractility about 20% above that in the absence of SNS stimulation.

2. Peripheral circulation. The SNS is the most important regulator of the peripheral circulation. Basal ANS tone maintains arteriolar diameter at about 50% of maximum, thus permitting the potential for further vasoconstriction or vasodilation. By functioning as a reservoir for about 80% of the blood volume, small changes in venous capacitance produced by SNS-mediated venoconstriction produce large changes in venous return.

A. Transmission of impulses across the nerve terminal junctional sites (synaptic cleft) of the peripheral ANS occurs through the mediation of liberated chemicals (neurotransmitters). These neurotransmitters interact with a receptor on the end organ to evoke a biologic response.

2. The ability of a receptor to modulate the function of an effector organ depends on rapid recovery to its baseline state after stimulation. ACh removal occurs by rapid hydrolysis by acetylcholinesterase (true cholinesterase). Pseudocholinesterase (plasma cholinesterase) is not physiologically significant in the termination (hydrolysis) of ACh action.

a. Adenosine triphosphate (ATP) is released with norepinephrine and thus functions as a co-neurotransmitter.

b. Epinephrine is the principal hormone released by chromaffin cells (which function as postganglionic SNS neurons) into the circulation to function as a neurotransmitter hormone.

a. Endogenous catecholamines are dopamine (neurotransmitter in the CNS), norepinephrine, and epinephrine. A catecholamine (including synthetic catecholamines) is any compound with a catechol nucleus (benzene ring with two adjacent hydroxyl groups) and an amine-containing side chain (Fig. 15-3).

b. The effects of endogenous or synthetic catecholamines on adrenergic receptors can be indirect (little intrinsic activity but stimulate release of stored neurotransmitter) and direct.

3. Inactivation of catecholamines is by reuptake back into presynaptic nerve terminals by extraneuronal uptake, diffusion, and metabolism.

III. RECEPTORS. Receptors appear to be protein macromolecules on cell membranes, which when activated by an agonist (ACh or norepinephrine) lead to a response by an effector cell. An antagonist is a substance that attaches to the receptor (prevents access of an agonist) but does not elicit a response by the effector cell. 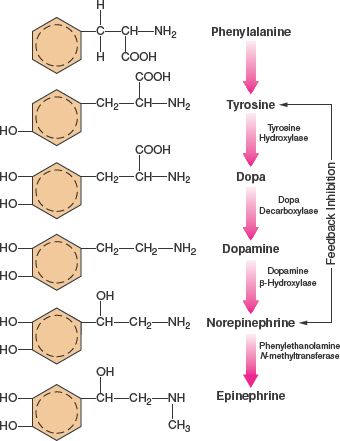 B. Adrenergic receptors are subdivided into α, β, and dopaminergic, with subtypes for each category (Table 15-2).

1. α-Adrenergic Receptors in the Cardiovascular System

3. β Receptors in the Cardiovascular System

2. Alteration in the number or density of receptors is referred to as upregulation or downregulation. Chronic treatment with clonidine or propranolol results in upregulation and a withdrawal syndrome if the drug is acutely discontinued.

FIGURE 15-4. Blood pressure and heart rate response to a Valsalva maneuver (A, normal; B, abnormal in a patient with cervical quadriplegia). 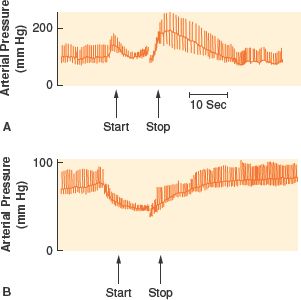 A. Baroreceptors located in the carotid sinus and aortic arch react to alterations in stretch caused by changes in blood pressure (Fig. 15-4). Volatile anesthetics interfere with baroreceptor function; thus, anesthetic-induced decreases in blood pressure may not evoke changes in heart rate. Compliance of stretch receptors and their sensitivity may be altered by carotid sinus atherosclerosis. (Carotid artery disease may be a source of hypertension rather than a result.)

V. CLINICAL AUTONOMIC NERVOUS SYSTEM PHARMACOLOGY. Drugs that modify ANS activity can be classified by their site of action and the mechanism of action or pathology (antihypertensives) for which they are administered.

A. Cholinergic Drugs. Muscarinic agonists act at sites in the body where ACh is the neurotransmitter.

B. Cholinergic Drugs. Muscarinic antagonist refers to a specific drug action for which the term anticholinergic is often used (any drug that interferes with the action of ACh as a transmitter). Anticholinergic drugs (atropine, scopolamine, glycopyrrolate) interfere with the muscarinic actions of ACh by competitive inhibition of cholinergic postganglionic nerves.

1. There are marked variations in sensitivity to anticholinergic drugs at different muscarinic sites.

2. Central anticholinergic syndrome is characterized by symptoms that range from sedation to delirium, presumably reflecting inhibition of muscarinic receptors in the CNS by anticholinergics (this is unlikely with glycopyrrolate, which cannot easily cross the blood–brain barrier). Treatment is with physostigmine. Its tertiary amine structure allows it to cross the blood–brain barrier rapidly; other anticholinesterases are quaternary ammonium compounds that lack the lipid solubility necessary to gain prompt entrance into the CNS.

C. Sympathomimetic Drugs. Catecholamines and sympathomimetic drugs continue to be the pharmacologic mainstay of cardiovascular support for the low-flow state (Table 15-3). It is necessary to become familiar with only a few drugs to manage most clinical situations (Table 15-4). Low-output syndrome is present when an individual has abnormalities of the heart, blood volume, or blood flow distribution. When low-output syndrome is present for more than 1 hour, it usually reflects all three abnormalities. 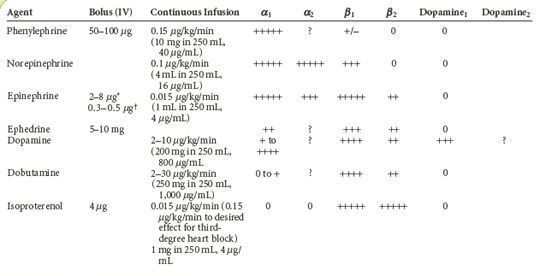