Historically, vasopressors and inotropes have been used to improve global markers of hypoperfusion. Recent advances in tissue perfusion monitoring and use of biomarkers have expanded both the targeted goals of resuscitation and, consequently, the range of clinical scenarios in which vasoactive agents are employed. As our understanding of the physiologic response to shock states improves, tailoring resuscitative therapy to specific clinical scenarios and individual patients will become feasible. 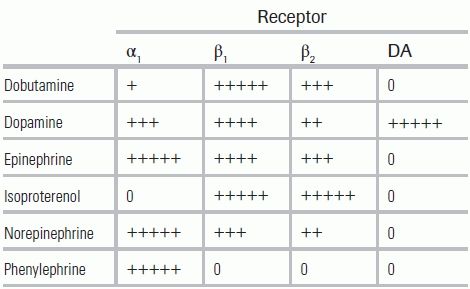 Norepinephrine is recommended as the first-line vasopressor for septic shock once volume resuscitation has been achieved and for severe cardiogenic shock. It causes potent vasoconstriction with a corresponding increase in systolic, diastolic, and pulse pressure and has minimal net impact on cardiac output and heart rate. Coronary perfusion is augmented by elevated diastolic blood pressure and indirect release of local vasodilators.1 Prolonged use of exogenous norepinephrine can have direct toxic effects on cardiac myocytes (see Table 32.2).2 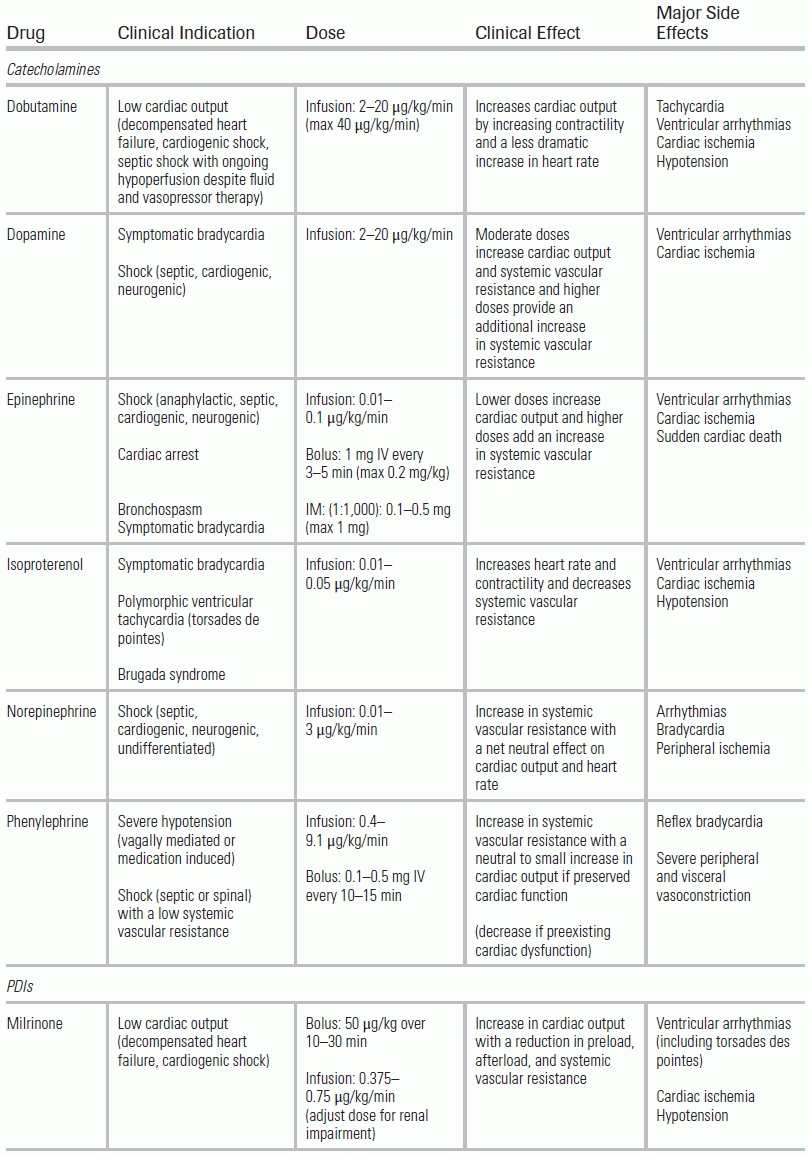 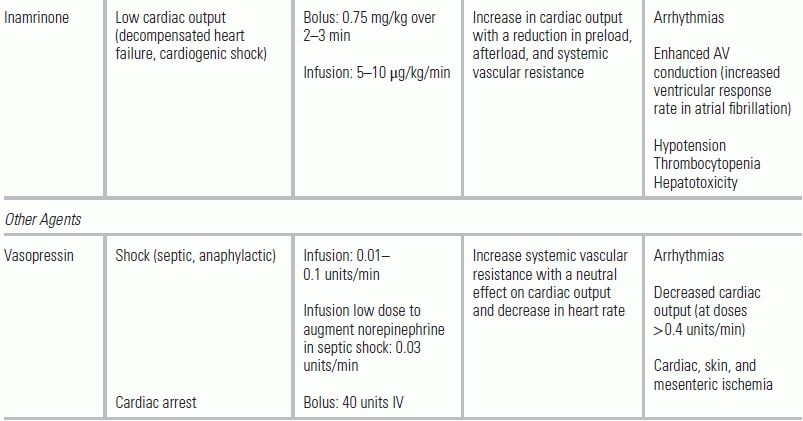 Epinephrine is recommended as the first-line vasopressor for cardiac arrest and anaphylaxis and as a second-line agent for septic shock. At low doses, epinephrine stimulates beta-1 receptors, subsequently increasing cardiac output by augmenting cardiac contractility and heart rate. Peripherally, epinephrine’s alpha-1 and beta-2 stimulation offset. Epinephrine enhances coronary blood flow by dilating coronary vessels and increasing diastolic blood pressure.3 At higher doses, epinephrine produces potent alpha-adrenergic stimulation, in addition to the increase in cardiac output, leading to peripheral vasoconstriction and an increase in systemic vascular resistance. Prolonged use of epinephrine can cause cardiac dysrhythmias and direct cardiac toxicity. Epinephrine also produces splanchnic vasoconstriction—to a greater degree than equipotent doses of norepinephrine and dopamine—although the clinical importance of this feature is unknown.

Dopamine is recommended for symptomatic bradycardia unresponsive to atropine and as a second-line agent for septic shock in patients who are at a low risk for dysrhythmias. Additionally, dopamine is an alternative to norepinephrine in patients with acute decompensated heart failure who have persistent hypotension and corresponding end-organ dysfunction. All patients receiving dopamine should be monitored for cardiac dysrhythmias; therapy should be discontinued if dysrhythmia is present.

When administered therapeutically, dopamine acts on dopaminergic and adrenergic receptors to elicit a multitude of distinct clinical effects, depending on the dose given. At lower doses (0.5 to 3 mcg/kg/min), dopamine causes selective vasodilation of the renal, mesenteric, cerebral, and coronary vascular beds through its action on dopamine receptors. Note that when dopamine is used at these low doses, hypotension can occur.4 The clinical benefit of this “renal dose” dopamine has not been demonstrated, and use for renal protection is not recommended.5 At moderate doses (3 to 10 mcg/kg/min), dopamine predominantly stimulates beta-1 adrenergic receptors, augmenting cardiac output by increasing stroke volume and, somewhat variably, heart rate. Systemic vascular resistance is minimally elevated, and the overall effect is an increase in mean arterial pressure (MAP). At higher doses (>10 mcg/kg/min), stimulation of alpha-adrenergic receptors dominates, leading to vasoconstriction and increased systemic vascular resistance. Note that higher doses of dopamine can result in rapid development of tachyphylaxis.

Vasopressin and its analog, terlipressin, are used primarily as second-line agents for refractory vasodilatory shock that is poorly responsive to epinephrine. In addition, sepsis management guidelines indicate that low-dose vasopressin can be added to norepinephrine, either to increase MAP or to decrease the required dose of norepinephrine. Vasopressin use as a single agent for septic shock, however, is not recommended.5 Vasopressin is a nonadrenergic peripheral vasoconstrictor that acts on V1 and V2 receptors, located in vascular smooth muscle and the renal collecting system, respectively. Administration of vasopressin causes marked vasoconstriction and increased systemic vascular resistance, with a neutral effect on cardiac output and a decrease in heart rate.6 Potential advantages of vasopressin include less direct cerebral vasoconstriction than with the use of catecholamines and relatively preserved vasopressor effects during hypoxemic and acidemic conditions. A fixed dose of vasopressin at 0.03 units/min is recommended; higher doses, while potentially more effective at restoring blood pressure, have been associated with coronary and mesenteric ischemia and skin necrosis.5,7,8 Since rapid withdrawal from vasopressin can result in rebound hypotension, a slow taper of 0.01 units/min every 30 minutes should be employed.

Phenylephrine is used in patients suffering severe hypotension with a low systemic vascular resistance (SVR <700 dynes × sec/cm5), as seen in hyperdynamic sepsis and traumatic neurogenic shock. International sepsis guidelines, however, do not recommend phenylephrine unless other combinations of vasopressors are ineffective or cannot be used due to serious dysrhythmias.9 Phenylephrine is also recommended in patients with severe aortic stenosis and significant hypotension or to decrease the outflow tract gradient in patients with obstructive hypertrophic cardiomyopathy. In the setting of anesthetic or other iatrogenic-induced hypotension, bolus administration is often used for rapid blood pressure correction.

Phenylephrine causes potent vasoconstriction and a rise in systemic vascular resistance through alpha-adrenergic receptor activation. It produces almost no stimulation of beta-adrenergic receptors, and as a result, cardiac stroke volume may be decreased.10 Severe peripheral and visceral vasoconstriction can occur, and phenylephrine is contraindicated in patients with an elevated systemic vascular resistance (>1,200 dyne × sec/cm5).

Dobutamine is primarily used for three indications: (a) acute decompensated heart failure due to systolic dysfunction with signs of hypoperfusion and mild to moderate hypotension; (b) low-output cardiogenic shock, most often secondary to an acute myocardial infarction; and (c) septic shock patients who have ongoing signs of hypoperfusion despite appropriate fluid resuscitation and vasopressors. Surviving Sepsis Campaign Guidelines specifically recommend a trial of dobutamine for patients with myocardial dysfunction (demonstrated by an elevated cardiac filling pressure and persistently low cardiac output) or for patients with ongoing signs of hypoperfusion (e.g., low ScVO2 or high lactate) despite adequate intravascular volume and MAP.5

Dobutamine primarily stimulates beta-1 adrenergic receptors, which leads to increased inotropy and moderately increased chronotropy. The result is a rise in cardiac output. At low doses, ≤5 mcg/kg/min, dobutamine also produces beta-2 and mild alpha-1 receptor stimulation, which leads to a mild net peripheral vasodilation. Higher doses of 5 to 15 mcg/kg/min have a minimal net effect on systemic vascular resistance, and at doses >15 mcg/kg/min, alpha-medicated vasoconstriction predominates peripherally—in addition to the primary effect of beta-1 stimulation. Even at low doses, dobutamine markedly increases myocardial oxygen consumption, and myocardial ischemia may result. Furthermore, dobutamine can lead to critical dysrhythmias. Likely as a result of these adverse side effects, dobutamine has never been demonstrated to decrease mortality in heart failure patients.11 It does, however, remain first-line therapy in low-output cardiogenic shock patients when inotropy is required.12

Milrinone and inamrinone are used comparably to dobutamine in patients with acute decompensated heart failure due to systolic dysfunction with signs of hypoperfusion and mild to moderate hypotension and in patients with low-output cardiogenic shock. These agents, termed phosphodiesterase inhibitors (PDIs), act by blocking an enzyme that degrades cAMP in the cell, augmenting myocardial contractility, systemic vasodilation, and diastolic relaxation. The net clinical effect is a rise in cardiac output with a reduction in preload, afterload, and systemic vascular resistance. Milrinone is the most commonly used parenteral PDI, due in part to inamrinone’s significant side effects, including dose-related thrombocytopenia. To date, PDIs have not been shown to improve mortality in acute decompensated heart failure or cardiogenic shock.13 PDIs are second-line inotropic agents in most emergency settings, but may be considered in cases where dobutamine is not effective due to downregulation or desensitization of adrenergic receptors, as seen in (1) chronic heart failure patients, (2) chronic beta-agonist administration, or (3) outpatient beta-antagonist therapy.

Isoproterenol is infrequently administered; its use is primarily limited to second-line therapy for symptomatic bradycardia. It can be considered, however, for patients with polymorphic ventricular tachycardia, specifically for torsades de pointes associated with bradycardia and drug-induced QT prolongation, or Brugada syndrome. Isoproterenol should be avoided in polymorphic ventricular tachycardia associated with familial long QT syndrome.14 Through its isolated beta-adrenergic stimulation, isoproterenol causes increased heart rate and contractility and decreased systemic vascular resistance.

Calcium sensitizers (e.g., levosimendan) are not approved for use in the United States, but are used in multiple other countries for acute decompensated heart failure. They act by increasing the responsiveness of contractile proteins to calcium without increasing intracellular calcium levels and by opening adenosine triphosphate–dependent potassium channels. Clinically, this leads to increased myocardial contractility, arteriolar and venous dilation, and preserved diastolic relaxation. The result is increased cardiac output and decreased preload, afterload, and systemic vascular resistance.15 Studies of levosimendan have not demonstrated a consistent mortality or other major outcome benefit when compared to dobutamine or placebo.16,17

The majority of patients suffering shock in the emergency department are undifferentiated (e.g., septic shock vs. cardiogenic shock) at the time of their arrival. Caring for these patients requires immediate intervention to restore perfusion to critical organs and rapid identification of the underlying etiology of the patient’s illness. In patients who do not present with obvious signs of pulmonary edema, initial resuscitation focuses on rapid fluid administration to restore intravascular volume. If patients continue to display signs of shock following adequate fluid resuscitation, vasoactive agents should be initiated. Generally, vasopressors are indicated if the MAP is <60 mm Hg or the systolic blood pressure is >30 mm Hg below baseline in patients with signs of end-organ dysfunction due to hypoperfusion. In patients with severe hypotension and impending cardiopulmonary arrest, it is appropriate to begin vasopressors concurrently with fluid administration.

For patients presenting with undifferentiated or septic shock, norepinephrine is recommended as first-line therapy. Meta-analysis of six studies comparing norepinephrine to dopamine in septic shock patients demonstrated a modest improvement in survival in the norepinephrine group and an increase in cardiac dysrhythmias in the dopamine cohort.18–23 In contrast, multiple studies comparing benefits of other vasopressors in shock states have demonstrated equivalence in terms of mortality and length of stay.9,24–34

An estimate of cardiac output can help to guide therapy in patients that remain hypotensive despite norepinephrine administration. If cardiac output is persistently low (i.e., “cold shock”), dobutamine should be added as a second agent or therapy switched to epinephrine to improve cardiac performance.35 If cardiac output is normal or high (i.e., “warm shock”), vasopressin or phenylephrine can be added to norepinephrine therapy. Phenylephrine is also appropriate for patients who have significant tachycardia or dysrhythmias that preclude the use of norepinephrine or other agents with beta-adrenergic activity. Patients unresponsive to two vasopressors rarely benefit from the addition of a third. Instead, switching to alternative vasopressors is recommended.

If other forms of shock are suspected, the choice of vasoactive agent should be tailored appropriately. In cardiogenic shock patients, norepinephrine is the preferred initial agent if patients are significantly hypotensive (systolic blood pressure <80 mm Hg). In patients who respond to norepinephrine or whose systolic blood pressure is low but >80 mm Hg, a trial of dobutamine is indicated. Anaphylactic shock should be treated with epinephrine, while patients with neurogenic shock due to spinal cord injury should be treated with an agent that has both alpha-1 and beta-1 adrenergic activities (e.g., norepinephrine, epinephrine, dopamine).36 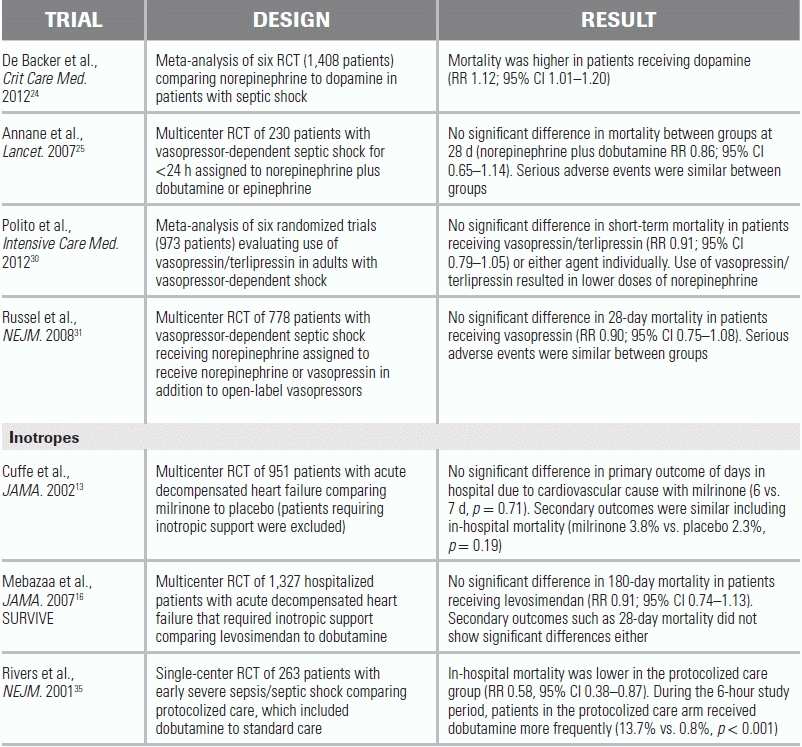